Premiering on Sunday, November 13th, on AMC’s The Walking Dead, Episode Service was another embarrassing atrocity for Rick and his group, this time back at their home. Negan and a decent size of his Saviors show up early to Alexandria for their first “offering.” While they tear through every home for supplies, Negan consistently taunts Rick, a painful sight to watch. While Rick struggles to cooperate, he also has to deal with those who still want to fight back. 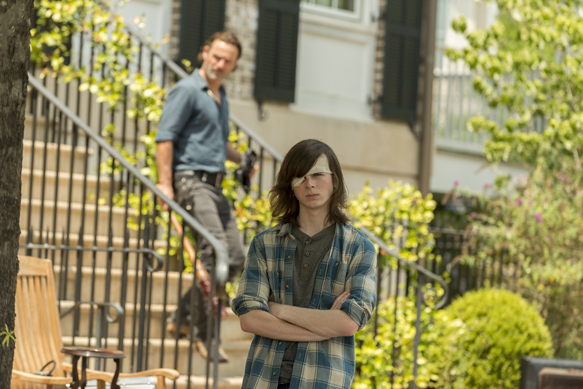 The tension set high from the very beginning, Negan makes his presence known to the rest of the Alexandrians. Things get heated when Olivia’s life is threatened, a result of two missing handguns from the infirmary. Luckily, Rick narrows the location down to Spencers home, as he and Rosita were not within the camp. He finds the hidden stash in an air vent and avoids another casualty. Before the Saviors arrival, Michonne sneaks out with a hidden sniper rifle, practicing some shots on a walker. She unfortunately misses her intended target, her skill set better with a sword. One of her shots grazes a deer, which normally would call for a celebration, but it is short-lived when Rick convinces her to give up the game as well as the rifle. With so much lost already, its still hard to imagine Rick submitting to Negan, but keeping everyone in line could be a more difficult feat.

Service was a hard episode to swallow, with Negan continuously beating Rick down mentally. He was overly charismatic, but never short of threats to keep Rick obedient, forcing him to hold his bat Lucille. Rick stays on his best behavior throughout the taxing procedure, and pleads with his community to do the same. Although Rick chooses submission, there are those who still want to fight. Ironically, in the midst of his darkest moments, Father Gabriel still holds an utmost faith in Rick, assuring they will get through the day, as well as the days to come. He showed some quick thinking by hiding Maggie, digging an empty grave to fool Negan, who was genuinely disappointed. Hopefully, his motivation will push Rick to eventually fight back.

Sensing disapproval from Michonne, Rick reveals old demons regarding Shane and Judith, a shocking bombshell not heard by fans since Season two. It is a true sensibility that shows how vulnerable Rick currently is. Like Negan’s shadow, Dwight puts on his own show, targeting Rosita, forcing her and Spencer to retrieve Daryl’s bike. Now knowing his story, its hard to accept Dwight is enjoying his new life, and yet he seems to carry on with ease. 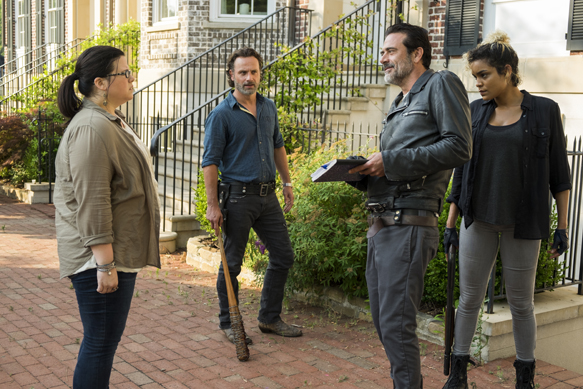 In between the stealing and the insults, there were random moments of tribute, a salute to the loved ones lost. Enid asked to keep green balloons, a reminder of a memory of Glenn, and it was no mistake that Negan chose an orange soda to quench his thirst, a present intended for Tara from Denise, shortly before her life was suddenly taken. No cast members died this episode, but Michonne’s deer kill could not help but feel somewhat tragic. An accidental target, its hopefully not a foreshadow of another innocent life taken too soon.

There were quite a few cinematic scenes worth mentioning throughout the episode directed by David Boyd. Fans got a reminder of when the main characters first arrived to Alexandria when one of the Saviors found the video camera that recorded everyone’s confessions. The shot of Negan filming the current Rick was a showy display, mocking him of his transition from the man he used to be. A background display towards the end of Service that a lot of fans noticed was the morse code banner hung up in Ricks house. There is a strong theory this method of communication was used between Rick and Daryl, something fans hope to prove true in future episodes. After the Saviors finally left, and Rick is forced to watch Daryl be taken once again, their own sign outside the gate now stands as a mockery, “Mercy for the Lost, Vengeance for the Plunderer’s.”

As frustrating as the current situation is, a large portion of the audience still cannot help but have a liking towards Negan. His taunting charisma tickles most fans, fitting into the ultimate villain role the show has displayed thus far. On the other hand, other viewers may find Negan to be a little too much and at times a bit over the top. That is up to the viewer of course though. As painful as Rick’s situation is, fans need to remember that the Alexandrians did not take a liking to him right away, feeling threatened by his presence. Spencer lost his entire family after his arrival, somewhat justifying his selfish actions. Negan isn’t the first to threaten Rick, but he is the first to get under his skin, and it may be frustrating for fans, but it almost seems that Rick feels he deserves this torment. With those who still want to fight back, tension will surely rise, and it will be exciting when the other camps involved with The Saviors all realize their common interest. CrypticRock gives Service 4.5 out of 5 stars. 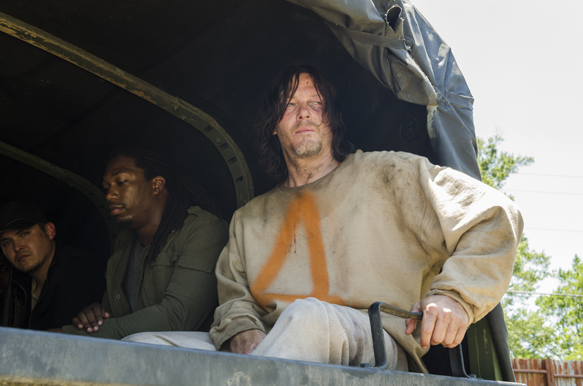