Premiering on Sunday, December 4, 2016, AMC’s The Walking Dead episode Sing Me a Song gave viewers a closer look within The Sanctuary and its politics. It sent a deeper message of Negan’s power and how it is effecting his own followers. Outside, members of Alexandria scout for supplies, each one having a slightly different agenda. As the mid season finale closes in, tension is only getting higher as Negan continues to be a thorn in everyone’s side. 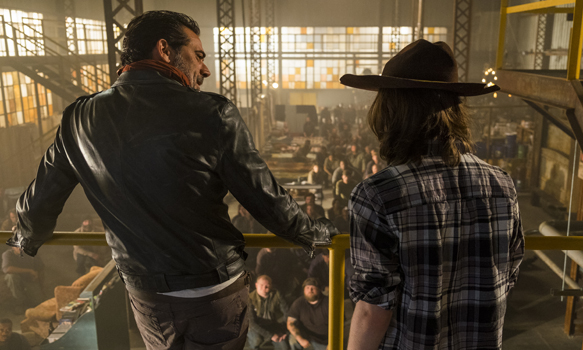 Turning back to the episode Go Getters, it wrapped up with Jesus secretly hitching a ride with The Saviors to find their camp, then realizing Carl beat him to it. As they get closer, Jesus advises to jump out and follow on foot. Carl asks him to go first to show him how to roll out of a moving vehicle, a false claim, Jesus realizes after the fact. Carl’s suicide mission to kill Negan takes an odd turn, as he takes a liking to the boy and shows him around The Sanctuary. After a while, he returns Carl to Alexandria, expecting the same treatment in return.

Back in Alexandria, a few members split up with their own goals in mind. Rick and Aaron go out scouting for Negan, and come across an area that shows promise, but not short of dangers. Father Gabriel attempts to venture out with Spencer, but cannot stand his constant banter against Rick, and leaves him with his thoughts.

Using their own tactics against them, Michonne creates a roadblock with Walkers, capturing a Savior traveling alone, and demands to be taken directly to Negan. Rosita challenges Eugene to help with their situation, as opposed to quivering back in his usual coward self. Bringing back up the idea of making bullets, he reluctantly does what she asks, making a single bullet that she hopes to put to good use. Upon returning, they realize The Saviors, along with Negan, are within their camp, and Rosita may put a plan to action sooner than she expected. 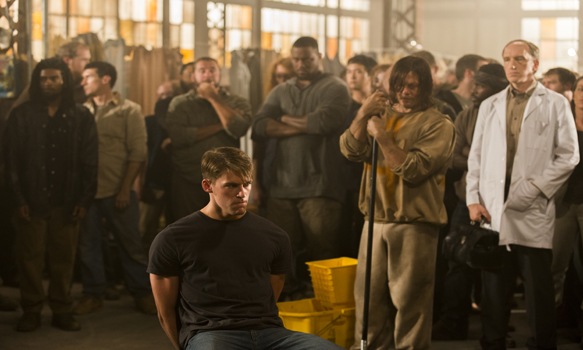 The main plot was an interesting turn of events, Negan showing a softer side, but never without his usual charm. His newly developed relationship with Carl really raised eyebrows, constantly questioning Negan’s every move. It is a very “keep your friends close and your enemies closer” vibe, an interesting twist in the storyline. To further the drama, many different characters having their own agendas should cause some nail-biting moments in the near future. Crossing enemy lines is surely a start, but the group not working together could cause more problems than accomplishments. A visionary aspect to display the divide was the brief car ride shared between Father Gabriel and Spencer, a very subtle, but powerful message.

Throughout Negan and Carl’s “heart to heart,” there was always an awkward moment, using every attempt to humiliate Carl, but having a genuine interest in him as well. Carl singing to Negan was like pouring salt on an open wound, Negan taking practice swings with Lucille while listening to a squeaky version of “You Are My Sunshine,” a song that couldn’t be any more lyrically inappropriate. The focus from Carl did fade from time to time, Negan never short of insults for anyone in his presence. He obviously still tortures Dwight with affection towards his wife Sherry, a surreal moment for them as they question their recent decisions.

Dwight, in Negan’s words, got a little “déjà vu” when one of the Saviors got caught sleeping with one of his wives. Greg Nicotero and his team used only makeup and a specially made prop iron to complete this scene, certainly giving viewers a gruesome and cringing few seconds. Griffin Freeman, who played the burn victim Max, claims that he possibly frightened neighbors, as he practiced screams and gasping noises for this scene in his own home. The opening shot was a brilliant reminiscence of Michonne’s old self, two walkers following her shoulder width apart, much like her original “companions” seen in season’s 2 and 3. For the expanded shot and official introduction of The Sanctuary, fans should take a closer look at the spiked heads, one of them modeled to resemble Nicotero. 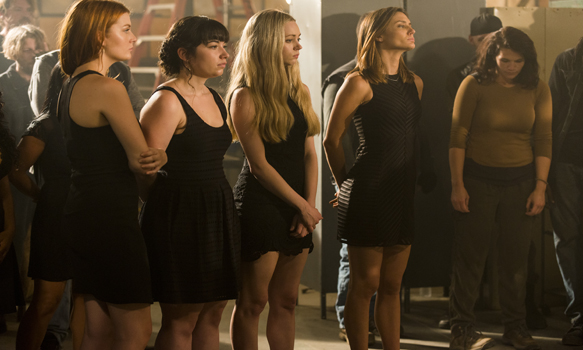 In preparation for the mid season finale, it is very difficult to predict what will happen next. Negan has proven to be a vicious sociopath, enforcing strict rules and tearing apart other people’s feelings. His latest visit to Alexandria surely has everyone on edge, gently rocking Judith to sleep while he waits for Ricks return. With Carl’s suicide mission a failure, Michonne and Rosita’s next move could prove to leave the group in a worse situation. Back at The Sanctuary, Daryl notices Jesus sneaking around, raising even more questions on what their plans could be, as well as whether or not they are getting more help from the inside. Then there is Rick, currently out with Aaron, scouting for supplies, hopeful for some luck at a boat house. Of course getting across will be no easy feat, but that still could be an easier challenge to handle as opposed to seeing Negan sitting on his porch with Carl and Judith.

With the last episode of 2016, titled Hearts Still Beating, airing on December 11th, fans are sure to chew their nails raw for the 90 minute midseason finale. Until then, CrypticRock gives Sing Me a Song 5 out of 5 stars. 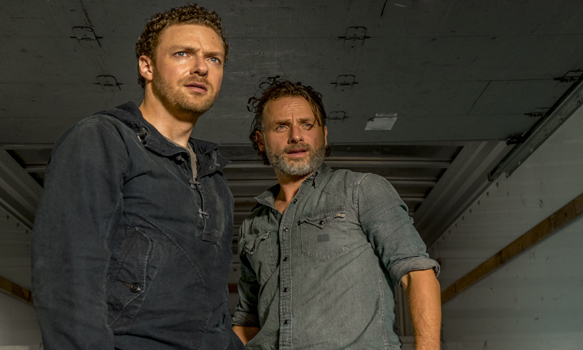