On the latest installment of AMC’s The Walking Dead, The Cell, which aired on Sunday, November 6th, a lot was revealed on Negan’s camp, known as The Sanctuary, where he is currently holding Daryl hostage. There is also more insight on Dwight and what has changed from when he first met Daryl back in Season 6. As he spends his days torturing Daryl, it is a true test of strength for both of them, as Dwight appears not to be as content with his current situation as he may let on. 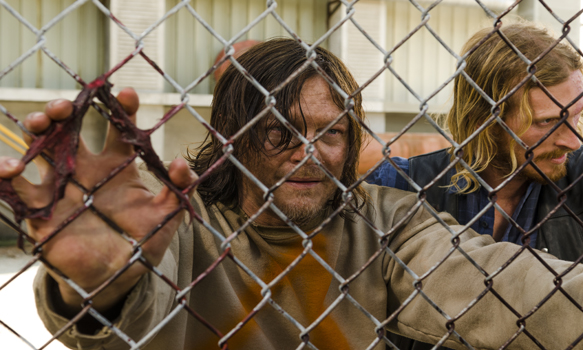 The polar opposite of last weeks The Well, the latest episode directed by Alrick Riley gave the audience its first glance of The Sanctuary. Dwight starting his day with rerun tapes of Who’s The Boss?, he displays his rank by making a sandwich of significant quality seen in a post apocalyptic world. He achieves the fresh ingredients by cutting lines and even having first dibs on dead mens’ belongings. His rank is pretty clear, displaying how Negan is “taking care” of him.

Part of his daily duties is tending to Daryl, psychologically torturing him in attempt to break him down to fall in line and join The Saviors. Despite his best efforts, Daryl proves to be a challenging subject, forcing Dwight to question his own choices. Negan is surprisingly intrigued by Daryl’s resilience, but it is too early to know what that exactly means for the beloved character.

Even though there was a lot of focus on Daryl, the story mainly revolved around Dwight. A lot has changed since their first meet back in Episode 606, Always Accountable, he and his wife Sherry paying a hefty price for running away. Dwight appears content as one of Negan’s top guys, but loses his thoughts from time to time with the walkers surrounding The Sanctuary. Two that were focused in the episode were members of The Saviors, symbolizing no escape, even in death. Another in the beginning is held in place by a stake, angled in a way that forces the walker to kneel, a gesture expected by everyone in Negan’s presence. It was a brilliant metaphor written into the episode that helped carry the story. 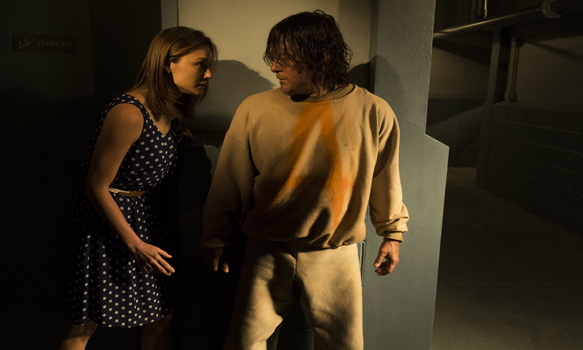 The treatment of Daryl was torturous, locked in a windowless room and forced to listen to an annoyingly upbeat song by Collapsible Hearts Club titled “Easy Street.” The dog food sandwiches were not nearly as extreme as leaving Daryl a photo of Glenn’s mutilated body, now part of the collection that Glenn himself saw back when he made his first human kill in Episode 612, Not Tomorrow Yet. Dwight switches the melody to the very appropriate “Crying” by Roy Orbison, and that moment with Daryl is heart-wrenching. His refusal to give in and join The Saviors shows strength in one aspect, but he also seems to accept death as punishment for his guilt.

Another great feature The Walking Dead crew has perfected by this point is ambiance. While Dwight was on the road in attempt to capture the runaway Gordon, there was a side story told only in visuals. A peculiar sight under a bridge, clearly a car crashed through the wall above, leaving a hole open for walkers to carelessly plummet to the ground below. Most of them lay broken and tattered, but as usual, the unforgiving virus did not stop their hunger for Dwight. The “walker wall” surrounding The Sanctuary was a very unwelcoming additive to the camp. Fans should rewind and take note of the singular heads a top the spikes, remote controlled to move, an old detail seen in earlier episodes.

The Cell was a perfectly placed chapter in the season, just about every detail a mirror image of previous weeks The Well. Its clever storytelling on the writers’ behalf, not always needing action-packed scenes to make a great show. Highlighting Dwight was smart, as he is supposed to become a key character in future episodes, according to Comic readers. His development, as well as other new characters, has been a great addition thus far, and it will be exciting to see what they all bring to the table. CrypticRock gives The Cell 4 out of 5 stars. 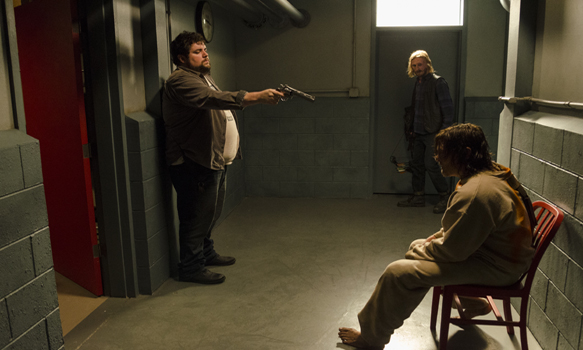