Following one of the most exciting The Walking Dead episodes ever when season 6 returned with No Way Out, fans were anxious to see where the pieces would be picked up upon the airing of The New World Sunday, February 21st. Many wondered if the action-packed approach would continue or if the team behind The Walking Dead would slow the pace down once again. 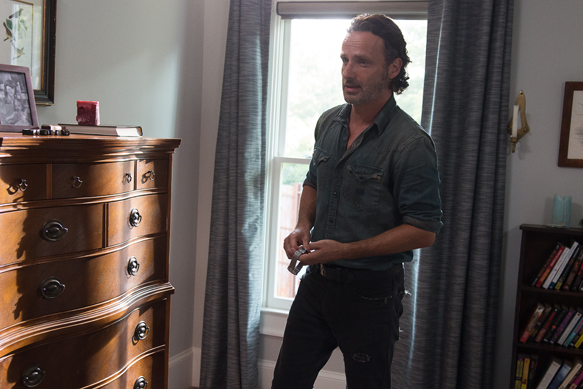 With that in mind, The New World begins a few weeks after the chaos with the Walkers invading Alexandria in No Way Out, and everything seems to be back to some sort of normalcy. Carl is alive and well, his wound patched up, while Michonne and Rick’s biggest worry of the day is toothpaste, along with food, and other supplies. As a result, Rick and Daryl head out to scout the area, and luckily find a truck filled with useful products. While distracted, a stranger pummels into them, claiming to be running from Walkers. He bears a friendly face, but many know that in a post apocalyptic world, no one can be trusted. This soon proves true, as the stranger, known as Jesus, is able to steal their newly found lot, using a little theatrics as a ruse. Being the badass duo that they are, Rick and Daryl catch up to the thief to claims what is theirs. The man gives chase, which leads to the truck getting lost to everyone and Jesus getting knocked out cold. Curious of his story, Rick suggests they bring him back to Alexandria for interrogation.

Meanwhile, back at Alexandria, on watch at the guard post, Michonne notices Spencer wander into the woods with weapons and a shovel. She goes to follow him into the woods to see what he is up to. When questioned, Spencer reveals nothing except, through his eyes, he is aimed on a mission. At the same time, Carl and Enid are back to their old tricks of hopping the town wall for freedom in the outside world. Interestingly, Enid’s point of view seems to have changed as she confesses to Carl she no longer wants to partake in such dangerous activity. As for the mystery behind Spencer’s exploration, with the help of Carl and Michonne, he finally put his family to rest. 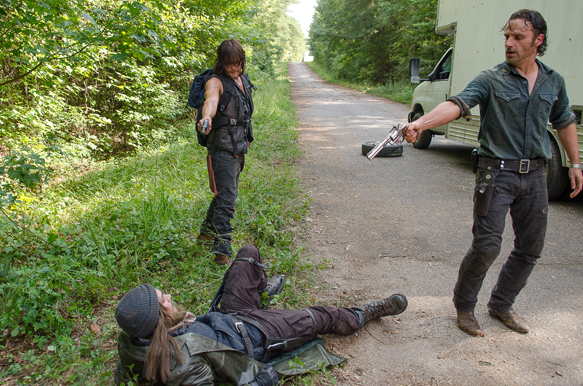 After an explosive return with No Way Out, things slowed down in The New World, introducing a new character who could steer our characters in a different direction. Those who are up to date with the Comic will be sure to have certain expectations on what is to come. Besides a new character, this episode revolved around some fairly new relationships – Tara and Denise are apparently living together, Carl and Enid spend their days outside the wall, and who does not love the bromance between Rick and Daryl? However, the big topic of the week will definitely be Rick and Michonne, getting close and personal, a moment that came as a refreshing surprise. Danai Gurira later expressed that she is relieved this episode aired, as fans can stop housing her on hooking up with Rick. It will be exciting to see where this chapter will take them, as well as everyone else’s.

From one episode to the next, an interesting detail was not experiencing the healing process of Carl, who did not seem to skip a beat. As a boy in season 2, audiences watched him get shot through the chest, which led the group at the time to the farm, where Carl was on bed rest for several weeks. It is possible the writers chose to skip that segment this time and move on to more storytelling, as Carl is a whole different person this time around. Older and wiser, he was a wonderful source of reason to Michonne as to why he chose to help out Spencer. It was a truly touching moment, and another reminder of how much Carl has truly grown.

Filled with romance and comedy, The New World was an enjoyable episode filled with new storyline to keep The Walking Dead going strong. It was nice to see the characters laugh and build relationships, as opposed to fighting for their lives and struggling to make ends meet. The introduction of Jesus is intriguing, as he is a constant pain in Rick’s behind, but does not seem threatening. As usual, fans will have to wait and see what the world of The Walking Dead will bring next with Knots Unite on Sunday, February 28th. CrypticRock gives The New World 4 out of 5 stars. 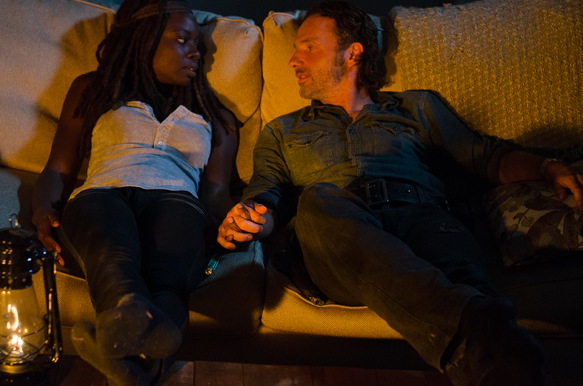