Viewers were hanging after last week’s events of Carol and Maggie’s capture on The Walking Dead’s Not Tomorrow Yet. This week’s episode, entitled The Same Boat, displayed a chess game between Carol, Maggie, and a few members of the Saviors. It was a brilliant performance among women, showing strength, wit, and ambition. After the raid from Rick’s group, Carol and Maggie are taken hostage by a few others who were on the outside perimeter. Rick attempts a trade, being they have one of their own, Primo. The leader of the small group, Paula (Alicia Witt: Nashville TV series, 88 Minutes 2007), opts to buy time and calls for backup, while they wait at another base, previously a slaughterhouse. 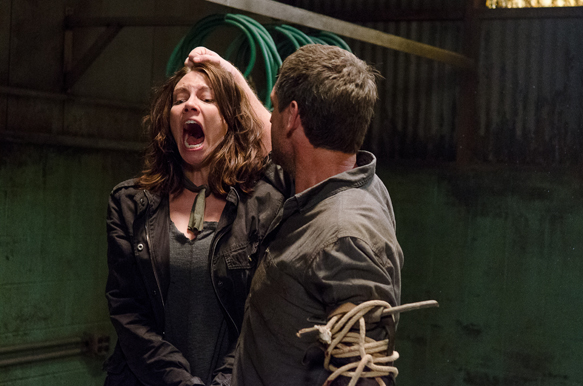 Once they settle in, both parties begin planning strategies. Their base, which has not been checked in about a month, is overrun with Walkers. The few members, consisting of Donnie (Rus Blackwell: Monster 2003, Ant-Man 2015), Molly (Jill Jane Clements: The Hunger Games: Catching Fire 2013, Need For Speed 2014), Michelle (Jeananne Goossen: The Night Shift TV series, Alcatraz TV series), and Paula, have to constantly clear the halls before the other half of their group arrive. When a freshly killed Walker is dragged past Carol, a set of rosary beads gets snagged on her, which she immediately claims. A master of disguise, she puts on a show of being weak and timid, which the Saviors buy. After sharpening the metal edge, it becomes very useful as a tool for escape. She eventually gets her moment, as the group are constantly distracted.

Donnie, in agonizing pain after taking a bullet from Carol earlier, tries to take his frustrations out on her, which causes a scuffle with everyone. He gets knocked out by Paula, and she decides to separate the two hostages. While Michelle tries to pry information from Maggie, Carol reveals to Paula and Molly how they came to attack their group in the first place. After hearing everything, Paula reaches out to Rick to make the trade, but suspects foul play, and demands everyone to get ready for an ambush. Here, Carol is able to seize the moment for her and Maggie’s escape. She suggests to run, but Maggie refuses to allow their captors to live. 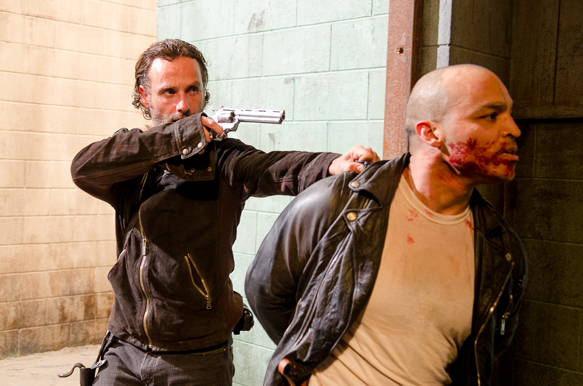 This was a monumental performance by Melissa McBride and Lauren Cohan, taking their characters on a pivotal turn. Ever since finding out about her pregnancy, Maggie has become more ruthless than ever, fighting for the sake of her family, but also realizing she cannot live this life much longer. It is curious on whether or not Michelle’s words will stick with her, claiming that her group were not the good guys.

The dialogue shared between McBride and Witt was the focal point of the episode, Paula being a mirror image that Carol was struggling not to become. During their escape, she begs Paula to run, which she refuses, accusing Carol and her group of taking everything from her. When she meets her demise, the upset look on Carol’s face is breathtakingly clear. It is a question on how much humanity she has left, but she is desperately trying to hold on to her faith, no matter how much blood she spills.

Once again, the makeup artists did not disappoint. Witt had a prosthetic piece on her cheek that was actually bitten off, and later, the effects were applied to the rest of her face, which made her unrecognizable. Those who missed it should go back and check out Donnie’s death scene. Dying from the infection caused by the bullet wound, his hand was various shades of purple and twice the size, proving that the crew pays attention to every detail.

With only three episodes left, it is getting down to the wire on what will become of our characters. The Saviors have already proven that they are not only ruthless, but organized. Fans  can only hope they do not let their guard down as their dealings with Negan’s group is far from over. CrypticRock gives The Walking Dead’s episode The Same Boat a 4 out of 5 stars. 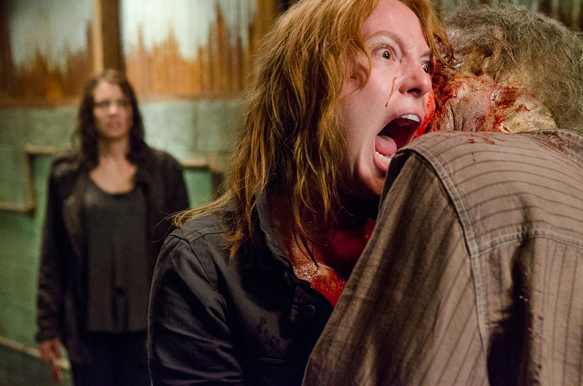