There is no shortage of things to talk about after this Sunday’s exhilarating episode of The Walking Dead titled “Too Far Gone”. Picking up shortly after we saw The Governor holding his pistol at Michonne the viewers witness the capturing of Michonne and Hershel, and his attempt to persuade his new camp of people to take up arms against the group at the prison. If anyone in this show can give a speech, it is The Governor. The authenticity of his demeanor throughout his speech is largely artificial, though we do not know that for sure until later in the episode when the groups clash and he shows his true colors, but it was a truly riveting speech. 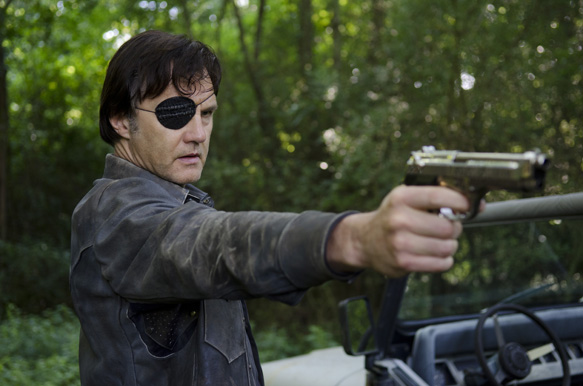 Though, perhaps even The Governor himself was not aware of his true motivations until forced to make a move. It is possible that he was able to convince himself that he had moved on from Penny and was only doing what seemed necessary to survive. The minute he pulled out Michonne’s sword and held it to Hershel’s neck was the minute everyone knew that he, in fact, was too far gone. He had only anticipated two outcomes to confronting the prison: Rick and his group would leave, or the group would be wiped out. It seemed as if he did not expect Rick to offer forgiveness and welcome The Governor and his camp into the fold, to try and create a workable living situation in which everyone wins. There was only one way he would get what he wanted—the prison group gone, one way or another—and that was to be the one to make a move.

Rick’s sudden forgiveness for The Governor, however, is suspect as well. Would he really allow such a psychopath to roam near where his children sleep? Furthermore, as Rick was so adamant about pointing out that the council controls things now, would they allow such a bold move? However, if any one in that prison was capable of forgiving The Governor, it had to have been Rick. Rick is the only one who knows what it is like to teeter on the brink of self-destruction, to be unable to cope with past actions or let them go. It is entirely possible that in the moment, Rick saw that The Governor too was capable of coming back, just as he had. Rick’s speech was directed at himself and everyone who had been in the same boat—he needed to believe that no one was too far gone to bring back. He was wrong.

Given how late Tyreese was introduced in the show, it was obvious that he would not be getting his comic-book counterpart’s demise, but rather than do away with such an awful yet awesome scenario, the writers passed the brutal death onto Hershel. The writers for this show are notorious at this stage for giving characters important episodes before having them killed. Hershel’s death was almost expected after an episode as moving as “Internment”, where Hershel saved a large portion of the lives of the prison group. He has been a complex character from the start, going from delusional farmer to everyone’s wise grandfather, caring for the weak and the sick and dolling out much needed advice to friends and family. Almost no other character’s death would have been as painful to watch as Hershel’s was—to see such a loving man torn down by his antithesis in such a gruesome manner.

The fight which erupted directly after Hershel’s assault was the war the viewers had been begging for throughout season 3, which failed to deliver on that point. Every main character wound up on the chopping block at some point during the chaos, and that tank really added to the atmosphere of intensity. Daryl may not have had any clear story-arc set up yet (though finding Carol is a possibility), he is by far the most formidable fighter of the group; taking down a handful of people, walkers, and a tank all on his own. It is always a pleasure to see Daryl in a fight for his life (as awful as that sounds) because he always makes it look bad ass. 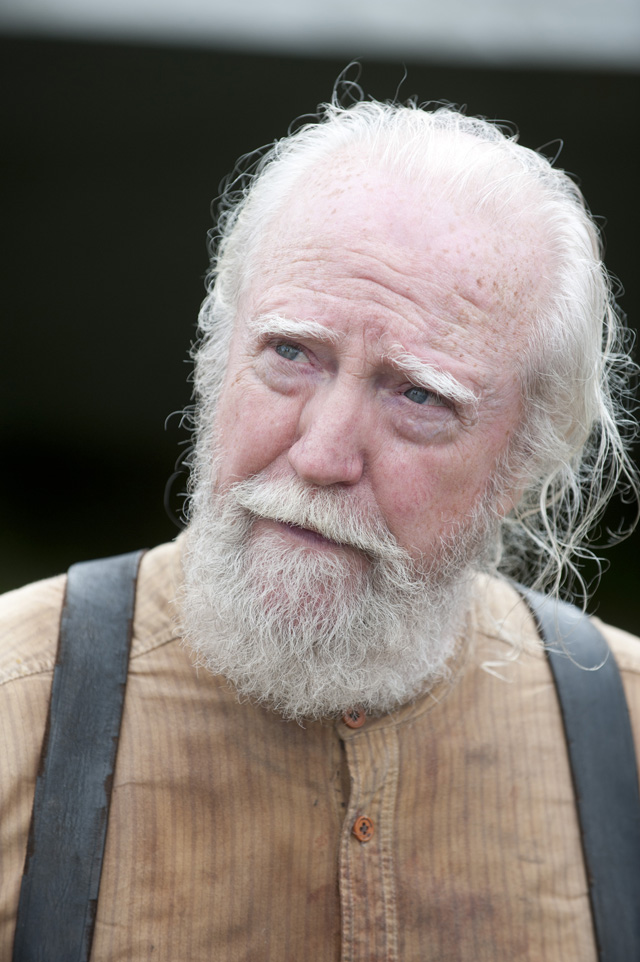 On to perhaps the biggest question after the episode: what happened to baby Judith? At first, it appeared she had been taken by walkers, and it is unlikely that the network would agree to show a baby being eaten alive or a mutilated baby corpse, so the “no body means no death” mantra may not apply. However, if she lived, Tyreese is the most likely candidate to have her. First, when he was saved by Lizzie he told them that they had to go, and they ran in the wrong direction. It would seem likely that the reason for that was so they could go grab Judith, who they had in their possession recently, as well as the other children. Furthermore, at around the 39-minute mark of the episode as the tank fires a shell at the walkway, in the background you can see Tyreese sprinting away with his gun over his shoulder and something in his arms. Could that be baby Judith? In the words of Robert Kirkman, the only way to know is to tune in in February.

Tyreese, Daryl, and Lizzie have collectively and independently posed another glaring issue that the characters must face: did Carol really kill Karen and David? First, Daryl, who knows Carol better than anybody, pointed out to Rick that killing two sick people in cold blood was extremely uncharacteristic of her—she may have been the advocate for realism in the group, but she never seemed to be a murderer. Next, Tyreese brought Rick and Daryl to another mysterious rat appearance, the last being the walkers who were fed rats, with the rat’s limbs spread out and the body sliced open to display the insides. Tyreese did make an excellent point that the last rats showed up the same day that Karen had been killed, so there may have been a link between the rats and the murderer.

Which leads us now to Lizzie… when the walkers were found out to have been fed rats by someone in the prison, the prime-suspect at the time was Lizzie. Could she have been the one to place this rat, too? For what purpose would it have been though? It seems a bit of a stretch to assume that such a frightened girl could go to murderer in one episode, but that does not mean it is not possible. For one, she could have taken Carol’s advice to the extreme, thinking Carol’s advocacy of a pure survivalist approach meant eliminating all possible threats without question. Furthermore, she did murder two adults in this week’s episode without issue—who is to say she has not done it before, too? If she was the one who killed Karen and David, it would pose a significant moral conundrum for Tyreese if he did find out. He has been hell-bent on revenge, but what would he do if it turns out the murderer was a child? Lizzie does seem to have been one of the few to escape with Tyreese, which leads to more of a possibility of her being the culprit, as conflict would undoubtedly arise between the two. 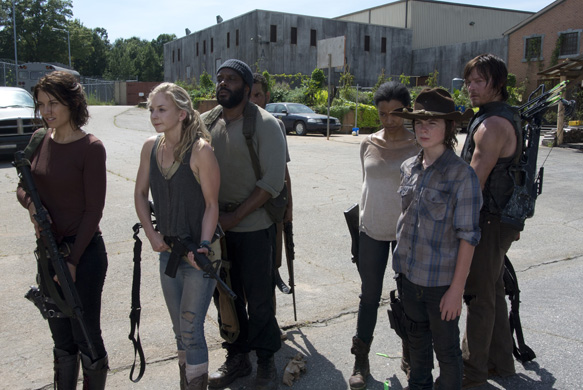 This episode was possibly the strongest of the season so far, right up there with “Internment”. However, it was not without its issues. For one, when someone comes knocking on your door with an army and a tank and “asks to talk”, your first response should not be to explain your group’s new political system to him. It is understandable that Rick was trying to avoid being the leader and the one to ultimately make a decision on how to handle the situation, but it could have been executed better. Secondly, what the hell happened to Michonne? It was as if once she got free, she just sat in a truck for a while. Why was she not immediately back into the thick of it all, rather than lingering in limbo until Rick desperately needed help. Furthermore, it looks like she did not make it out with anybody, which is odd considering she just saved Rick’s life—why would she not follow him, especially in his condition? It was as if she saved him, looked at The Governor, and then ran off. A final, minor issue of the episode was Daryl’s walker-shield. We have seen arrows pass clean through walker heads, Rick blast through walker heads with his python to hit other walkers, etc. Why, suddenly, would fully-automatic fire from rifles less than 20 feet away not penetrate necrotic flesh? The shield itself did not make a ton of sense—especially when you consider Bob Stookey took a bullet which went clean through, and he is not dead.

Regardless, we here at CrypticRock give “Too Far Gone” 4.5 out of 5 stars. This was truly the showdown the viewers have been waiting for, and it delivered nearly flawlessly. It will be exceedingly interesting to see how the writers handle the now splintered group and each shard’s respective storyline in the episodes to come. Also left up in there (amongst many other things) is whether or not Tara and Lily will be seen again. As far as the viewers know, they were the only two from The Governor’s group to survive the slaughter, with Lily having the final killing-blow on The Governor (finally!). The second half of season 4 cannot come soon enough, and it will surely be packed with intense drama and action. Andrew Lincoln (Rick) even stated in an interview that the show gets much more intense and controversial in the second half. See you all again in February! 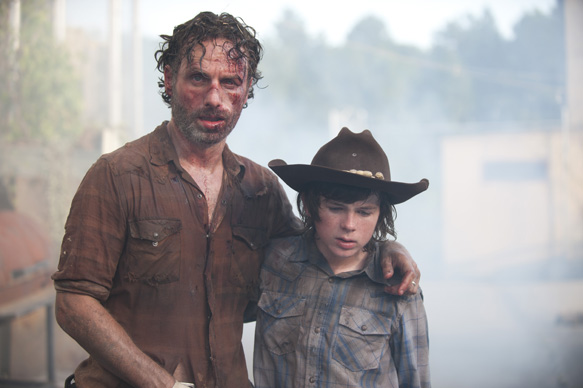