The Thing – 35 Years Of A Horror Classic

Posted at 15:23h Steven DeJoseph Jr. cryptic rock, CrypticRock, Movie Retrospectives, News 0 Comments
2.4k
SHARES
ShareTweet
Whenever one thinks of legendary movie Director John Carpenter, there is no question his 1978 iconic Horror film Halloween first comes to mind. Beyond such, he is also responsible for 1976’s Assault On Precinct 13, 1981’s The Fog, and 1988’s They Live, among many others. A master of cinema, with plenty of films tucked heavily under his belt, there is one in particular that stands out like a red-petaled flower in a black and white photo. Carpenter brought it to the big screen on Friday, June 25th of 1982, and doing so, gifted fans The Thing, arguably one of the most terrifying Sci-Fi/Horror movies ever made. 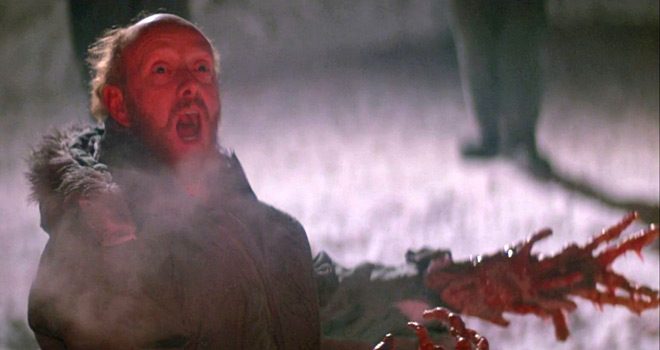 Well known and respected upon viewers today, however, upon initial release via Universal Pictures in 1982, The Thing saw a less-than-warm reception from moviegoers, and some known-it-all critics left a downtrodden Carpenter feeling as if he had short-changed his fans. Little did they know that The Thing would take the form of an all-time Horror classic 35 years later.

Before acknowledging the power and importance of The Thing, it must be noted it was notoriously ignored, fared poorly at the box-office, and as stated, was not at all a top choice for movie critics. Putting all of this into perspective, The Thing was also released just a few weeks after the now-classic movie, Steven Spielberg’s  E.T. The Extra-Terrestrial, Clint Eastwood’s Firefox, and Sylvester Stallone’s Rocky III. Even the Action-Fantasy flick The Sword and the Sorcerer was faring better than the expectant box-office numbers of The Thing. It was nobody’s fault, of course; it just seems that, at the time, a smartly written and incredibly acted Sci-Fi/Horror film was not on anyone’s must-see list.

Sometimes brilliance needs time to be recognized. Thus, after The Thing was released on VHS, and eventually made its way onto television, it found a new audience that kept growing, and growing, and knitting, and knitting. As a result, there were new reviews praising the film, heralding it as one of the greatest Horror flicks ever made. Drastic turnaround in opinion, right? It was now that people were celebrating every nook and cranny of this slick and scary Sci-Fi flick, and because of such, The Thing became a cult classic. Which leads to the discussion, what makes Carpenter’s The Thing so good? 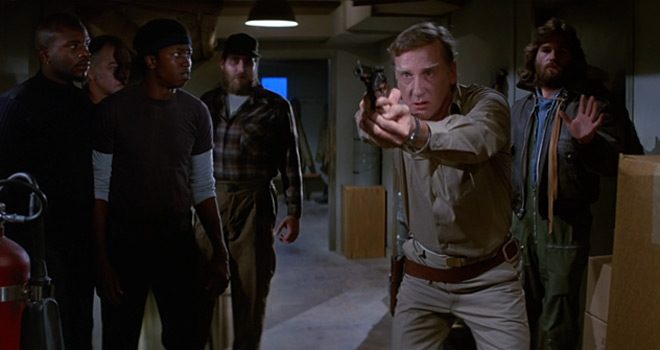 The story goes, Carpenter was approached to make a slightly big-budgeted film based on John W. Campbell, Jr’s 70-page novella, 1938 Who Goes There? Although a film already existed back in 1951 called: The Thing From Another World, it strayed from the actual story-line of the book. Was it a good movie?—yes, and indeed a well-acted, well-directed, and a very suspenseful one at that, but it became no match for Carpenter’s version, which would follow the book more closely.

During the writing stages of The Thing, many different screenplay treatments were being considered, later shunned by the producers (including a script from Writer William F. Nolan of 1986’s Burnt Offerings). Then there were many directors considered to helm the movie before Carpenter had signed on, including John Landis (The Blues Brothers 1980, An American Werewolf In London 1981).
Interesting enough, Tobe Hooper and Kim Henkel, co-creators of the infamous 1974 Horror film The Texas Chainsaw Massacre, had a script that came close to being green-lit, but it, too, was turned down. After all this, in 1981, Actor/Screenwriter Bill Lancaster (Bad News Bears 1976) presented a script that Carpenter instantly loved, which then set The Thing into full production.
A compelling, yet dark story, The Thing followed an American research team based in Antarctica under siege by a shape-shifting alien that absorbs its host, then imitates it, using its new form to feed on another living creature, not unlike a parasite. Leading the research crew of twelve is R.J. MacReady portrayed incredibly by Kurt Russell (Escape From New York 1981, Breakdown 1991). Joining him was the almighty Keith David (They Live 1988; Men At Work 1990) as Childs, T.K. Carter (Seems Like Old Times 1980, Ski Patrol 1990) as Nauls, and A. Wilford Brimley (The China Syndrome 1979, Cocoon 1990) as Blair, who are but a few of the characters along for the ride. When the attack of the shapeless, faceless being occurs, the entire crew is besieged by another parasite: Paranoia. Who’s who?—Nobody knows, but what a wonderful concept to a Horror movie it is!
The fact is, every scene in The Thing is painted by a crew of incredible actors, showing the viewer just how gosh-darned frightened these people are of this thing, and how equally afraid they are of one another. So much so, in fact, it begs one to ponder if there had really been an actual alien on the premises trying to devour Carpenter’s cast, all while he kept the cameras rolling.
Carpenter hired Rob Bottin (The Howling 1980, Robocop 1987) to handle the practical special effects needed to make the alien-abominations appear near life-like. Having worked on The Fog, Bottin proved to be a great choice because he made some of the scariest, most memorable things ever seen on the big screen. 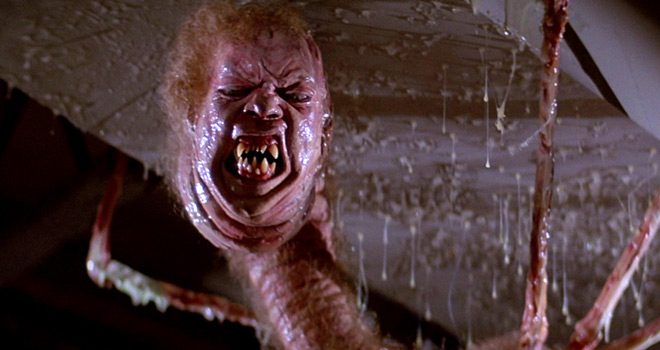 There were no computer effects and no fake-looking CGI used; just bona fide prosthetic effects, made by hand. That in mind, there are plenty of scenes in The Thing when the alien surfaces in many different slimy, contorted transformations. During these scenes, the actors look downright frightened by what they are up against. The fear showing in each of their faces can never be mistaken for acting. And while Bottin deserves a great deal of praise, because of being overloaded with work, SFX Artist Stan Winston (Terminator 1984, Aliens 1986) was hired to handle one truly terrifying dog-transformation scene, and it is one scene not to be forgotten.
It would be impossible to run down every scene, but another worth mentioning mixes elements of incredible SFX, suspense, über-intensity, and straight-up horror is the “blood-test” scene. For any viewer, a word of advice, pay attention to each of the actors’ facial expressions, because there is a nightmare happening right before their eyes, and it shows. All in all, Bottin really outdid himself with his outstanding special effects and his work remains a fan-favorite helping making Carpenter’s The Thing in no way a remake of the 1951 film, but a re-do, done well.
Speaking of which, in 2011, Universal Pictures released a “prequel”/remake with the same title, but many would debate the film missed the mark and was dressed with lazy-looking CGI effects. As for John Carpenter’s The Thing, it is an incomparable classic that will be poorly imitated into mediocre replicas. It is an entity in and of its own nature, crafted in hard labor and dedication from an outstanding cast and crew. Despite any of the negative reviews from critics in the past, every little aspect of The Thing works: the gloomy, cold atmosphere; the growing paranoia between each member of the research crew; the fantastic (and inspiring) SFX work; right down to the eerie synth score lowly playing in the background from Composer Ennio Morricone. 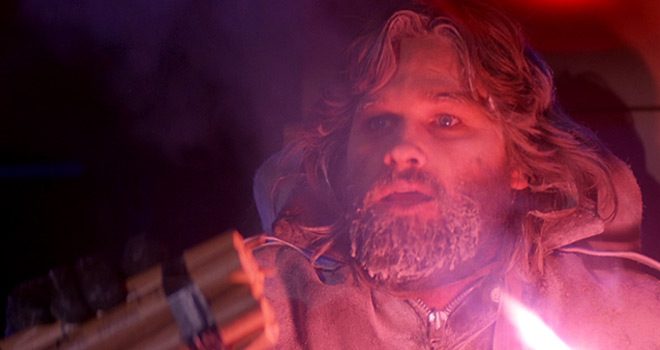 Remaining relative in popular culture, to satisfy the hungriest of The Thing fans, back in 1992 Dark Horse Comics released an unofficial 2-issue comic book sequel, titled: The Thing From Another World, that occurs around 20-minutes after the ending of the 1982 movie. Also, online art gallery/movie-store site, Mondo (Mondotees.com), in affiliation with USAopoly’s designer games division, Project Raygun, are releasing a board game called The Thing: Infection At Outpost 31, with a possible October 2017 release.
Additionally, the film has influenced countless other artists. Mindless Self Indulgence’s Jimmy Urine states, “Every single Halloween, without fail, I always watch The Thing by John Carpenter! I think it’s pretty much a perfect movie and it’s probably his best.”
Which leads us back to the question at hand, what makes The Thing so good? Well, it was the work that had gone into making the movie and all the layers within its 110-minute running time. It is the type of movie that will never age and really holds up to this day. Despite being deemed a box-office failure, and not reviewed well by critics back in 1982, The Thing is a winner in the hearts of many Horror movie fans, and will be for many more years to come. 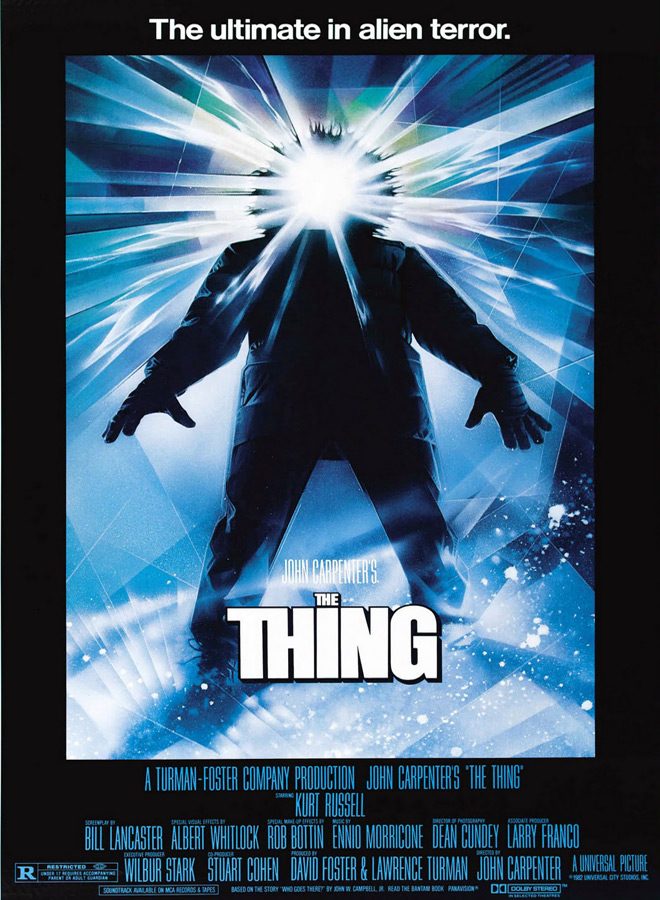