The third time’s the harm, as Carcass—the Liverpool legends responsible for Surgical Steel, our number one album of 2013—embark upon their first sustained domestic tour in five years. Presented by Nuclear Blast, Peavey, Metal Blade, IndieMerchstore.com, Season of Mist and Lace Music, the 2014 Decibel Magazine Tour will fester across North America for 21 putrefying dates, once again seamlessly integrating the past, present and future of extreme music.

Ever-acerbic Carcass frontman Jeff Walker finds it difficult to contain his enthusiasm. “This is possibly the unsexiest Decibel Tour lineup yet,” he quips. “We’re all bringing the ‘girth’ back to the U.S., along with gray hair and sensible footwear. But it’s the music that matters, right? Just close your eyes and think of England. If that fails, think of Tampa.”

Black Dahlia Murder frontman Trevor Strand is a longtime Carcass superfan, so much so that he has the coolest tattoo ever: surgical instruments from the cover of the 1992 Tools of the Trade EP: “We are absolutely thrilled to be a part of this amazing tour. I will do my best to play it cool in the presence of such great and influential musicians who I have worshipped since the seventh grade—but I can’t guarantee anything. We in the Dahlia camp are elated to have been considered, and vow to do our best to impress. Nothing less for the combined might of Carcass and Gorguts!”

Luc Lemay of Canadian technical death metal institution Gorguts can’t wait to bring songs from 2013 comeback sensation Colored Sands to the stage. “Since the first day I discovered Decibel, I always saw them like an institution,” he enthuses. “So, when I got the news that we were offered to be part of their annual tour, I felt totally honored and excited as hell! It will be amazing to share the stage with Carcass, the Black Dahlia Murder and Noisem to perform our new music every night!”

We know you can’t wait for these symphonies of sickness to be conducted either, so here’s your chance to score a great deal AND avoid standing in line. There will be a number of VIP premium packages available in each market, providing you with a T-shirt, poster, “Skip the Line” pass and free digital sampler from Nuclear Blast. The price of this package is less than you would spend on a ticket and a tour shirt at the show! More details, including ticket info, are announced at www.decibelmagazinetour.com. Pre-Sale tickets are available now at http://www.showstubs.com/decibel. 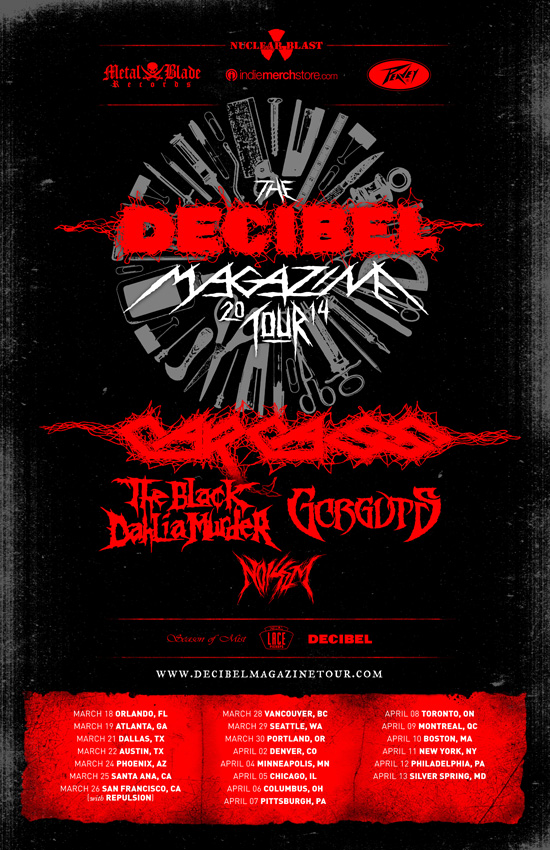