This week in horror movie history: American horror film Candyman was released in theaters across North American October 16th, 1992.  Based on the Clive Barker short story The Forbidden and directed by Bernard Rose (Paperhouse 1998), Candyman stars Virginia Madsen (Haunting in Connecticut 2009), Kasi Lemmons (Silence of the Lambs 1991), Vanessa Williams (New Jack City 1991) and Xander Berkeley (Taken 2008), along with the Candyman himself Tony Todd.  Not since Norman Bates in  Alfred Hitchcock’s Psycho (1960) has an actor terrified audiences so completely with a relatively human looking face as Todd’s Candyman portray.  Featuring a perfected score by Philip Glass, who won a Golden Globe for his work in The Truman Show (1998), Candyman was filmed on location at the Cabrini-Green Public Housing Projects on Chicago’s North Side.  Grossing over $25 million in its twenty two year run, and boasting an outstanding 72% fresh rating at Rotten Tomatoes, Candyman remains one of the most popular horror films of our time. Candyman himself came in at #8 on both Bloody Disgusting’s Top 13 Slasher’s in Horror Movie History and UGO’s Top 11 Slashers lists.

The movie begins with Helen Lyle (Madsen), a graduate student working on her thesis on urban legends, when she stumbles across the local story of the Candyman. At first, he seems like a conglomeration of other urban legends; his hook hand, his appearaning in the room if one should say his name while looking into a mirror, and his desire to kill the ones who call him. As more details emerge, Helen realizes that not only is Candyman a legend in his own right, but he also has a lot more in common with her than she thinks. Apparently, Candyman has killed people right in her hometown of Chicago, in the housing projects on the other side of the river from her own condo. The most recent deaths were a woman who’s 911 calls went unanswered but was later found slashed to death in her own bathtub, and a young boy castrated when using an abandoned public restroom while his mother shopped across the street. Helen gets her friend Bernadette (Lemmons) and they travel to another world on the other side of the river, a place where the well-dressed women were in fear for their safety from the local thugs. They meet a young single mother, Anne-Marie (Williams), who gives in and tells them about her neighbor’s murder in the bathtub. Later, on a return trip, Helen investigates the graffiti-covered, abandoned bathroom, where she is attacked by a young man carrying a hook and calling himself Candyman. Thinking their crimes are solved, the police take Helen’s statement, arrest the hook-carrying punk and send her home. 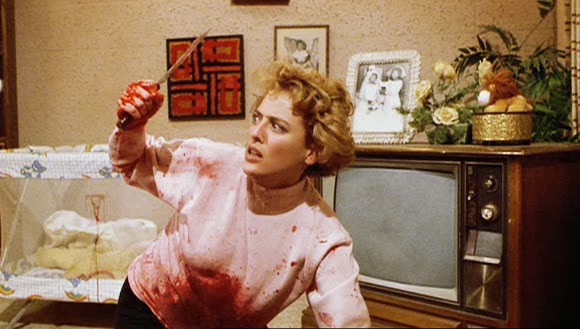 After the fact, on her way to her car the real Candyman shows up in a surreal, off-kilter scene, telling Helen that by spreading the story that his crimes are only urban legends, she is forcing him to come out and prove that he is a real threat. Helen passes out and wakes up covered in blood on the floor of Anne-Marie’s apartment. She finds the young mother’s beheaded rottweiler on the table and the hysterical Anne-Marie wailing over her now missing son’s bloody crib. Anne-Marie goes after Helen in her grief, and just as the police arrive, they see Helen standing over the tiny waitress with a butcher knife. This gets Helen arrested, and no amount of explaining will make them see things her way. She gets bailed out by her husband, Trevor (Berkeley), but has been convicted by public opinion and is afraid to leave her apartment. During a bath, Candyman shows up again and cuts Helen’s neck, leaving her to bleed into unconsciousness. When Bernadette shows up to give Helen some support, the frightened grad student begs her friend to stay away, but Candyman manages to kill her anyway. This gets Helen sent to the psychiatric hospital for the remainder of her pretrial time. Still trying to convince the world that she is not crazy, Helen calls up Candyman in her hospital room mirror to prove that he is real, but this only gets her doctor killed by the madman. Helen does manage to escape the hospital in the confusion and she finds her husband already living with one of his students. With nowhere else to turn, Helen goes back to Cabrini-Green to see if she can find Anne-Marie’s missing infant. She does find him, along with Candyman, in a huge pile of junk that the housing project residents plan to burn. The monster tells her that she can save the child’s life is she agrees to sacrifice herself to him. She acquiesces, not knowing that Candyman had planned to take the both of them, no matter what she chose. As the residents light the junk pile, Helen manages to save the baby, but dies from burns in the process. As for Candyman, only his hook remains. At Helen’s funeral, the members of Cabrini-Green pay their respects to her by leaving metal hooks on her coffin. Later, when a guilty Trevor tries to call his wife’s spirit forth Candyman style, Helen appears in the glass and slashes him. As the credits roll, the audience sees new graffiti showing Helen’s face with her hair a flaming halo around her head, as she now enters urban legend status as the new Candyman. 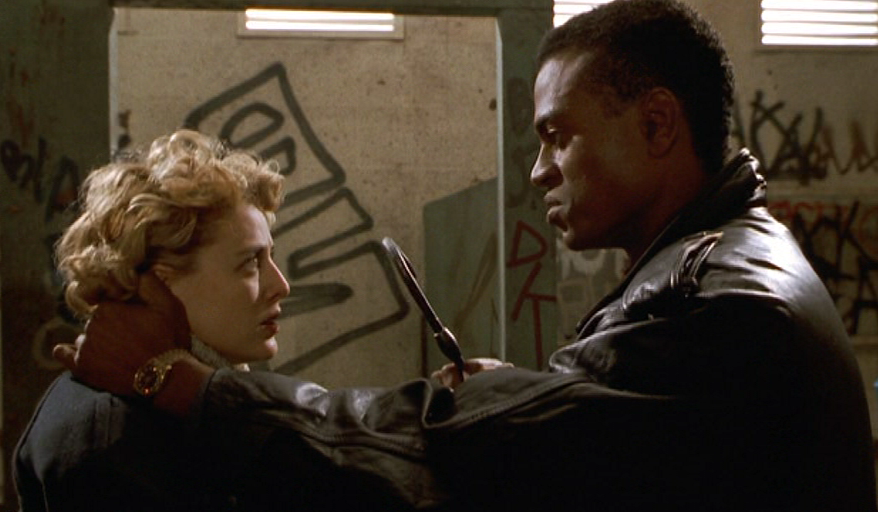 Coming out six years before Urban Legends, Candyman reminds audiences why they repeat those spooky stories of local lore. Everyone has heard the tale of crazy Bloody Mary and has hidden in darkened bathrooms, whispering the name of the local dead woman who hides behind the glass, biding her time until she can jump out and slash away happily at their candlelit faces. Many have sat around a campfire, listening to the story of the hook-handed escapee from the neighboring insane asylum, who snuck through the woods and terrorized parking teenagers. Others have been in cars that have sat on the nearby railroad crossing, bumpers sprinkled in baby powder, waiting for the ghosts of deceased children to push them up over the dangerous tracks. These are things often done by people, because deep down they wonder if the legends are the truth. If everyone is talking about them, then those supernatural stories must be true, right? That being said, everyone can relate to Helen and her innocent investigation, and wonder about her sanity. She is the only one who sees Candyman and lives. Is he real, or is she crazy and committing the crimes herself? Is Candyman even the real bad guy? There is just enough sympathy for poor Daniel Robataille known as Candyman. Is it the visage of the hook-fisted man or the long ago racists who killed Daniel by chopping off his hand, jamming a metal hook into the stump and covering him with honey so the nearby aviary bumblebees would sting him to death? Or is it Helen herself for dredging up this previously secret story? One thing is for sure, one viewing of this surreal, psychologically powerful movie is enough to make one want to cover up all of the mirrors and shudder at the sound of a single buzzing bumblebee. 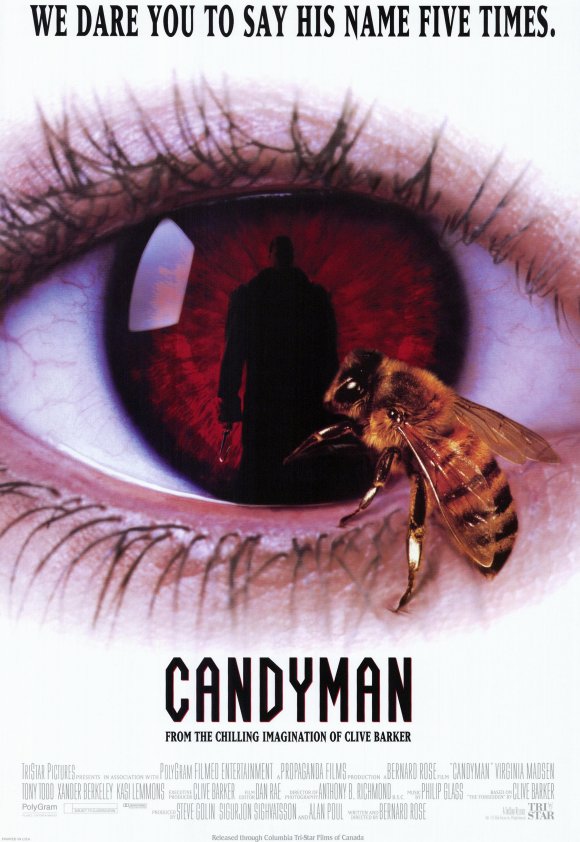 Purchase Candyman on DVD on Amazon