This week in Horror Movie History the Brian De Palma classic, Carrie was released on November 3rd in 1976.  Based on the novel by Stephen King, De Palma filled his cast with unknown talent, and he fished from a big pond. Doubling up auditions for Star Wars (1977), De Palma and George Lucas traded actors like William Katt, Carrie Fisher and Amy Irving back and forth until finally settling them into their current roles. De Palma cast Sissy Spacek as the mousy, nervous seventeen year old, Carrie White. A method actress, Spacek removed herself from the rest of the cast and surrounded herself with religious iconography and Gustave Dore’s Illustrated Bible to stay in character. The movie also starred John Travolta, Nancy Allen (who went on to marry De Palma), P.J. Soles, Betty Buckley and Piper Laurie, who came out of a fifteen year retirement to play in what she considered a black comedy. The crew included Mario Tosi (Director of Photography), Gregory M. Auer (Special FX Supervisor), Spacek’s husband Jack Fisk (art director), and Lawrence Cohen (Screenwriter). Interestingly enough, some of the music for the prom scene was sung by Amy Irving’s sister, Katie.

The movie starts with Carrie (Spacek) missing an easy hit during a volleyball game in gym, although no one is surprised. Her classmates assume she will blow it, and she does. When naïve Carrie gets her first menstrual cycle in the shower after gym class, she panics, thinking she is bleeding to death. The other girls know better, and seeing this as another opportunity to laugh at their scapegoat, gang up on her, throwing pads and tampons and yelling the iconic line, “Plug it up!” Carrie does not understand and cowers in the corner. Miss Collins (Buckley), the gym teacher, sees what’s going on and breaks it up. Later, frustrated by the Principal’s inability to remember her name, Carrie freaks out, causing a ceramic ashtray to flip off of the desk even though no one touches it. The audience sees the depth of Carrie’s reputation as she’s walking home, when even a lowly Middle Schooler calls out, “Creepy Carrie!” Carrie arrives home and questions her mother about the womanly secret, but Mama (Laurie) does not explain, only preaches to the girl about sin and locks her in the “Prayer Closet,” complete with a crucified Saint Sebastian statue with arrows protruding from his body. 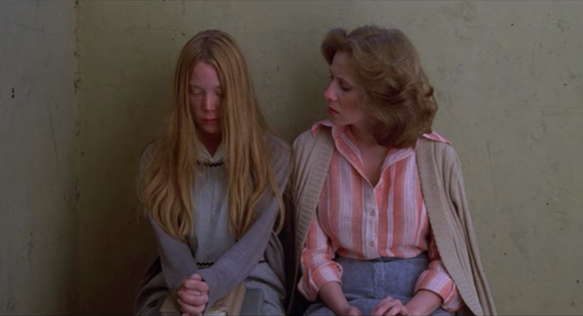 The next day, when even teachers are shown making fun of her, the class laughs – all except Tommy Ross (Katt), Bates High School’s athletic All-Star. Later, the girls’ gym class realize the severity of their prank when they get detentions, but tough girl Chris Hargensen (Allen) decides to be uncooperative, so has her Prom ticket revoked. Blaming Carrie for this punishment rather than her own stubbornness, Chris and her boyfriend Billy (Travolta) decide it’s time to get even with the mousy Carrie. Hearing that guilt-ridden Sue Snell (Irving) has decided to forgo the Prom and has asked her own boyfriend, nice guy Tommy Ross, to take Carrie instead, the duo gather supplies for the ultimate prank. A plant on the Prom committee here, a bashed in pig skull there, and all Chris and Billy have to do is wait for Prom night. Of course, Carrie still has to convince her zealous, sin-obsessed mother that Proms are not Dens of Iniquity. Unable to get her point across, Carrie scares her mother into relenting by slamming all of the house windows shut. Mrs. White now sees her daughter as a witch, but is too afraid to stop her. During a magical Prom night for Carrie, including her first date, her first dance, and her first kiss, Chris and Billy’s prank, with the help of Norma (Soles), is set into motion. Carrie and Tommy are voted King and Queen with a loaded ballet box, the couple step up onto the stage in front of a clapping, happy Senior class, and, beneath the stage, Chris yanks a rope, dumping a bucket of pig’s blood onto Carrie from above. As a hiding Sue Snell looks on, the bucket falls, hits Tommy in the head and knocks him out. The clapping turns to shocked horror, but Carrie only sees laughing faces. She slams the doors with her mind, causing panic. Using high pressure fire hoses to herd the teens, Carrie turns the water onto the overhead lights, causing shorts that lead to fire. People are crushed, burned and electrocuted as Chris and Billy watch from outside the gym. As fire trucks arrive, Carrie, dazed and wide-eyed, walks out of the gym and slams the doors as the school behind her burns. Chris and Billy see another chance to run Carrie down, but she turns as they gain on her and blows up their car. Arriving home, Carrie takes a bath to wash the blood off, reminiscent of the ‘period in the shower’ scene. Looking for comfort from her mother, Carrie only receives a knife in her back. Mama White prays and slashes at the air. Before she can stab Carrie again, kitchen tools fly from the counter and impale Mama to the wall, making her look like the spooky Saint Sebastian statue. Full of guilt and regret over killing her mother, Carrie causes the house to implode around her, burning it to the ground. Later, as a surviving Sue Snell sleeps, she dreams about visiting the lot where the White house stood, and as she is laying down flowers to angelic music, a bloody hand reaches out of the ground and grasps her arm. 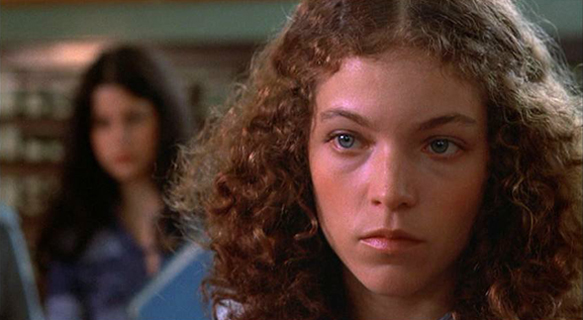 Shot over fifty days in LA’s Palisades Charter High School and a little house in Santa Paula, CA, Carrie was filmed for a budget of $1.8 million, but made $33 million at the Box Office for United Artists, plus garnered Oscar nods for both Spacek and Laurie. Although filming was arduous (the Prom sequence alone took over two weeks to shoot), Spacek was a trooper, choosing to sleep in her bloody gown for three days straight to keep the blood stains consistent. Even though the stuff dumped on her was only karo syrup and food coloring, Sissy said she was willing to let them use real blood.  Also on the set, P.J. Soles burst an eardrum after being hit with the high pressure water hose. Scenes like Sue’s dream sequence and the attempted hit and run of Carrie by Chris and Billy were filmed backwards to give the film a more disorienting feel. Spacek even insisted on being the one who reached up from underground to grab Sue’s arm during the dream sequence. 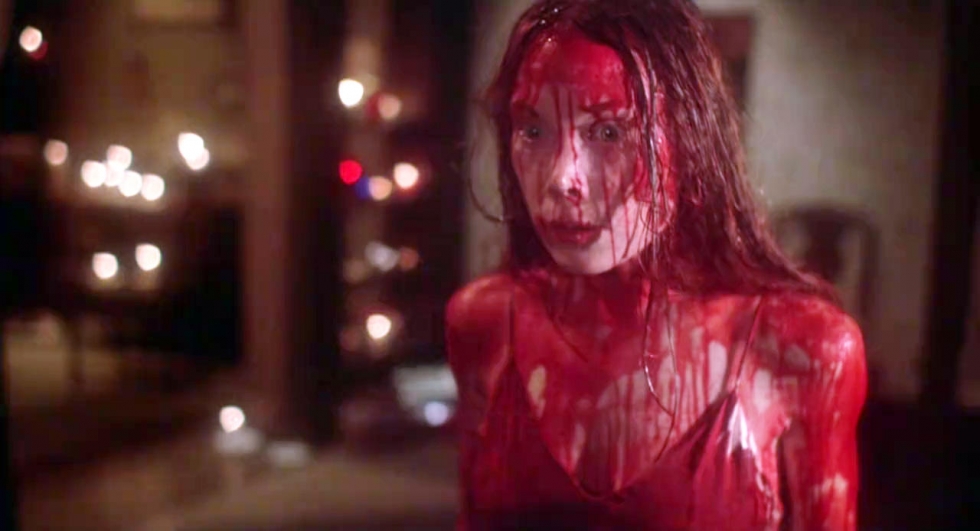 Named “absolutely spellbinding” and “a true horror story” by Roger Ebert, Carrie was placed by Quentin Tarantino at #8 on a list of his 11 favorite films. The film was ranked eighth on Bravo’s miniseries The 100 Scariest Movie Moments (2004) and has a 92% Fresh rating at Rotten Tomatoes. There have been sequels and remakes, but none of them come close to De Palma’s classic. Those who ever feeling a little awkward, remember –  they’re all gonna laugh at you. 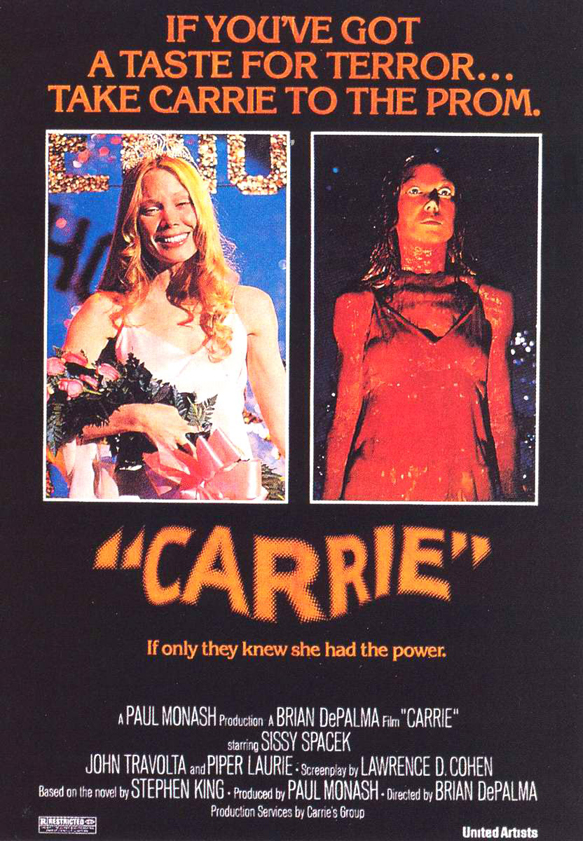