This week in Horror movie history, back on March 13, 1987, Horror/Comedy Evil Dead 2: Dead by Dawn via Rosebud Releasing hit theaters across success. With success, and controversy, associated with 1981’s independent classic The Evil Dead, how could Director/Writer Sam Raimi (Spider-Man 2002, Drag Me to Hell 2009) not do a sequel? With legendary Bruce Campbell (Bubba Ho-Tep 2002, My Name is Bruce 2007) returning as Ash Williams and Raimi returning to the director’s chair, this time collaborating with Scott Spiegel (From Dusk Till Dawn 2: Texas Blood Money 1999, Hostel: Part II 2007), to write the script, Evil Dead 2: Dead by Dawn was one of the most anticipated Horror sequels to be released in 1987, along with A Nightmare on Elm Street 3: Dream Warriors, House II: The Second Story, and Hello Mary Lou: Promo Night II. 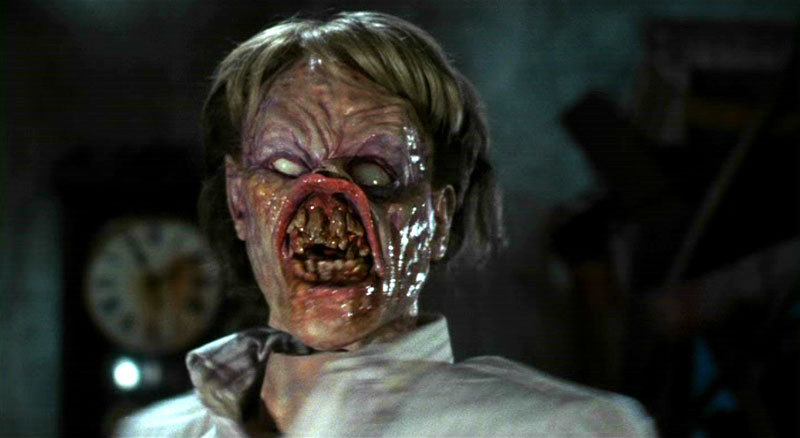 Evil Dead 2: Dead by Dawn begins recapping the events of The Evil Dead as Ash is still at the cabin. Moving forward, demonic forces still lurk and hunt Ash while the Professor Raymond Knowby’s (John Peakes: The Mighty Macs 2009, 6 Souls 2010) daughter, Annie Knowby (Sarah Berry: C.H.U.D. II: Bud the Chud 1989), and colleague/boyfriend Professor Ed Getley (Richard Domeier: Teen Wolf 1985, Girl, Interrupted 1999) return to the cabin with more pages of the Book of the Dead. Will they be able to find the secret they need to vanquish the evil spirit before it possesses them all?

While the original The Evil Dead was in production, Raimi was already tossing around ideas for a sequel, so after his next film failed to grab audiences, he and producer Robert Tapert (Darkman 1990, The Grudge 2004) started trying to pull the films sequel together with the help of Producer Dino De Laurentiis, who owned the production and distribution company DEG, and who happened to be working with famed Horror author Stephen King on a few adaptions. King himself had written a stellar review of The Evil Dead and he had asked De Laurentiis to fund a second film, which he did reluctantly.

The original script for the second chapter was written by Raimi during the production of his 1986 Crimewave, it had been shelved. When De Laurentiis came on board, Raimi picked it up and asked his colleague Spiegel to help pepper it with comedic elements. Together, the two hammered out an updated script and Evil Dead 2: Dead by Dawn was on its way into production. 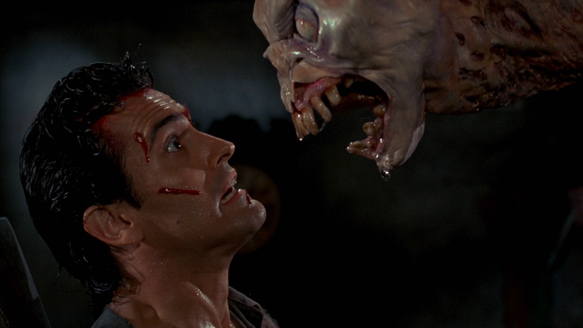 After some compromise on things, filming was smooth actor/director-wise since the crew worked together on previous shoots. However, the set of Evil Dead 2: Dead by Dawn was not completely without its mishaps. Raimi’s brother, Ted (Spider-man 2002, Shocker 1989), had a part in the film where he wore a costume, but the lack of ventilation caused Raimi to overheat. In fact, he was sweating so much that sweat coming out of his costume can be seen in the movie. Also, a sense of fun was lost on the crew during filming as they paid homage to other Horror classics with a bladed glove strategically placed since Wes Craven had Heather Langenkamp’s character of Nancy watching The Evil Dead in a scene of his 1984 A Nightmare on Elm Street.

In addition, Evil Dead 2: Dead by Dawn’s dark humor amped up with the same manic fervor that Tobe Hooper’s 1973 The Texas Chainsaw Massacre had. Campbell’s portrayal of Ash’s progression from watching his friends and girlfriend get possessed and killed in the original to what transpires in the second him, his character is believable, one-liners and all, as everybody deals with trauma differently. The same goes for the rest of the cast.

As far as the impact on its viewers, the effect of seeing through the evil spirit’s point of view gives a real sense of claustrophobia since viewers never know when or where it is going to pop up, whether it is going to be in a character or stalking.  The only thing viewers can be sure of is that the evil spirit will be in and around the cabin, the same location as the original film. Another effect that was jarring was the possession transformations that seemed to happen practically in mid-action or mid-sentence, eliciting the timed jumps at will. 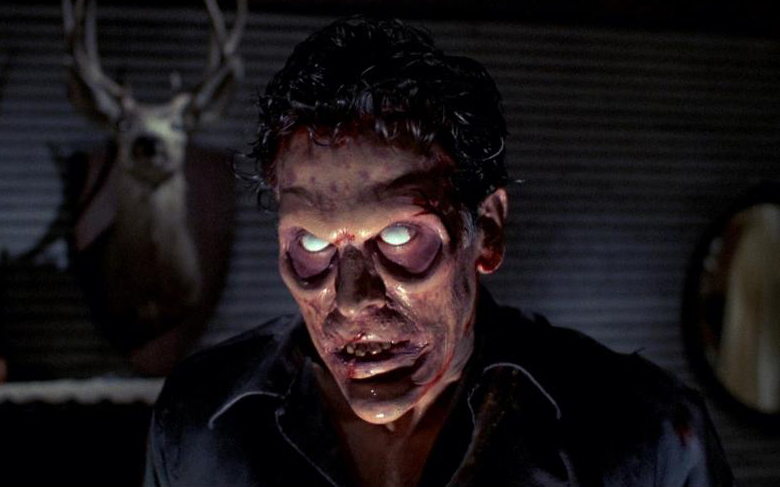 In all, Evil Dead 2: Dead by Dawn’s box office success was a testament to the franchise’s burgeoning fan base. The film was predominantly received well by critics and audiences alike, earning approximately $807,000 on its opening weekend, on way to approximately $5,900,000 in revue in US alone. The positivity around Evil Dead 2: Dead by Dawn even garnered the film five nominations for awards. The magazine Entertainment Weekly placed Evil Dead II 19th on their “The Top 50 Cult Films” chart. Furthermore, Sight and Sound made it 34th on their “50 Funniest Films of All Time” chart, and Empire magazine had Evil Dead II 49th on their “The 500 Greatest Movies of All Time” in 2008.

Since Evil Dead 2: Dead by Dawn’s release, it has been made into three video games; Evil Dead: Hail to the King (2000), Evil Dead: A Fistful of Boomstick (2003), and Evil Dead: Regeneration (2005), as well as references or clips like the aforementioned A Nightmare on Elm Street, Hiding Out (1987), and Child’s Play 2 (1990) among many others. Thankfully, the film did well enough that Raimi and Campbell reunited to do Army of Darkness in 1992, and then again to do the hit Ash vs Evil Dead series, currently going into season 2 on STARZ. This assures the Deadites, old and new, will have adventures for years to come, while Evil Dead 2: Dead by Dawn’s legacy lives on.

Purchase Evil Dead 2: Dead by Dawn on Blu-ray/DVD on Amazon