Before production began, Cosmatos and Winston researched underwater creatures to get ideas for the movies creatures, coming up with 50-60 drawn out ideas. The shooting creature was an amalgamation of those ideas, making a human/marine hybrid that incorporated its victims’ traits.  Then, shooting began April of 1988, even though financing fell through for the De Laurentiis’, so Dino De Laurentiis’ Seven Greenwood division of DEG picked up the tab.

In actuality, only a handful of scenes were shot underwater for Leviathan. Instead, the production chose to use a technique called the “dry for wet” look. This technique uses smoke, colored filters, and/or lighting effects to give the effect of being underwater while filming on a dry stage. Fans and slow motion are used to make hair or clothing appear to float in the current. With the advent of digital generation, adding rising bubbles in post to make the scene that much more realistic, is possible. Also, the production would go between a soundstage and a tank for sets.

The set for the ship in the film has lived-in feel; clean, yet aged with all the requisite creaks and groans of weathered metal while even with the dry for wet technique, the underwater sequences look authentic with vibrant blues and greens and the addition of various sea creatures and bubbles coming from breathing apparatuses. As things start going south, the spaciousness quickly shrinks, and claustrophobia sets in, even closer to the end in the open ocean.

Additionally, the characters of Leviathan genuinely care about each other while being skeptical of the company they work for, especially when things go south, and they request to be evacuated, which Foster plays the smooth-talking, question-skirting company president to a T while Weller’s Beck questions why he is even there since he is a geologist, not a miner. Still, he knows the team needs a leader. The rest of the cast fall in line as the duped miners made company puppets with their own little traits to set them apart.

Plot-wise, Leviathan borrows or mimics heavily from contemporary films like 1979’s Alien and 1982’s The Thing, even though the plot device has been in American theaters since 1953’s The Beast from 20,000 Fathoms. Viewers who saw and who have seen these films quickly labeled Leviathan a lesser movie while complimenting some of the more original elements. Nonetheless, the pace of the film is quite good. Viewers get enough time to get a feel for the characters in the 103 minute run-time without getting bogged down in extraneous exposition while the film is a slow burn leading to the creatures’ reveals. Once the first creature’s reveal, the pace accelerates exponentially to the harrowing conclusion. The pace coupled with the soundtrack by Jerry Goldsmith (Star Trek: The Next Generation 1987, Mulan 1998), which rises and falls with the burn, builds the tension and the closed-in feeling.

Since Leviathan’s release, Rotten Tomatoes has the film with a 14% “Fresh” rating while Internet Movie Database has it rated 7.5/10, however, Leviathan made an impression over the years with references in many films and TV shows. For instance, 2003’s Aquanoids mentions Leviathan during a beach sequence in which some characters bring it up. Then, the 2013 episode, “The Legacy of Stan Winston,” of the TV show Blood and Guts with Scott Ian, mentions the film as not one of Winston’s better films. When the Blu-ray released in 2014, it featured three short documentaries – Leviathan: Monster Melting Pot, Surviving Leviathan with Ernie Hudson, and Dissecting Cobb with Hector Elizondo.

Despite getting negative reviews by critics and a second wave of viewers, Leviathan has found new life on the premium channels like Encore, Starz, and HBO, as well as its Blu-ray release with ratings of three to five stars reviews on Amazon, showing the power of nostalgia, and the power of people looking for the same, but different, cementing Leviathan’s cult status for all time. 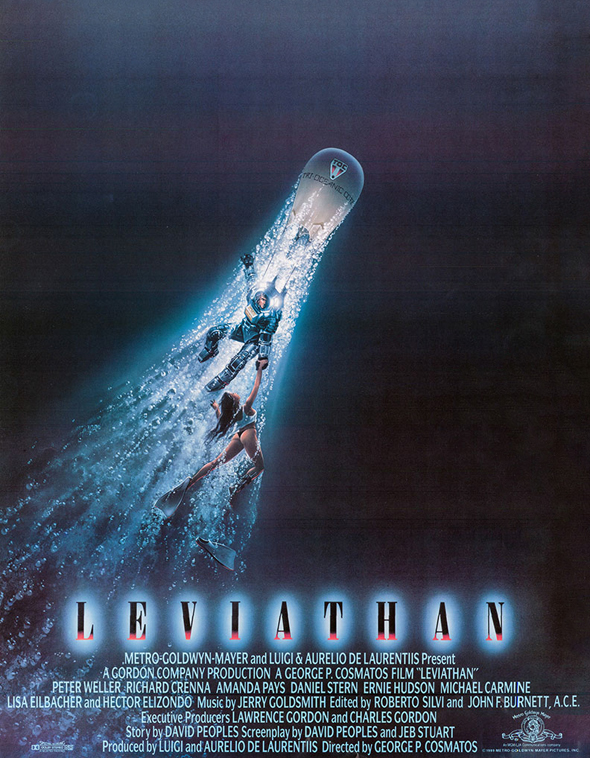 Purchase Leviathan on Blu-ray/DVD on Amazon