This Week in Horror History – The Texas Chainsaw Massacre: The Beginning (2006)

This week in horror movie history, Texas Chainsaw Massacre: The Beginning was released on October 6th 2006 in theaters across North America grossing $18.5 million during its  opening weekend.  A prequel to the 2003 remake The Texas Chainsaw Massacre, Texas Chainsaw Massacre: The Beginning was a much anticipated story laying out the history of the Hewitts, the psychopathic, cannibalistic, homicidal family that sprouted the famed chainsaw-wielding Leatherface, a horror icon known in all horror circles.  Directed by Jonathan Liebesman (Darkness Falls 2003), written by Sheldon V. Turner (X-Men: First Class 2011) and co-produced by Tobe Hooper and Kim Henkel, both creators of the original The Texas Chain Saw Massacre in 1974. Like the original 1974 film, several little known actors were cast such as Jordana Brewster (The Faculty 1998), Taylor Handley (The O.C. series), Diora Baird (Wedding Crashers 2005), and Matt Bomer (White Collar) play the teenage unfortunates who stumble across that famous Texan farmhouse. Luckily for movie goers, all of the original Hewitt family actors from 2003’s The Texas Chainsaw Massacre were recast for this prequel. Andrew Bryniarski (Street Fighter 1994), Terrence Evans (Pale Rider 1985), Marietta Marich (Rushmore 1998), Kathy Lamkin (No Country For Old Men 2007) and even the lovable R. Lee Ermey (Full Metal Jacket 1987) jumped on board as soon as they heard this prequel was in the works. Special effects were fronted by Michael Ahasay (Nightmare on Elm Street 2010) while digital effects were produced by Des Carey (W. 2008). 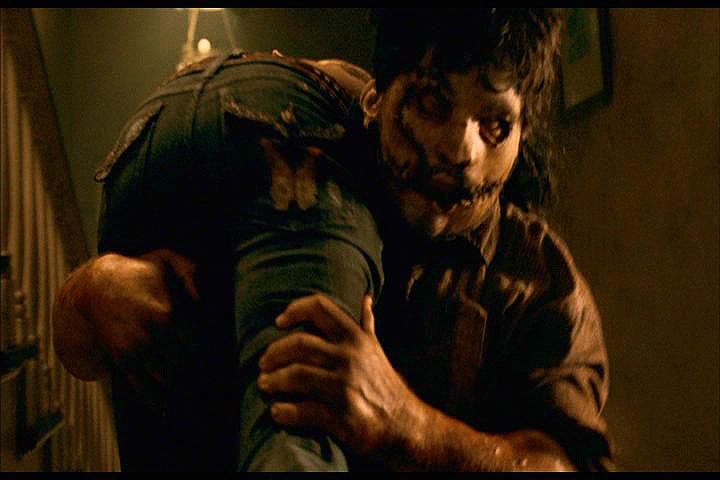 Literally born and raised on the slaughterhouse floor, Thomas Hewitt, AKA Leatherface, started out life as a malformed orphan, left for dead in a dumpster in the back of Lee’s Meats in 1939. A young Luda Mae (Allison Marich) finds him while searching for edible meat scraps and brings him home. Thirty years later in 1969, two brothers, Eric (Bomer) and Dean (Handley) drive across country to answer the call of the draft. With them are their girlfriends, Chrissie (Brewster) and Bailey (Baird). At the same time, the slaughterhouse the Hewitt family works in is closed by the Health Inspector, leaving them without food or an income. Leatherface, who wears a black leather face mask on the lower half of his face, grudgingly leaves, only to return to kill his hated ex-boss in a fit of sledgehammering rage. Later, when Sheriff Winston Hoyt (Lew Temple) shows up to question Leatherface about the crime, he is led out onto a back road by Leatherface’s Uncle/brother Charlie Hewitt (Ermey), where he is promptly blown away and served for dinner at the Hewitt household. This is, apparently, the first time the Hewitts have eaten long pork as a family, although viewers do hear a bit of exposition from Uncle Charlie about his cannibalistic time as a POW in Korea in the ’50s. Not one to look a gift horse in the mouth, Uncle Charlie dons the dead Sheriff’s uniform, forces the family to now call him Sheriff Hoyt and uses the newfound power to pull over unsuspecting motorists and turn them into next week’s stew.

Meanwhile, the four travelers are held up by a shotgun toting Biker Chick (Cyia Batten), who runs them off the road and attempts to rob them. They are ‘saved’ by the good Sheriff Hoyt, only to watch him blow that Biker Chick to bits and bring them all home to his mama Luda Mae (Marietta Marich) to stock the family’s freezers. Little does the Sheriff know that he missed one – Chrissie had been thrown from the car during the accident, and managed to stay hidden while the Sheriff took the other three away. She hides inside the totaled jeep as Hoyt calls his Uncle Monty (Evans) to come and tow the car. This gets Chrissie onto the farm, where she finds the guys strung up by the rafters in the barn and Bailey hogtied under the kitchen table. She manages to get to the highway and flags down another biker (Lee Tergesen) to come on the pretense that his friend, the Biker Chick, is still alive and needs to be saved. This does nothing but get Biker Dude killed. Hoyt tells Dean that doing twenty pushups will get him a ticket to ride, and he does then, even though Hoyt beats him with a nightstick after every count. Eric does manage to escape, and even frees Bailey, but as the three of them flee, Dean steps in a bear trap, Bailey gets heathooked by Leatherface as she’s driving the tow truck down the driveway, and Eric eats the end of the Sheriff’s rifle stock. Leatherface likes something in Eric, particularly his face skin. As Chrissie sneaks back into the house and hides beneath the cutting table, Leatherface stabs Eric through the chest and slices off the man’s face, then tying the entire headskin onto his own mug. 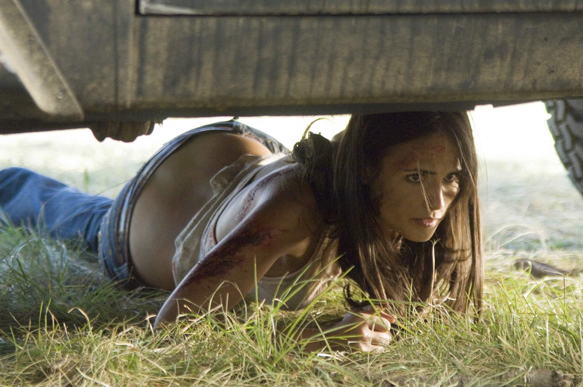 During the scuffle with Biker Dude, Uncle Monty had been shot in the leg, and Hoyt knows of only one cure – get Leatherface to chainsaw that sucker off. Of course, the legs are now not even, so Leatherface evens them up. Chrissie is finally caught and tied up at the dinner table, in the same chair Sally Hardesty will sit in, four years hence, with the rest of the Hewitts, plus an unconscious Dean and a tongue- and toothless Bailey. After slicing Bailey’s throat with a huge pair of scissors, Leatherface carries Chrissie to the basement, but she stabs him with a screwdriver and gets away. Dean wakes up and gets the drop of the Sheriff, where he knocks the bastard down and smashes his face into the floor, knocking out his front teeth. Just as Leatherface is about to find Chrissie in the slaughterhouse, Dean saves her, but gets a chainsaw through the back for his trouble. Chrissie manages to find the dead ex-boss’ keys and takes off in his car. Leatherface is in the backseat, of course, the guts her through the seat with his chainsaw. As she dies, Chrissie’s car goes off the road and she takes out a real cop on a traffic stop. Unhurt, Leatherface climbs out of the car and walks home. As a shoutout to the original film, John Laroquette reads the crawler just before the credits. 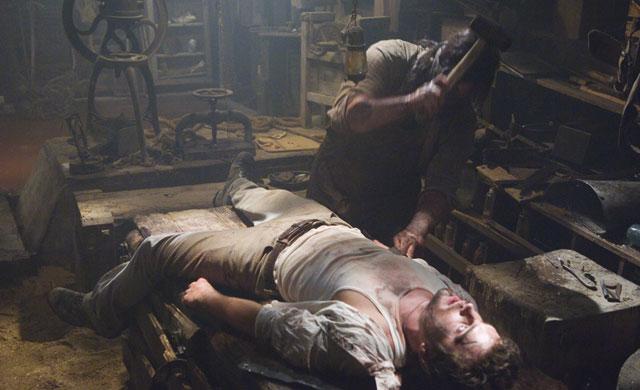 With the Hewitt family origins out of the way, the rest of The Texas Chainsaw Massacre: The Beginning plays out almost exactly like the original 1974 film, right down to Chrissie being tied up in the chair at the dining room table and an parting shot of Chrissie covered in blood like Sally Hardesty. The background story in an interesting one, though, and a must for any The Texas Chainsaw Massacre fan. See it, if only for the great Sheriff Hoyt lines. “Meat’s meat. Bone’s bone. Git ‘it done.” 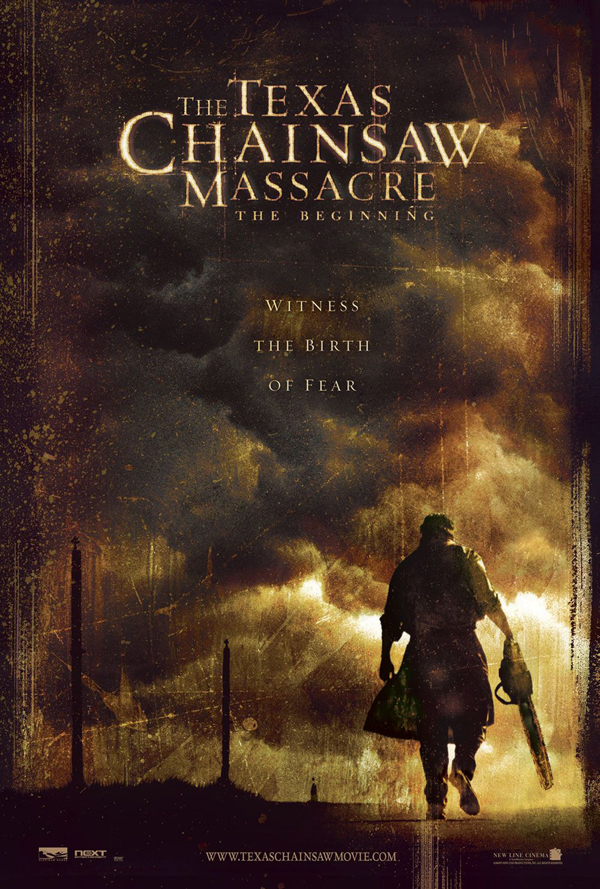 Purchase a copy of The Texas Chainsaw Massacre: The Beginning on Amazon