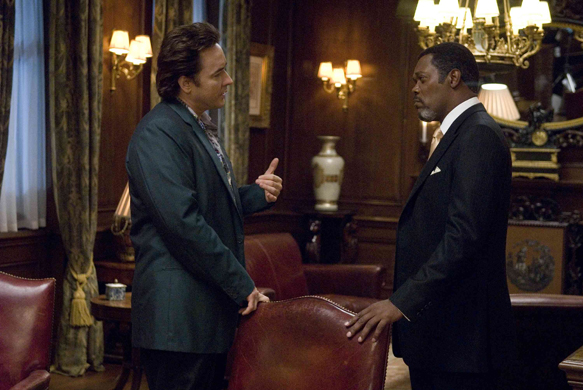 It all begins with the introduction of Mike Enslin (John Cusack: High Fidelity 2000, Love & Mercy 2014), a writer whose young daughter died. In part as a personal exploration, Enslin writes about the afterlife, searching for and subsequently debunking tales of paranormal encounters. At a book signing, he explains to his audience in disaffected terms his hope to find a genuine encounter with the supernatural. Instead, jaded and skeptical, he begins work on a new novel called “Ten Nights in Haunted Hotel Rooms.” He finds an anonymous postcard depicting The Dolphin Hotel on Lexington in New York City, which warns “Don’t enter 1408.”

Taking the message as a challenge, Enslin travels to The Dolphin and fights to book room 1408 despite an interview with hotel manager Gerald Olin (Samuel L. Jackson: Pulp Ficton 1994, The Avengers 2012). Olin explains fifty-six people perished in the room over the past ninety-five years, most lasting no longer than an hour. He describes the room as evil and begs Enslin not to proceed. However, Enslin insists and threatens a lawsuit if not allowed to stay. Olin gives his a bottle of cognac and reluctantly hands over the key to the infamous room. Enslin records his impressions and thoughts on a mini-recorder, describing the room as dull and decidedly un-supernatural when a clock radio in the bedroom bursts into song. “We’ve Only Just Begun” plays as the radio’s digital numbers flip to 60:00. The terror begins for the non-believing author.

Enslin relives the final experiences of former occupants of room 1408. A window sash slams on a woman. Suicides. Murders. Psychological action heightens and becomes personal when Enslin encounters his departed daughter Katie (Jasmine J. Anthony: Commander In Chief TV series,The Butterfly Room 2012) and a doppelganger of himself lures his estranged wife Lily (Mary McCormack: House Of Lies TV series, The West Wing TV series) to the Dolphin and the room. The temperature in the room drops to freezing levels, and a seeming earthquake shakes and tears the room apart. When he tries to escape the room, Enslin is thwarted. Doorknobs break off. Windows disappear. A courageous jaunt through the ventilation system results in a heart-stopping crawl when Enslin is pursued by another animated and angry former occupant. 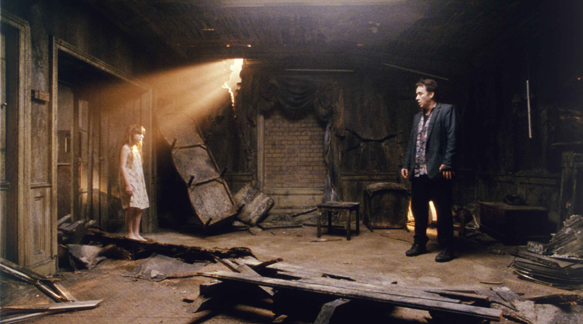 Enslin breaks the frame of a seascape, and waters rush into the room, flooding the place. Enslin emerges on a beach from an earlier scene in the film and reconciles with Lily. He writes a book about his horrifying “dream” of 1408, and when he mails it at the local post office, he recognizes some construction workers in the post office as staff from The Dolphin Hotel. The construction crew smashes the post office walls and reveals Enslin remains trapped in the ruined room 1408. The Carpenter’s song beckons, and Enslin finds the offending clock radio as it ticks off the final minute, only to reset to 60:00.

Enslin, nearly mad at this point, phones the hotel operator and pleads for his release. He is told he can relive the hour again and again or he can take the “express check out system.” A noose dangles, enticing Enslin to join the spectral occupants. However, Enslin decides if he is going to die, the room would perish with him. He makes a bomb of the bottle of Cognac gifted by Hotel Manager Olin and sets the place on fire. The alarms cause the hotel’s evacuation and his wife, Lily, is not able to enter the room.

Director Mikael Håfström (The Rite 2011, Escape Plan 2013) created several endings for the film. The version released in US and UK theatrical markets found Enslin died a hero who spared others the terrors of 1408, but others allow him to survive and live out life with Lily. Given a rating of PG-13, 1408 received mixed reviews from film critics. Many applauded its psychological overtones and the stunning performance by Cusack, who appeared in most every scene of the film. Others felt it fell flat by the end and felt let-down by the lack of typical gore and violence of the genre. 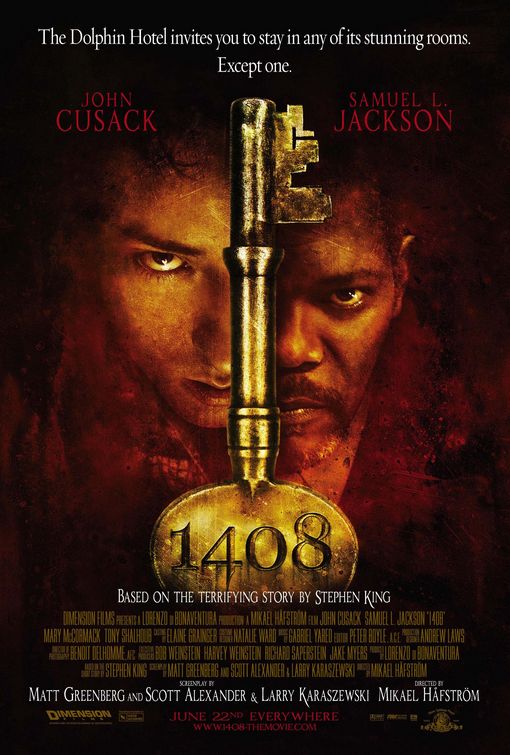 Purchase 1408 on Blu-ray/DVD on Amazon