This week in Horror movie history, back on June 27, 2003, England’s adrenaline-packed 28 Days Later burst onto the US cinematic scene. Initially released in the United Kingdom seven months earlier in 2012, the Danny Boyle (Trainspotting 1996, Slumdog Millionaire 2008) directed film first was introduced to American audiences at the Sundance Film Festival in January and soon spread like an infectious disease across the continent, viewers eager to see the film which was being dubbed a rejuvenation to the Zombie genre. 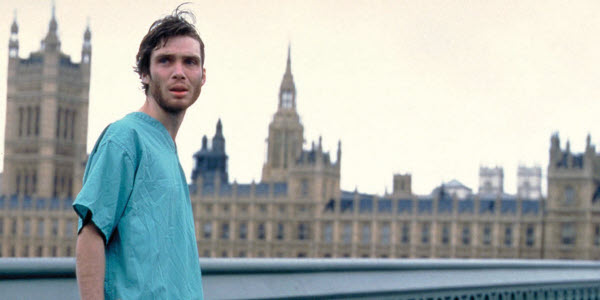 The film opens presenting three animal rights activists who broke into a research lab to free chimps. One is strapped ala Clockwork Orange before television sets depicting scenes of violence. A lab coat-wearing man discovers their invasion but is cut off before he could call for help. He begs the trio to leave the chimps, explaining they are infected with the incurable Rage Virus, but the woman opens a cage. The freed animal attacks her, infecting her. She in turn attacks the people in the lab.

Twenty-eight days later, a naked man named Jim (Cillian Murphy: Batman Begins 2005, Inception 2010) wakes from a coma in a London hospital to discover he is alone. Notices are pinned everywhere searching for loved ones, and old newspapers tell of London’s evacuation. Jim wanders into a church filled with dead bodies, and some not-so-dead. He survives an attack by fast-moving, “infected,” Zombie-like people with the help of Selena (Naomi Harris: Pirates of the Caribbean: Dead Man’s Chest 2006, Pirates of the Caribbean: At World’s End 2007) and Mark (Noah Huntley: Snow White and the Huntsman 2012, Dracula Untold 2014) who explain their belief the world is overrun with the infected. Only death stops their advances, and infection of the healthy takes place in mere seconds, the result of a bite, a scratch, or ingestion of bodily fluids.

Jim, Selena, and Mark discover Jim’s parents committed suicide, and while perusing their belongings, the infected attack with violent abandon. Mark is bitten, and Selena dispatches him. While fleeing from another group of infected, Jim and Selena are saved by Frank (Brendan Gleeson: Troy 2004, Edge of Tomorrow 2014) who wears riot gear and takes them in to his apartment where they meet his pre-teenaged daughter, Hannah (Megan Burns: Liam 2000). Franks plays a military broadcast on an old radio offering protection, and the group sets off to seek shelter. They take Frank’s cab through a tunnel, raid a grocery, syphon gas from a tanker, and sleep outside before reaching the blockade.

Frank becomes infected, but before he attacks, men in military uniforms riddle him with gunfire. They escort Jim, Selena, and Hannah to a mansion under the control of Major West (Christopher Eccleston: The Others 2001, Thor: The Dark World 2013) whose promised “cure” is waiting until the infected die out from starvation while he and his men lure women for the men’s pleasure and to “repopulate.” West keeps an infected man, Private Meiler (Marvin Campbell: Shelter 1998, Harry Brown 2009) in chains in a courtyard as a barometer for when the infected perish without food. When Jim tries to get his companions away from the lusty crew, he is imprisoned with another malcontent, Sergeant Farrell (Stuart McQuarrie: Trainspotting 1996, Hush 2008). Farrell believes the infection is confined to Britain, and once the quarantine is lifted and the infected die out, rescue will arrive. With soldiers executing Farrell, Jim escapes and attacks the compound, using the infected to his advantage, and frees Selena and Hannah before the men can gang rape them. Twenty-eight days later, Selena finishes sewing a sign to beckon a rescue plane, but with this, the credits role, leaving a sense of uncertainty. 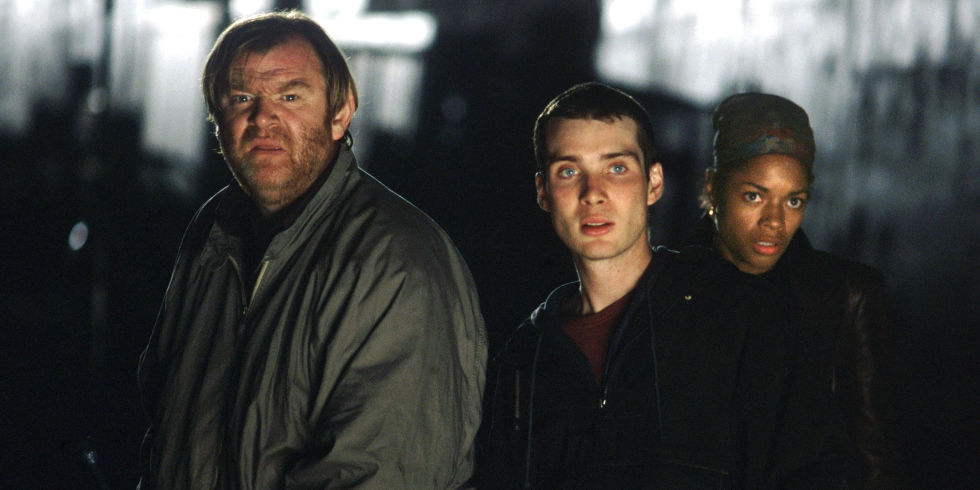 With an open ending that the theatrical edit produced, the DVD release of the film offers alternative endings, some filmed and the last storyboarded. In one version, Jim died after being shot, but the women survived to signal the plane. Another has the women survive physically, but Selena talking to a chicken as though it were Jim indicates she may not have made it through the experience mentally intact. In another ending, Jim dies while the women treat his gunshot wound, remembering the crash that initially left him comatose. The storyboarded version had Frank survive his infection when Jim gives up his blood for a total transfusion, but Boyle abandoned the idea as unrealistic.

Often misinterpreted as a Zombie film, 28 Days Later is really a story about an infectious disease outbreak and the download of societal systems that follow. Clearly influenced by the Zombie genre, Boyle and Writer Alex Garland quote George A. Romero’s “Dead” films throughout 28 Days Later, and they identify John Wyndham’s “The Day of the Triffids” and the video game “Resident Evil” as the story’s inspiration. Released a couple years in the wake of the September 11th, 2001 terrorists attacks, the missing persons flyers felt reminiscent of those posted by loved ones searching for those lost during the tragedy. With that said, while the film is primarily based in fiction, the atmosphere of a post-apocalyptic world was that much more terrifying.

Stylus Magazine called 28 Days Later one of the best Zombie movies of all-time and ranked at 456 in Empire’s 2008 list of the 500 greatest movies of all-time. In addition, Bloody Disgusting placed the film as number seven in their Top 20 Horror Films of the Decade, saying, “Zombie movie? Political allegory? Humanist drama? 28 Days Later is all of those things and more – a genuine work of art…” With a ton of accolades, 28 Days Later was a very different kind of film. Many would say it opened the door for a new generation of post-apocalyptic, survival type films/television series. In fact, many of the images presented in 28 Days Later are reminiscent of the mega-hit AMC series The Walking Dead. For example, like Jim, Rick Grimes from The Walking Dead also wakes in a hospital, abandoned and confused. Also, the film explores the idea safety does not necessarily mean actual safety, and sometimes, the living are more dangerous than the animated infected. 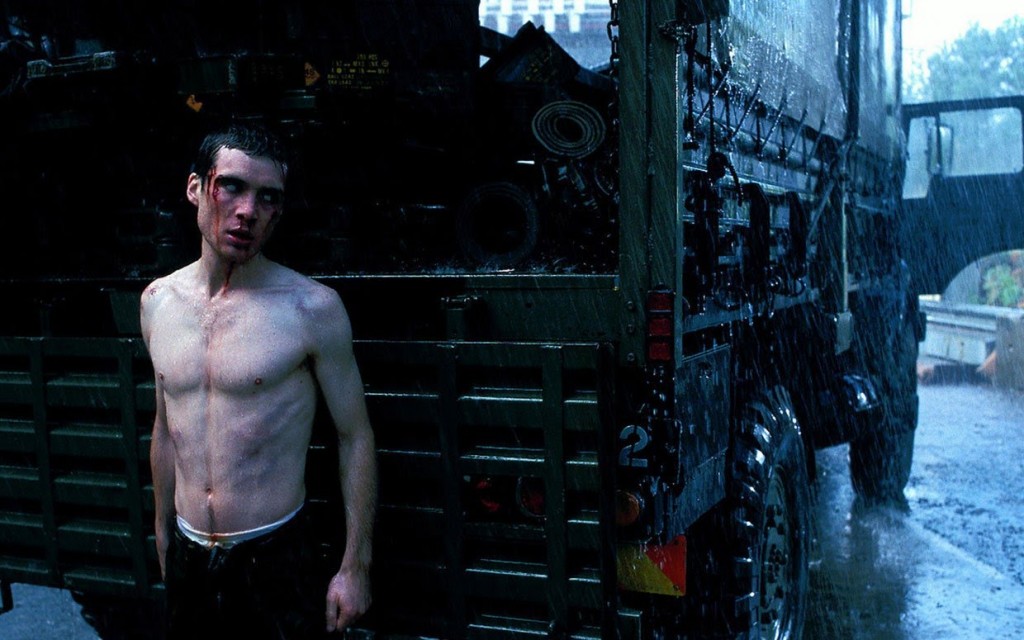 In addition to the frightening story, 28 Days Laters also included a fantastic soundtrack composed by John Murphy and featuring heavily edited version of the song “East Hastings” by Godspeed You! Black Emperor for the epic scene in the beginning of the film when Jim awakens to walk the abandon streets of London. Furthermore, the scene where Jim attacks the compound near the closing has the tension explode with compliments to the dazzling instrumental “In the House, In a Heartbeat.” Sadly movie soundtrack buffs who flocked out to purchase the CD were disappointing to find that the Godspeed You! Black Emperor cut was not included on the soundtrack. This is because Boyle unfortunately could only gain rights to the track for the film. Fortunately, the lengthy original is available via Godspeed You! Black Emperor’s 1997 debut album F♯ A♯ ∞.

Those eager for more of this terrifying story had their wish granted when 28 Weeks Later, starring Robert Carlyle and Rose Byrne, was released in 2007. A worthy sequel, the film did not bare as well as the original, but still left audience’s wanting yet another chapter. It has now been nearly a decade since 28 Weeks Later, will there ever be a 28 Months Later? Time will only tell, but history shows 28 Days Later is one of modern Horror’s all-time greatest. 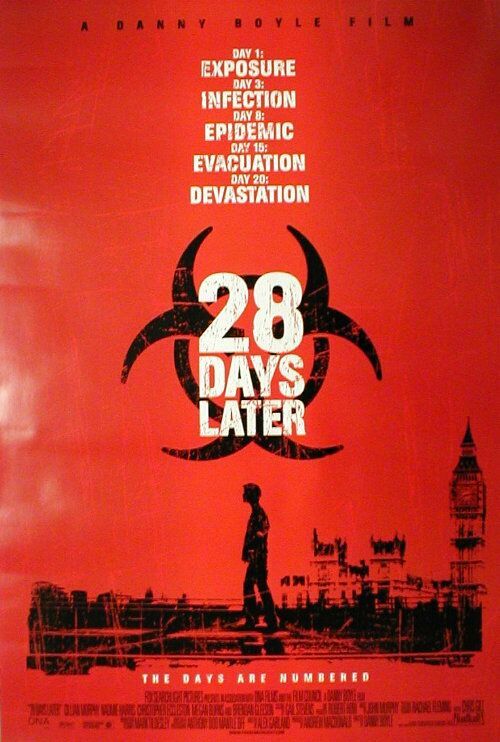