This Week in Horror Movie History – A Nightmare on Elm Street 4: The Dream Master (1988)

This week in Horror movie history, back on August 19th of 1988, A Nightmare on Elm Street 4: The Dream Master haunted movie goer’s dreams. Coming a year after the massive box office success of A Nightmare on Elm Street 3: Dream Warriors, which ran neck and neck with 1984’s original A Nightmare on Elm Street as the most popular in the franchise, New Line Cinema was hard pressed to replicate that success. For the new film, they brought Dream Warriors’ survivors: Kristen Parker played this time by Tuesday Knight who stepped in place of Patricia Arquette, Rodney Eastman reprising his role as Joey, and Ken Sagoes reprising his role as Roland Kincaid, to help a new crop of teens survive the resurrected Freddy Krueger, with Robert Englund once again in the make-up and bladed glove. 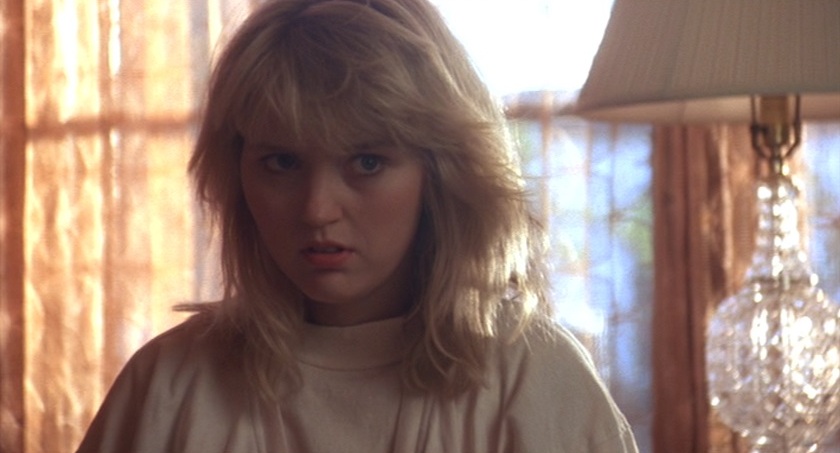 Directed by Renny Harlin (Die Hard 2 1990, Exorcist: the Beginning 2004), he would become the fourth director in four films to work on the Nightmare series; the story goes he would not take no for an answer, anxious to have the gig. Co-produced by New Line Cinema founder Robert Shaye and Rachel Talalay (Hairspray 1988, The Borrowers 1997), they worked from a script co-written by Brian Helgeland (976-Evil 1988, 42 2013) and Jim Wheat as Scott Pierce (The Fly II 1989, Pitch Black 2000) based on characters created by the late Wes Craven (The Hills Have Eyes 1977, Red Eye 2005). Striking it gold, the new film would be the highest grossing in The Nightmare series for fifteen years until 2003’s Freddy vs Jason debuted, thus cementing A Nightmare on Elm Street 4: The Dream Master status in Horror movie history.

When it came to bringing back the Dream Warriors survivors, they wanted beefier parts, but wound up just being a vehicle for Freddy’s resurrection. Even then, the reunion was not planned to be without Arquette. Replaced by Tuesday Knight, to Knight’s credit, she landed the Kirsten role as well as getting to sing the film’s theme, “Nightmare,” during the opening credits, a first for a Nightmare film. With a lot of pressure to take over for Arquette, she has gone on to become one of the beloved characters in the series fans’ eyes. 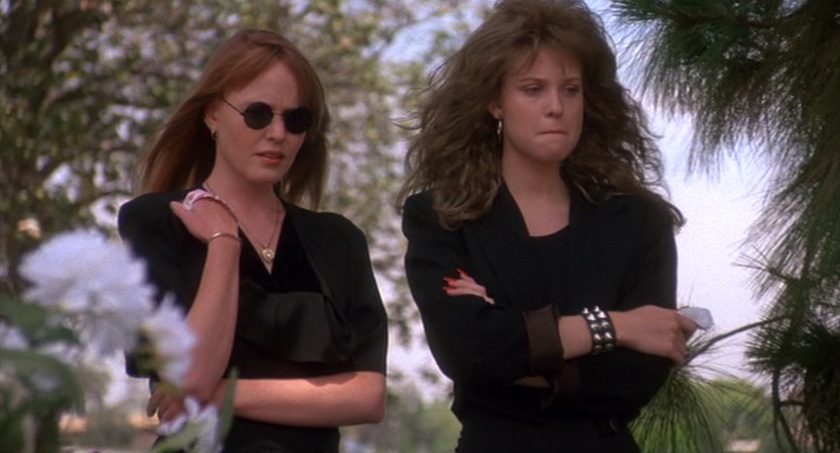 Although the film clips, the editing let the characters breathe, so audiences care even though it is predictable who is going. Then when nightmares come, the kills are drawn out for maximum affect. That being said, The Dream Master had perhaps the most unique feel of any in the series at the time. It was scary at times, but it was also funny, and not overly gruesome. In fact, many may have considered it an acceptable date movie at the time, perhaps helping its profitability. Other aspects which almost may have helped the film’s more commercial appeal was the exceptionally unique soundtrack. It was a soundtrack all over the map, featuring the aforementioned Tuesday Knight opener “Nightmare,” Dramarama’s “Anything, Anything (I’ll Give You),” Billy Idol’s “Fatal Charm,” as well as The Fat Boys’ “Are You Ready for Freddy.” In fact, The Fat Boys song even had a music video including Freddy rapping along with audio of Heather Langenkamp’s infamous line, “Don’t fall asleep.”

When it finally hit theaters in the late summer of 1988, competing with American Western hit Young Guns which dropped a week earlier, A Nightmare on Elm Street 4: The Dream Master ranked at number 1 at the box office. The websites, Rotten Tomatoes and Internet Movie Database, has the film with 56% “Fresh” rating and 5.7/10 respectively while staying in the Pop culture’s eye with merchandise being sold officially and fan-made. Media has also kept the film in the mind’s eye through references in TV, other films, music videos, and video games such as The Golden Girls episode, “Empty Nests” in 1987 when the girls go to see part 4 telling Rose that it is not necessary to have seen parts 1, 2, and 3.  Another example is in 1990’s Ghost when the poster is in a window.  The legendary Rap group, The Fat Boys released a video for their song “Are You Ready for Freddy” that played during the ending credits of Dream Master. 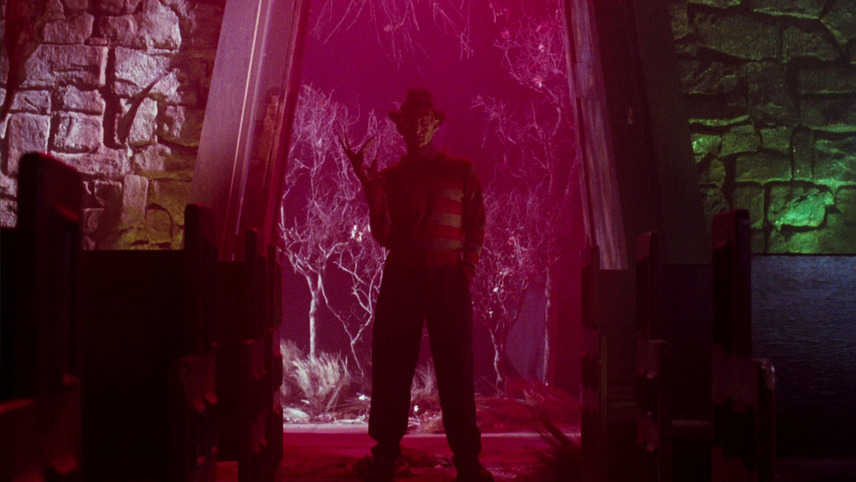 The film has also made its way onto video game consoles with 2011’s Mortal Kombat, where Freddy made an appearance. Finally, A Nightmare on Elm Street 4: The Dream Master’s success warranted four more sequels, which includes A Nightmare on Elm Street 5: The Dream Child. Another quick sequel, The Dream Child hit theaters almost a year later with Lisa Wilcox returning once again as Alice, solidifying herself as one of few main characters to survive onto A Nightmare on Elm Street sequel. In 2010, the franchise was rebooted with Jackie Earle Haley taking the Freddy mantle with mixed reviews. Still relevant, the franchise is supposed to be getting yet another jump-start with Kevin Bacon reportedly rumored to being played Freddy Kruger…proving in dreams… Freddy is forever! 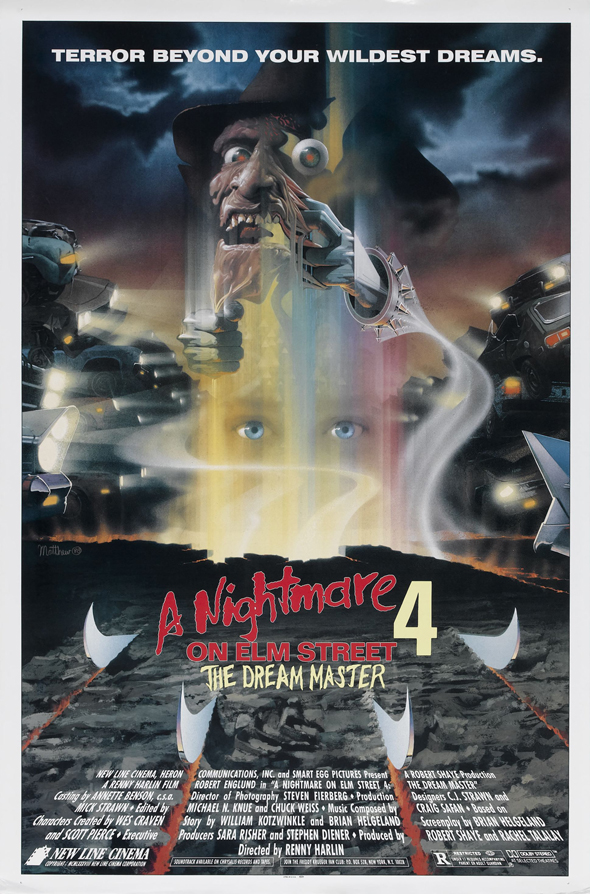 Purchase A Nightmare on Elm Street 4: The Dream Master on DVD on Amazon