This week in Horror movie history, back on May 25, 1979, Alien hit theaters just days prior to the unofficial start of summer. There are a handful of films that come to mind when asked what truly defines a genre, the now legendary film Alien is one of them. Made on a modest budget of an estimated $11 million, the film dominated the box office with grosses of between $104.9 and $203.6 million to become one of the Horror genre’s seminal films that many Horror fans, or starting movie fanatics for that matter, get their start with. 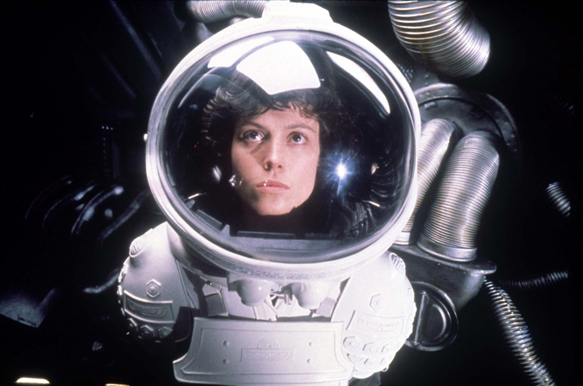 Woken from stasis, the Nostromo’s crew of Captain Dallas (Skerritt), Executive Officer Kane (Hurt), Navigator Lambert (Cartwright), Science Officer Ash (Ian Holm: Chariots of Fire 1981, The Hobbit: the Battle of the Five Armies 2014), Warrant Officer Ripley (Weaver), and Engineers Parker (Yaphet Kotto: Live and Let Die 1973, Freddy’s Dead: the Final Nightmare 1991) and Brett (Stanton) hear a signal.  What does it mean?  When they find out, a race between life and mostly death ensues.

Screenwriters, the late Dan O’Bannon (Heavy Metal 1981, Total Recall 1990) and Ronald Shusett (Total Recall 1990, Minority Report 2002) started writing a script in college while studying cinema. It started to become evident it was a Sci-Fi/Horror piece that paid homage to earlier Sci-Fi Horror films like 1951’s The Thing from Another World, 1956’s Forbidden Planet, and 1956’s Planet of the Vampires, among others. When the script was almost finished, O’Bannon and Shusett started shopping to studios, which all rejected until the 20th Century Fox offshoot, Brandywine, took it with some rewrites. However, it was not until 1977’s Star Wars was released and proved profitable that 20th Century was on board with eyes to make another Star Wars. 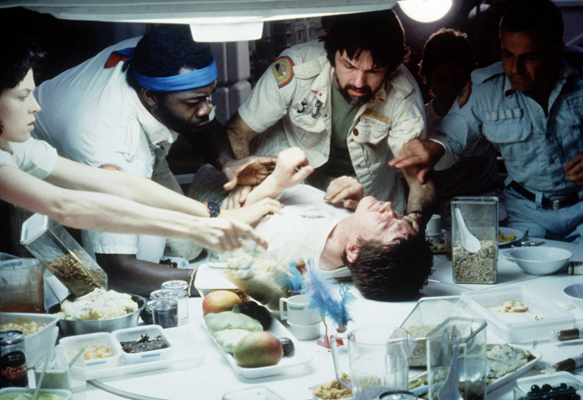 Finally appearing, the film would see the light of day, O’Bannon was set to direct, but 20th Century had other ideas. They had a list of directors that were known for Sci-Fi, but O’Bannon, Shusett, and Brandywine shot them down, not wanting to make a B-movie.  Then, they saw 1977’s The Duellists, which was directed by an up and comer, Ridley Scott.  They were impressed, and offered him the gig, which he took.

Seeming as if everything was settled, immediately, 20th Century and the production crew butted heads on the film’s look, saying the artwork from the late renowned surrealist artist, H.R. Giger, showed a darker movie than they wanted.  The crew dug in their heels, and won that battle, going so far as to actually hire Giger. Also, going against norms, older actors and actresses were cast to give the Nostromo’s crew a worn look with the age range being 46-29, with Weaver the youngest. With the cast tacked down and the details at least carved out, filming began. The fourteen week shoot started at London’s Shepperton Studios on July 5th and worked to Berkshire’s Bray Studios, where models were built, through October 21st of ’78.  Production went off without a hitch except the spacesuits the actors and actresses wore had no ventilation, so oxygen had to be readily available. Then, Weaver wound up being allergic to the concoction used for sweat.

Another twenty weeks went into editing and post-production with Terry Rawlings returning from working with Scott on The Duellists, creating a slow burn that worked effectively for when everything hit the fan. Also, the run-time was cut from over three hours to under two hours. When it was time to score Alien, the crew tapped legendary composer, the late Jerry Goldsmith (The Omen 1976, Hollow Man 2000); however, differences in thematic ideas came up, a few reworks were done, they agreed to disagree, and the score was finished with Goldsmith having lukewarm feelings about his work at best. Scott, on the other hand, liked it immensely. The score would be nominated for a Golden Globe Award for Best Original Score, a Grammy Award for Best Soundtrack Album, and a BAFTA Award for Best Film Music that year’s awards season. 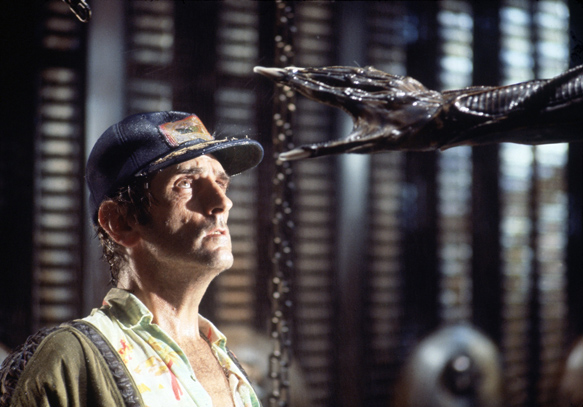 At release, Alien met mixed reviews, because it was not Star Wars by any means, and critics saw 20th Century was trying to capitalize on its popularity. However, like most movies the critics dislike, audiences dug the film, earning an upwards of $203.6 million. The 1979 awards season saw Alien win the Academy Award for Visual Effects as well as being nominated for Best Art Direction.  It won Saturn Awards for Best Science Fiction Film, Best Direction, and Best Supporting Actress for Veronica Cartwright while being nominated for Best Actress, Best Make-up, Best Special Effects, and Best Writing. The British showered the film with as well with BAFTAs in Best Costume Design, Best Editing for Terry Rawlings, Best Supporting Actor for John Hurt, and Most Promising Newcomer to Leading Film Role for Sigourney Weaver. Several other societies gave love to the film as a crowning achievement.Finally, in 2002, Alien was bestowed with the highest honor a film can get when the National Film Preservation Board of the United States inducted it into the National Film Registry of the Library of Congress for historical preservation.

Since its success, there have been three sequels; albeit, without Scott at the helm, but famous directors including James Cameron, David Fincher, and Jean-Pierre Jeunet. Also, Alien has become a merchandising bonanza with Comics, action figures, DVDs, and clothes to name a few. Above all the facts, the film showed perhaps the most terrifying look at Alien-like form to audience’s, no doubt causing many sleepless night for adults and children. While absolutely a Sci-Fi leaning film, the Horror is without question the most pronounced quality of the film. Finally, Scott has come back to the Alien fold with the forthcoming Alien: Covenant, a sequel to his 2012 film Prometheus. Scott claims it will have two more sequels before tying into the 1979 original; thus, ensuring the original’s cult status will live for centuries to come. 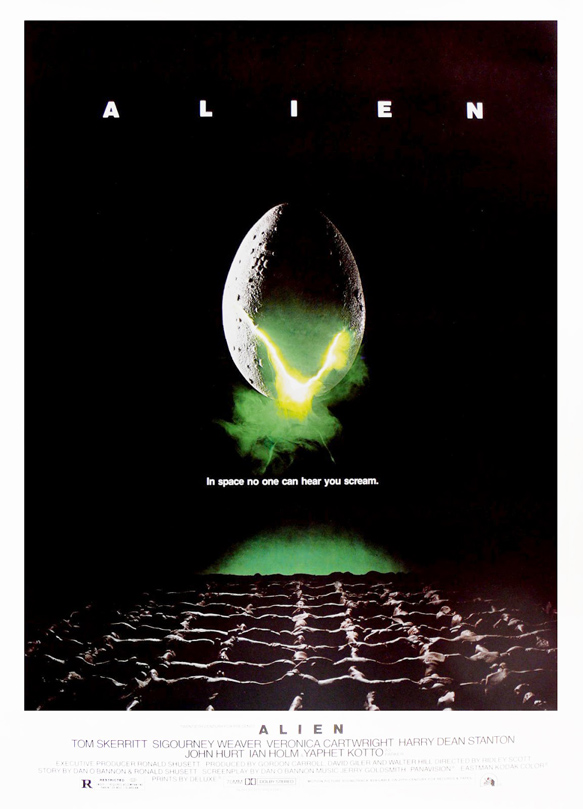 Purchase Alien on Blu-ray/DVD on Amazon