This week in Horror movie history, Amityville 3-D was released on November 18, 1983 through Orion Pictures. Also known as Amityville III: The Demon, this third movie in the Long Island Haunted House franchise was directed by the late Richard Fleischer (Soylent Green 1973, Conan the Destroyer 1984) from a screenplay written by David Ambrose (The Final Countdown 1980, D.A.R.Y.L. 1985) under the pen name William Wales. Stephen F. Kesten (Marathon Man 1976, Thinner 1966, produced the film while The Hunger’s 1983) Howard Blake composed the score. Special effects guru Jeff Jarvis (Poltergeist 1982, Firestarter 1984) teamed up with makeup artist John Caglione, Jr. (The Blob 1988, The Dark Knight 2008) to create the haunting effects to go along with the ArriVision 3D process, coordinated by Tibor Sands, that was used to add that surreal third dimension to the already creepy atmosphere. The movie stars Tony Roberts (The Taking of Pelham One Two Three 1974, Annie Hall 1977), Tess Harper (My Heroes Have Always Been Cowboys 1991, Christy TV series), Full House’s Lori Loughlin, and Meg Ryan in her first major film role. Like the Amityville films before it, the exterior shots of the house were filmed at the same house in Toms River, New Jersey that had been previously converted to look like the infamous Amityville abode on 112 Ocean Avenue. 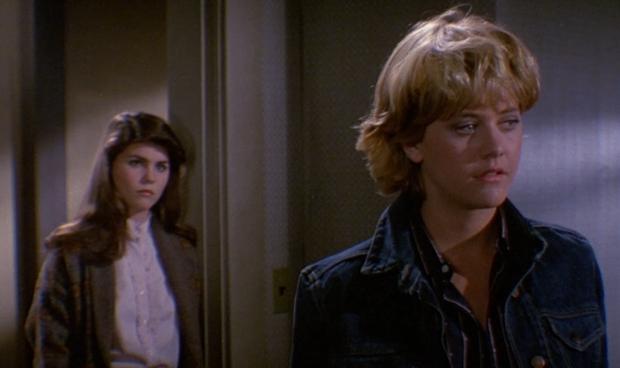 The film begins as Amityville journalist John Baxter (Roberts) and his partner Melanie (Clark) debunk evidence of ghosts at 112 Ocean Avenue during a séance with some local con artists. A true skeptic, John cannot pass up the bargain that is the old DeFeo home and buys it for a song from Real Estate agent Clifford Sanders (John Harkins), despite the troubles that the previous occupants had dealt with in the time since the original murders and the fact that Clifford fell through some rotten boards and into an abandoned well in the basement, barely escaping with his life. John tells his aggravated, soon-to-be ex-wife Nancy (Harper) and daughter Susan (Loughlin) about his new home, the latter picking the room with the eye windows as her bedroom. Meanwhile, Melanie develops some photos she took during the initial séance investigation and sees that Clifford looks like a rotting corpse in them. Later, the agent checks the house over one last time before the final sale and is killed when he gets locked in an upstairs room and is attacked by the house’s infamous flies. John sees the Real Estate agent’s death as nothing more than a stroke and continues on with the purchase.

Melanie goes to the house to wait for John but is frightened by his maid, and after the housekeeper leaves, the house itself drives the poor girl to hysterics. Although perplexed by the things happening around him, John is not convinced that the house has anything to do with the strange events. He leaves Melanie, now calm, to her work with the photographs from the séance, and once alone, she finds a demonic face staring at her from the pictures. Now convinced that she has evidence of the evil in his house, Melanie races to tell John, only to be killed in a fiery car crash caused by a buzzing insect. Still unconvinced, John believes her death was also an accident. 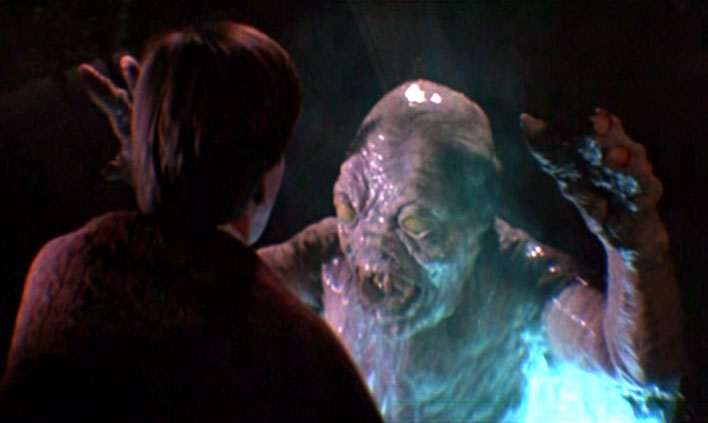 Defying her paranoid mother, Susan, her friend Lisa (Ryan), and their boyfriends use a Ouija board in the house after messing around in the basement, where Lisa claims the abandoned well was a portal to Hell. After goofing around with the board, they ask if anyone in the room is in danger, and the planchette spells out Susan’s name. Later, they decide to go out on the lake in a motorboat, and when Nancy arrives at the house, only finds a dripping, silent Susan walking up the stairs. Outside, John sees the teens carrying his daughter’s lifeless body off of the boat and onto the shore. Insisting that she saw Susan go upstairs, Nancy cannot accept that the girl is dead, even after her funeral.

This death and Nancy’s refusal to believe her daughter is dead finally gets through to John, and the journalist enlists the help of Dr. Eliot West and his team of paranormal investigators to prove if Nancy saw Susan’s ghost or not. During their investigation, they all hear Susan’s voice call to Nancy, and the crew follow the distraught mother as she follows a purple light down to the basement, where the abandoned well has now filled with boiling, unearthly fluid. Dr. West tries to confront the evil from the well to save Susan’s soul and the demon that Melanie had seen in the photographs pops up out of the fluid, burns the doctor’s face and drags him down to Hell. The house begins attacking its occupants as objects fly around the rooms, killing many of Dr. West’s team members. John, Nancy, and a few others escape through a window as the house explodes. As they flee, the now fiery well burbles as a glowing fly buzzes out its depths and into the scrolling credits.

As for the 3-D aspect, the amount of actual 3-D elements were few and far between, with only a few scenes incorporating the effect, including a Frisbee that flew toward the screen, a pole that penetrated a car window, a skeleton reaching out its arms, and a set of folding French doors that flew across a room. Of course, the movie’s opening title was partially in 3D as the large block letters of “Amityville 3D” shot outward at the audience. The ArriVision 3-D process, created with a special twin lens adapter fitted on the camera that actually divided the 35mm frame in half right down the middle, a trick that slightly skews the left eye and right eye image on the screen. The polarized glasses given to audience members by the box office helped to complete the illusion that the image was actually popping out at them. Along with Amityville 3-D, both Jaws 3D (1983) and Friday the 13th Part III (1982) used the ArriVision technique. 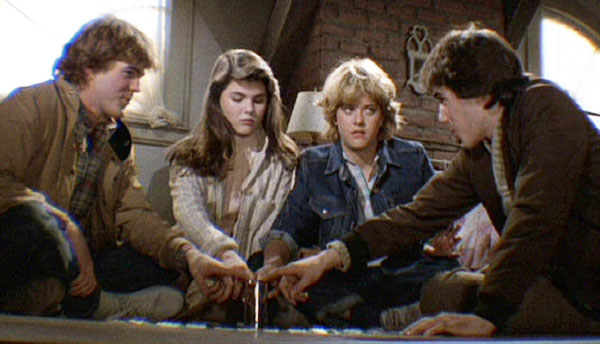 This was the last film in the Amityville series to be released theatrically (at least before the 2005 remake), as the later sequels all went straight to video, mostly due to the financial and critical bomb that Amityville 3-D became. Rotten Tomatoes gives the film a lowly 0% rotten score and movie critic Gene Siskel said in his Chicago Tribune review, “The 3-D added nothing to the experience. All you ended up with was eye-strain.” So far, there has only been a UK Region 2 DVD release of the film in which the 3-D effects were incorporated, although there was a 2013 3-D effected Blu-ray released in the US as a part of the Amityville Horror Trilogy through Scream Factory. In 2000, the score for the film was released in CD as part of the Original Orchestral Score for Flash Gordon (1980). Although it did finish at #1 at the box office on its opening weekend, as word got around that the film was not a direct sequel to the first two and Amityville Horror fans left theatres with disappointed hearts, the second weekend showed a drop to #5 before finally falling off of the charts altogether, bringing in just over six million dollars in total during its theatrical run. Despite – or possibly because of – the movie’s 3D effects, the film was a box office failure, although die-hard Horror fans still love it, flaws and all. 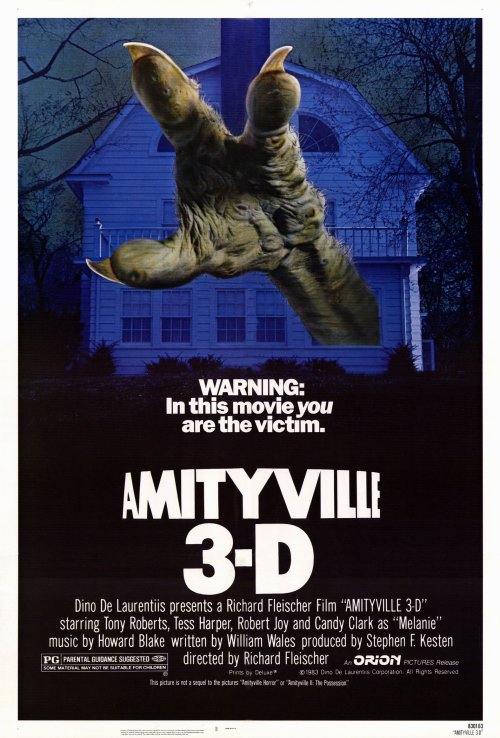