This Week in Horror Movie History – Amityville II: The Possession (1982)

This week in horror history Amityville II: The Possession was released September 24th, 1982 in theaters across the USA.  Coming three years after the original hit film, Amityville II: The Possession was directed by Italian director Damiano Damiani (Confessions of a Police Captain 1979) and written by Tommy Lee Wallace (Halloween III: Season of the Witch 1982). The makeup and FX were amazingly done by John Caglione, Jr., the genius behind Heath Ledger’s Joker in The Dark Knight (2008). The creepy music for both the first and second Amityville movies was composed by Lalo Schifrin, who was also responsible for the Mission: Impossible (1966) theme song.  The film garnered a total of $12.5 million, with an opening weekend of $4.1 million.  As of 2014, Rotten Tomatoes gives Amityville II: The Possession a 7% positive review rating, but hardcore horror buffs may beg to differ. 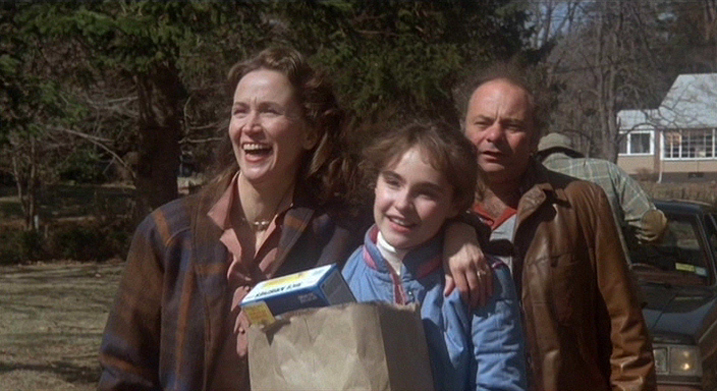 Technically a prequel,  Amityville II: The Possession was loosely based on the book Murder in Amityville by Hans Holzer. The book describes the Ronnie DeFeo, Jr. version of events that took place at 112 Ocean Avenue prior to George and Kathy Lutz moving in. Ronnie DeFeo, Jr. was convicted of slaughtering his entire family one night in November 1974, and blames his actions on voices he heard in his head. Some inconsistencies with the original story kept the movie from getting the “based on a true story” treatment, but anyone familiar with the DeFeo murders will recognize the similarities right away.

Filmed at the same location as the first Amityville Horror, Amityville II: The Possession starts off with the arrival of the dysfunctional Montelli family at their new home on Ocean Avenue. Dad, Anthony, is played by Burt Young, loveable Pauly from the Rocky movies. Anthony is an angry bully, ordering his four children and wife around like a drill sergeant and reprimanding them for the slightest of offenses. Mom, Delores, (Rutanya Alda) tries to protect her children from his wrath, but this sometimes backfires when he sets his abusive sights on her. The two oldest children, Trish (Diane Franklin, sweet Monique from Better Off Dead 1985) and Sonny (Jack Magnar) are uncomfortably close, almost flirting as they hang out in Sonny’s new room. The youngest siblings, Jan and Mark (real life siblings Erika and Brent Katz), are also very close, playing ‘plastic bag over the face’ games, making them more than disturbing. 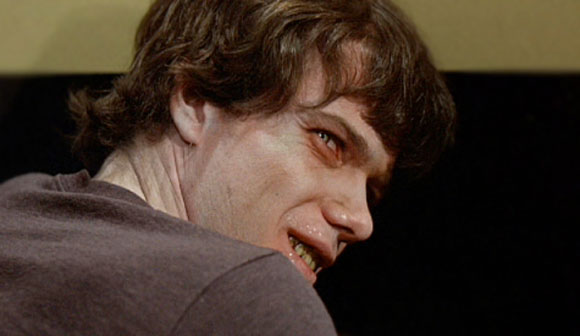 From the moment they move in, something supernatural makes itself known. First of all, the windows are nailed shut from the inside. One of the moving men finds evidence of a “busted sewer pipe” behind a hidden door – water, flies and feces are pouring into the basement. The entity within can now escape, and we get its POV as it floats around and checks the new people out. When it comes across a crucifix hanging on the wall, it whips a tablecloth off of the dining room table and covers the offensive artifact. Later that night, the presence uses paintbrushes in the younger kids’ room to paint a giant, flying pig on the wall, along with the words, “Dishonor thy Father.” This sends dad into freak-out mode. He gets his belt and starts whipping the children for defacing his new house. The rest of the family defends the children, and Anthony ends up with his own rifle crammed against his neck in an open act of defiance by Sonny, something that had never happened before. Later, a creepy voice out of Sonny’s Walkman headphones (voiced by Anita Keal, Sondra Lee and Alive Playton) asks him why he did not pull the trigger.

Visiting for a house blessing, Father Adamsky (James Olson) sets even more activity into motion, both within the family and supernaturally. Dad is agitated at the Church’s intrusion, and the entity blows up a refrigerator. When the Montellis return to church that night, Sonny is left alone. He is confronted with the presence, who swirls around his head, chases him throughout the house, and no weapons can protect him. Sonny retreats to his room, where the entity crushes his stomach into the bed and turns his head into a bulging, pulsing mass as it fully possesses his body. Later that night, Sonny visits his sister, where he convinces her to give in to the sexual attraction they feel toward each other, and they make out on her bed. She eventually confesses these sins to the priest.

Worried about Trish, the priest calls on his Chancellor, played by Leonardo Comino (Scary German Guy from The Monster Squad 1987), but gets no help from the church. Convinced to walk away from the Montellis, Adamsky later regrets this decision. The night of Sonny’s birthday party, he ignores a call from Trish, who is frantically worried about her brother. Later, he dreams about a demonic looking Sonny skulking from room to room throughout the Montelli home, shooting one family member after another, including his little brother and sister. The dream ends with Trish pinned against the stairs by Sonny, pointing their father’s rifle into her neck as she pleads for her life. Waking up panicked, Adamsky hops in his car and speeds to the Morelli home. When he arrives at the house, the he finds that the dream was reality, and he is just in time to see the bodies of four of the Montellis being carried out of the house and Sonny being arrested. His feelings of guilt over ignoring Trish’s phone call pour off of him. 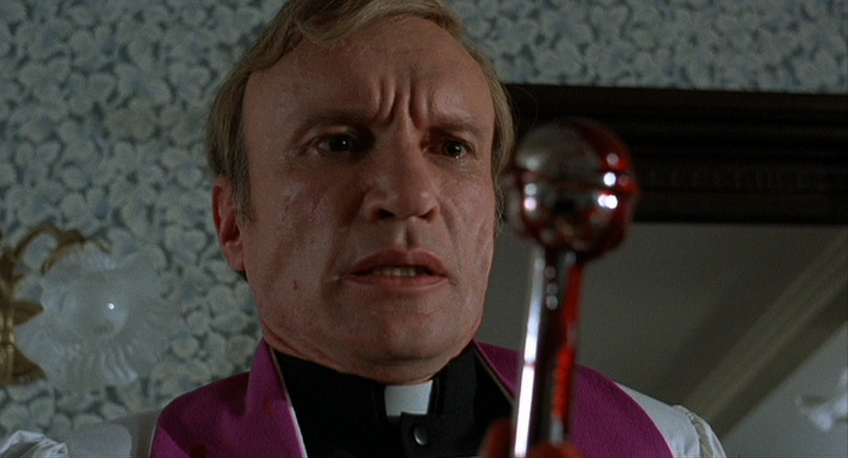 The film takes a left turn as the focus shifts from the haunting of the Montellis to the exorcism of Sonny. Father Adamsky feels that the only way to assuage his guilt for ignoring Trish’s pleas is to expel the demon that he knows has possessed the boy. He breaks weakened Sonny out of jail and tries to bring him to the church, but Sonny escapes. The battle for Sonny’s soul ends back at 112 Ocean Avenue, where the Father has followed the boy, and pleads with God to let the evil entity take him instead. We see the demon burst out of Sonny’s body in a head bulging, face ripping mastery of special effects. As Sonny rises from the floor in a Christ-like pose of absolution, the police arrive to take their escaped prisoner back to jail. The movie ends with the Priest on the floor of the house, the veins in his hands pulsing demonically. The camera pans the now empty house, a ‘For Sale’ sign propped up in the front yard.

The special effects in Amityville II: The Possession are some of the best for its time. The pulsing skin bulges are excellent and hold up to present FX. The ending scene of the demon tearing its way out of Sonny’s body is amazing, on par with the famous transformation scene from The Beast Within (1982). Between Jack Magnar’s creepy acting and some intense makeup effects, the progressive deterioration of Sonny as the entity took hold of his soul is something to keep viewers up at night and checking to make sure the windows are not nailed shut. 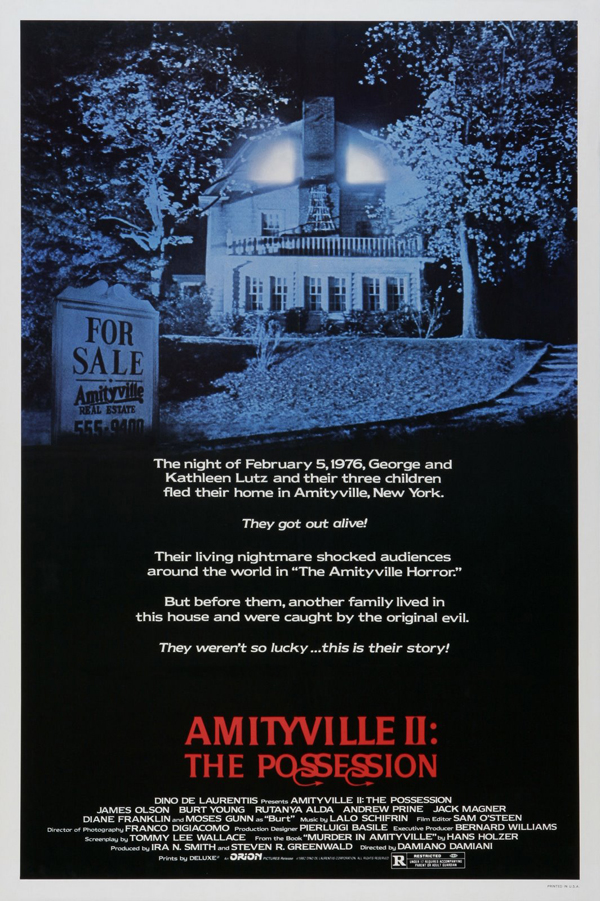 Purchase a copy of Amityville II: The Possession on Amazon here