This week in horror movie history, on December 20th, 1974, Canadian Horror film Black Christmas hit theaters just in time for the holidays. Distributed through the United States by Warner Bros., Black Christmas came out forty years ago this month, a full four years before Halloween and six years before Friday the 13th, making it one of the first slasher films, even though Director/Producer Bob Clark (A Christmas Story 1983, Porky’s 1982) considers it to be more of a psychological horror. Starring Olivia Hussey (Romeo & Juliet 1968, IT 1990), Margo Kidder (Superman 1978, The Amityville Horror 1979), Keir Dullea (2001: A Space Odyssey 1968, The Good Shepherd 2006), John Saxon (A Nightmare on Elm Street 1984, From Dusk Til Dawn 1996), Andrea Martin (SCTV 1981-1984, Wag the Dog 1997), Lynne Griffin (Dream House 2011, Strange Brew 1983), Art Hindle (Invasian of the Body Snatchers 1978, The Brood 1979) and Doug McGrath (Twilight Zone: The Movie 1983, Pale Rider 1985), Black Christmas was written by screenwriter Roy Moore (The Last Chase 1981) and composed by Carl Zittrer (Moonstruck 1987, New Jack City 1991), who said he created the bizarre music score by tying combs, knives and forks to the strings of the piano to distort the sound of the notes. Warren Keillor (Jason X 2001, Prom Night 1980) was in charge of special effects. Filmed in Ontario, Canada, Black Christmas is also known as Silent Night, Evil Night, Stop Me and Stranger in the House. Billy’s point of view was shot by cameraman Albert J. Dunk (Class of 1984 1982, The Incubus 1982) attaching the camera to his shoulder as he acted out the scenes. Any shots of the killer on film are actually Dunk, although Clark has stated that he could not remember whose eye was used for the shot when Jess sees Billy staring at her from behind the door. The prank calls were voiced by Clark, Nick Mancuso (Under Siege 1992, Ticket to Heaven 1981) and an unnamed actress. Actress Lynn Griffin, who played Clare, revealed that, while filming the scenes with the bag wrapped around her head, she breathed by cutting a hole in the plastic and stuffing the opening into her mouth. The fur coat that Art Hindle’s character, Chris, wears during the film is his own. Olivia Hussey took the role of Jess on the advice of a psychic, and was once told by Steve Martin that this movie is one of his favorites of all-time. Shot in only forty days, Black Christmas is considered the first film to have the killer call from inside the house. 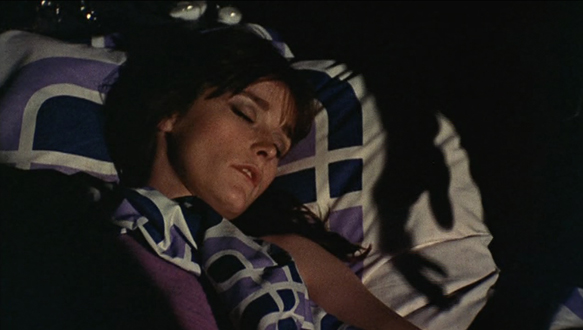 It is winter break, and college girls Barb (Kidder), Jess (Hussey), Clare (Griffin) and Phyl (Martin) are having a Christmas party in their sorority house as a creepy mouth breather climbs up onto the house roof and makes his way into the attic. The girls receive repeated calls from a lunatic who calls himself Billy, and when the aptly named Barb tells the guy off, he threatens to kill them all before hanging up. Uptight Clare gets offended by Barb’s acerbic wit and goes upstairs to finish packing, but she barely makes it through her bedroom door before she is attacked by the mouth breather and asphyxiated by a clear dry cleaning bag. The way the bag is pulled so tightly to her face and drawn deeply into her mouth and throat show her struggle to breathe during her fight, and make for a horrible, memorable image. When Clare’s father (James Edmond) cannot find her to bring her home for the holiday, he gets Barb and Phyl and they go to the police. The clueless Sergeant Nash (McGrath) is no help, so they recruit Clare’s boyfriend, Chris (Hindle) to call on his buddy, Lt. Fuller (Saxon), to take them seriously. 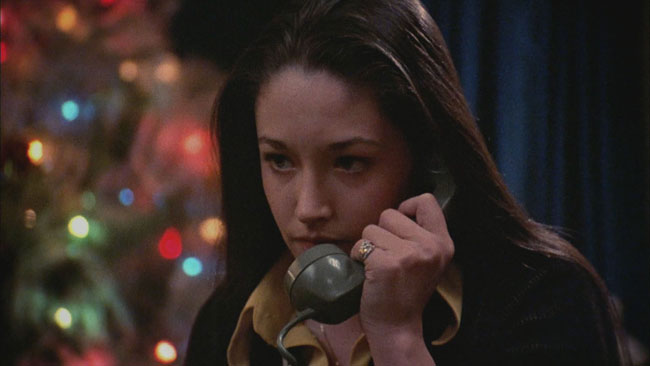 Meanwhile, Jess is meeting with her aspiring pianist boyfriend, Peter (Dullea), to let him know that she’s pregnant and planning on having an abortion. The gold cross hanging around her neck should be enough of a clue to Peter how hard this decision is to make for her, but he lobs every guilt bomb he can think, going so far as to threaten her. Girls start dropping like flies – a thirteen year old girl is found dead in the park across the street, Barb is stabbed in her own bed by the glass horn of her collectible unicorn, Phyl is attacked as she goes to check on Barb, and even the housemother, Mrs. Mac, is not safe. She is killed by a swinging crane hook as she follows the sound of her lost cat’s cries in the attic. As the investigation continues, more prank calls are made by Billy, who keeps mentioning Agnes and some sort of accident. Jess catches something else the psycho says, a quote almost word for word that Peter had said during their argument. This points her and the police toward the angry Peter as the killer. When the calls are traced and found to be coming from inside the house, Jess tries to get her friends out, only to stumble upon their naked, intertwined, dead bodies in Barb’s room. Billy attacks and chases Jess into the basement, where she grabs a fireplace poker and hides. When a frightened Peter breaks a basement window to get to his screaming, pregnant girlfriend, Jess blindly kills him with the poker. The police arrive and they assume she’s killed the murderer. As she lies in bed, sedated, the cops discuss the case, saying Clare’s body had still not been found, implying that the attic has not been searched. They also mention that the killer must have made a prank call after every murder. The camera pans through the house, first looking at Jess in her bed, to Barb’s stripped and bloody mattress, to Clare’s room with her packed suitcase, to the attic where a gibbering voice says, “Agnes, it’s me, Billy.” As the credit roll, the house phone rings, implying that Billy has murdered Jess and is now making his next prank call. 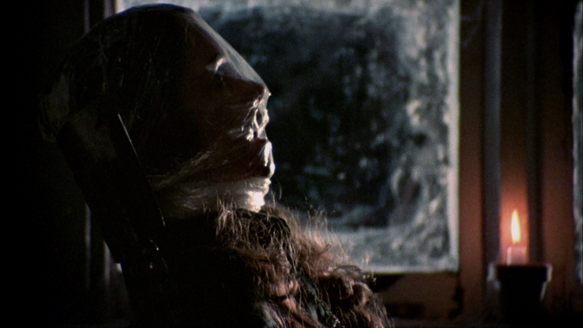 Although Black Christmas was barely a box office success and got mostly negative critical reception when originally released, the film went on to have quite a large cult following in horror circles, currently with a Rotten Tomato rating of 63% fresh. One of the most demented things about this film is the voice (or voices) of the killer over the phone. The screeches, laughter, stuttering and profanity that this guy spews would freak out anyone, college girl or otherwise. The crowd of unsmiling pre-teen carolers was unintentionally disturbing. The humor is dark and dirty, with jabs at townie girls and cops with limited sexual vocabularies. Black Christmas was nominated for the “Best Horror Film” in 1976 by the Academy of Science Fiction, Fantasy & Horror Films and both Margot Kidder and sound editor Kenneth Heeley-Ray (Porky’s 1982, A Christmas Story 1983) won Canadian Film Awards for the film in 1974 – Kidder won “Best Performance by a Lead Actress” and Heeley-Ray for “Best Sound Editing in a Feature.” Screenwriter Roy Moore was nominated for an Edgar Allen Poe Award for “Best Motion Picture” in 1976. A remake directed by Glen Morgan (Final Destination 2000, Willard 2003) was released in the US on Christmas day in 2006 just weeks after the Collector’s Edition DVD of the original was distributed. Ranked 87 on Bravo’s Scariest Movie Moments (2004), Black Christmas has become a staple in a horror lover’s repertoire. 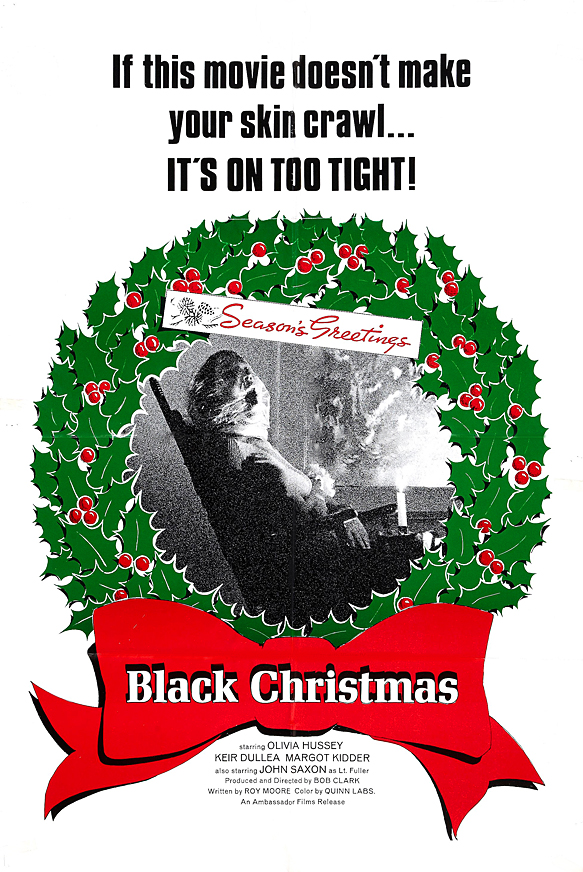