This week in horrow movie history back on Janurary 28th in 1981 Blood Beach made its theatrical debut in the USA. The film was co-written and directed by Jeffrey Bloom (Nightmares 1983, Flowers in the Attic 1987, both of which he also wrote and directed) while Steven Nalevansky (Prime Suspect 1982, Prisoner of Honor 1991) acted as both a co-writer and producer. Filmed on Santa Monica Beach in southern California, this creature feature highlights music by Gil Melle (The Andromeda Strain 1971, The Sentinel 1977) and special effects by Danny Cangemi (Seven 1997, Pirates of the Caribbean: Curse of the Black Pearl 2003). Blood Beach stars David Huffman (F.I.S.T. 1978, The Onion Field 1979), Marianna Hill (High Planes Drifter 1973, The Godfather: Part II 1974), Burt Young (Rocky 1974, Amityville II: The Possession 1982), Otis Young (The Outcasts TV series 1968-1969, The Last Detail 1973), Stefan Gierasch (High Plains Drifter 1973, Carrie 1976)  and John Saxon (Black Christmas 1974, A Nightmare on Elm Street 1984). Bloom used a lot of the tropes that were featured in the successful Blockbuster killer shark movie, Jaws, from the heavy, bassline music used to announce the monster’s presence, to the tagline: “Just when you thought it was safe to go back in the water… you can’t get to it!” 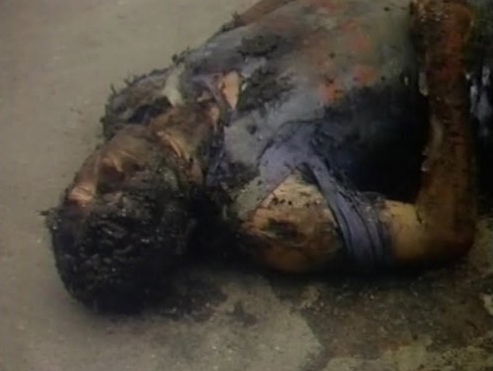 Harry Caulder (Huffman) is swimming to his job as a Venice Beach harbor patrolman when he hears neighbor and friend, Ruth (Harriet Medin), screaming from the beach as she gets sucked into the sand. Upon investigation, only her fluffy dog, Piper, and a strange sand divot are found. Ruth’s daughter, Catherine (Hill) arrives from San Francisco, much to the despair of Harry, who had once been engaged to the pretty artist. Piper cannot seem to leave the beach alone, and that night, she escapes from Catherine’s care and digs in the sand where his mistress had disappeared. When the stressed young woman stumbles upon her mother’s pet, the head is missing. The Chicago loving Det. Royco (B. Young), Sidney Poitier-looking Lt. Piantadosi (O. Young) and sarcastic Capt. Pearson (Saxon) are on the case, and when they talk to the flighty Dr. Dimitrios (Gierasch), find out the dog was killed by a large man with “long, strong fingers and very sharp fingernails.” As the cops connect the terrors of the beach to the over sixty local missing persons cases, a young girl is attacked and mangled after her friends bury her in the hazardous sand. Chomping his cigar and blaming the Nazis, Royco supervises the bulldozing of the beach with Piantadosi, but they find nothing. The disappearances on the shore have still not scared anyone away, including naïve teenagers and eccentric Mrs. Selden (Eleanor Zee), a local bag lady. One night, Harry’s co-worker, Hoagy (Darrell Fetty), kisses his girl goodbye as she rides off on her bike, only to be attacked by a rapist. As the maniac crawls toward her, something grabs his member and yanks it clean off, only to disappear into the sandy depths. 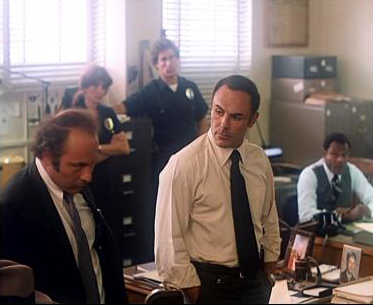 When Harry’s stewardess girlfriend, Marie (Lena Pousette), comes home after her flight, she follows her windblown hat onto the beach and also gets sucked into the sand, leaving another sand divot. Feeling stood up, Harry visits Catherine, and they rekindle their romance. Capt. Pearson spends a lot of time complaining and poking fun at the situation, from the lack of money/help to the loopy Dr. Dimitrios’ outrageous ideas about the sand creature. Now working with the police, Harry takes it upon himself to investigate places he thinks the monster is hiding, and stumbles upon an abandoned, beachside bunker where he says he felt “shaken.” Somewhere down the beach, a CPA using a metal detector is attacked and later crawls, moaning, brain damaged and tongueless, out of a sewer. Things escalate even more when Hoagy tries to convince Mrs. Selden to leave the beach but also gets sucked into the sand, leaving behind the signature sand divot. For reasons unknown, Catherine investigates the bunker, followed closely by Harry and Piantadosi, and Hoagy’s head swings out at her from the ceiling. Screaming, she bumps into another sixteen bodies that all come tumbling down onto her. Pearson decides to set up cameras and explosives in the bunker so they can blow the place to kingdom come at the first sign of the monster. Dimitrios, who wants to know more about this beast and its way of reproducing, asks, “What will happen after we’ve push the plunger and we’ve blown this poor creature to smithereens? What will become of each… smithereen?” As the cops stare into the video screens, waiting for the monster to emerge, a media circus waits on the boardwalk, complete with calliope music. Rising from under the sand, a Tremor-ish creature appears on camera. Its end opens into a huge, Venus flytrap-like mouth and it screams at the intrusion of its lair. Sergeant Royco hits the switch and the bunker explodes as the Dimitrios begs him to wait. Later, the beach is crowded. A little boy disappears, and as his mother calls to him, small, smithereen-sized sand divots appear in all across the beach as the credits roll. 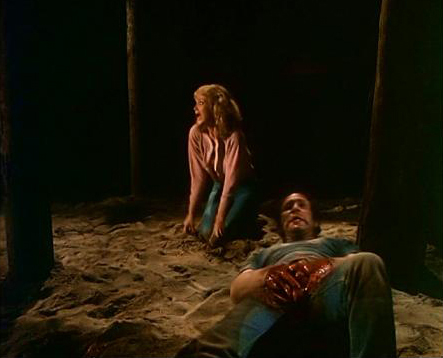 Now considered a cult classic, Blood Beach is full of cheesy goodness, with boom mikes in several shots, a terrible, grainy film quality with a constant flux of scratches, hairs and cigarette burns, bad lighting, and obscure one-liners. Rotten Tomatoes gives Blood Beach a 0% Rotten rating, a feat in itself. Released in the U.S. on VHS by Media Home Entertainment, Blood Beach did not get the DVD treatment until April of 2012, and that was only in Germany. Hardcore ’80s horror buffs have been clamoring for a US release for years, but so far, their requests have fallen upon deaf (or unwilling) years. 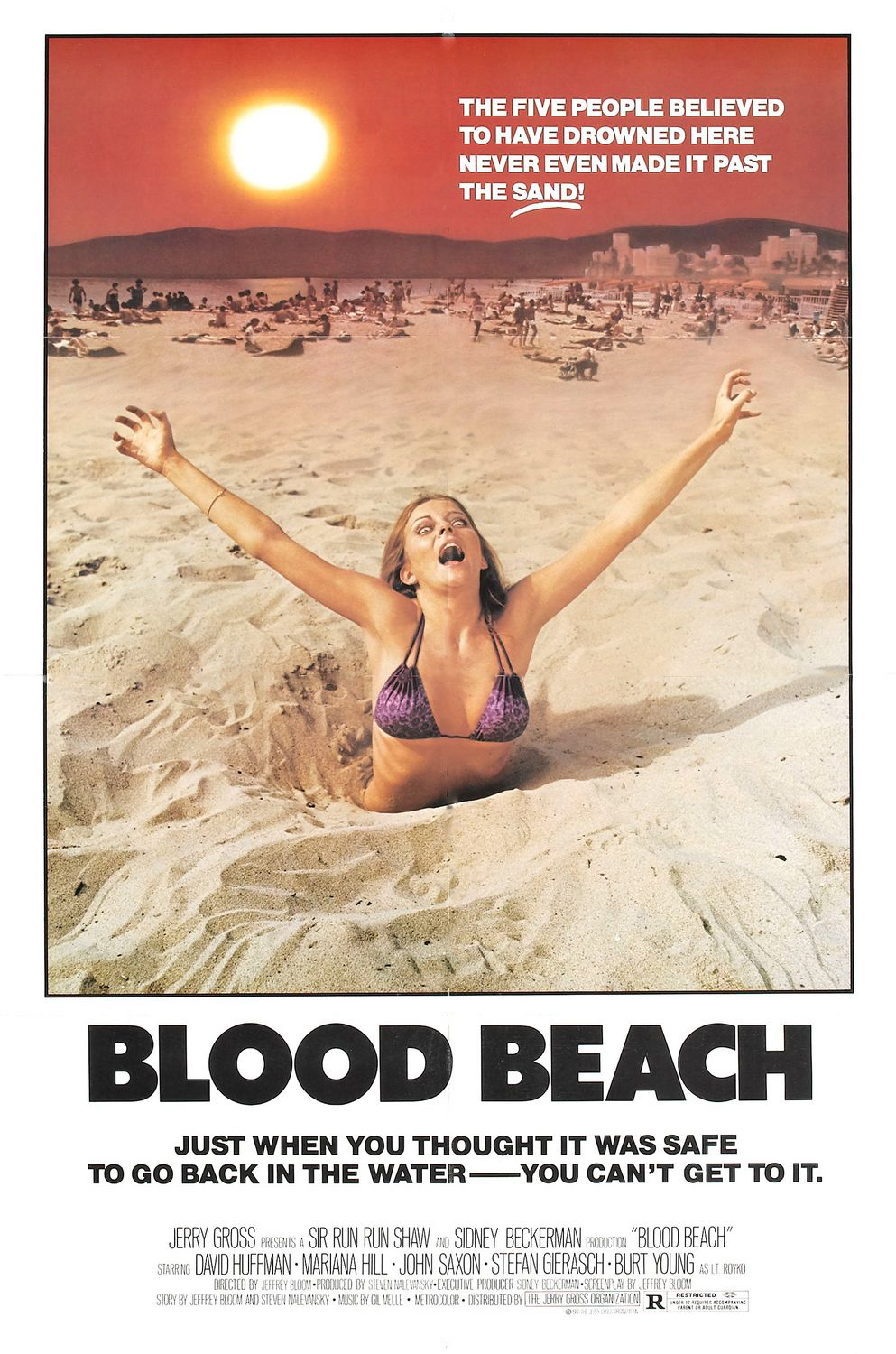