Cannibalistic Humanoid Underground Dwellers. If that does not send a shiver down the spine, what will?  This week in horror movie history, American film C.H.U.D. was released back in 1984. Directed by Douglas Cheek, produced by Andrew Bonime, and starring a few familiar faces including pre-Home Alone (1990) alumni Daniel Stern and John Heard.  There is also a tiny cameo of a police officering John Goodman flirting with a waitress. Before penning any of his Puzzle Lady Mysteries, Parnell Hall wrote the script, although there is some in-house controversy about whether or not he should get the full writing credit. Apparently, Daniel Stern and Christopher Curry rewrote the script and claim that at least 50% of the completed movie was the stuff of their rewrite. They never asked for a writing credit, but they do make quite a bit of a fuss over it on the DVD commentary. The original, limited release by New World Pictures garnered approximately $4.7 million at the box office back in 1984. It was then was re-released by Anchor Bay Entertainment in 2001 and 2008, and again by Image Entertainment in 2011. Rotten Tomatoes gives it an 18% positive review, but do not let this dissuade, the movie did win Best Fantasy Film at Brussels International Festival in 1985, and even got a positive review from The New York Times. C.H.U.D. has gathered a cult following in the horror movie community, on par with Stuart Gordon’s Re-Animator and Warwick Davis in the Leprechaun series. There are C.H.U.D. references spanning quite a few pop culture areas, including music (The Misfits drummer, Dr. CHUD) to movie review website names www.CHUD.com – Cinematic Happenings Under Development. There have been at least four Simpsons’ references to C.H.U.D. You know one has made it in pop culture when Matt Groening takes notice of you.  Nevertheless, let’s get on with the story. 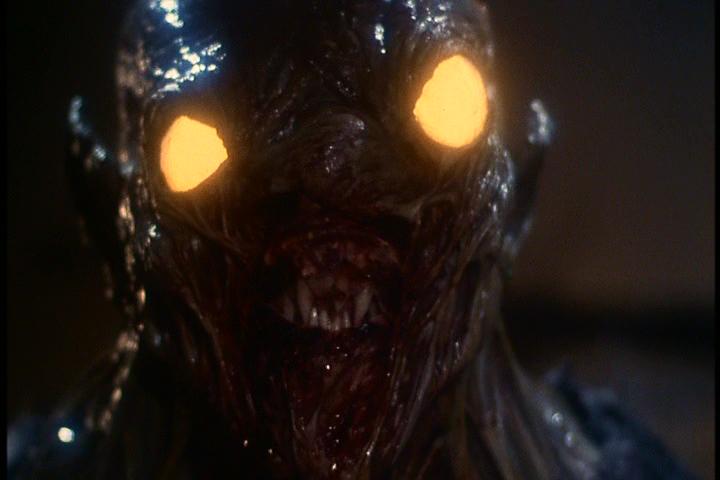 New York City’s homeless are disappearing at an alarming rate. Because they are off the grid, their absence is only noticed by a precious few – people who have made it their mission to make sure the poor and destitute are not forgotten. George Cooper (John Heard) has given up the fame and glamour of high fashion photography to “do something relevant”. He has taken his camera to the sewers to photograph the “undergrounders”, people who make their homes under the city streets. His interest in the missing is peaked when one of his homeless photography subjects brings him to see her brother who has been chomped by something with a pretty big bite radius. There are monsters in the sewers! Enter A.J. “Reverend” Shephard (Daniel Stern), an uncombed, simple-living Good Samaritan who runs the local homeless shelter. The Reverend notices most of his regular shelter patrons have been missing, and he wants some answers. After taking it upon himself to investigate the sewers, he brings his findings (Geiger counters and other radioactivity-checking paraphernalia) to the High Monkey Monks in the Nuclear Regulatory Commission, who disregards his concerns and stop just short of booting his curly-headed ass right out the front door. Not to be too dismissive, the head of the NRC, a weasely Mr. Wilson sends a most effective deterrent after the Reverend. Stopping at a phone booth, the Reverend tries to make a phone call to the press, only to be stopped when the NRC goon eats his quarter. Yes, he actually swallows it. Things seem hopeless for our concerned friends. It all comes to a head when George and the Reverend are trapped underground after finding the NRC’s stash of DNA mutating toxic waste, and Mr. Wilson, everybody’s favorite Government Official, is about to flood the city’s sewers with natural gas, killing humans and non-humans alike. It is up to Captain Bosch, the only member of authority who does not want to smite the entire NYC population below ground level, to save the day, and he does. He gets shot in the back for his trouble, but he does get George and the Reverend out of harm’s way. 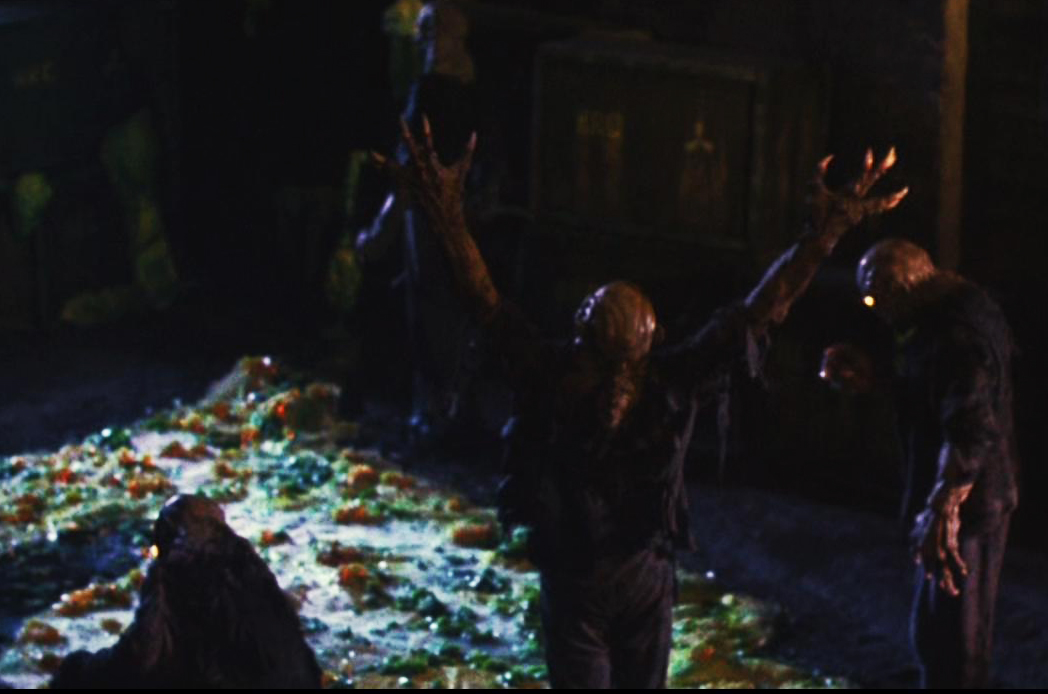 Not what one would call FX driven, C.H.U.D. is actually a pretty clean horror movie. There are no actual creature kills shown on film. Even the attack in the café is only shown post-slaughter. There are a few piles of human guts and body parts littered about, and a cool sword-to-the-neck kill of one of the C.H.U.D.s by George’s girlfriend, Lauren, but nothing showing the C.H.U.D.s getting their bite on. What it lacks in blood and gore, it makes up for in some pretty cool looking monsters. They are not shown often, but when they are, their flashlight eyes and melted, radiated flesh are enough to send you scurrying to the bathroom to check on that clogged drain. The acting is decent, especially that of Daniel Stern. He did a stupendous job playing the out-spoken, moralistic hippie. He gets great support from John Heard and Christopher Curry, who plays Bosch, the guilt-ridden Captain of the Police Department. 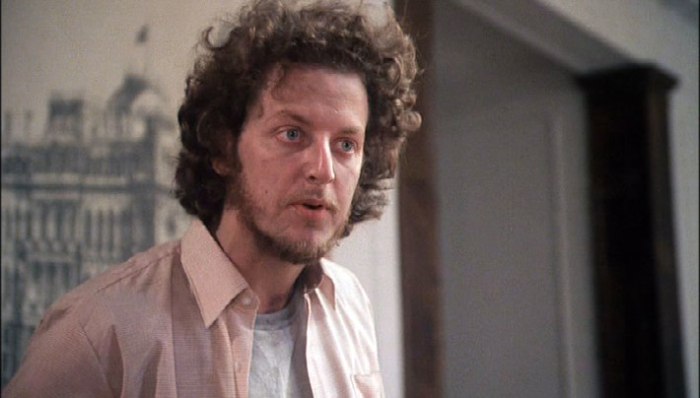 The victims: a few oblivious New Yorkers, a reporter, some flame-throwing NRC guys, a couple of poor puppies and an entire cafe full of unsuspecting diners. Considering that the C.H.U.D. are actually the city’s radiologically mutated homeless, you could count them in on the victims, too. The movie’s Big Bad prize goes to that familiar ‘80s heavy, the United States Government. Their crime? Dumping radioactive and industrial waste under the city streets, causing poor, underground denizens to be mutated into flesh eating monsters via Project Contamination Hazard Urban Disposal. Yeah, I thought that sounded familiar. The government cronies actually had the nerve to attempt a cover up, even after finding out citizens were turning into glowing-eyed flesh eaters. Did people expect anything less? Come on, it was the ‘80s!

A special DVD and Blu-Ray release was announced by The Criterion Collection on April 1, 2011, chock full of special features, extras and new commentary. Alas, it was not to be so as sadly the announcement was actually part of an April Fool’s Day joke by the chumps over at Criterion. 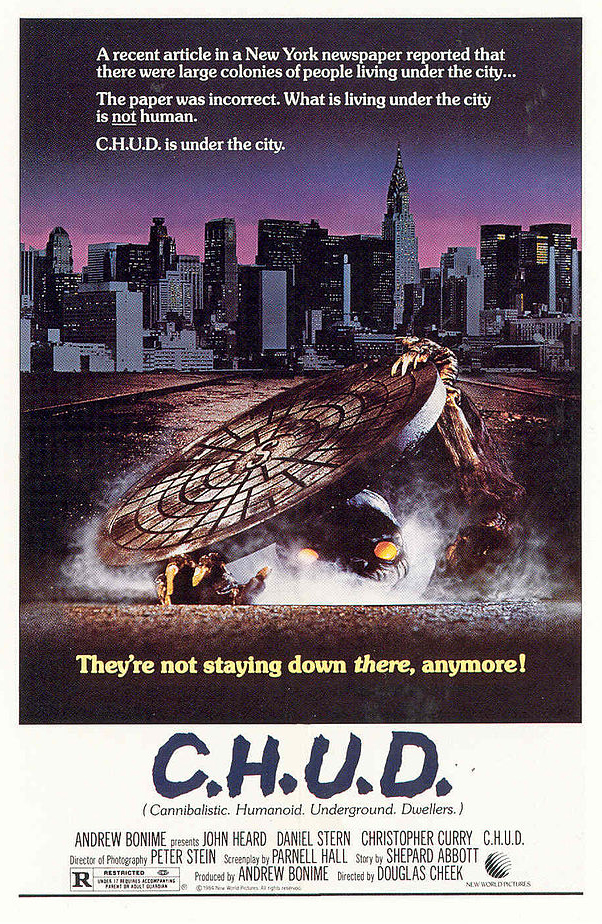 Purchase a copy of C.H.U.D. on DVD on Amazon here