This Week in Horror Movie History – Children of the Corn (1984)

This week in Horror movie history, back on March 9, 1984, Children of the Corn was released in the US with distribution from New World Pictures. Chosen to direct this Stephen King adaption was first time director Fritz Kiersch (Tuff Turf 1985, The Hunt 2006) using a screenplay written by George Goldsmith (Nowhere to Hide 1987, Hot Child in the City 1987). Based on King’s short story from his Night Shift collection, Children of the Corn was produced by Donald P. Borchers (The Beastmaster 1982, Highlander II: The Quickening 1991) with music by first time movie composer Jonathan Elias (Vamp 1986, Parents 1989) and special effects by Wayne Beauchamp (Stargate 1994, Freddy vs. Jason 2003). Starring Linda Hamilton (The Terminator 1984, Beauty and the Beast series), Peter Horton (thirtysomething series, Singles 1992), John Franklin (Child’s Play 1988, The Adams Family 1991) and Courtney Gains (Back to the Future 1985, The ‘Burbs 1989), Children of the Corn was filmed throughout Iowa in September and October of 1983 and was the one and only Gatlin Production. 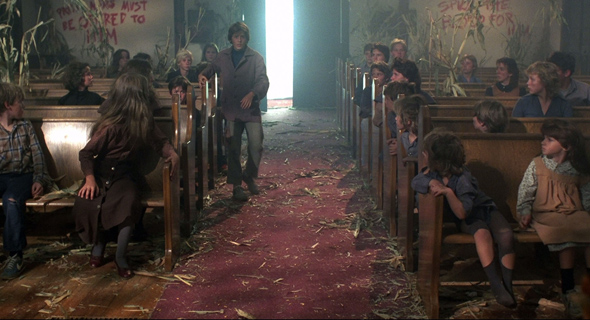 The movie opens on the drought worn town of Gatlin, Nebraska, three years previous. With corn being the lifeblood of many such Midwestern towns, a drought could mean the death of their little burg. Young Job (Robby Kiger) voiceovers about the day the children of Gatlin murdered every adult as a sacrifice to He Who Walks Behind the Rows, a corn god that told the creepy voiced child prophet, Isaac (Franklin), that such an atonement would result in a bumper corn crop. It worked, and in the time since, the children have lived, loved and farmed for the corn and worshipped He Who Walks Behind the Rows. Not all of the children are happy, though. In the present day, Job and his sister, Sarah (Anne Marie McEvoy), sneak away to play forbidden board games while Joseph (Jonas Marlowe) decides to run away through the corn. The omniscient He Who Walks Behind the Rows does not abide deserters and sends the knife wielding Malachai (Gains) to stop him. Along the fieldside highway, the newly minted Dr. Burt Stanton (Horton) and his girlfriend, Vicky Baxter (Hamilton), are on their way cross country to Seattle to Burt’s new medical internship, with Stephen King’s Night Shift riding the dashboard.

Lulled by the miles and miles of cornfields, the two panic as they run over Joseph when he stumbles out into the road. They think the boy’s death is their fault until Burt notices that Joseph’s neck is sliced open. The couple try to find help in Deihl (R.G. Armstrong), the old mechanic at a nearby gas station. Under threat from the children, Deihl is supposed to send passing cars through Gatlin, but he suggests Hemingford, which later gets him killed by Malachai. The couple end up in Gatlin anyway, finding it deserted, along with a café crammed with dried out corn stalks and evidence of a strange corn/Jesus religion. Some Amish-looking children quietly investigate the couple’s car but are seen by Burt, who gives a fruitless chase. Deciding to drive on to Hemingford, Burt sees movement in one of the houses as they leave town. They find Sarah, who tells them about Isaac and his wacked out ideas. As Burt takes off on foot to find help and leaves Vicky with Sarah, Malachai and his farm tool wielding henchmen grab Vicky and bring her to Isaac in the cornfield. The children hang her on a cornstalk cross as a sacrifice to He Who Walks Behind the Rows, across from the skeleton of The Blue Man, the sheriff from the time before the children took over. 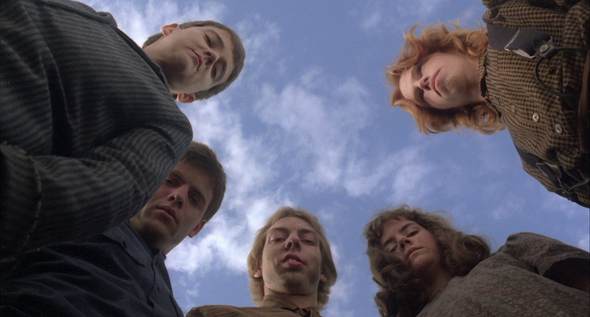 A disgruntled  Malachai is angry about Isaac’s lack of violence in his decisions, and he and Isaac argue. Malachai wins the fight, in effect dethroning Isaac, and he tells his henchmen to replace Vicky with Isaac on the cross. Finally, Burt realizes the town is trouble and goes to look for Vicky. He finds a church full of children and learns that they sacrifice themselves to He Who Walks Behind the Rows on the eve of their nineteenth birthdays. One of the girls stabs him in the shoulder as he escapes. Malachai drags Vicky into the empty street to lure him out, bellowing, “Outlander!” but return to the clearing as the sun sets with just one adult. Up on the cross, Isaac begs for understanding from the corn god. The underground, glowing entity seems to feel no sympathy or loyalty to the tiny preacher and envelopes Isaac as he screams. Hidden in the corn, Burt sees everything and uses the distraction to free Vicky, but first pleads with the children to realize that the corn god is evil. Unresponsive at first, the children panic as a terrible storms whips up and a white haired Isaac appears, possessed by He Who Walks Behind the Rows, and kills Malachai as punishment for sacrificing its favorite prophet. The couple take the remaining children to an old barn to wait out the storm, where Job shows Burt a page from the Bible telling about the Lake of Fire, giving him the idea to burn the fields with the corn made gasohol. With help from Job, Burt connects the flammable gasohol to the water irrigator and lights it up with a homemade Molotov cocktail. He Who Walks Behind the Rows roars and rises into the sky as the corn burns. Burt, Vicky, Job and Sarah leave the rest of the children in the barn next to the burning field and decide to walk to Hemingford. 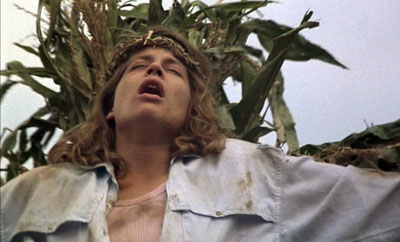 Tagged as “An adult nightmare,” Children of the Corn did not make a strong impression with critics. Roger Ebert said, “By the end of Children of the Corn, the only thing moving behind the rows is the audience, fleeing to the exits,” while Rotten Tomatoes gives the movie a mere 38% rotten rating. There is a decent good vs. evil storyline here, and the movie has found its niche in most Horror fans’ libraries. Ticket sales were decent for the time, with over fourteen million dollars in gross after an eight hundred thousand dollar budget, and the movie spawned seven sequels. There was also a 2009 remake that was directed, produced and written by Donald Borshers, the producer from the original film. Children of the Corn inspired American Thrash Metal band Testament to write “Disciples Of the Watch,” a song about the children of the corn cult but named after the Satanic followers of Damien in The Omen (1976) sequel, The Final Conflict (1981). It is obvious that, once a band writes a song about a movie, that movie is officially a pop culture success. 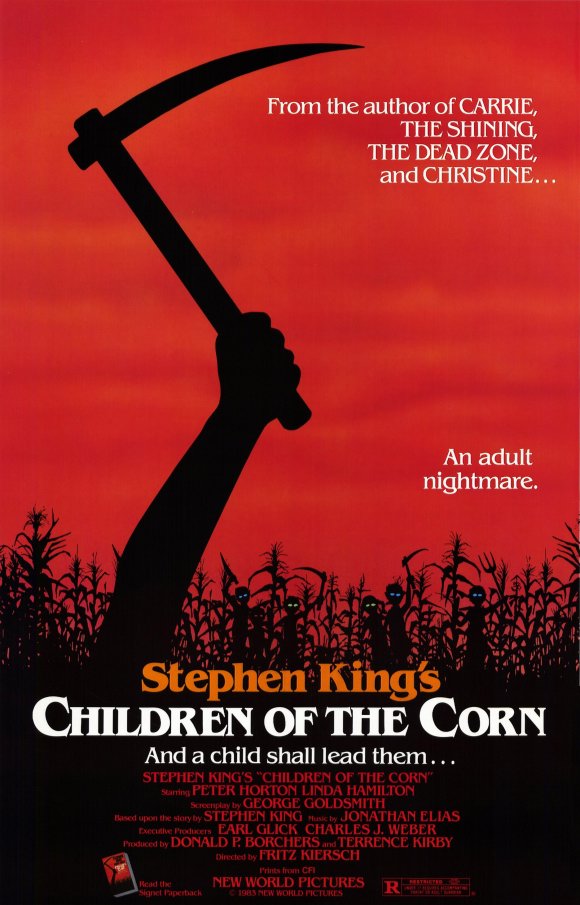 Purchase Children of the Corn on Blu-ray/DVD on Amazon