This week in Horror Movie History, the chilling tale Christine was released on December 9th, 1983. Casting relatively unknown actors Keith Gordon (The Legend of Billie Jean 1985), John Stockwell (Top Gun 1986), Alexandra Paul (Baywatch 1992-97) and Alien’s Harry Dean Stanton in the film version of Stephen King’s novel was a choice Director John Carpenter (Halloween 1979) made early on, passing over better known actors Scott Baio and Brooke Shields to play the main characters, Arnie and Leigh. The movie was actually put into production before the King novel had even been out to print. Given the choice between two unpublished manuscripts, Producer Richard Kobritz (Salem’s Lot 1979) chose Christine over Cujo, finding the dog story too silly. Screenwriter Bill Phillips had to drop a few random ‘F’ bombs into the script to hike the rating up from PG to R, since the movie did not technically have enough violence to justify an R rating and the creators were afraid the movie would not garner enough interest with a mere PG rating. The amazing car regenerating effects were done by Roy Arbogast, who also worked with Carpenter on his 1982 sleeper, The Thing, by filming plastic mock-ups of the car being sucked in by hydraulic pumps and then shown in reverse. Filmed in sunny California, this Columbian Pictures Production grossed a total of twenty-one million dollars at the box office and has a decent rating of 65% fresh from Rotten Tomatoes. 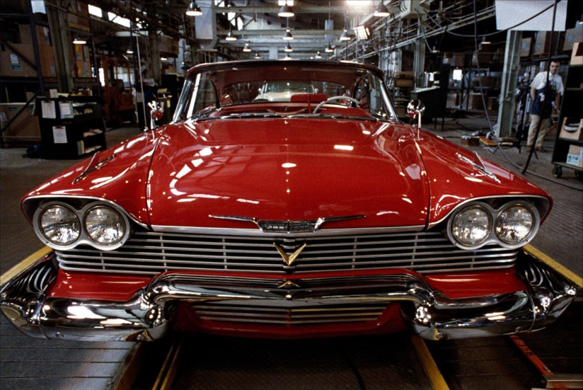 Christine tells the story of a candy apple red ’58 Plymouth Fury, born on the Detroit assembly line and evil from the get go, killing a man before even making it out of the plant. After twenty-one years of murderous mayhem, though, the car was left forgotten and rotting in the junkyard of cantankerous owner Roland LeBay. When milquetoast teenager Arnie Cunningham (Gordon) spots her, he sees something in her rusted out exterior that he can relate to and buys the car, nicknamed “Christine,” despite his one friend, Dennis Guilder’s (Stockwell) objections. He buys Christine from Roland’s brother without finding out the history of the old girl first. It seems that mean, crazy Roland loved his red beauty obsessively and even chose to take his own life while choking on his beloved’s exhaust fumes. As bullied, awkward Arnie lovingly restores Christine to her original 1958 glory at Darnell’s garage, his own attitude and appearance metamorphosize. Suddenly, Arnie is angry, cocky and arrogant, and his horn-rimmed glasses and button down shirts are traded in for a ’50s pompadour and greaser gear. A confrontation in Shop class leaves Buddy Repperton (William Ostrander), Arnie’s number one bully, suspended and on the warpath. Along with his dimbulb friends, Repperton trashes Arnie’s beloved car. Drawing on the strength of Arnie’s obsession, Christine regenerates on her own, and in the cover of darkness, she hunts down and kills the moronic tormenters one by one as Arnie sleeps in his own bed. 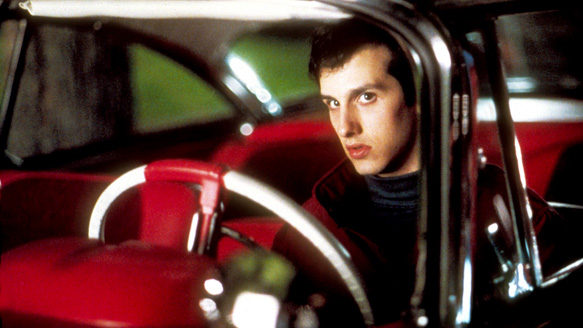 Driving his own Plymouth Fury, Detective Rudy Junkins (Stanton) tracks down Arnie to ask him a few questions about the teens’ deaths, but Arnie haughtily laughs him off. The reformed geek attracts the attention of crush-worthy Leigh Cabot (Paul), who falls for this “new and improved” Arnie. But it isn’t until he returns Leigh’s affections that we learn something new about Christine – she’s a jealous girl, and she’s not about to let some cute chick horn in on her territory. When Christine locks Leigh in and causes her to choke on a hamburger, a freaked out Leigh decides she’s not interested in being a third wheel (no pun intended) in the Arnie/Christine lovefest and breaks the relationship off. Around the same time, Dennis realizes that his old friend Arnie has not only changed his attitude and clothing style, but he’s also acting uncannily like the car’s previous owner, Roland LeBay. Dennis makes the supernatural connection, and together with Leigh, decides to take Christine out. He scratches a message in her hood paint – “Darnell’s tonight,” an act that seems like the signing of his own death warrant. The two teens wait for the car inside the cab of a bulldozer inside Darnell’s garage. As the sun begins to set, Dennis has Leigh hop out of the safety of the dozer cab to wait inside the office so she can shut the garage door and trap Christine once she enters. They’re both shocked to see headlights appear from beneath a pile a garbage. It seems as though Christine was one step ahead of them the whole time. Christine smashes into the office wall in an attempt to kill Leigh, sending Arnie through the windshield and chest first into a huge shard of broken office window glass. As he dies, he smiles at his beautiful car one last time and lovingly pets her. Now, of course, Christine is really pissed, so she attacks Dennis and Leigh with renewed vigor. Dennis uses the bulldozer to smash away at the sentient vehicle, only for her to regenerate any damage he manages to inflict. Her grill like gnashing chromed teeth, Christine charges again and again at the bulldozer, only to finally succumb to the heavy wheels of the construction vehicle. As her engine gutters out and dies, Christine’s headlights blink out for the last time. Dennis, Leigh and Detective Junkins send her through the car crusher, where she drops out onto the dusty junkyard ground as a harmless metal cube. But as the teens and cop turn away, inside the cube, the radio flickers on and metal begins to straighten back out. 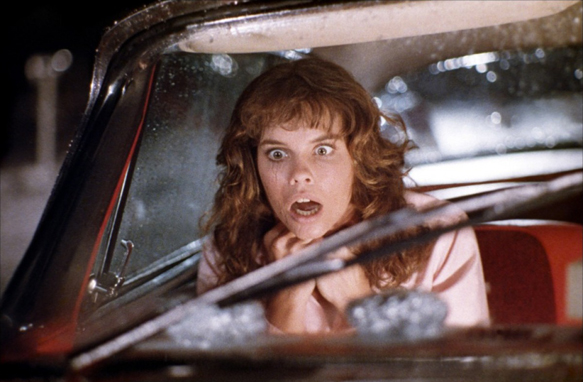 Given three out of four stars by Roger Ebert, Christine is a well-loved classic in the Horror crowd. Who has not wanted their own pet car who not only made them cool but also took out everyone who had ever picked on them? With an awesome soundtrack that includes songs from George Thorogood, The Rolling Stones, Little Richard, Ritchie Valens and Buddy Holly, Christine has gone down in history as one of the coolest, evilest car movies ever to lay rubber on the silver screen. 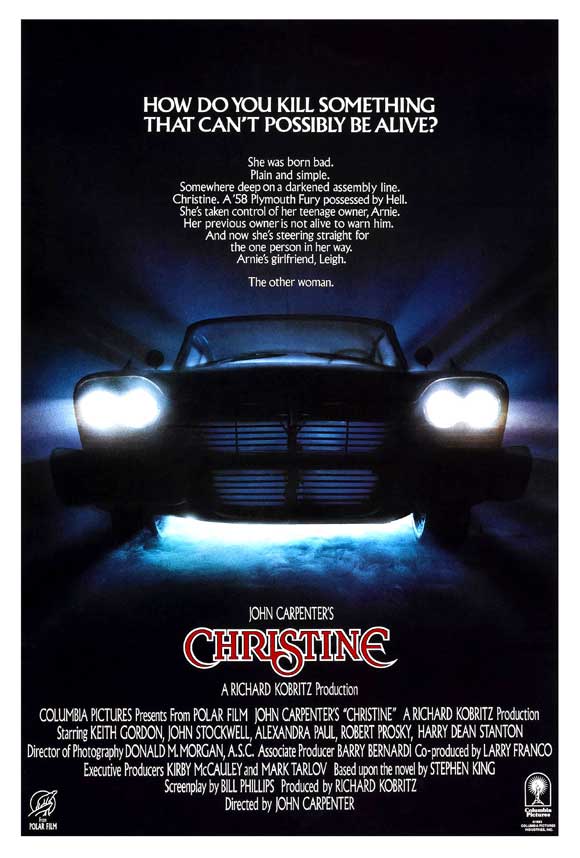 Purchase Christine on DVD on Amazon