This week in Horror Movie History, on November 12th, 1982, Creepshow was released in theaters worldwide. Coming from the combined minds of writer Stephen King and Director George A. Romero, this anthology delighted comic books fans everywhere. Both King and Romero grew up in the times of EC Comics, most notably Tales from the Crypt, and both acknowledge the influence these ten cent magazines had on their own personal, horror-soaked journeys. Creepshow is their tribute those poetic justice-filled pages. 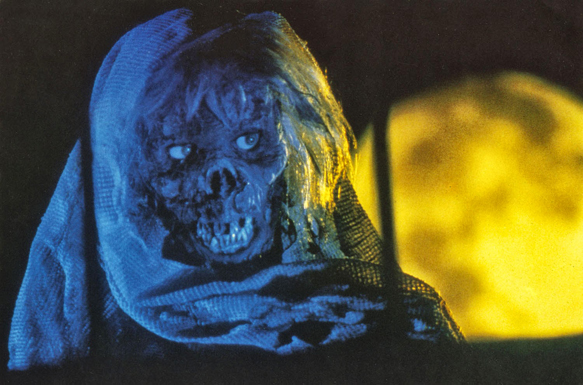 Directed by Romero and produced by Salah Hassanein, Creepshow starred many a familiar face, including Leslie Nielson, Hal Holbrook, Tom Atkins, Adrienne Barbeau, Ted Danson, Ed Harris and EG Marshall. Not only did King write the screenplay, but he also starred in the second vignette as the hapless Jordy Verrill, and his own son, Joe, was cast as Billy for the wrap-around story. Tom Savini was engaged for makeup and FX for this humorously macabre mix-up, while also being tagged to play one of the garbagemen at the end of the film. It was filmed in Pennsylvania, with the outside party scene from “The Crate” being shot in Romero’s actual backyard in Shadyside, PA.  It grossed over $21 million, making it the highest earning horror movie from Warner Bros in 1982.

The wrap-around story concerns young Billy (Joe King), whose cruel dad (Atkins) has taken away his comic books, calling them “crap” and tossing them in the garbage. Although his books are gone, a cursing Billy looks out his bedroom window and sees that the fearsome Creep has returned to tell his tales. Outside, the wind blows the pages of the comic, revealing each story.

The first parable, “Father’s Day,” opens with the wealthy Grantham family waiting for “dotty old Aunt Bedelia” (Viveca Lindfors) to show up for her yearly pilgrimage to the scene of her crime, the house where she had killed her own father, Nathan Grantham, on Father’s Day seven years previously. For the rest of the Granthams, the anniversary is just an excuse to celebrate Bedelia for making them rich, but for the guilt-ridden old lady, Father’s Day is a reminder of the time she finally quieted her miserly, cruel, paranoid ninety five year-old sire. When she accidentally pours whiskey on his grave, Nathan (John Amplas) reanimates (a la Finnegan’s Wake), and promptly kills Delia, all the while asking for his Father’s Day cake. One by one, the members of the family are killed off by the old man. Brother and sister Cassie (Elizabeth Regan) and Richard (Warner Shook) follow some muddy footprints into the kitchen, where they find the rotting zombie holding a platter piled high with the severed head of his granddaughter, Sylvia (Carrie Nye), decorated with frosting and a ring of candles. He shouts, “It’s Father’s Day and I got my cake!” as the candles burn merrily on top of Sylvia’s head. 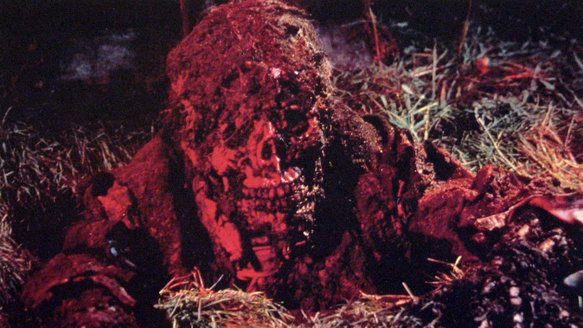 The second story, “The Lonesome Death of Jordy Verrill,” was based on King’s own short story, “Weeds.” Local yokel Jordy Verrill (King) witnesses a meteorite crash behind his farmhouse gas station. He cooks up a plot to sell it to the Dept. of Meteors for $200, but the space rock is too hot to touch, so he pours water on it. The sudden temperature change causes the meteoroid to split and green ooze to spill out. Calling himself a lunkhead for breaking his cashfall, Jordy lugs it inside, but later freaks when he sees his fingertips have started growing a fuzzy, green fungus from where he touched the rock. This cosmic mold spreads quickly, both over Jordy’s body and his home. Jordy can’t stand the crawling itch, and he hops into the bathtub, but this only accelerates the green growth. As the sun comes up, Jordy is only a blanket of creeping space grass. As he ends his life with a nearby shotgun, the radio announces rain coming, a sure sign that the celestial affliction will advance.

In “Something to Tide You Over,” rich, psychotic Richard (Nielson) wants revenge for his wife’s infidelity, so he buries her (Gaylan Ross) and her lover, Harry (Danson) up to their necks in the sand while the tide is out. Richard sets up video equipment to capture every torturous detail as the tide comes in, relishing their slow, chocking deaths as he sits in his comfortable beach house. Later, the sound of squelching footsteps alarms Richard to the seaweed and water-logged revenants that used to be his wife and her paramour. Suddenly Richard himself is buried up to his neck in the sand, sputtering as the waves lap against his face, screaming, “I can hold my breath for a long time!”

One of the longer vignettes, “The Crate,” was also based on another of King’s short stories. When Mike (Don Keefer) the janitor discovers a 150 year old Alaskan crate under the stairs at the local college, he calls his buddy, Professor Dexter Stanley (Fritz Weaver), who leaves his friend, Henry Northrup (Holbrook) and his loud, berating wife Wilma “Call Me Billy!” Northrup (Barbeau) at a faculty party to investigate. To their horror, prying open the crate reveals a blood-thirsty Yeti, who proceeds to eat poor Mike. After watching it chew its way through grad student Charlie (Robert Harper), the Professor later visits Henry at his home to confess. Seeing an opportunity like no other, the normally milquetoast Henry drugs his friend and heads over to the campus. He finds the bloody mess, but cleans it up as Wilma arrives home and finds a note, asking her to help him with a scandal involving Dexter at the school. She arrives, and he tricks her into going under the stairs, where the monster eats her, head to tail. Henry chains the crate back up and dumps it in a lake, but as he’s confessing his own story to the now awake Dexter, the underwater crate bursts open, releasing the still hungry Yeti. 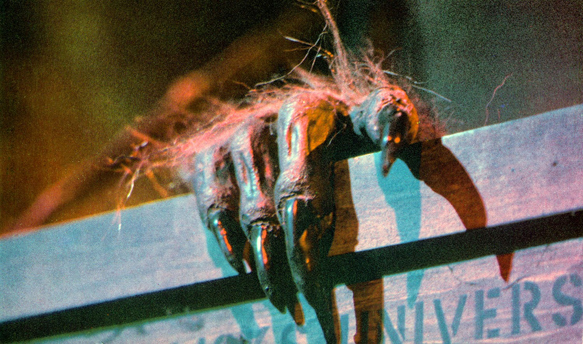 The last story, “They’re Creeping Up On You!” introduces us to mysophobe and entomophobe Upson Pratt (EG Marshall), a cruel, ruthless old man who runs his million dollar business from his stark, hermetically sealed apartment. He badgers and ridicules employees, building supers and colleague widows alike. He starts seeing dirty cockroaches and panics when the lights go out and he cannot see where the bugs are coming from. Locking himself in his panic room, Pratt thinks he’s outsmarted the bugs, only to find that they are already in there with him. He drops dead of a heart attack, and as the scene closes out, cockroaches burst from his body and fill the glassed in room.

The movie ends with garbagemen finding the Creepshow comic on the side of the road and noticing that the Voodoo doll ad is cut out of it. Back in Billy’s house, his grumpy dad is complaining about a stiff neck, but little does he know that his pain is being caused by his vengeful son and his newly acquired Haitian prize.

Bravo puts Creepshow on the 99th spot on their “The 100 Scariest Movie Moments,” mostly for the scene of cockroaches bursting from Upson Pratt’s body. Roger Ebert, who gave the film three out of four stars, says, “Romero and King have approached this movie with humor and affection, as well as with an appreciation of the macabre.” A web series based called Creepshow: RAW was produced by Taurus Entertainment, with a pilot directed by Wilmer Valderrama and featuring Michael Madsen, wrapping July 30, 2008. Certainly a cult classic, Creepshow reminds Horror fans that the good guys do not always win, but the bad guys always get what they deserve. 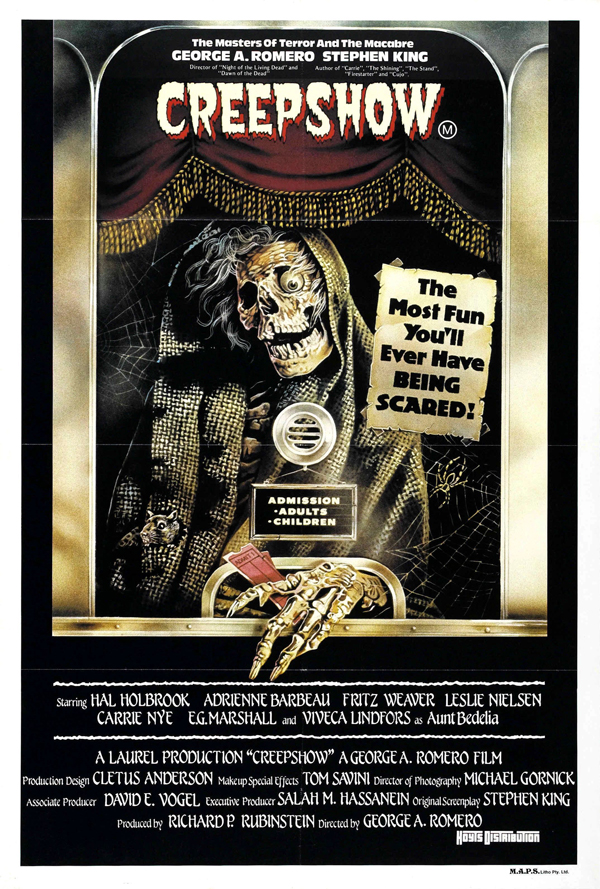 Purchase Creepshow on Blu-ray/DVD on Amazon

Untitled Horror Movie (Movie Review) Creepshow (Season 2 Review)
Like the in-depth, diverse coverage of Cryptic Rock? Help us in support to keep the magazine going strong for years to come with a small donation.