This week in Horror movie history, Damien: The Omen II was released on June 9, 1978 through Twentieth Century Fox. The director of The Omen (1976), Richard Donner (The Goonies 1985, Lethal Weapon 1987), was busy with Superman (1978), so Don Taylor (Escape from the Planet of the Apes 1971, The Island of Dr. Moreau 1977) was brought in to direct. Mike Hodges (Get Carter 1971, Flash Gordon 1981) and Stanley Mann (Firestarter 1984, Conan the Destroyer 1984) wrote the screenplay based on characters created by David Seltzer (Prophecy 1979, Lucas 1986). The film was backed by The Omen producers, Harvey Bernhard (The Goonies 1985, The Lost Boys 1987) and Mace Neufeld (The Funhouse 1981, Hunt for Red October 1990), with music composed by Oscar winner Jerry Goldsmith (The Omen 1976, Poltergeist 1982) and special effects perfected by Academy Award nominated Ira Anderson, Jr. (The Abbott and Costello Show TV series, Route 66 TV series). The movie was filmed in Chicago, Israel, in several academies in Wisconsin, and at Twentieth Century Fox Studios in Los Angeles.

Starring William Holden (Bridge on the River Kwai 1957, The Wild Bunch 1969), Academy Award winner Lee Grant (Shampoo 1975, Village of the Damned 1976) and Jonathan Scott-Taylor (Julius Caesar TV series, Triangle TV series), Damien: The Omen II was Meshach Taylor’s (Designing Women TV series, Mannequin 1987) film debut and Lucas Donat’s only role as Damien’s cousin, Mark. Horror icon Lance Henriksen had a small role as Sgt. Neff, while Leo McKern was the only actor to reprise a role from the first film as the archeologist Carl Bugenhagen. Most of the children were real students at the Lake Geneva school used for Davidson Military Academy, and locals were used for the skating scene on Catfish Lake in Eagle River, both of which were in Wisconsin. Veteran actor Lew Ayres insisted on performing most of the stunts of his character’s watery death, right up to the point when he disappeared below the ice, despite being sixty-nine years old at the time. 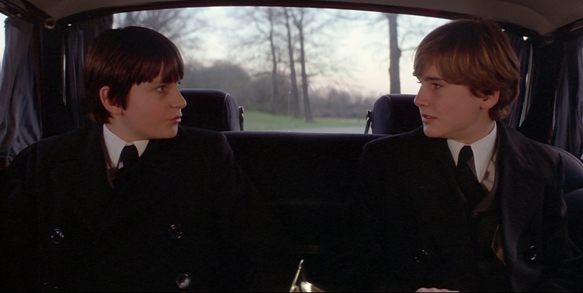 The movie starts with Carl Bugenhagen (McKern) learning of Damien’s survival and convincing his associate, Michael Morgan (Ian Hendry), that the depiction of Damien’s face on Israel’s Yigael’s Wall prove that he is the Antichrist. Once Morgan believes, both he and Bugenhagen are buried alive as the tunnel collapses on them. Back in the US, the now twelve-year-old Damien (Scott-Taylor) is living with his uncle, Richard Thorn (Holden), Richard’s second wife, Ann (Grant), and Richard’s son, Mark (Donat), also twelve. The boys are preparing to go back to Davidson’s Military Academy when Richard’s elderly, visiting Aunt Marion admits she sees Damien as a threat to Mark and threatens to cut Richard out of her will if he does not separate the boys. He dismisses her. That night, a visiting raven precludes her death of a heart attack. Journalist Joan Hart (Elizabeth Shephard) also tries to warn Richard about Damien after seeing his face on Yigael’s Wall, but she, too, is turned away. Later, after her car’s engine mysteriously dies, Joan is attacked by a raven as it pecks out her eyes and then watches her get run over by a passing truck. At Thorn Industries, senior manager Bill Atheron (Ayres) balks at manager Paul Buher’s (Robert Foxworth) heartless business plans. Bill then dies when he falls through the ice at Mark’s birthday party, just as the Satanist Buher introduces himself to Damien. Unable to handle Atherton’s death, Richard goes on vacation, leaving Buher free to implement his immoral business ideas.

At the academy, Damien’s new commander, Sgt. Neff (Henriksen), points Damien to the Book of Revelations in the Bible and explains that all will be revealed to him once he reads Chapter Thirteen. The mention of 666, the Mark of the Beast, sends Damien to the bathroom mirror, where he finds the mark in his hairline. This causes Damien to flee the grounds in a tear-filled, terrified panic. At Thorn Industries, Dr. Pasarian (Allan Arbus) admits to Buher that he will tell Richard that Buher’s business decisions led to the murder of innocents. He is killed by toxic fumes during an industrial accident at the factory during a visit from Damien and his classmates. Damien alone is found to be unharmed by these poisonous gasses, and Dr. Kane (Taylor) investigates, finding that Damien’s red blood cells resemble that of a jackal rather than a human. Before he can report his findings, he is sliced in half by a falling elevator cable.

Among the treasures delivered to the Thorn Museum from the excavation site at Yigael’s Wall, Dr. Warren (Nicholas Pryor) finds Bugenhagen’s box containing a letter explaining the details about Damien’s parentage and the Seven Daggers of Megiddo, the only weapons able to kill the boy. He tells Richard, who is finally starting to believe. Richard shows the letter to Ann, who convinces him that the whole thing is preposterous. Suspicious after overhearing Dr. Warren, Mark confronts Damien, who now proudly admits to being the Devil’s son and asks Mark to join him on his quest to take over the world. Mark’s horrified refusal results in Damien killing his cousin and best friend with an aneurysm in his brain. Shaken by his son’s death and his own growing doubts, Richard hunts Dr. Warren down to a New York City train station where Yigael’s Wall is being stored. Just as Richard sees Damien’s image in the wall, a runaway train car slams into the storage car, crushing the doctor and destroying the wall. Convinced that Damien really is the Antichrist, Richard gets Ann and they collect the boy from his school’s graduation ceremony, bringing him to the museum where the Seven Daggers are waiting. Ann reveals that she has always belonged to the Devil and uses the daggers to kill Richard. Damien hears the altercation and sets the room on fire, consuming Ann, Richard, the daggers, and Bugenhagen’s letter in flames. As the fire department arrives, Damien walks out of the burning museum, a slight smile on his face. 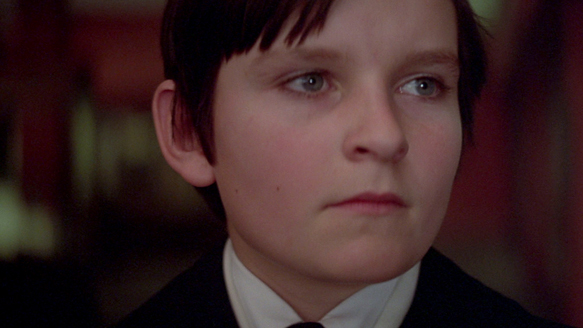 Doubling the budget of the first film, Damien: The Omen II was made for $6.8 million, but earned over $26.5 million, making it a box office success and earning it a cult following, even though it made much less than the first movie. Plans to film a third Omen in 1979 were then cancelled. Omen III: The Final Conflict did come out in 1981, followed by Omen IV: The Awakening ten years later. Although The Omen Quadrilogy was released on DVD in the US and UK in 2000, the films were not available separately until 2005. To coincide with the DVD release of the remake of the original film in 2006, The Omen and its sequels were released individually and together in a Pentalogy boxset digitally remastered and with more bonus features. In 2008, it was released on Blu-ray with both the first and third films in the series. A chilling sequel to one of the world’s oldest terrors, Damien: The Omen II shows that a man’s destiny is not always chosen, especially if one happens to be the son of the Devil himself. 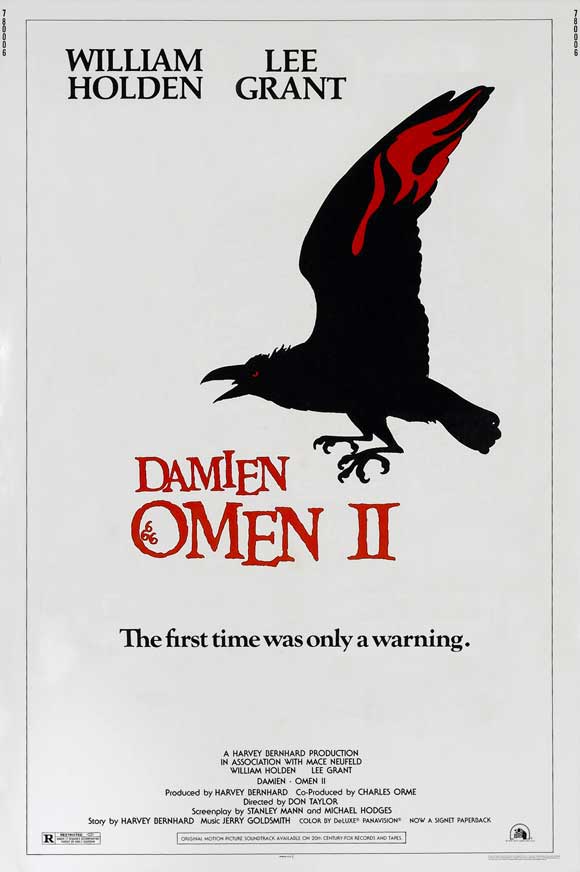