This week in Horror Movie history, back on April 20, 1979, George A. Romero’s classic Dawn of the Dead hit theaters across America. The character of the Zombie in film has been around since 1932’s White Zombie with legendary Bela Lugosi. However, nobody has done more for the character than another legend, Director George A. Romero, with his ’68 classic Night of the Living Dead. The film raised such a controversy because of its violence that the public at large wanted definite acceptability guidelines. Nonetheless, the film became the most profitable Horror film ever. Just under eleven years later, Romero unleashed Dawn of the Dead on the world. In the almost eleven years since the original was released, audiences were much more forgiving, embracing Dawn of the Dead, and making it an easy cult favorite in movie history, as well as making it one of the most beloved of Romero’s Dead franchise. 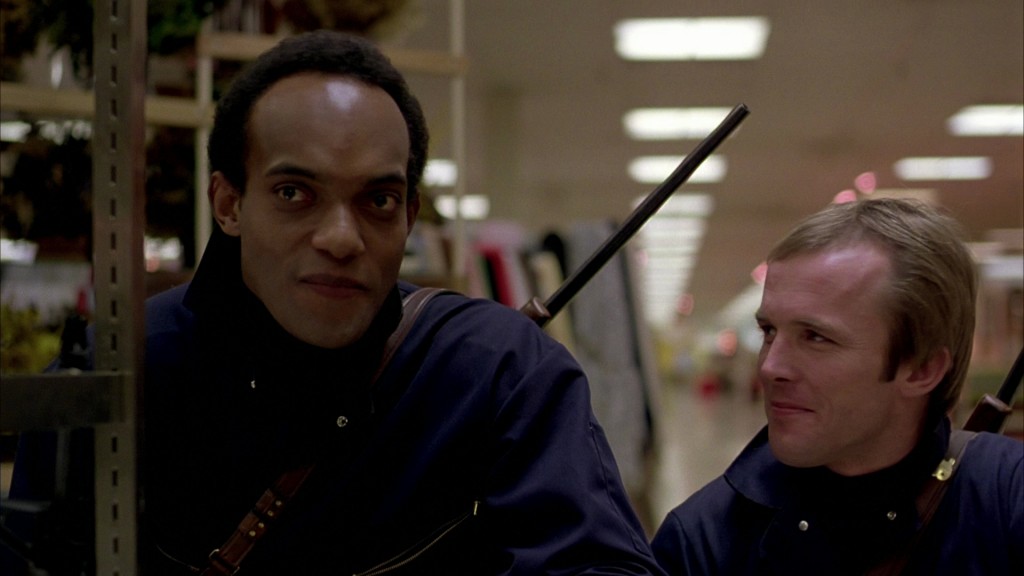 Written and directed by George A. Romero (The Crazies 1973, Creepshow 1982), co-produced by Richard P. Rubinstein (Creepshow 1982, Pet Sematary 1989), Claudio Argento (brother of Director Dario Argento), and Alfredo Cuomo (The Night Flier 1997), Dawn of the Dead also features makeup and special effects guru Tom Savini (Friday the 13th 1980, Texas Chainsaw Massacre 2 1986). A labor of passion, love, and envisionment, the film was made by friends who came together simply for the sake of making an effective Horror movie.

Despite the efforts of the government, the epidemic of the dead reanimating has worsened. When her network is overrun, Francine Parker (Gaylen Ross: Creepshow 1982, Madman 1982) and SWAT defectors Stephen “Flyboy” Andrews (David Emge: Basket Case 2 1990), Peter Washington (Ken Foree: Leatherface: Texas Chainsaw Massacre III 1990, The Devil’s Rejects 2005), and Roger “Trooper” DeMarco (Scott Reiniger: Knightriders 1981, Dawn of the Dead 2004) escape and take refuge in a mall, but they quickly realize they are not alone. Will the foursome escape the mall, or become undead?

Initially debuting in Italy in 1978, Dawn of the Dead was not based on Night of the Living Dead’s receipts. In fact, Romero did not even think of doing another Dead film for another six years when he visited Monroe, Pennsylvania’s Monroeville Mall with a friend. It was the off-comment his friend made about anybody being able to survive in an emergency at that mall that got Romero’s wheels spinning.  However, between Romero and Rubinstein, they could not get financing until Italian director Dario Argento stepped up, at the same time brokering international distribution rights. Then, Romero got permission to shoot in Monroeville Mall, whose owners ponied up financing. Along with the mall, Romero was granted permission to use the local airport while the mall hideout and the elevator as well as shaft were a soundstage at the Latent Image, the production company Romero had. In addition, the gun shop used in the film was on the other side of town. 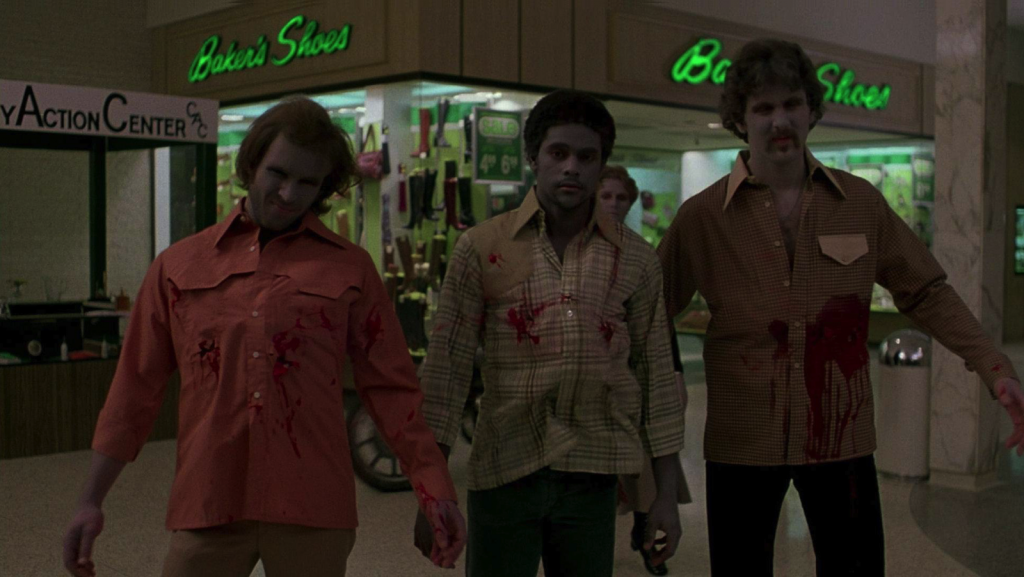 Romero visited Rome, Italy and stamped out the script in three weeks. Excited to get the project into full swing, filming started in November ’77 with the working title Dawn of the Living Dead through February ’78 with a break for the Christmas and New Year holidays, thus making the experience a frigid experience for the cast and crew. In fact, there came points where they were forced to film at night after the mall closed, that they were actually snowed in. Editing was done during the holidays, and after filming wrapped. Interestingly enough, a few different versions were made with different angles to get different responses from test audiences.

Italy first unleashed Dawn of the Dead on September 2, 1978, while New York received the US debut April 20th of 1979, with the West Coast getting the film a little under a month later. Unlike Night of the Living Dead, Dawn of the Dead was received exceptionally well, because of the shocking visuals, garnering an opening $900 thousand on its way to a $55 million worldwide take from a $1.5 million budget set by foreign currency. Dollar-wise, the budget was more like $500 thousand.  This unpredictable success made it the most profitable of the Dead franchise to date.

With the advent of the internet, the website Rotten Tomatoes has Dawn of the Dead with a 92% “Fresh” rating, while the Internet Movie Database has the film with an 8/10 rating.  This due, in no small part, to Savini’s superb makeup and special effects work.  For example, he realized the original Night of the Living Dead was shot in black and white, so he came up with a grayscale to create the dead effect; however, in hindsight, he did not like the blue tinge look that translated from the camera to screen. The blood packets used in the effects were a mixture of food coloring, peanut butter, and cane sugar syrup, while using the same dummy for every kill to save on budget.

Adding to the effect, for the film’s soundtrack, Romero used stock music from the De Wolfe Music Library to save on the budget with specific sequences borrowing the National Guard anthem and the Pretty Things. This move added a quirkiness and black humor to the seriousness of the film. For Argento’s version of Dawn of the Dead, he tapped freelance Italian band Goblin, who is known for their exceptional soundtrack work.  Later, Romero borrowed a few of their pieces for his cut, combining the two for the version of the film most fans prefer today. 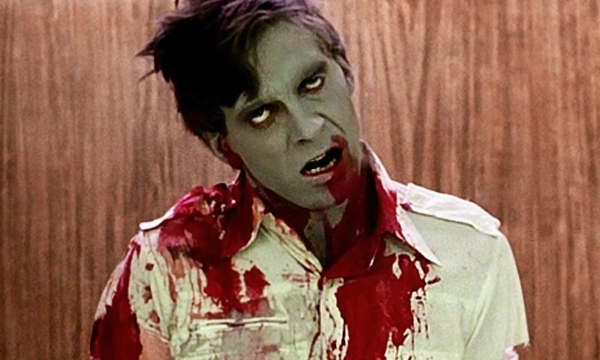 Always topical, and looking to raise awareness, with Night of the Living Dead, Romero explored hysteria, racism, and a veiled commentary of the then-ongoing Vietnam War. Whether intentional or not, Dawn of the Dead continued with the hysteria theme as well as society’s obsession with commercialism and materialism with the dead still trying to get to the mall when Peter says, “They’re after the place. They don’t know why; they just remember. Remember that they want to be in here.” Abortion’s even thrown into the mix with Francine debating on whether to bring a baby into this new world. Whether the characters are believable is up to the viewer since everybody takes trauma on a mass scale differently, but Dawn of the Dead’s group takes it in peaks and valleys depending on avenues of escape and whether everybody is on the same page. Characterization coupled with the on-location shooting gives a realism. On the same note, the blood’s rich red hue helps offset the horror with its fakeness, softening the blow of the gore.

In the three decades since its release, Dawn of the Dead has been referenced multiple times in films that aimed to pay homage, imitate, or spoof it such as 1980’s Maniac, where Savini did the special effects, and used the same machete and the exploding head sequence as Dawn of the Dead, or the 1985 TV series Cheers episode “Love Thy Neighbor,” where Vera refers to Norm like Dawn of the Dead as a lover. Then, there was Dan O’Bannon’s 1985 Return of the Living Dead that spoofs the Dead series. Even video games have referenced Dawn of the Dead throughout the years like the spot on mall in 2003’s Manhunt, and there has not been a Horror documentary made since Dawn of the Dead was made that does not have a segment giving love to the film or its five sequels that includes one coming out October this year, or the ’04 remake. When it is all said and done, Dawn of the Dead, that came from nothing, became the Dead juggernaut that would build an empire that has stood the test of time. 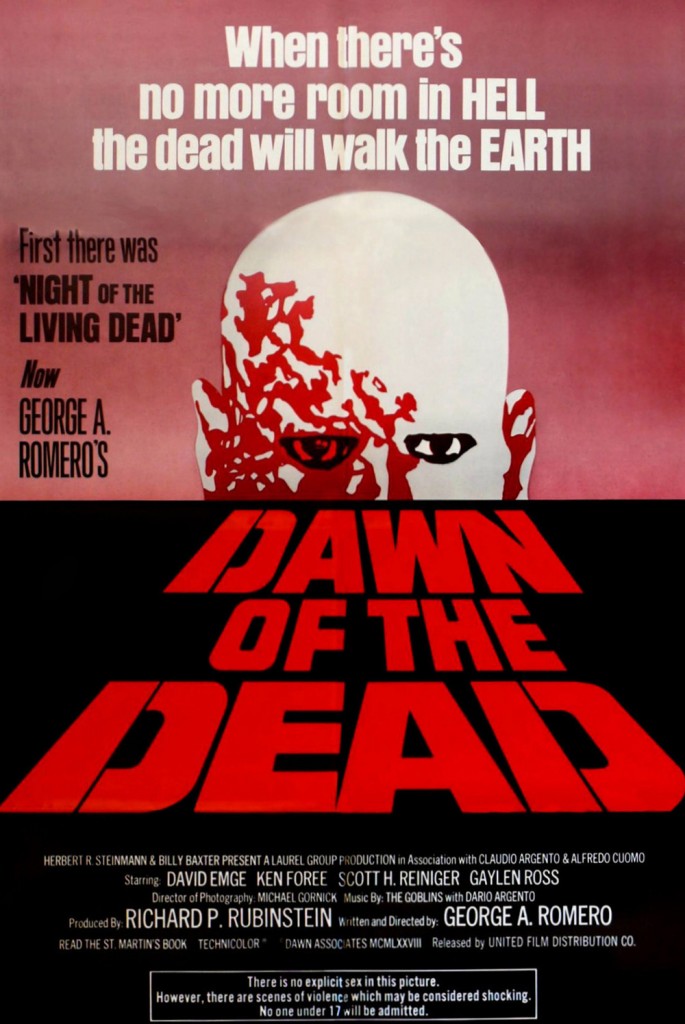 Purchase Dawn of The Dead on DVD on Amazon

Untitled Horror Movie (Movie Review) Curse of the Blind Dead (Movie Review)
Like the in-depth, diverse coverage of Cryptic Rock? Help us in support to keep the magazine going strong for years to come with a small donation.