This week in Horror movie history, back on May 11, 1984, Stephen King’s Firestarter was released in the US by Universal Pictures and Dino De Laurentiis Company, who was also behind King’s adaptions of Cat’s Eye (1985), Silver Bullet (1985), Maximum Overdrive (1986), The Dead Zone (1983) and Sometimes They Come Back (1991). The movie was directed by Mark L. Lester (The Funhouse 1981, Commando 1985) and produced by Frank Capra, Jr. (Escape From the Planet of the Apes 1971, Death Before Dishonor 1987). Stanley Mann (Damien: Omen II 1978, Conan the Destroyer 1984) penned the screenplay based on King’s novel by the same name, while popular score composers Tangerine Dream (Risky Business 1983, Legend 1985) wrote the music, although they admitted to not watching the movie beforehand. Filmed in North Carolina, Firestarter‘s intense special effects were created by Jeff Jarvis (Cat’s Eye 1985, Species 1995) and Michael Wood (Star Wars: Episode VI: Return of the Jedi 1983, Edward Scissorhands 1990), both of whom worked on 1982’s Poltergeist.

The movie stars Drew Barrymore (E.T. the Extra Terrestrial 1982, Scream 1996), David Keith (An Officer and a Gentleman 1982, Heartbreak Hotel 1988), Academy Award winner George C. Scott (Patton 1970, The Changeling 1980), Martin Sheen (Apocalypse Now 1979, The West Wing TV series 1983), and Heather Locklear (Dynasty TV series, Melrose Place TV series), and was the second King adaption for both Barrymore (Cat’s Eye 1985) and Sheen (The Dead Zone 1983). Good Samaritans Irv and Norma Manders were played by Academy Award winners Art Carney and Louise Fletcher. The evil corporation The Shop also appeared in King’s miniseries The Golden Years (1991) as the pursuers of Harlan and Gina Williams. In an interesting twist, John Carpenter had originally been called to direct Firestarter, but was pulled at the last minute by Universal executives after his remake The Thing (1982) bombed at the box office. 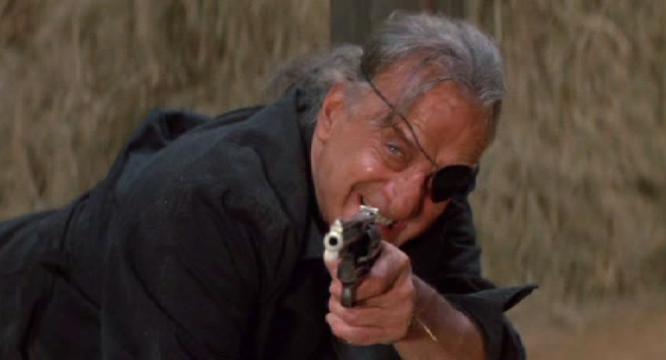 The movie starts out with poor, young college students Andy McGee (Keith) and Vicky Tomlinson (Locklear) participating in a medical experiment to earn some extra cash. Sponsored by the Department of Scientific Intelligence, AKA The Shop, they are given a top secret hallucinogenic called LOT-6 that opens up neural pathways in their brains, giving Andy the power of suggestion and Vicky telepathy. While this effect mostly wears off, both are left with vestiges of supernatural talent. They wind up marrying and having a child, Charlie (Barrymore), now nine years old. The mixture of DNA and LOT-6 from her parents gives Charlie pyrokinesis and short-term precognition. This result interests the scientific minds at The Shop, and they decide that they want Charlie for themselves to train as an extrasensory, fire starting weapon. When Andy comes home to find his wife murdered by agents of the evil corporation, he manages to save Charlie by blinding the kidnappers and going on the run with his daughter. For the following year, the two hide out in secluded cabins and dingy motels while Andy writes letters to newspapers to reveal what The Shop is really up to, but one of the postmarks gives away their location at Irv and Norma Manders’ farm, and one-eyed John Rainbird (Scott) is dispatched to hunt down and capture the father and daughter. After a standoff, the two are captured and brought to a secret facility of The Shop, where employees keep them separated. It becomes clear right away that Andy’s powers are still active but have decreased significantly since his initial exposure to LOT-6, and he is kept sedated to keep him from causing trouble.

Charlie, on the other hand, is literally bursting with psychic energy, but refuses to submit to experiments until she can see her father. Rainbird goes undercover as a friendly janitor to befriend Charlie and convince her to use her abilities. Time and time again, Charlie destroys The Shop’s paltry experiments, barely breaking a sweat, making it obvious that she could destroy the entire facility should she so chose. As her power and requests to see her father increase, Andy starts palming his sedatives and regains his power of suggestibility. He forces Captain Hollister (Sheen) to arrange an escape. Charlie tells her friend the undercover janitor about her father’s plan, and although he promises to help, he also tells the powers that be about the upcoming breakout attempt. When Andy realizes the trick Rainbird has pulled on Charlie, he waits for her to arrive at their arranged meeting place at the facility’s stables and tells her. He uses his power to force Hollister to shoot Rainbird, but not before the one-eyed man kills Hollister and fatally wounds Andy. Young Charlie sends Rainbird up in flames. As he lays dying, Andy tells Charlie to burn the place up and then run. With tears in her eyes, Charlie turns her powers onto the facility, burning it to the ground and killing Shop employees left and right. She finally escapes and stops at the Manders’ farm as she makes her way to New York City to tell her story to the media.

Firestarter is one of King’s better film adaptations, coming in just behind Christine (1983) and Carrie (1976). The Academy of Science Fiction, Fantasy and Horror Films nominated the movie for Best Horror Film, and also nominated Drew Barrymore for Best Performance by a Young Actor, both in 1985. With a budget of fifteen million dollars, the film only grossed seventeen million dollars in theatres, making it a box office success, but just barely. Firestarter only scores a 39% on Rotten Tomatoes, although the soundtrack by Tangerine Dream was given four out of five stars on Allmusic.com. Despite these low numbers, genre fans know a great film when they see one, and Firestarter has burned a hole in every Horror lover’s heart. 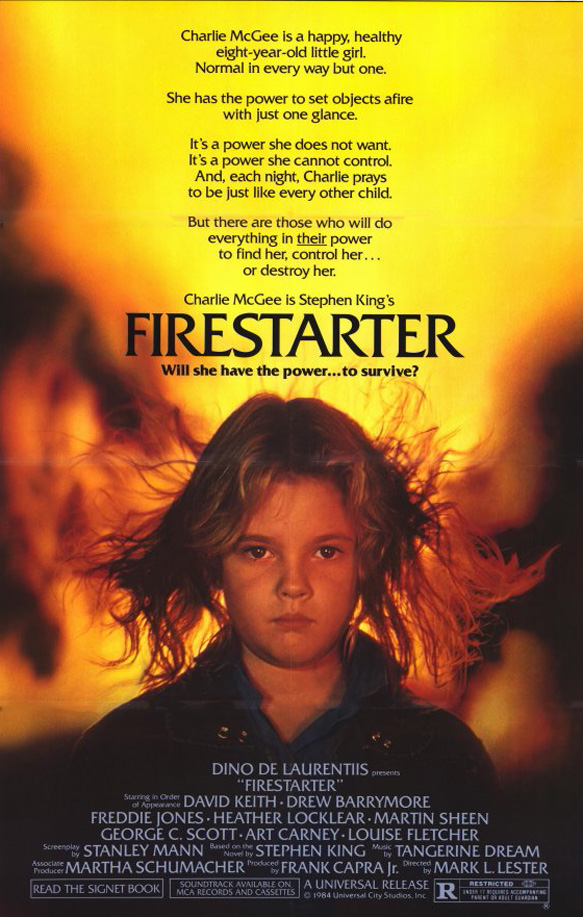 Purchase Firestarter on Blu-ray/DVD on Amazon