The movie begins with a recap of the events from the end of the previous film, then jumping forward to the following night as lakeside store owners Harold (Steve Susskind: Monsters Inc 2001, Osmosis Jones 2001) and Edna (Cheri Maugans: Archie Bunker’s Place TV series, Dallas TV series) are killed by Jason so he can steal less bloody clothes and his infamous mask from their Michael Myers-esque clothesline. He then moves on Higgins Haven, a local farmhouse and the destination of Chris Higgins (Kimmel), who has not been back to the property in two years. As the monster bides his time, Chris shows up with friends: stoners Chuck (David Katims: The Invisible Kid 1988, Grimm TV series) and Chili (Rachel Howard: Emergency TV series, Deep Space 1988), awkward prankster Shelly (Zerner), Shelly’s uninterested blind date Vera (Parks), and pregnant, albeit horny Debbie (Savage), along with her immature boyfriend, Andy (Rodgers), who nearly runs over Abel (David Wiley: Falcon Crest TV series, Night Court TV series), Part III’s version of Crazy Ralph.

They are met at the house by Chris’ old boyfriend, Rick (Kratka), who wants to continue where they left off two years previous, but Chris is not sure yet. Shelly shows just how socially awkward he is by playing I’ve Been Killed By An Axe Wielding Maniac a few too many times, although he makes up for it during a trip to the store with Vera when he runs over the motorcycles owned by the local bullies Fox (Gloria Charles: National Lampoon’s European Vacation 1985, Falcon Crest TV series), Ali (Nick Savage: Fright Night 1985, Harlem Nights 1989) and Loco (Kevin O’Brien: Serial 1980, Warlock 1989), who look like they walked straight onto the set from a Michael Jackson video.

None too pleased, over-the-top Ali punches out their windshield, gets the other thugs to follow the kids back to Higgins’ Haven and siphons all of the gas out of their cars to use to burn the barn down. Fox disappears into the barn and when Loco follows, he finds her pinned to the wall with a pitchfork to the neck, thanks to our buddy Jason. Ali also goes into the barn, but he manages to get a few licks in with a machete before Jason dispatches him. In the meantime, Chris and Rick have taken a walk in the woods, and Chris finally exposits on the reason she and her family had moved away – after a fight with her parents, she had run out into the woods where she had been attacked by a horribly disfigured man. During the struggle, she had passed out and woke up in her bed, making her wonder if she had imagined everything.

Back at the house, Shelly once again scares Vera while she sits on the dock, this time dressing as the actual killer by wearing a hockey mask and carrying a spear gun. Insisting that negative attention is better than none, Shelly storms off, leaving Vera alone. When another hockey mask-wearing guy shows up, Vera assumes Shelly is back, but you know what they say about assuming. It gets you a harpoon to the eye. Inside, Debbie takes a shower while Andy handstands to the kitchen to get beers. Jason is not amused – he slices Andy straight down the middle. Debbie finishes up and lays down on her hammock bed with an issue of Fangoria to wait for Andy. As she flips past an article on Tom Savini (who supervised the FX in the original film), blood drips from the ceiling onto the pages. Just like Jack (Kevin Bacon: The Following TV series, Hollow Man 2000) in Part I, a knife stabs up from under the bed and through her throat. The lights go out, so Chuck goes into the basement to flip the fuse, but gets thrown into the fuse box by Jason, an act that resets the electrical circuit. When Shelly stumbles in with a slashed throat, Chili assumes he is kidding again, but realizes it is real all too soon, just before getting herself skewered by a red hot fireplace poker.

Chris and Rick arrive back at the house and, not realizing that they are the last men standing, split up and look for their friends. When Chris realizes something is very wrong, she calls for Rick, but he cannot answer her since Jason is crushing his head between his massive hands, sending his eyeball shooting out into the faces of all who have 3D glasses. Loco falls out of the hayloft in front of Chris, freaking her out, but she does not really panic until Rick’s body is thrown at her through a picture window. She barricades herself in a bedroom and even yanks the knife out of Debbie’s head to use as defense. A few stab wounds slow Jason down but does not stop him. Chris manages to escape the house and try the van, but the gas tanks are empty (finally, an actual reason why a vehicle cannot deliver a victim to safety), so the car stalls. Chris hightails it to the barn, where, during the final showdown, Jason’s mask slips free, revealing him to be the maniac who had attacked her two years previous. Surprisingly, the still living Ali comes to Chris’ rescue and distracts Jason by standing below his slashing machete as Chris chops him in the head with an axe. Being a movie monster, Jason takes his time dying, but finally succumbs. In another tribute to the first movie, an exhausted Chris climbs into a canoe and drifts out onto the lake, where she hallucinates the intact but now decidedly slimy Mrs. Voorhees bursting out of the water and pulling her under. When the cops finally arrive and take the shaken Chris to safety, the camera pans over the still form of Jason and the once again calm Crystal Lake.

Although Chris’ story took place in the third movie, it began before the events of the second movie when Jason attacked her in the woods before she moved away from Higgins’ Haven, technically making her the second Final Girl after Jason killed Alice (Adrienne King) in her own kitchen in the beginning of Part II. Assuming she had lived in the farmhouse for longer than three years, one would wonder how she did not know about the murders from the first movie, since they happened at the lake she had lived on. Jason also seems physically vulnerable in this movie, backing away from Chris’ swinging knife, feeling pain when she does stab him and limping after being hit by her van. He even holds the handrail when going downstairs. In Part II, after Ginny convinced him that she was his mother, he was shown to be mentally vulnerable, also. This all changed once he was reanimated as undead in Part VI. Martin Jay Sadoff, the film’s 3D effects supervisor, suggested the Detroit Red Wings goalie mask from his own hockey gear for Miner’s new mask test, a look that the director loved and that stuck for the rest of the franchise. Two alternate endings were filmed: one had Jason himself jumping out of the water to pull Chris out of the canoe, and the other had Ali surviving and Jason’s body disappearing just before the credits rolled.

Although the film made almost $37 million with a budget of only $4 million, the film is considered a critical failure, earning only a 13% at Rotten Tomatoes. For fans, though, the third installment of the Friday the 13th franchise is celebrated as being the film that introduced the iconic hockey mask. Part III was the first film to remove E.T.: The Extra-Terrestrial (1982) from the #1 spot on the box office and became the second highest grossing Horror film of 1982, competing against Poltergeist, Creepshow, The Thing, and The Beast Within, among others.

The film has been offered on VHS, Betamax, Capacitance Electronic Disc, LaserDisc, and finally DVD, but only in 2D format. The 3D version of the film was eventually released as a part of the film’s DVD Deluxe Edition on February 3, 2009, a set that also included the 2D version and two pairs of 3D glasses made to look like Jason’s mask. These were also included on the following Blu-ray release later that same year. One wonders if the films would have been as iconic if they had ended the series with Part III, as had originally been intended. Would Jason have been nominated for AFI’s 100 Years… 100 Heroes & Villains list if he had never met Tommy Jarvis, been electrocuted back to life, gone to Manhattan, fought Freddy Krueger, been bested by telekinesis, gone to Hell, or been launched into space? The world may never know. 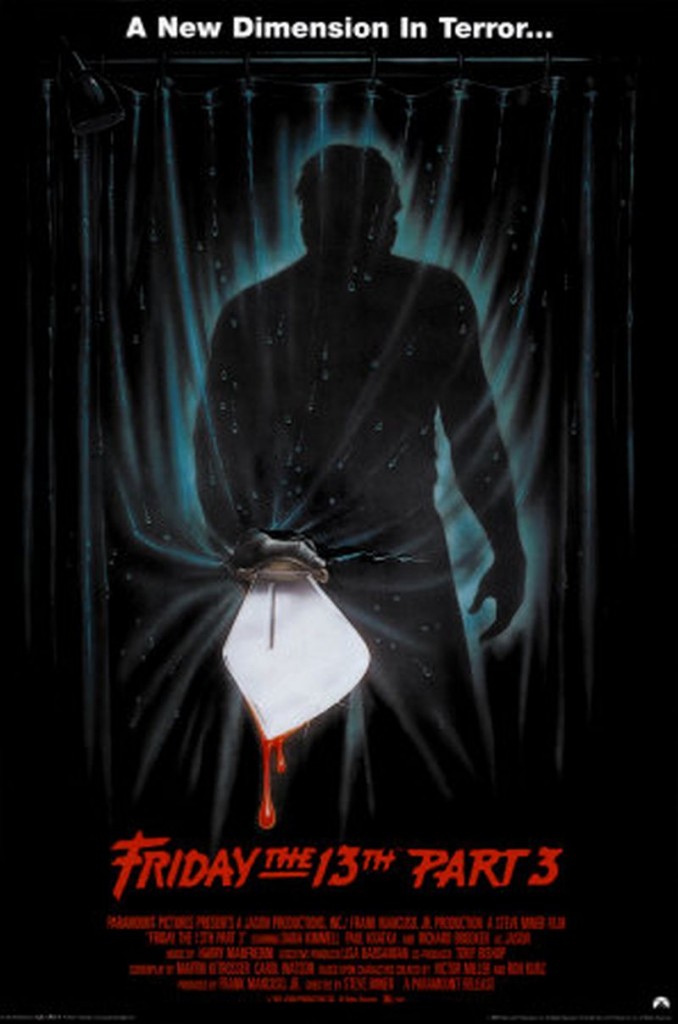 Purchase Friday the 13th Part III on DVD on Amazon