This week in horror movie history marks the 27th anniversary of Clive Barker’s directorial debut Hellraiser. Based on Mr. Barker’s novella, A Hellbound Heart, Hellraiser first opened our eyes September 18th, 1987, in theaters both throughout the United States and the UK. The production company, Cinemarque Entertainment BV, more than made up their 1 million dollar budget, garnering 4.5 million dollars the first week in the US alone. Released on VHS in 1997 and then on DVD the following year, Hellraiser was voted #19 on Bravo’s 100 Scariest Movie Moments (2004) and has a 63% fresh rating on Rotten Tomatoes.

With a name like Clive Barker attached, horror fans expect a je ne sais quoi, a certain quality to the film they are about to watch. Avid readers have known for years what kind of dark, gruesome images are conveyed by Clive Barker’s words,  but in this, his debut film, he directs a horror befitting of his own truly twisted tale. The FX were admittedly low budget, but Barker works with what he has and the passion pays off. 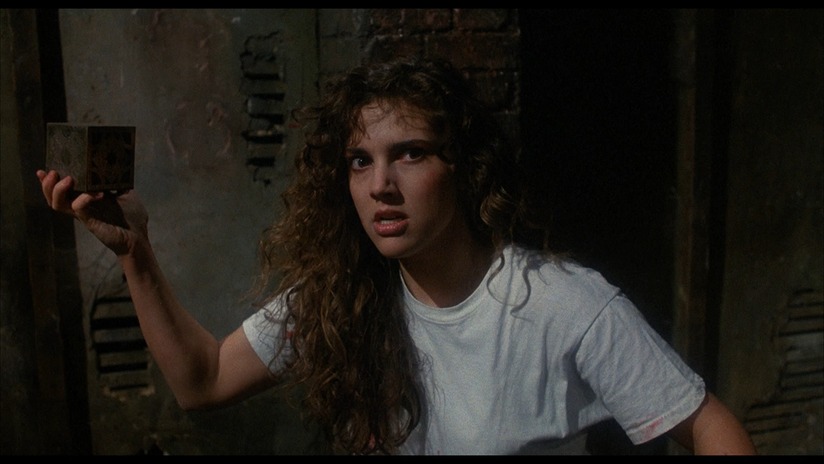 Ashley Laurence as Kirsty in Hellraiser

Movies like Hellraiser and its predecessors, Night of the Living Dead (1968) and Texas Chain Saw Massacre (1974) were shot on shoestring budgets, but are considered to be horror classics and even cornerstones in the genre.  The question may arise, how can such small budget be turned into what some would consider masterpieces? That answer is easy, it is the energy and passion behind the scenes that spill over into the resulting project that give these movies a spark otherwise missing from some bigger budgeted pictures. When the actors, director, producer, editor, script writer and even the cameramen are passionate about a piece, the result is palpable.

The film starts with Frank Cotton (Sean Chapman), a young man searching for unearthly pleasure. He is told he can have it all in the form of an old puzzle box, a device that is said to bring the solver experiences where “pleasure and pain are indivisible”. Once he solves the puzzle, though, he learns that the only pleasure he will be experiencing will be vicariously as the minions of Hell, known as Cenobites, tear him apart. He dies bloody and screaming.

Cut to Larry (Andrew Robinson) and his wife, Julia (Claire Higgins), as they decide to put down roots in Larry’s parents’ old house. Larry is all for it, but Julia still needs some convincing, although not for the reasons Larry thinks. In his mind, Julia is put off by the dirt and lack of closets for her Manolo Blahnik shoes and Coach bags, but in reality, Julia has far more emotional reasons for being skeeved out by this house. Apparently, Julia and Larry’s much attractive brother had an affair or three in the past, right there in this house. In flashbacks, we see that said brother was Frank Cotton, the box solver. Not only did they find evidence that Frank had been hiding out in the house before the couple moved in, the audience realizes that he solved the puzzle box right there in the house’s attic. Frank also left behind some photographic, sadomasochistic mementos of their affair. Julia snatches them up before Larry can see, but this secret and her continued burning passion for Frank is what drives this entire movie. Like many a vampire before him, Frank only needs a bit of blood to begin to rejuvenate. Larry helps him out with that by cutting himself on a nail and bleeding conveniently on the floor of the attic, the exact place where Frank died. Cue the ultra-slimy recomposing!  Once Julia realizes who the emaciated monster in her attic is, she never wavers in her desire to help him regain his corporeal form. She swallows her pride and picks up barflies to feed them to her lover, although she is a bit grossed out by the whole bloody thing. She even sacrifices poor Larry to the cause. Frank takes some time and many bodies to get back into shape (no pun intended), culminating with him dressing in the actual skin from ol’ Larry. 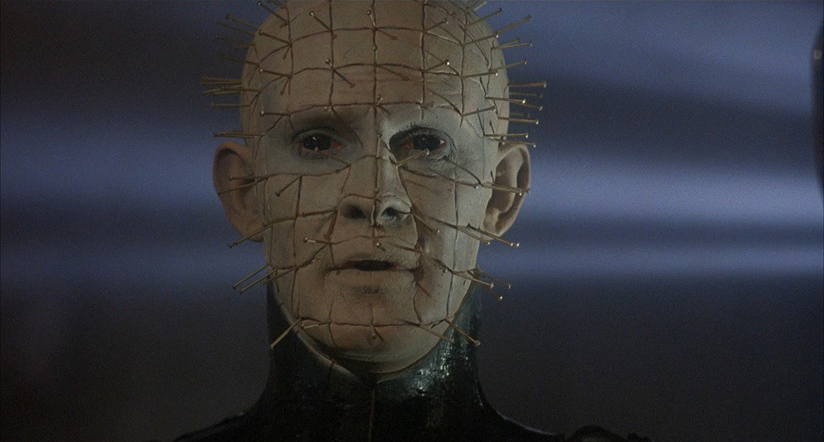 Doug Bradley as Pinhead in Hellraiser

Larry’s daughter, Kirsty (Ashley Laurence), becomes involved, purely by accident. Not only does she walk in on Uncle Frank draining some poor slob, but she also gets ahold of the puzzle box and solves it herself. This, of course, opens Hell’s door and the Cenobites zap in, wanting to drag her away. That is when they find out about their escapee, Frank Cotton, and they are not too keen on letting him walk. Pinhead & Co. do not believe her at first, since Frank now looks like Larry, but Kirsty gets him to admit out loud who he really is and there is Hell to pay. Fishhooks fly and Frank is strung up and flayed. He actually looks like he is enjoying himself when he says his famous line, “Jesus wept.” Guess there is something to all of the pleasure/pain business. The house starts to implode, but as she is escaping Kirsty manages to reset the puzzle box and send all Cenobites back where they belong. 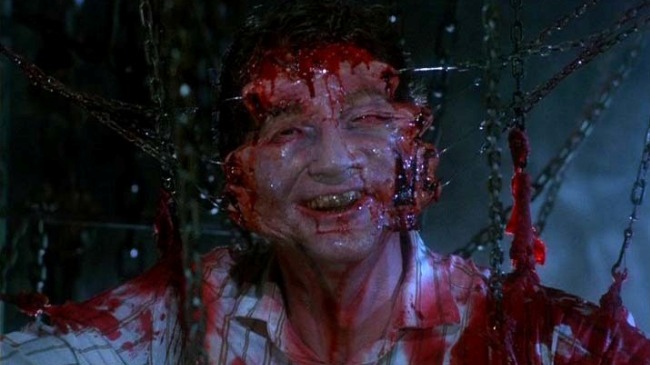 Andrew Robinson as Larry in Hellraiser

While Hellraiser is, in essence, a movie about sadomasochism and the human desire for pleasure reached in any way possible, what people remember about the movie are the Cenobites. Called “Lead Cenobite” in the credits and “Priest” in the original scripts, Pinhead (played by Doug Bradley) is an iconic figure in horror circles. As recognizable as Michael Myers and Freddy Krueger, Pinhead takes a sharp left away wise-cracking Krueger and the mute Myers. His is articulate and intelligent, and this is what scares us the most. If the bad guys are as smart as Pinhead, what chance do us humans have? Hellraiser went on to spawn eight sequels, documentaries, graphic novels, and a rumored upcoming reboot. In the words of legendary writer Stephen King “I have seen the future of horror, and his name is Clive Barker.” 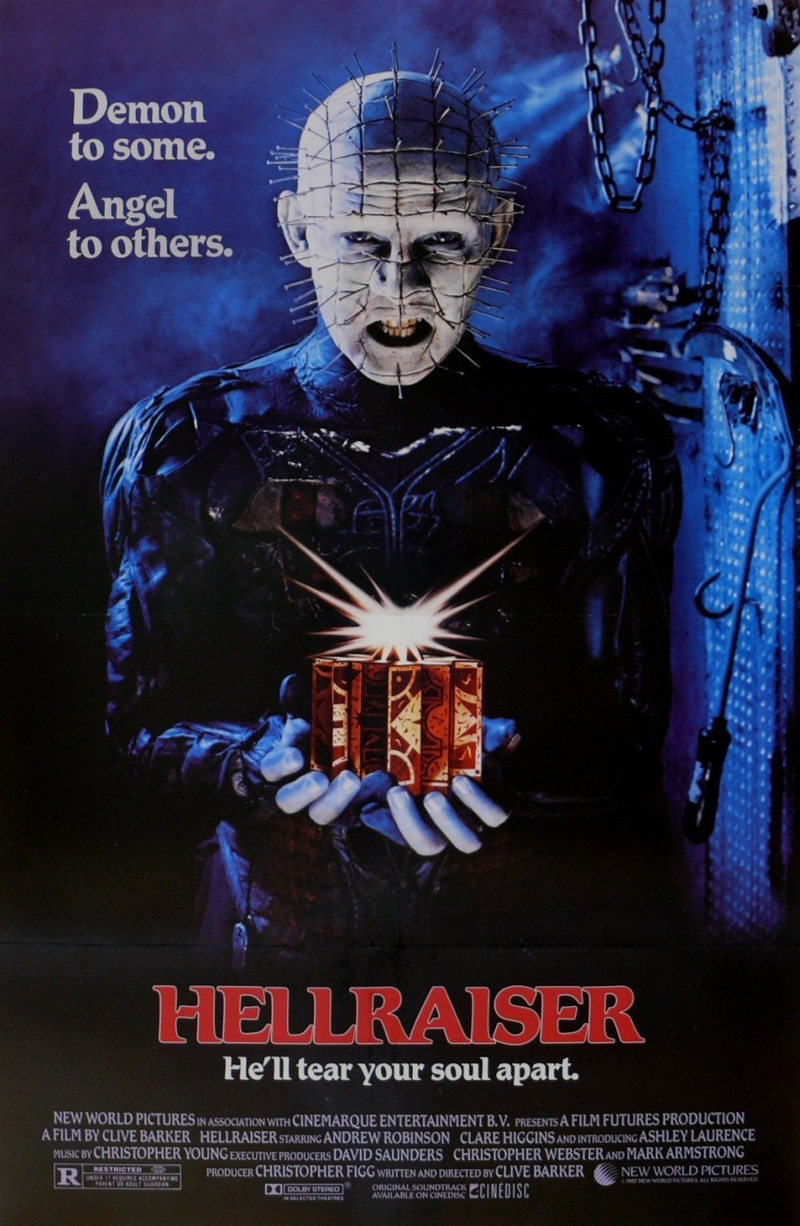