This week in Horror movie history, back on September 11th of 1992, Hellraiser III: Hell On Earth, hit theaters. The third sequel of Clive Barker’s Hellraiser epic series, Hellraiser III: Hell On Earth was the second film in the series to include the writing team of Peter Atkins (Wishmaster series, Hellraiser: Bloodline 1996) and Tony Randel (Hellbound: Hellraiser II 1988, Children of the Night 1991). Directed by Anthony Hickox (Waxwork 1988, Warlock: The Armageddon 1993), the film was released via Miramar Films, under Dimension Films, and distributed by Paramount Pictures. While not fairing as well as hoped for, on a estimated budget of $5 million, the film grossed approximately $12 million at box office, and has become a fan-favorite over the years through home-viewing consumption. 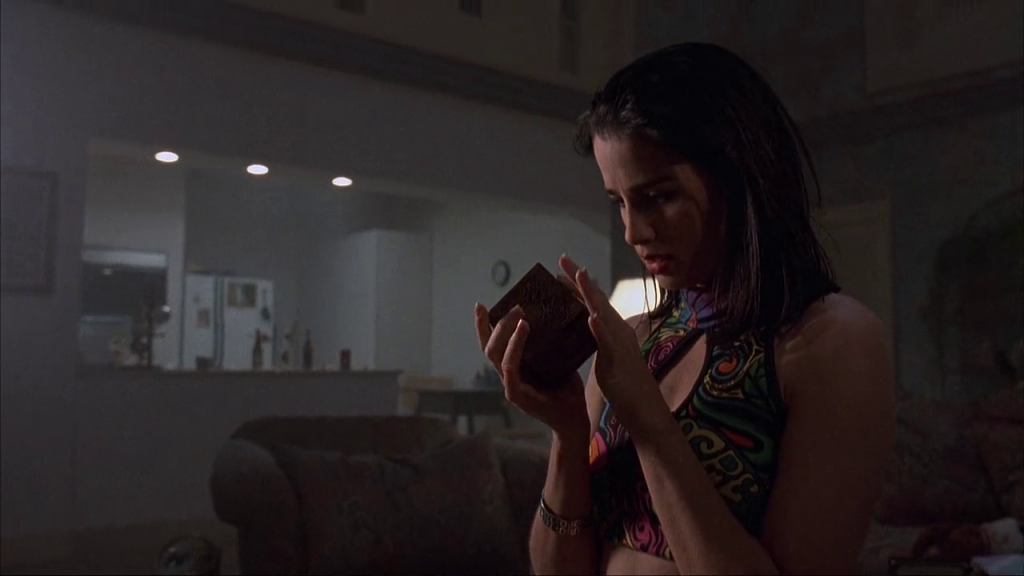 Following on from the second installment, Hellbound: Hellraiser II, Pinhead’s (played incredibly by Doug Bradley) identity has separated into his human self, the British Army Captain Elliot Spencer, and his id, or demon self, Pinhead. Spencer is in limbo, while Pinhead is trapped in the puzzle box, now in the form of a grotesque carved structure. This ends up, as always, in the human world, where the owner of a local nightclub, J.P. Monroe (Kevin Bernhardt: Counterforce 1988, The Immortals 1995), is compelled to it. Simultaneously, local television reporter Joey Summerskill (Terry Farrell: Paper Dolls TV series, Star Trek: Deep Space Nine TV series) discovers the box after an investigation, leading her to seeing a young woman torn apart by the box’s chains in a hospital Emergency Room.

She follows a young woman, Terri (Paula Marshall: Warlock: The Armageddon 1993, Nip/Tuck TV series), with the box she had previously taken from J.P’s night club. Joey helps Terri when her life unravels because of the box, and she begins having strange dreams involving Captain Elliot. The box leads Joey and Terri to view videos from the Channard Institute (the subject of Hellraiser II), and its favorite victim, Kirsty (Ashley Laurence: Hellraiser series). They uncover the history of the box and inadvertently release the horrific Cenobites. As Pinhead reeks havoc upon the world, Joey must work with Captain Elliot to stop Pinhead once and for all, before he turns them all into his dark playthings. 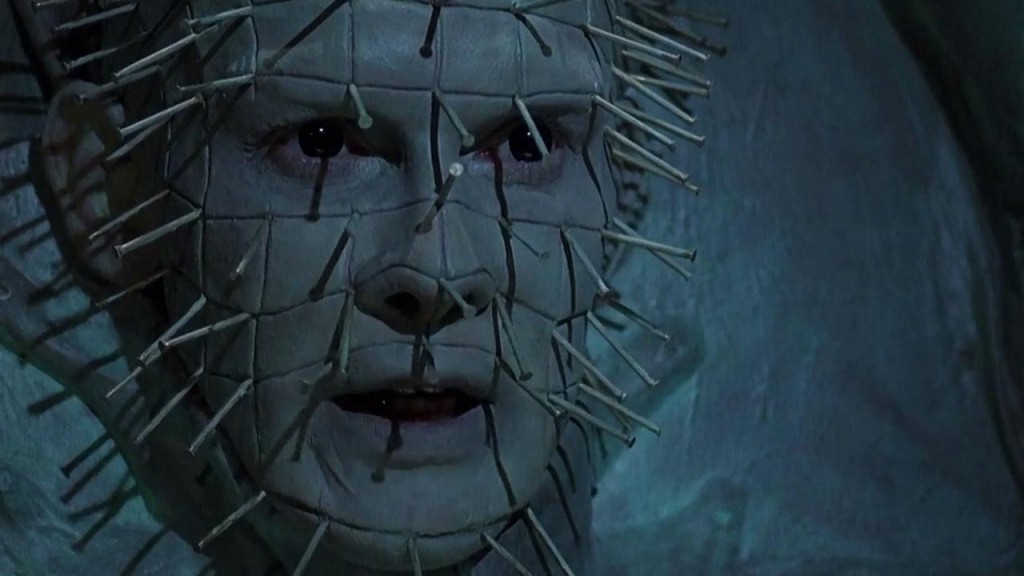 It should be noted that Clive Barker initially intended to have the history of the Lament Configuration linked with Egyptian Pyramids, or having Pinhead trapped by a holy relic. However, as he moved to Executive Producer, the original director adapted the latter concept. This changed again when Miramar purchased the series, as they preferred a director with more experience, Anthony Hickox. That being said, Hellraiser III: Hell on Earth was also the first in the series to be filmed outside the UK with most of the film’s budget contributed to the Boiler Room night club, using an already existing club in High Point, North Carolina. Locals, and friends of the film crew, made up most of the extras.

In addition, the production crew encountered issues in relation to the scene with Pinhead in church and mimicking Jesus; no church would allow them to film, and Pinhead’s lines, admitting God existed; the first time this occurred in the series. To solve the church problem, they created a set for it. Interestingly enough, this was also the first film in the series where he is actually called Pinhead. Since becoming an iconic Horror figure, as a homage to the first film, J.P. uses the line “Come to Daddy” to Terri, Frank’s famous line.

Complemented by a soundtrack including a lot of Heavy Metal, tracks from Motörhead, Ten Inch Men, Electric Love Hogs, and House of Lords rounded out the playlist. In fact, the film’s lead song, “Hellraiser” was written Ozzy Osbourne, Zakk Wylde, and Motörhead’s Lemmy Kilmister and the music video was directed by Clive Barker. For die-hard film buffs, Zach Galligan, who played Billy Peltzer in 1984’s Gremlins and 1990’s Gremlins 2: The New Batch, appears in the film as an uncredited murder victim killed during the club massacre. 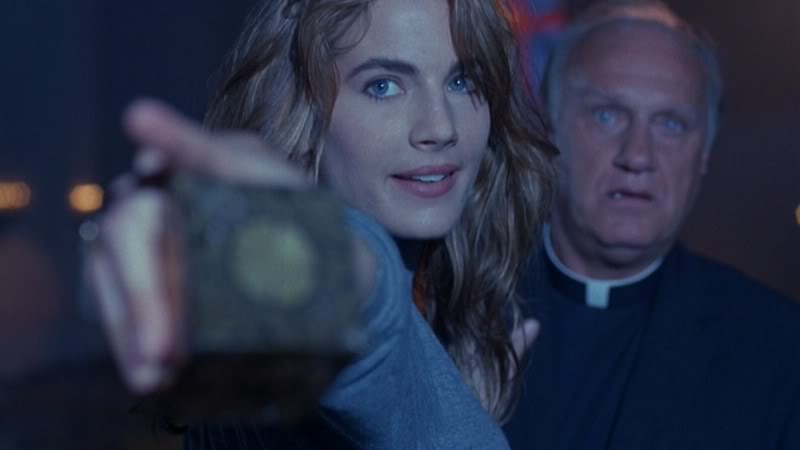 Compared to the previous two films, Hellraiser III: Hell On Earth has been criticized for taking a softer approach to the series, departing from the original plot, lesser quality special effects, and underwhelmed critics. Although, as stated, the film does have a devout following, and it has its own place in Hellraiser history. Criticism aside, the film did offer some depth into Captain Spencer/Pinhead’s character and persona, also showing a glimmer of hope for those lost in the dark that there is a way back. A stepping stone for a list of direct-to-video Hellraiser sequels to follow, Hellraiser III: Hell On Earth is worth diving into Lemarchand’s box for. 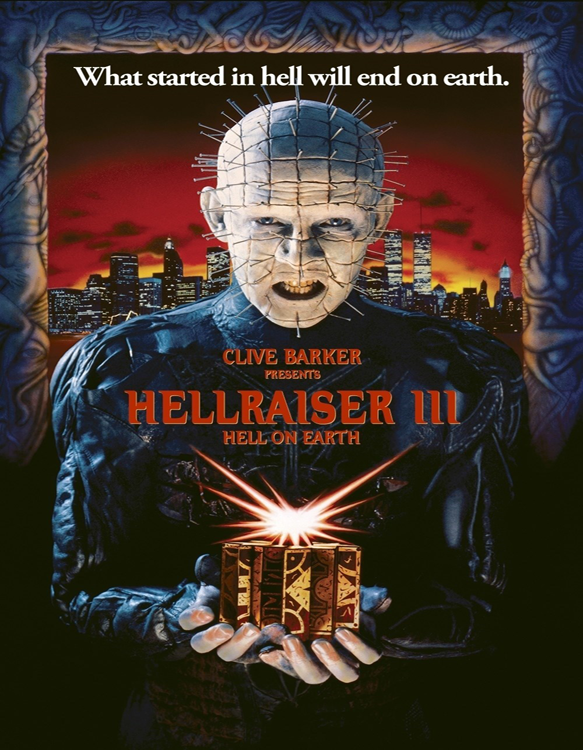 Purchase Hellraiser III: Hell on Earth on DVD on Amazon