This week in Horror movie history, back on February 28, 1986, House was released in the US and was distributed by New World Pictures. Directed by Steve Miner (Halloween H20: 20 Years Later 1998, Lake Placid 1999) and produced by Sean S. Cunningham (The Last House on the Left 1972, Friday the 13th 1980), House stars William Katt (Carrie 1976, The Greatest American Hero TV series 1981-1986), Richard Moll (Night Court TV series 1984-1992, But I’m A Cheerleader 1999), Kay Lenz (American Graffiti 1973, Death Wish 4: Crackdown 1987), Susan French (Jaws 2 1978, Flatliners 1990) and Cheers‘ most famous bar patron, Norm (George Wendt). The story of the house on the edge of two dimensions and its effects on a guilty conscience was created by Fred Dekker (Night of the Creeps 1986, Monster Squad 1987), while the screenplay was written by Ethan Wiley (House II: Second Story 1987, Children of the Corn V: Fields of Terror 1998). The music was composed by Horror movie specialist Harry Manfredini (Friday the 13 franchise, Wishmaster 1997) and the special makeup effects were done by both Oscar Award winner Barney Burman (Star Trek 2009, Grimm TV series 2015) and Brian Wade (The Thing 1982, Terminator 1984). The movie was filmed in Los Angeles and on location in Monrovia, California. 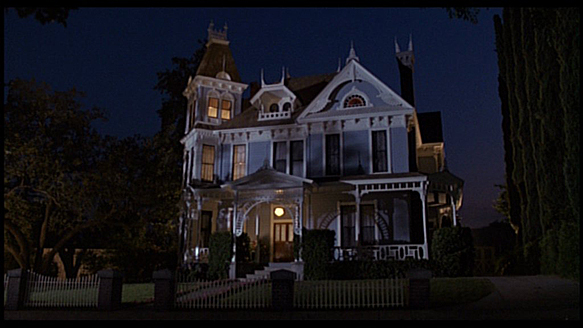 Roger Cobb (Katt) has it all: he is a survivor of the Vietnam War, has a successful writing career, is married to the beautiful Sandy (Lenz) and has a loving son, Jimmy (Mark Silver). That all changes when a visit to his favorite Aunt Elizabeth’s (French) house results in his son disappearing inside without a trace. A year of the stress of losing his son causes not only Vietnam flashbacks and writer’s block but also a divorce from Sandy. To top it all off, Aunt Elizabeth apparently commits suicide and Cobb inherits her house, the very place where his son was last seen. Although previously warned by his aunt that the house was haunted, the heartbroken author decides, against the advice to sell by Craven Real Estate, that this may be his last chance to get his act together and decides to move in. Immediately weird things begin to happen, including powerful nightmares and memories of a fallen war buddy, Big Ben (Moll). Cobb assumes his experiences are stress related. That is, until a Cenobite-like closet creature attacks him, leaving claw marks on his chest. He shows these to new friend and nosy neighbor, Harold (Wendt), who thinks Cobb is crazy. 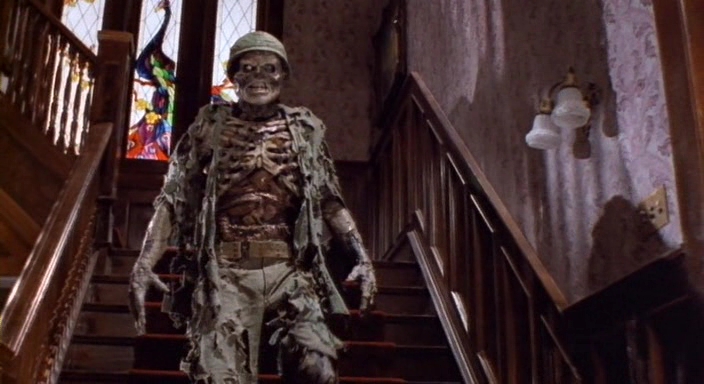 Things get freakier by the minute as gardening tools go on the attack, a mounted fish starts flopping away on the wall and Cobb’s ex, Sandy, shows up. She looks normal at first, but then turns into Sandywitch, a wrinkly, bloated corpse in red lipstick and an evening gown. Luckily, the gardening tools take her out. Cobb eventually finds a medicine cabinet-sized doorway to the other dimensional home of these creatures, where he finally reunites with his lost son. They escape from the other dimension but do not make it out of the house. The rotting corpse of Big Ben stops them and exposits the story of their time in Vietnam, where Ben had been wounded and had begged Cobb to kill him, but instead was allowed to become captured by the enemy, where he had been tortured before finally dying. After almost losing his son forever, Roger decides that the guilt over leaving Ben to the Vietnamese is not going to affect his life anymore. He stands up to his past by shoving a grenade into this walking, talking guilt trip and blows it back to Hell. As Jimmy and Cobb leave the burning house, they see an ecstatic Sandy on the lawn, and a tearful reunion ensues. Cobb has beaten his past and has regained control of his life.

Budgeted out at three million dollars, House grossed a total of nineteen million dollars over its run in US theatres, getting pushed out of the top spot during its opening weekend by the John Hughes comedy, Pretty in Pink (1986). George Wendt was not the only Cheers alumni to jump on board the House train – John Ratzenberger, who played the trivia obsessed mailman, Cliff, on Cheers, also plays the electrician/adventurer, Bill, in House II: The Second Story (1987). Including House II, there were two other sequels: House III: The Horror Show (1989) and House IV (1992). Rotten Tomatoes gives House an even-keeled score of 50% fresh. While not a frightening Horror movie, per se, House does not skimp on the supernatural, and though the comedy can sometimes be absurd, Roger’s progression from guilt ridden father and war veteran to the savior of his family is a compelling one. This movie also marks society’s switch in beliefs concerning veterans, showing that war is not bullet dodging buddy film, but a harrowing experience that can leave veterans traumatized for life. Even while taking on this serious subject, House manages to make viewers simultaneously laugh and feel nauseous, making it beloved by movie watchers from all genre lovers. 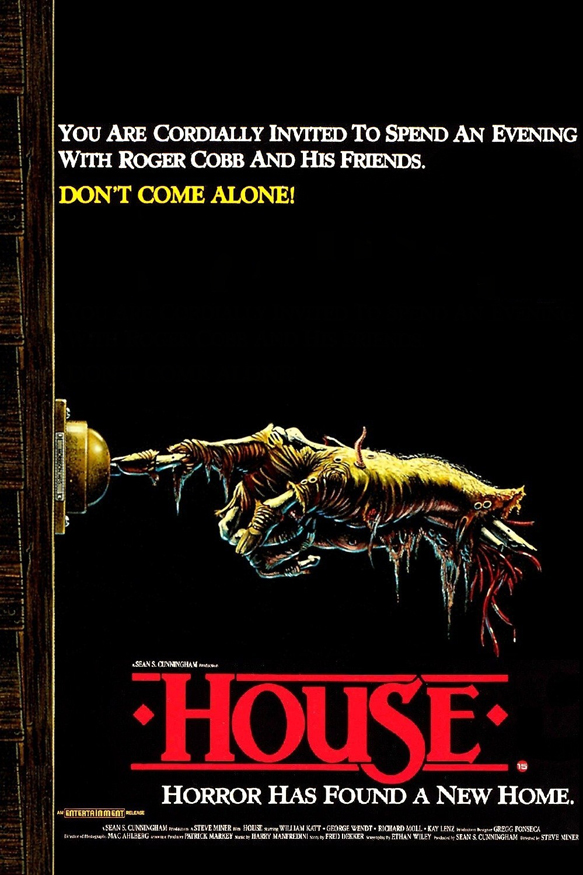 Purchase House on DVD on Amazon