This week in Horror movie history, Mars Attacks! was released nineteen years ago on December 13, 1996. Director Tim Burton’s (Edward Scissorhands 1990, Corpse Bride 2005) eponymous production company teamed up with Warner Bros. to create this satirical homage to Sci-Fi films of the ’50s and ’60s that was based on a set of Topps trading cards that had been collected by the director. With a screenplay penned by Jonathan Gems (White Mischief 1978, The Treat 1998), who was also the author of the movie’s novelization, and a score composed by the incredibly talented Danny Elfman (The Simpsons TV series, The Nightmare Before Christmas 1993), Burton created a combination Black Comedy and Political Satire that has become a staple in Sci-Fi fans’ collections. 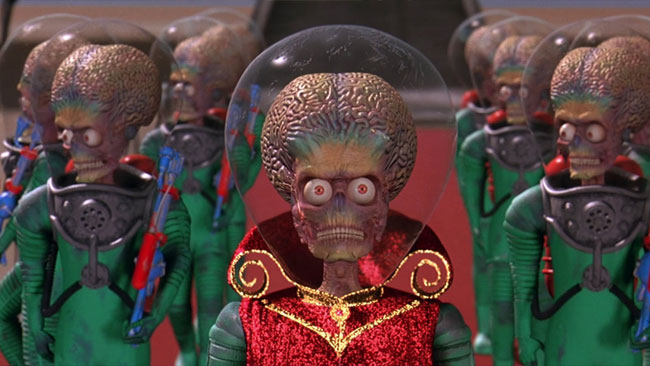 The crews from Industrial Light & Magic, Warner Digital Studio, and Mackinnon & Saunders LTD worked together with Jim Mitchell (Terminator 2: Judgment Day 1991, Jurassic Park 1993), Michael L. Fink (Blade Runner 1982, Avatar 2009), David Andrews (Harry Potter and the Sorcerer’s Stone 2001, Iron Man 2008), and Michael Lantieri (Indiana Jones and the Last Crusade 1989, Pirates of the Caribbean: Dead Man’s Chest 2006) in computer animation and both digital and practical effects to create the infamous, big-headed aliens and their bleating language, although initially, filmmakers had wanted to use stop motion animation similar to that in Burton’s previous work, 1993’s The Nightmare Before Christmas, but the plan was scrapped for budgetary reasons. Alien actress Lisa Marie (Sleepy Hollow 1999, The Lords Of Salem 2012) was a real trooper, letting herself be sewn into her full creature garb on a daily basis to keep the chance of seams being seen to a minimum. Since no one could agree on the actual sounds that the aliens made, Gems plugged the words “Ack! Ack!” into the script until a decision could be made, but then Burton decided to go with the simple syllable, using the recording of a quacking duck being played backwards as the final alien voice tone.

Even though the film was set up to take place in the 1990s, the military uniforms and equipment were all dated back to the ’50s to go along with the classic Sci-Fi movies being spoofed in the film. The skeletons that remained after people had their flesh vaporized were either red or green to line up with the Christmas-time release of the film. Those iconic skeletons were first seen in Burton’s Beetlejuice (1988) in the scene where the Maitlands were talking to their afterlife caseworker, Juno. Although the original idea was to have the aliens’ ray guns adapted with a variety of lethal attacks, including body parts being cut off, bodies themselves being bisected, exploding, melting, being shredded, and even turning into flame when being hit by a Martian ray, the desire of the filmmakers to steer clear of an R rating forced them to tone down the gore and settle for simple flesh vaporization. Coincidentally, the fish tank Martin Short’s character carries into the JFK room with his alien lady friend contains the entire main cast of Finding Nemo (2003).

The movie begins with a visit from flying saucer driving Martians setting a herd of cattle on fire before their ship explodes while still in Earth’s atmosphere. This triggers hundreds of other aliens to leave Mars and fly towards Earth in vengeance mode. The story is followed by President James Dale (Nicholson), his First Lady (Close), daughter Taffy (Portman), his cabinet, along with New York news anchors, developer Art Land (also Nicholson) and his wife (Bening), as well as guests in Nevada, and the family of US Army private Billy-Glenn Norris (Black) in Kansas. A televised conversation at a meeting with the Ambassador of the Martian invaders is incorrectly translated as them coming in peace, when in fact they plan to colonize Earth, beginning their assault immediately by vaporizing most of the surrounding crowd, including news reporter Jason Stone (Fox) and Billy-Glenn, before switching the heads of talk show host Nathalie Lake (Parker) and her Chihuahua, a scene not soon forgotten. As the President works at finding peace by bring the Ambassador to a meeting of Congress, the aliens see to it to fry a few politicians as Professor Donald Kessler (Brosnan) is knocked unconscious during his pleas for the carnage to stop. 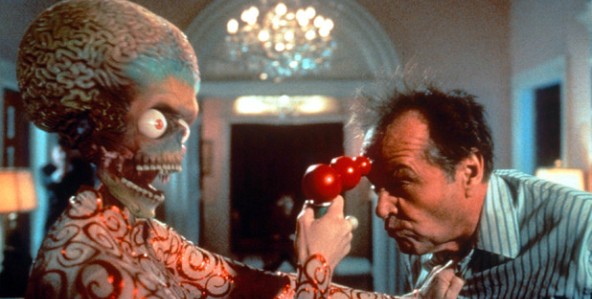 Meanwhile, an alien dressed as a prostitute sneaks into the White House with the help of Press Secretary Jerry Ross (Short), who is killed by the sexy alien when he tries to seduce her. Her cover blown, she is killed by Secret Service. This provokes all out war from the Martians as they start blowing up the world’s biggest cities, starting with Washington, D.C., and taking out national landmarks for fun. As both main and secondary characters are taken out left and right, casino employee Byron Jones (Jim Brown) leads a small group of survivors, including Barbara Land and crooner Tom Jones (himself), to an airport to find a plane to escape in. The place is crawling with Martians, though, and during a diversion in which he kills the Ambassador, Byron is overwhelmed as the rest of his group escapes. Young Richie (Haas), brother of the now deceased Billy-Glenn, and their grandmother Florence (Sylvia Sidney), figure out that the song “Indian Love Call” by Slim Whitman causes the Martians’ heads to explode. Once the military gets in on the secret, they put every ounce of their energy into blasting the song from every speaker, killing or chasing off the rest of the aliens and sending their flying saucer spiraling. Nathalie Lake, the dog-human, and Professor Kessler, both on board the ship, kiss as the Martian spacecraft crashes into the ocean. In the aftermath, young Taffy is the only surviving member of the government, and she gives Richie and his grandmother a Medal of Honor. Surprisingly, Byron has survived and is reunited with his ex-wife (Pam Grier) and their two sons. An alternate ending featured Byron being killed by the Martians and later remembered at an award ceremony by tearful Taffy in a sweet speech that brought tears to the eyes of his group of survivors in the audience.

Composer Danny Elfman won a Saturn award for Best Music for Mars Attacks!, while the movie itself was nominated for Saturns for Best Sci-Fi Film, Best Director for Burton, Best Performance by a Young Actor for Lukas Haas, Best Writer for Gems, Best Costumes for Colleen Atwood, and Best Special Effects for ILM, Warner Digital Studios, Jim Mitchell, Michael L. Fink, David Andrews, Michael Lantieri, all in 1997. Mars Attacks! also garnered nominations from the Art Director’s Guild for Feature Film and a Hugo for Best Dramatic Presentation. Between the actual filming of the movie and a twenty million dollar marketing campaign, the budget for Mars Attacks! came in at one hundred million dollars. Unfortunately, the film only made a little over one hundred one thousand dollars in the box office and is considered a flop by the studio, possibly overpowered by the similarly themed Independence Day, which was released the same year. On the similarities, Burton said, “It was just a coincidence. Nobody told me about it. I was surprised how close it was, but then it’s a pretty basic genre, I guess. Independence Day was different in tone – it was different in everything. It almost seemed like we had done kind of a Mad magazine version of Independence Day.” Kenneth Turan of the Los Angeles Times wrote: “Mars Attacks! is all 1990s cynicism and disbelief, mocking the conventions that Independence Day takes seriously.” Despite the similarities and the bleak box office numbers, the movie still got mixed reviews from critics, landing a mediocre 52% at Rotten Tomatoes with an average rating of 5.9/100. For fans of Black Comedy, classic Sci-Fi, or good, old-fashioned flesh vaporization, look no further than this Tim Burton satire. 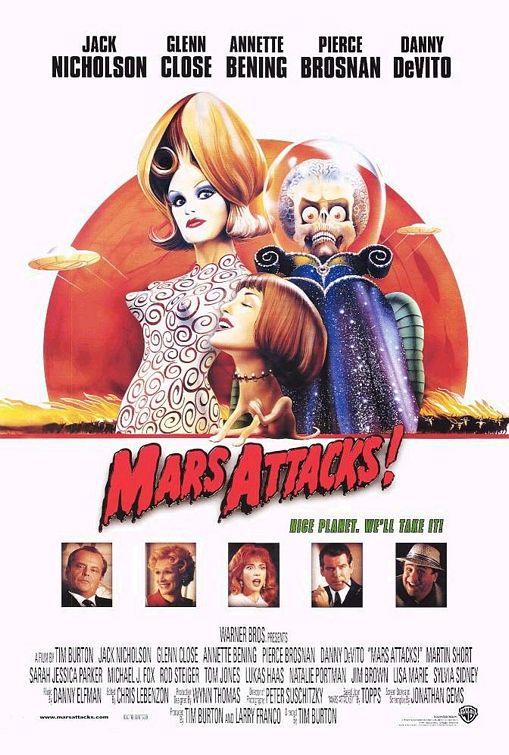