This Week in Horror Movie History – My Bloody Valentine (1981)

This week in Horror movie history, back on February 11, 1981, My Bloody Valentine was released in the US. Filmed on location at the Sydney Mines in Novia Scotia, Canada, the movie was directed by George Mihalka (The Psychic 1991, DaVinci’s Inquest television series 2002-2004), produced by John Dunning and Andre Link (Meatballs 1979, My Bloody Valentine 3D 2009), and with the screenplay by Stephen A. Miller (Archie Bunker’s Place television series 1982-1983) and John Beaird (Happy Birthday to Me 1981), both of whom worked on the 2009 remake. The music was composed by Paul Zaza (Porky’s 1982, A Christmas Story 1983) and the special effects were amazingly done by Thomas Burman (The Goonies 1985, Howard the Duck 1986). The film was produced through Canadian Film Development Corporation and distributed by Paramount Pictures. 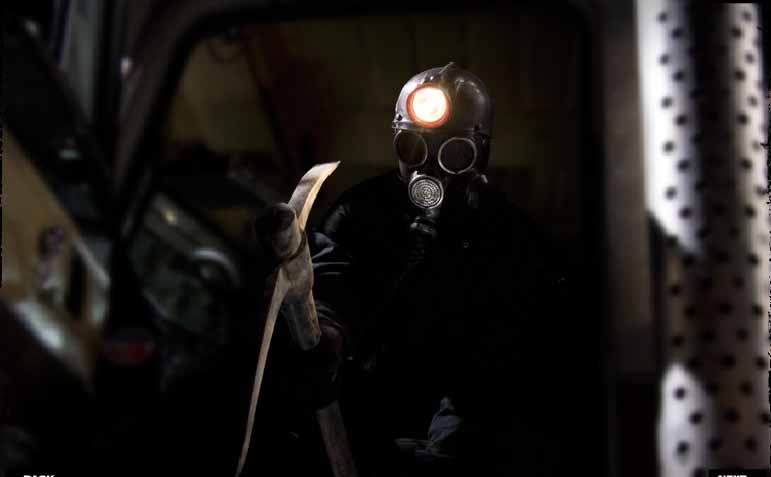 Starring Paul Kelman (Caged Man Plus One Woman 1971, Black Roses 1988), Lori Hallier (A Woman Scorned: The Betty Broderick Story 1992, Night of the Twisters 1996), Neil Affleck (The Critic animated series 1994-1995, The Simpsons animated series 1991-2000), Keith Knight (Meatballs 1979, The Class of 1984 1982), Alf Humphreys (First Blood 1982, The Uninvited 2009), Cynthia Dale (Moonstruck 1987, Street Legal television series 1988-1994), Helene Uddy (The Dead Zone 1983, Dr. Quinn: Medicine Woman television series 1993-1997), and Thomas Kovacs (Pick-up Summer 1980, Virginia Obscura 2014), My Bloody Valentine was filmed in the Sydney Mines because the producers had loved the crumbling, rustic appearance. Little did they know that, when the local townspeople had gotten wind of a movie being filmed in their dilapidated mine, they ponied up $50,000 to have the place repainted and reconstructed, much to the chagrin of the filmmakers, who had to use $75,000 of their own budget to dirty it back up. Filming in the mine took risks, with the possibility of a methane leak at any time adding the danger of a gas explosion to the fact that, at times, people and equipment were thousands of feet underground. The same as in 2015, the movie version of February 14 – Valentine’s Day – took place on a Saturday, making the day before an unlucky Friday the 13th. The identity of the actual killer was kept a secret from the cast and crew until the end scenes were being filmed, as was the actual name of the movie, using a working title of “The Secret.”

The movie begins with two fully geared miners in an underground shaft. As they reach an alcove, one of the miners removes their mask and is revealed to be a woman, where she immediately starts seducing the other miner. This gets her a pickaxe to the chest. The mine resides in a small town named Valentine Bluffs, where residents are preparing for the first Valentine’s Day party in years. As they discuss the party, Mayor Hanniger (Larry Reynolds) exposits about a past tragedy to Laundromat owner Mabel Osborne (Patricia Hamilton), bringing up another Valentine’s party from twenty years previous where five men had been trapped underground when their supervisors had chosen to go to the party rather than man their mine posts. Four of the five died, leaving behind Harry Warden, who, a year later, killed his former supervisors and cut out their hearts, leaving them in heart-shaped candy boxes with a warning to never hold another Valentine’s Day dance. Harry has been locked up since, and his violence and threats seem a thing of the past, so the town excitedly plans the party. 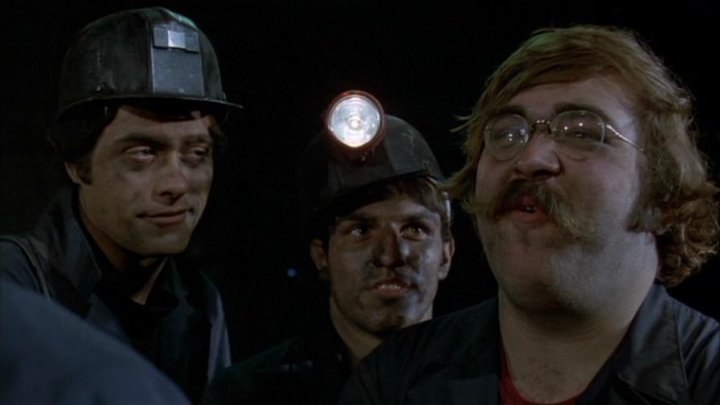 Mayor’s son T.J. (Kelman) has just returned from an unexpected absence to find his old girlfriend, Sarah (Hallier), is now dating his best friend, Axel (Affleck), causing tension. Meanwhile, Mayor Hanniger and police chief Jake Newby (Don Franks) find a Valentine’s Day candy box with a human heart tucked inside, along with a note warning them to call off the dance. Mabel is found dead and roasted in one of her own dryers, prompting an investigation on the supposedly institutionalized Harry Warden. The asylum has no record of a Harry Warden. The dance is finally cancelled, but the young people still want to party, so they move the festivities to the mine. The gas-masked killer knows though, and, after another heart filled candy box warning to Newby, begins killing the kids in ever more gruesome ways. First the cook, Dave (Carl Marotte), is drowned in boiling water, his heart cut out and left bubbling away with the hot dogs. Sylvia (Udy) is killed by the mine shower nozzle while waiting for boyfriend, John (Rob Stein).

Before they are discovered, Hollis (Knight), Patty (Dale), Sarah, Howard (Humphreys), Michael (Kovacs) and Harriet (Terry Waterland) decide to explore the mine, where Harriet and Michael sneak off to have sex. The killer impales them with a giant drill bit. When Hollis finds them, he is killed by a nail gun to the head. The others find dead Sylvia and a frightened John. In the meantime, Dave’s body has been found, leading to the assumption of Harry Warden’s involvement, so Axel and T.J. send everyone home but decide to find the others wandering the mine. Newby runs into a few of the escapees and they tell him about the bodies underground. Found by Axel and T.J. after Howard abandoned them, Patty and Sarah follow the boys up a service ladder to safety where Howard’s decapitated body drops on them, spraying them with blood and scaring them back down. Patty is attacked and gutted by the masked maniac. As they run away, Axel lags behind, screams and disappears. The killer attacks the three remaining partiers one last time, a battle that dislodges the wooden mine supports, causing an avalanche that blocks escape. It is then that the killer is revealed to be Axel. He had seen his dad, Harry Warden’s supervisor, killed those twenty years previous, and the Valentine’s Day dance triggered his unstable sanity. He even faked his own death to continue the slaughter. Another cave in traps Axel under the rubble. When the cops finally arrive and try to free Axel’s body, they find only an arm. Axel had cut off his own arm to escape, and is last seen bleeding and stumbling down the mine tunnels, laughing psychotically and asking Sarah to be his bloody Valentine. 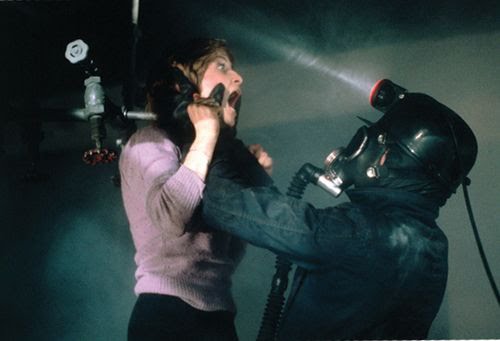 Named by Quentin Tarantino as his favorite slasher film of all time, My Bloody Valentine has become a cult favorite for fans of the Horror genre. The movie grossed over six million dollars at the United States box office, even though a rumored nine minutes of film had been left on the cutting room floor after the MPAA refused to grant a R rating without some of the violence and gore taken out. Three of those minutes were reinstated by Lionsgate after they bought the rights from Paramount and released the DVD in 2009. That same year, the remake My Bloody Valentine 3D was released in theatres. Directed by Patrick Lussier (Scream 1996, Drive Angry 2011) and starring Jensen Ackles (Supernatural television series 2005-2015, Devour 2005) and Jamie King (Sin City 2005, Hart of Dixie television series 2011-2015), the remake was poorly received by Horror fans, despite the added 3D element. The Dublin, Ireland Alt Rock band My Bloody Valentine got their name from the title of this film, and the Pop Punk band Good Charlotte has a song title of the same name. Ranked in at a 40% fresh rating on Rotten Tomatoes, Metacritic gives My Bloody Valentine a score of fifty-one out of one hundred, giving it mixed reviews. The March 30, 2007 issue of Entertainment Weekly ranked the film 17th in its list of guilty pleasure movies, among classics such as Dawn of the Dead (1978) and Escape From New York (1981), and called My Bloody Valentine “the most criminally underappreciated of the slasher genre.” Fans of Horror genre movies know a great hacker when they see one, and the love for this movie supersedes all critical ratings. After all, it is Valentine’s Day. 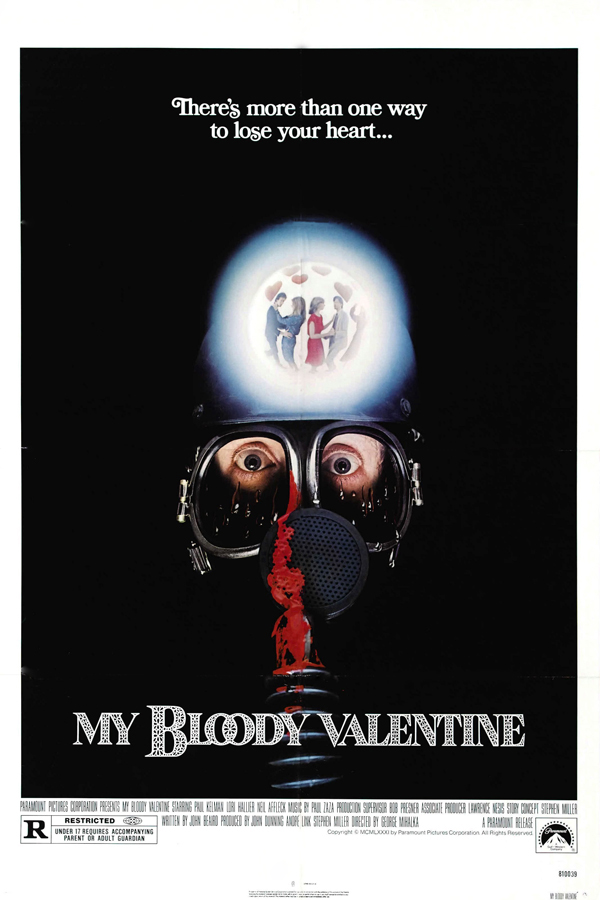 Purchase My Bloody Valentine on Blu-Ray/DVD on Amazon