This week in Horror movie history, Phantasm was released March 28, 1979 through New Breed Productions. Bram Stoker award winner Don Coscarelli (Beastmaster 1982, Bubba Ho-Tep 2002) wrote, directed, edited, and shot the film, which was produced by Coscarelli’s father, Dac, along with Beastmaster‘s Paul Pepperman. The score for Phantasm was composed by Fred Morrow (Soylent Green 1973, Scarecrow 1973) and Malcolm Seagrave in his only feature film, which stars the late, great Angus Scrimm (Subspecies 1991, Mindwarp 1992), A. Michael Baldwin (Voyagers TV series, The Pick-Axe Murders Part III: The Final Chapter 2014), Bill Thornbury (The Secrets of Midland Heights TV series, The Lost Empire 1984), and Reggie Bannister (Bubba Ho-Tep 2002, Small Town Saturday Night 2010); a quartet that has continued for the entire Phantasm series. Both Coscarelli’s and Bannister’s parents had uncredited parts as funeral guests. Scrimm, who passed away on January 9, 2016, at the age of eighty-nine, also wrote liner notes for Capital Records for thirty years under his given name, Rory Guy, winning him a Grammy in 1974 for his notes on Korngold: The Classic Erich Wolfgang Korngold. 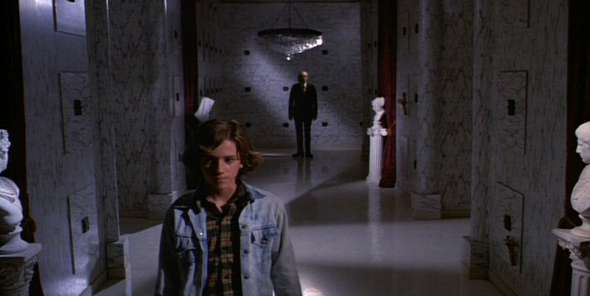 The idea for the nightmare-inducing Sentinel Spheres came to Coscarelli in a dream – more like nightmare – where he was chased down long, unending hallways by a murderous silver ball intent on destruction, and he got the idea for the living, severed finger after poking his own digit through a Styrofoam cup and wiggling it around, loving the visual effect. The actual title of the film was inspired by Edgar Allen Poe, who used the word “phantasm” often in his works. To make the 6’4″ Scrimm’s The Tall Man appear even more gigantic, the actor  was dressed in suits that were several sizes too small and wore 3″ platform shoes. In the scene before the funeral, when Jody is first confronted by The Tall Man, Thornbury was actually almost as tall as Scrimm, so the older gent had to perform his scene while standing on an apple crate to appear taller.

It is rumored that the late Motorhead frontman Lemmy Kilmister wrote the band’s hit song, “Ace of Spades,” while sitting through the New York screening of Phantasm after noticing that Mike’s head looked like the ace of spades, scribbling lyrics in a notebook with a pencil given to him by Salem’s Lot’s David Soul. Death Metal band Entombed lent their song, “Left Hand Path,” as the theme for the film, although only the middle section before the solos was used. The Hungarian Black Metal Thrash band Tormenter used that same bit of music in the title track introduction of their 1988 album, Anno Domini. Black Metal band Marduk used the line, “The funeral is about to begin, sir,” in their track, “Hearse,” from their 2003 album, World Funeral. That same line was also used by both Death Metal bands The Ravenous and Mortician in subsequent albums. 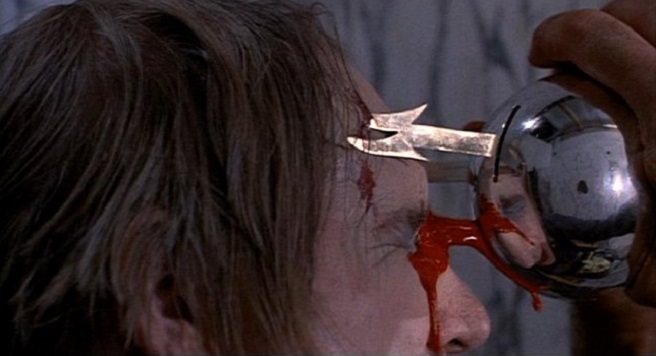 The original run-time for Phantasm was over three hours long, so Coscarelli cut it way back. The unused footage was found in the 1990’s and used for the framework for Phantasm IV: Oblivion (1998). Elderly metal worker Willard Green designed those iconic Sentinel Spheres for a mere one thousand dollars, but passed away in 1977 before seeing his work on the big screen. Filming the silver balls was simply done – a baseball pitcher would pitch the balls from behind the camera and then the scene was printed backwards. The coffin that The Tall Man launches into the back of the hearse was actually empty, made of super light balsa wood and helped along by a yanked rope. Although the alien dwarves resemble the Jawas from Stars Wars: A New Hope (1977), they were actually designed before the intergalactic Sci-Fi film was released.

A poor man’s Suspiria (1977), Phantasm is seemingly deliberate in its unexplained, incoherent storyline that was produced more from the choppy editing than any intention by Coscarelli. This Independent film strategically toes the line between raw, lo-fi quality and a devil-may-care attitude that gives it a bold yet surreal atmosphere and a loaded sense of dread. The male heavy cast and teenage protagonist make Phantasm “a predominately male story,” says Coscarelli, that “gives expression to all their (young boys) insecurities and fears,” states Scrimm. Everything in Phantasm – from Mike (Baldwin) and Jody’s (Thornbury) orphaned status to the idea that The Tall Man works as an undertaker – screams death, loss, and mourning.

In a twisted way, Mike’s experiences with the alien mortician help him get over the loss of his parents, putting him through his paces and taking him to a place where he can accept their future absence in his life. He is able to realize that the only place death can be conquered is in one’s dreams, so to be awake is to face a reality without passed on loved ones. The film slips easily from awake to dream state with what Marc Savlov of the Austin Chronicle calls “psychological mind games that purposefully blur the line between waking and dreaming.” One is never sure if Mike is awake or asleep at any time, especially after the last scene with Reggie (Bannister) in their living room. Blurred visuals, out of proportion characters, and a constant sense of despair are what make Phantasm the ultimate in off-kilter, idiosyncratic, open-ended Horror movies. 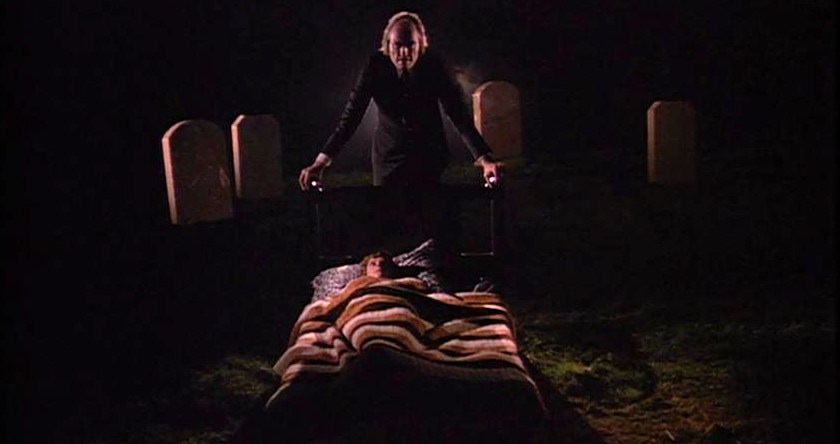 Many have given props to Phantasm over the years, from a Best Horror Film nod from the Academy of Science Fiction, Fantasy, and Horror Films in 1980 to Bravo ranking it #25 on their 100 Scariest Movie Moments list to Time Out London placing it at #75 out of their own list of a hundred best Horror films. UGO honored both the film and The Tall Man with the #7 out of eleven slot on their Top Terrifying Supernatural Moments and drive-in movie aficionado Joe Bob Briggs includes it as #20 in his 25 Scariest DVDs Ever list.

A major success at the Box Office, the film made over twelve million dollars in theatres after barely squeaking by with a three hundred thousand dollar budget. So far, three sequels to Phantasm have been released: Phantasm II (1988), Phantasm III: Lord of the Dead (1994), and Phantasm IV: Oblivion (1998), and the fourth sequel, Phantasm: Ravager, is set to be released this year. The sequels have also been printed in graphic novel form, while Cascarelli’s late mother wrote a book based on the movie’s initial screenplay that was published posthumously in 2002, although only five hundred copies were printed, so finding an original is near to impossible. MGM released the film initially on laserdisc in 1995. Both MGM and Anchor Bay have released the original Phantasm on DVD – the former in August of 1998 and the latter on April 10, 2007.

From a young boy’s dreams to the silver movie screen, Phantasm is a journey that Horror lovers are willing to take again and again, always coming away with new insight into what makes this film tick, even thirty-nine years later. 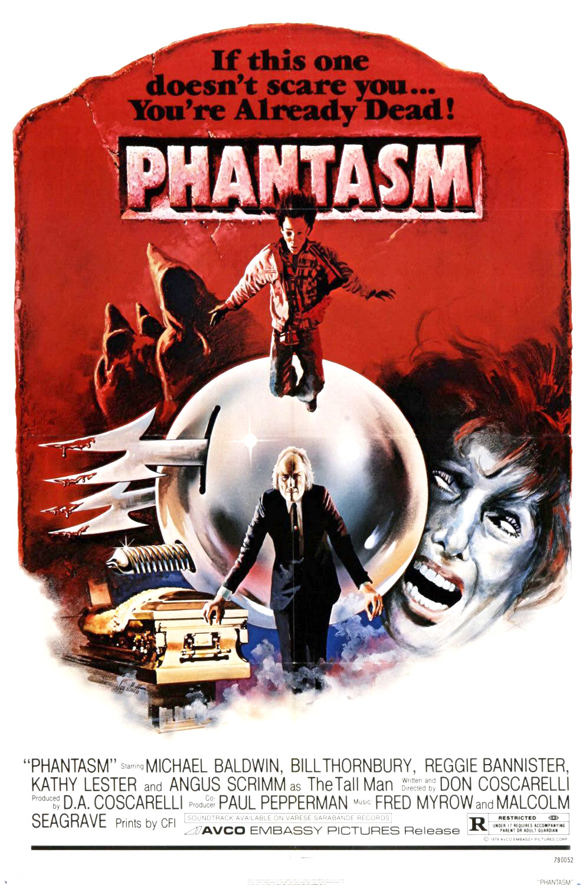 Purchase Phantasm on DVD on Amazon