This week in Horror movie history, back on July 8th, 1988, Phantasm II drilled its way into theaters. It had been almost a decade since the release of 1979’s Phantasm, the little Indie Horror/Sci-Fi film directed by Don Coscarelli (Phantasm film series) that became a huge success. With that success, Universal Pictures was interested in doing a sequel with a an estimated budget of $3,000,000 as compared to $300,000 budget of the original Phantasm. All the more a reason to look back on the often forgotten Phantasm II, which helped usher in an extensive franchise to follow. 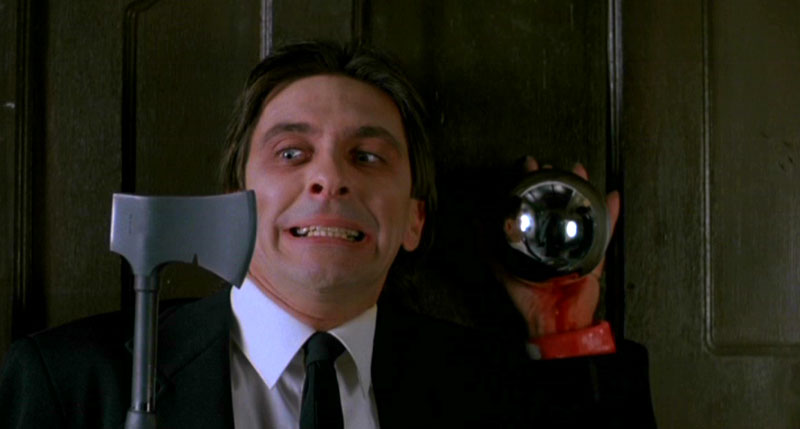 Phantasm II opens up with a young girl, Liz (Paula Irvine: Bates Motel TV movie 1987, Santa Barbara TV series) waking from a dream and going through her journal talking about her visions of Mike (A. Michael Baldwin: Phantasm III: Lord of the Dead 1994, Phantasm IV: Oblivion 1998) and Reggie (Reggie Bannister: Phantasm series) and the Tall Man (Angus Scrimm: Phantasm series). Through this monologue, the final sequence of Phantasm is rehashed with a few new bits added of the Tall Man exiting his hearse and a new version of his famous “Boyyyyy” right before Mike gets pulled through his closet mirror. Downstairs, Reggie hears the shattering glass and runs upstairs just in time to see The Tall Man and his dwarfish minions pulling Mike over the broken mirror from the closet. He runs downstairs, grabs a shotgun, and while looking for shells, Reggie encounters a vicious Dwarf that tries to gnaw his face.

Reggie is able to beat it to death with the gun only to turn around and see that he is backed against the stove by many hooded Dwarves, so he puts out the pilot lights in the stove and makes a run for it. Then climbs up the laundry chute, knocks another Dwarf down the stairs with a baseball bat, grabs Mike, and jumps out the window just as the army of Dwarves climbs up the stairs after them. As the two hobble away, Reggie’s house explodes.

Liz continues through her journal and reveals that she is in love with Mike and pleads for his help because, The Tall Man is coming for her. Mike (James LeGros: Drugstore Cowboy 1989, Point Break 1991) awakes in a mental institution seven years after the events of Phantasm. He tells a story of how he is much better and is then released. Later that night, Mike is in a cemetery digging up graves when Reggie finds him. Mike opens a casket to reveal it is empty and asks Reggie for his help, but Reggie does not believe him saying that all that stuff with The Tall Man and blowing up his own house never happened. On the way home, Mike has a vision of gas being turned on and The Tall Man saying, “Welcome home, boy,” and just as they pull up to Reggie’s house, it explodes with his family inside. The next scene is a graveside service where Reggie says, “C’mon, Mike. We’ve got things to do,” and they set off to find Liz before The Tall Man does. 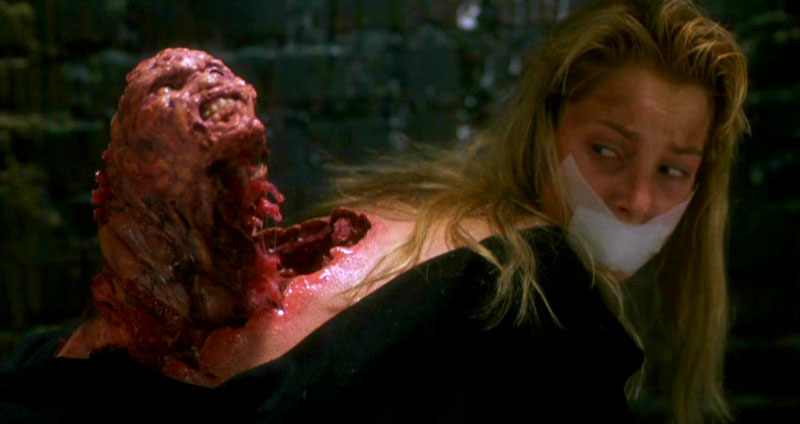 This is the film where Reggie turned from surrogate big brother into badass protector, but even with the invention of the quad-barrel shotgun, it was still no easy task to protect Mike from the clutches of The Tall Man. Liz was an interesting character for the series because she was just like Mike: plagued by visions of death, monsters, and The Tall Man. She was also a love interest for Mike. Because Phantasm II had big studio backing, they made Don Coscarelli make a difficult decision: keep Reggie Bannister or A. Michael Baldwin, but you cannot keep both. With a heavy heart, Coscarelli opted to sacrifice Baldwin to appease the studio gods, a grudge that Baldwin still holds to this day, though he plays it off with a smirk. James Le Gros got the part, but he seemed out of place, like the chemistry with the cast was out of sync, or just plain was not there. Alchemy (Samantha Phillips: Sonny Boy 1987, Weekend at Bernie’s II 1993) came in as another sort of “Lady in Lavender” type character. Mike first encounters her naked on a slab in a mausoleum complete with a Y-incision, but when he turns back around, she is gone. Then, while on the road, Mike awakens in the car to find her in the back seat.

Before its release, Phantasm II suffered many cuts for timing and gore. The one scene in particular that was hacked up the most was the sphere drilling scene with Father Meyers (Kenneth Tigar: Just One of the Guys 1985, The Avengers 2012). The iconic drilling scene from Phantasm I was pretty gory and uncut. The Phantasm II version was much bloodier and had to be cut. Barely any blood was shown flying out of the back of the sphere, and just before blood was supposed to be shooting out, flashes of Liz and The Tall Man were intercut. There was a love scene between Mike and Liz that took place in a dream setting, showcasing their psychic abilities, but that was also axed because it was actually a pretty terrible scene. All of these excised scenes exist in the Workprint that came with the German edition of Phantasm II. For years, Phantasm II lacked a US DVD release until Anchor Bay released a barest of bones edition. Then in 2013, Scream Factory released an everything-but-the-kitchen-sink Blu-Ray version, and fans went nuts. Some of the workprint was in there, but one will only find it in its entirety on the German disc. 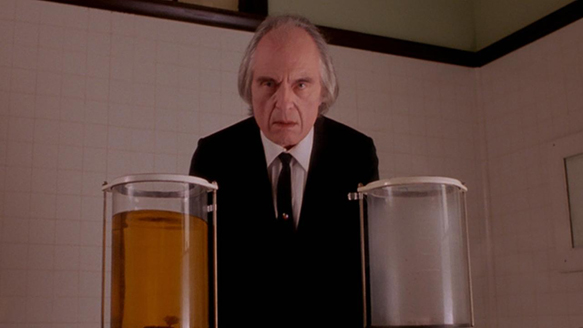 In its opening weekend, Phantasm II made an estimated $3,012,000 and grossed approximately $7,282,851 by the end of its theatrical run. Running up against other summer blockbuster hits of the season such as Who Framed Roger Rabbit, while fans liked the film, critics utterly destroyed it. In fact, Roger Ebert rated the film one out of four stars and likened it to an extended dream without logic or a coherent plot, full of nightmarish images and no character development. Carrie Rickey of the Philadelphia Inquirer described the film as “a series of apparently unrelated horrors visited upon good-looking blond people” and criticized the gore. Roger Hurlburt of the Sun-Sentinel criticized LeGros’ acting and called the film a waste of time. Critics opinions aside, Phantasm II, while not the best of the series, is still a good film as it advanced the old is it real or just a dream premise of the first film. 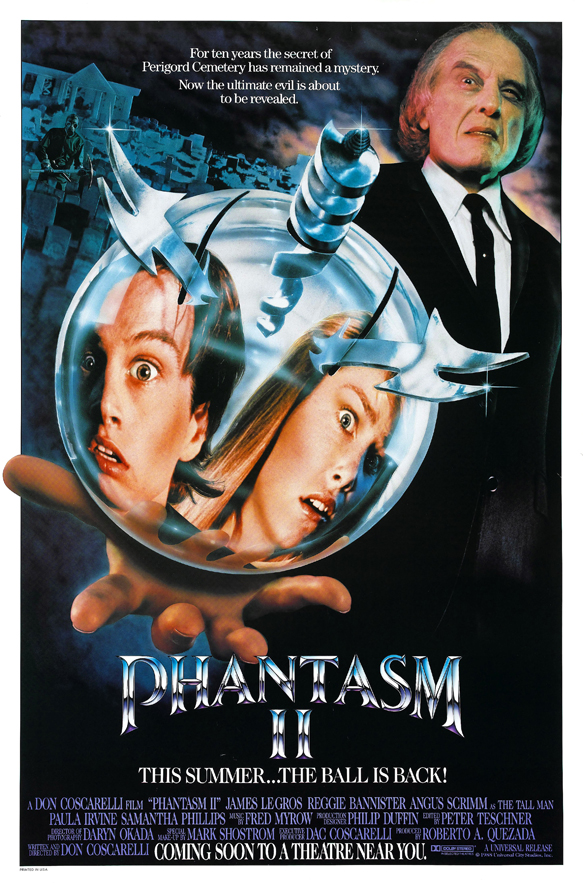