This week in Horror movie history, Pieces was released in the US on Friday September 23, 1983 via Almena Film Productions. Also known as Mil gritos tiene la noche (A Thousand Screams in the Night), the movie was directed by Juan Piquer Simón (Supersonic Man 1979, Slugs: The Movie 1988) with a script written by Exploitation kings Joe D’Amato (as John Shadow – Beyond the Darkness 1979, Anthropophagus 1980) and Dick Randall (Don’t Open Until Christmas 1984, Slaughter High 1986), while Randall and Stephen Minasian (The Poseidon Exposition 1973, Space Warriors 2000 1985) produced. The surreal, unearthly music was composed by Librado Pastor (Don’t Panic 1978, Extra Terrestrial Visitors 1983), while the gore-tastic special effects were created by Basilio Cortijo (Slugs 1988, The Rift 1990). 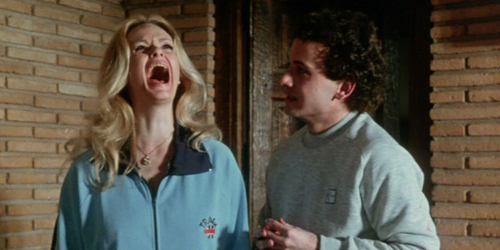 The storyline for Pieces is a pretty obscure one, with an almost random smattering of scenes that barely flow into a cohesive storyline. But one does not watch Pieces for its building tension or linear dialogue. This Grindhouse masterpiece is loved for its unadulterated violence and uncanny knack for cheesiness. In the “so bad it is brilliant” category, Pieces takes place on what is supposed to be a Boston college campus, although Simón apparently never stepped foot into an American college – or any college, for that matter – with kids smoking pot and hitting on teachers right in the hallways. The acting is scene chewing it its finest. A most memorable line, “Bastard! Bastard! BASTARD!” reminds one of the classic “Oh. My. Gaaaawd!” from the cheesy masterpiece Troll 2 (1990). 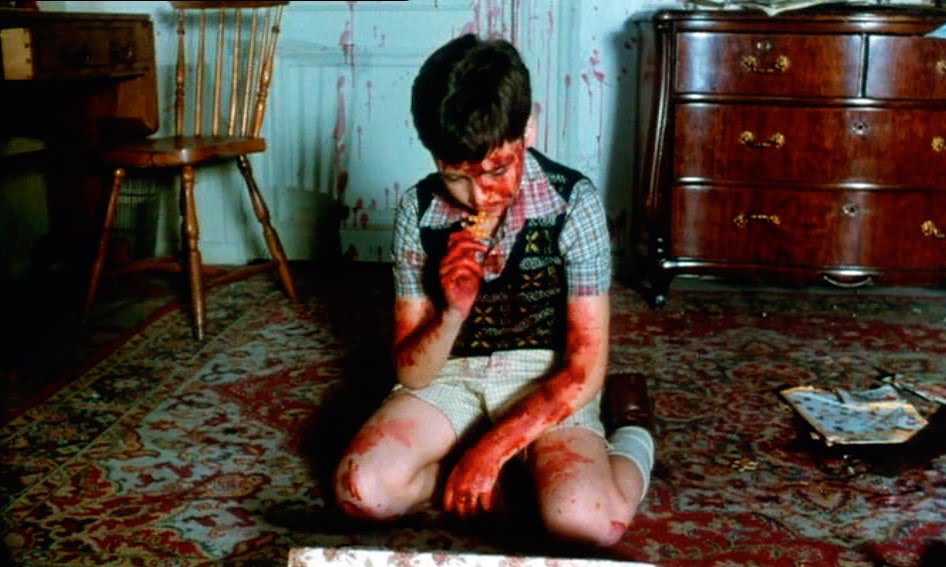 There is also no shortage of blood. In fact, one would be pressed to find a scene where no blood at all was present. The suspension of disbelief muscle must be strong in those watching, as many inconstancies and factual errors pop up as often as the blood spatter. The film’s opening scene – showing ten-year-old Timmy murder his own mother when she threatens to throw away the naked lady jigsaw puzzle that she caught him working on – takes place in 1942. In that scene, mom shrieks for a plastic garbage bag to clean up the puzzle, even though they were not even invented until 1950. As he saws away at her body parts, a touch tone phone rings, although that sort of phone was not introduced to the public until 1963. Behind Timmy is a New England Patriot’s pennant flag. The Patriots football team was not founded until 1959. And that is all in the first five minutes. It almost makes one’s brain hurt.

One would think, with a description like this, that Pieces is a terrible movie. Au contraire mon frère, it is entirely the opposite. These are the markings of grindhouse at its finest. If one just opens their mind and follows along, the ride is well worth it. There are chainsaw wielding maniacs who behead people in board daylight, tennis pros who do not know the difference between a backhand and a volley, random mirrors being broken for no apparent reason, pants peeing, puzzle references, castrating corpses, matricide and even a well timed kung fu attack. Who could ask for anything more? 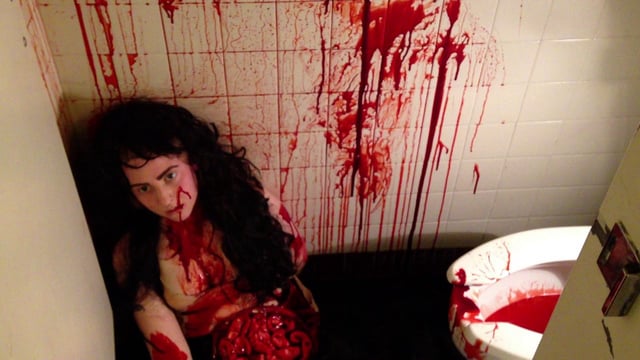 If a movie were ever made purely to show up on Joel Hodgson’s Satellite of Love, Pieces was it. The film is also a favorite of Horror Director Eli Roth (Cabin Fever 2002, Green Inferno 2015), who showed this fantastic gorefest to a sold out crowd at The New Beverly in Los Angeles in 2008, along with 1973’s Torso. Of course, a movie that uses actual pig carcasses to stand in for the girls so filmmakers could really shop them up with chainsaws is bound to attract the eye of that well-known, blood thirsty Horror fan.

Before its Director’s cut DVD release on October 28, 2008, by Grindhouse Releasing, Pieces was a tough movie to find despite its cult classic status. This two-disc, uncensored Director’s cut contains an interview with Juan Piquer Simón himself and Paul L. Smith, the actor who played Willard, along with the restored original soundtrack by Librado Pastor. There is also a video of Roth as he prepared to show the film to his Los Angeles audience. British company Arrow Video also released the movie on DVD in an anamorphic aspect ratio version with an introduction by Jack Taylor, who played Professor Arthur Brown. Although Rotten Tomatoes on gives Pieces a 22% rotten rating, fans of Grindhouse and Exploitation are not so quick to judge, as they know a gem when they find one. For an evening of equal measures of blood and cheese, be sure to check out Pieces! 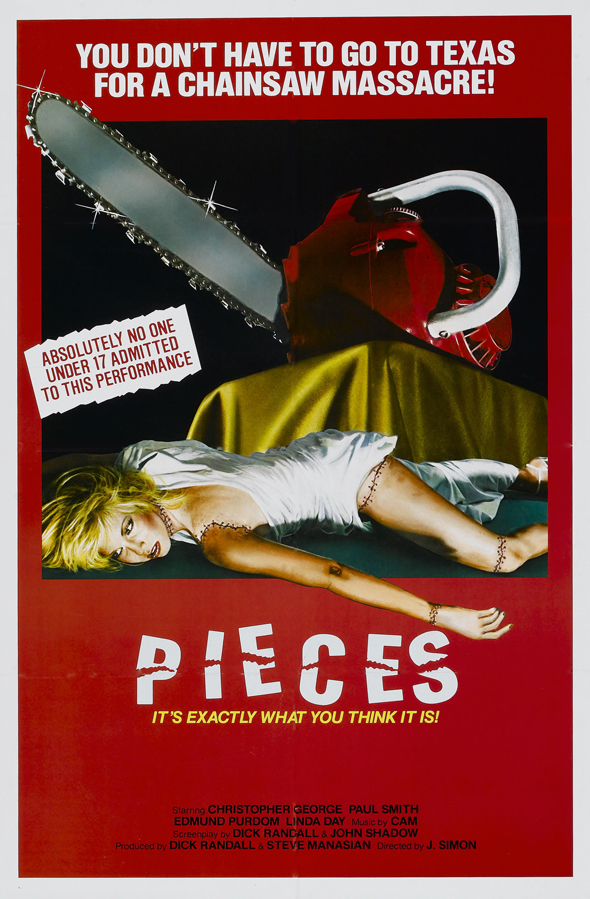 Purchase Pieces on DVD on Amazon