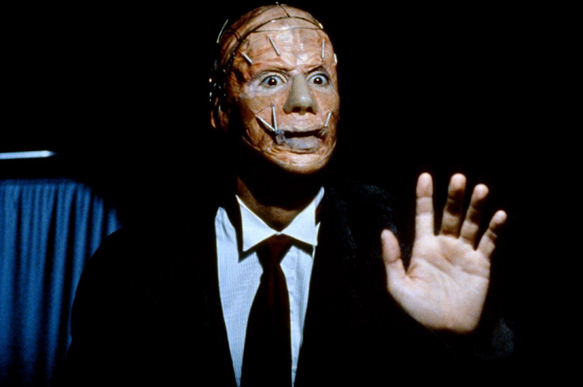 Writer Alan Ormsby was originally hired to direct the film, but was replaced after three weeks by Mark Herrier. Essentially, Ormsby directed the three films within the film and Herrier directed the main storyline. Actress Amy O’Neill (The Young and the Restless 1986, Honey, I Shrunk the Kids 1989) was also replaced after three weeks of filming by Jill Schoelen. The entire movie was filmed in 1989 from mid-October until mid-December in Kingston, Jamaica. The Dreamland Theater featured in the film is The Ward Theatre in Kingston. Due to the moving filming in Jamaica, a Reggae band is seen playing outside The Dreamland Theater. The film received poor box office numbers and reviews upon its release, but has achieved cult status with fans.

College student Maggie has reoccurring nightmares of a girl named Sarah, who is fleeing a deranged man while in a fire. She uses her dream as inspiration for a film that she begins to write. When the film department at the university lacks recognition for needed funding, fellow student Toby pitches an idea to host an all-night Horror festival in The Dreamland Theater. The festival will show three films, all with gimmicks to entertain the customers. The 3D film Mosquito features a colossal fake mosquito that flies out at the theater audience. The Attack of the Amazing Electrified Man features shock buzzers in seats, or “Shock-o-Scope.” During the Japanese film The Stench, odors were released into the air through gases at appropriate times, or “Odorama.” 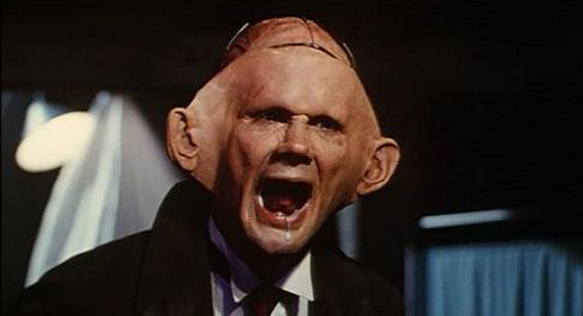 As the students search for props to use, they discover a film called Possessor. Upon watching, Maggie is shocked to see that it is just like her dream. Possessor features a man named Lanyard Gates, who actually kills his family on the stage, in front of an audience, and then sets the building on fire. Maggie starts searching for a reason for why she would dream this horrible incident.

The night of the event, Maggie sees a man she believes is Gates enter the theater. He even calls her Sarah, the girl from her dream. She chases after him, but loses him in the crowd. As the festivities begin, someone begins stalking and killing the film students and professor, one by one. Most of the death scenes are over-the-top and utilize props from the featured movies, including electrocution and the mosquito stinger. Maggie soon realizes that she is Sarah from her dreams, Gates’ daughter, and one of the few who survived the fire. It is revealed that classmate Toby was also there as a boy in the audience. He was badly burned and lost his family in the fire. He hides his disfigurement by constructing facial masks of his victims and wears them so well that he is able to pass as that person. He holds Sarah/Maggie responsible for Gates’ actions and plans to reenact Possessor on stage. The crowd goes wild as he sets up the scene, believing it is part of the show. At the last minute, classmate and fellow survivor, Mark, swings down with the mosquito’s giant stinger and stabs Toby as the audience continues to cheer. 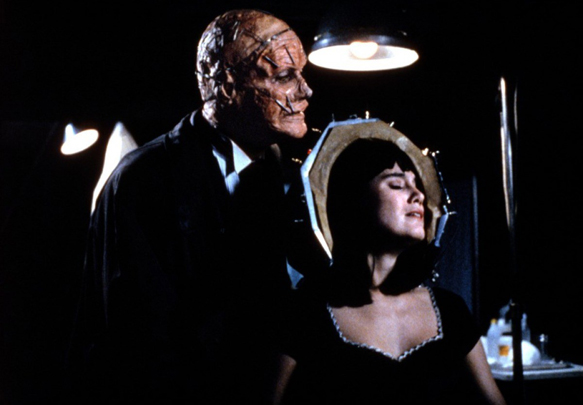 While switching of masks and passing as the victim is completely outrageous, the makeup and effects were surprisingly well done. The movie stays on the lighter side and bypasses gore, but the crew did well on Toby’s burned face. The story itself is a by-the-books Slasher, but the creative use of props and the movies within the movie sets Popcorn apart from the rest. The on-screen audience brings a lot of energy to the film as they scream and laugh while dressed in Comic Con style outfits. Some of the scenes are reminiscent to the Scream series, although the films have never been officially linked. Of course, the movie does have its flaws, but somehow it only makes Popcorn even more charming. There has been talk of a documentary, complete with the original cast, for a few years. One can only hope that the film finds its way so that fans of the cult classic can enjoy. 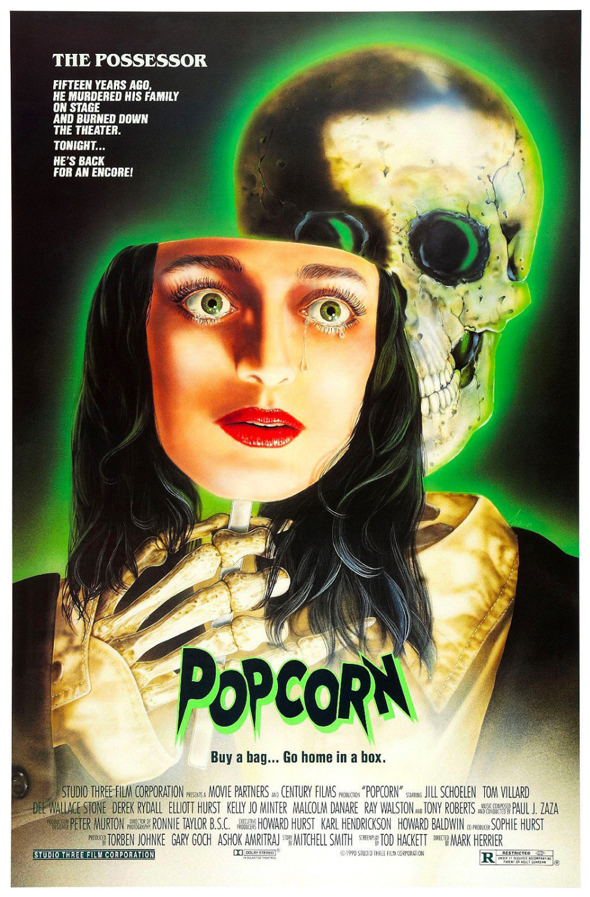 Purchase Popcorn on DVD on Amazon