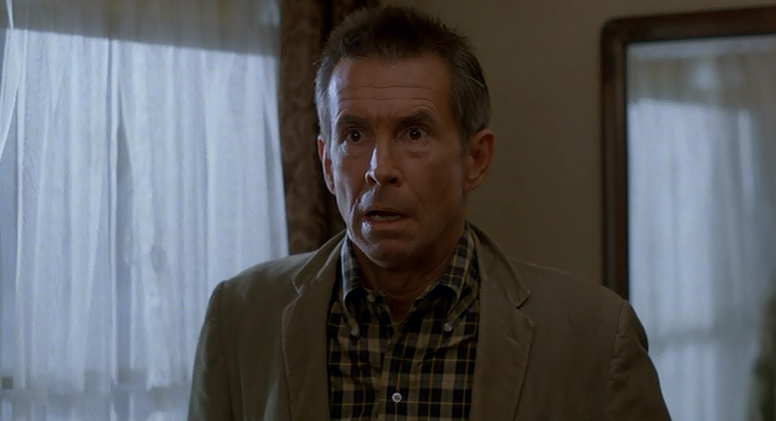 The film begins one month after the conclusion of Psycho II (1983), with Norman once again manning the desk at the Bates Motel. In lieu of Norma Bates’ body, our friendly neighborhood psycho killer now lives with the mummified remains of his newly discovered birth mother, Emma Spool (Claudia Bryar). As local cops discuss the search for the elderly Miss Spool at Statler’s Diner, Norman shows up, much to the excitement of journalist Tracy Venable (Maxwell), who is writing an article about convicted serial killers being let back out into society. Naïve Norman opens up to her until he is shocked to see Marion Crane look-alike Maureen Coyle (Scarwid) enter the establishment. Noticing the initials M.C. on her suitcase seals the flashback deal for deluded Norman, and he runs out of the diner. Maureen comes in, asking about a room, but unfortunately for her, not only is she a nun on the run from her lack of faith, but sleazeball musician/Bates Hotel assistant manager Duane Duke (Fahey) also happens to be the man who tried to rape her the night before when she was hitchhiking. Having nowhere else to go, Maureen takes Cabin One.

Meanwhile, Norman is convinced that Maureen is Marion, even though “Mother” insists that the dead do not come back. When “Mother” decides to take Maureen out as she showers, she finds the girl in the tub, bleeding from her own sliced wrists. This deviation breaks the spell for Norman, who brings her to the hospital, an act that ignites a romance between the two. “Mother,” of course, will not be satisfied until she has drawn blood, and kills Duane’s one night stand, Red (Juliette Cummins), and Patsy Boyle (Katt Shea), the only sober guest at a motel room football party. As Norman gets closer to Maureen, he panics about his apparently renewed loss of sanity when he finds Patsy’s body and ends up hiding her in the motel’s ice chest. In the chaos, Norman realizes “Mother” is missing.

Still causing trouble for Norman, Tracy finds clues that link Miss Spool to the Bates Motel, and hunts down the previous owner of Statler’s Diner, nursing home resident Harvey Leach (Huge Stanger), who exposits that Miss Spool was once institutionalized for murder before she worked for him as a waitress. When she tells Maureen about Norman’s past, the flighty nun runs to her caretaker, Father Brian (Gary Bayer). With Maureen temporarily out of the picture, Norman searches for “Mother” and finds a note from her stating that she is waiting for him in Cabin Twelve. Not only does he find “Mother” there, but he also finds Duane, who took “Mother” and tries to blackmail Norman. They fight and Norman hits Duane over the head with an ashtray and his own guitar, apparently killing him. 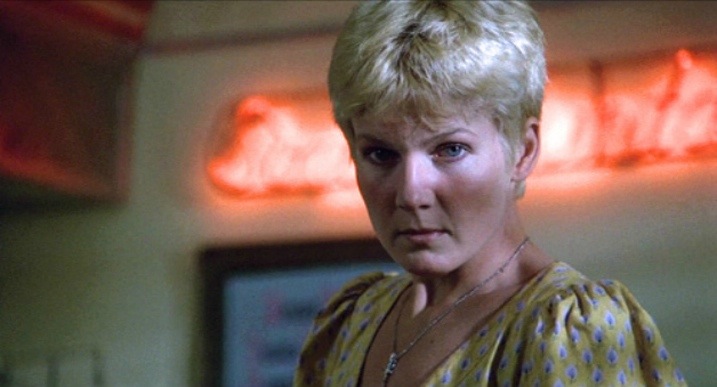 Cleaning up his mess, Norman loads Duane’s car with the musician and Patsy’s bodies. Unbeknownst to him, Duane is still alive, and they scuffle once again. Norman escapes from the car just as it goes off the road and sinks into a murky swamp, taking Duane and the dead Patsy along with it. In the meantime, Maureen convinces herself that Norman is her true love and returns to the motel. Their reunion is sweet until “Mother” shouts at Norman. So like the fragile birds he likes to stuff, poor, startled Maureen falls down the stairs to her death, ironically impaled by the Cupid statue. “Mother” has now crossed a line and Norman cannot forgive her.

When Tracy arrives, she finds the dead Maureen and Norman dressed as knife-bearing “Mother.” In an attempt to save her skin, Tracy tells Norman about his history: Emma Spool actually was his aunt and was in love with Norman’s father, but he married her sister, Norma, instead. She then killed Mr. Bates and kidnapped baby Norman, considering him the child she was meant to have with her beloved. Once she was caught, Norman was sent back to his real mother and his aunt was institutionalized. As she speaks, Tracy stumbles across the dead Miss Spool. Norman hears her order him to kill Tracy, but instead he attacks the dead woman, dismembering her mummified remains.

When the police arrive to take Norman back to the asylum once again, he insists that although he may remain locked up for the rest of his life, he will finally be free of “Mother.” But going cold turkey on psychotic behavior is hard for anyone, and as he sits in the back of the cruiser, Norman smiles insanely and caresses his one remaining trophy – the severed hand of Miss Spool. 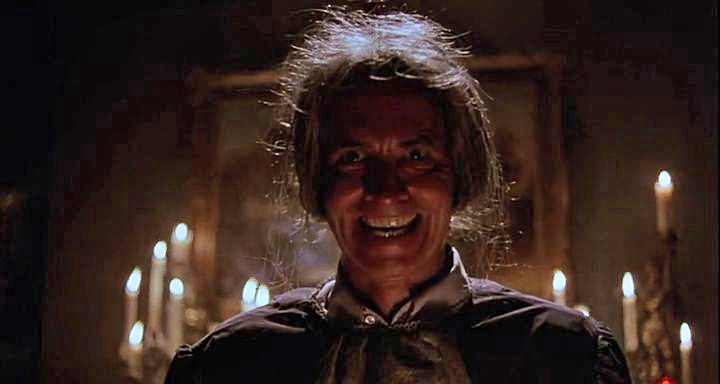 Monetarily the least successful of the Psycho franchise, Psycho III made only fourteen million dollars at the box office, more than half of what its predecessor made. Surprisingly, Roger Ebert gave the film three out of four stars, writing: “Any movie named Psycho III is going to be compared to the Hitchcock original, but Perkins isn’t an imitator. He has his own agenda. He has lived with Norman Bates all these years, and he has some ideas about him, and although the movie does not apologize for Norman, it does pity him. For the first time, I was able to see that the true horror in the Psycho movies isn’t what Norman does — but the fact that he is compelled to do it.” Perkins even managed to snag a Saturn Award nomination for Best Actor, although he lost to Jeff Goldblum’s portrayal of the tortured scientist in Cronenberg’s The Fly (1986). Seeing the antihero Norman Bates try to overcome his mental instability and fall in love was a painful yet pointless affair, as one knows that they can take the psycho out of the asylum, but you cannot take the asylum out of the psycho. 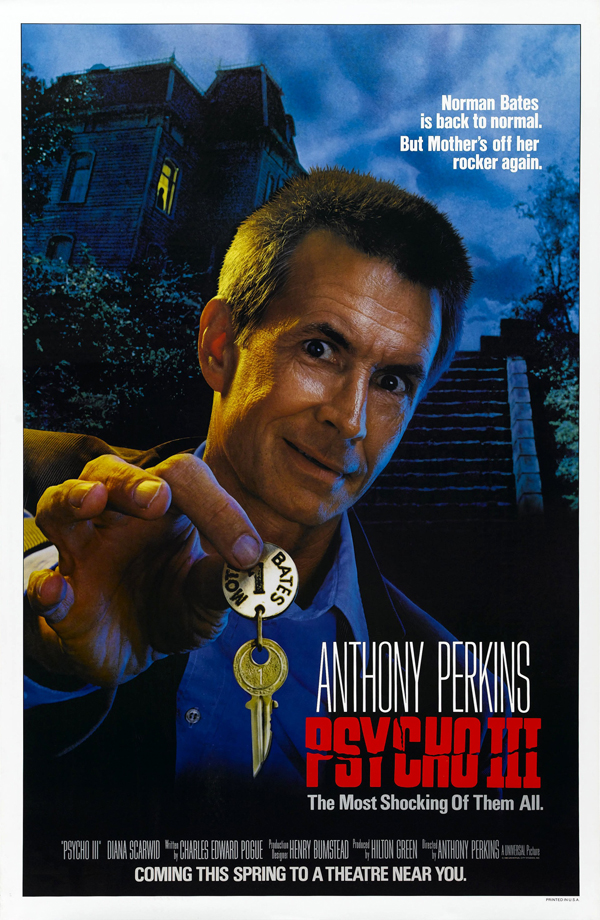