This week in Horror movie history, on October 29th of 1982, Fantasy based Q – The Winged Serpent was released in theaters. Directed, produced, and written by Larry Cohen, Q – The Winged Serpent came after his other Horror related projects such as 1974’s It’s Alive and 1985’s The Stuff. Boasting a cast including the likes of Michael Moriarty (Troll 1986), David Carradine (the Kill Bill franchise), and Richard Roundtree (Shaft 1971, Seven 1995), Q – The Winged Serpent only received a limited release via United Film Distribution Company. Earning an estimated $255,000 on a budget of approximately $1.2 million, while considered a failure at the box office, through the years, the movie has developed a cult following, making it worthy of remembering. 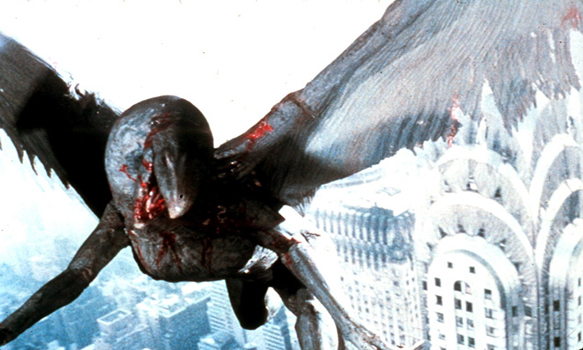 The story revolves around something killing people at random in NYC, and it is nesting in the bowels of the Chrysler building. Thanks to patsy Jimmy Quinn (Moriarty), who was running after he was involved in a jewel heist, this something comes from the sky, decapitating or completely taking people at will. Detective Shepard (Carradine) and Sgt. Powell (Roundtree) are in a race to piece clues together that might help them kill two birds with one stone in the current mystery and a previous case they were working involving apparent ritualistic killings before an apocalypse occurs from above or below.

Coming together after Cohen was let go from the set of 1982’s big budget film, I, Jury, he wanted to utilize his time in New York, so he moved forward with the Q – The Winged Serpent script; conjuring an idea of using the Aztec god, Quetzalcoatl, a hybrid reptile/bird, as the main theme of his movie-in-the-making with the idea of the Chrysler building as its nesting grounds. In fact, it is said that he had once thought the Chrysler building would be a very cool place hold a nest. With an idea born, pre-production, casting, and filming began within a week on location in New York City. 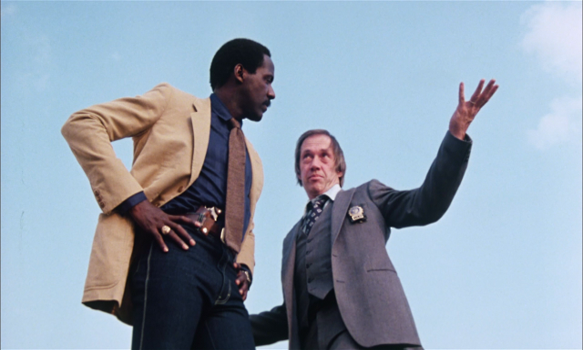 Little known actor at the time, Bruce Willis (Die Hard series), tried for the role of Shepard, but Cohen deemed it too risky to go with an unknown name. Instead, he choose to go with Carradine, even before the actor had a script in hand. Carradine played Shepard with his cool, dry delivery he gives all his roles. The same can be said for Roundtree with the exception of some tense scenes. Meanwhile, Moriarty’s Quinn is skittish or manic, depending on the situation. As Moriarty’s portrayal of Quinn, many dubbed it as the highlight of the film. That all said, the rest of the cast does surprisingly well, despite the little preparation time allotted.

The plot of Q – The Winged Serpent had an interesting premise about a god being prayed to for resurrection by modern followers. Movie going audiences saw this concept used more recently in this year’s X-Men: Apocalypse. However, Cohen chose to make this idea a reveal almost near the end of the film, which might aggravate audiences today, but is still rather genius nonetheless. All this said, Quetzalcoatl is seen in glimpses throughout the movie. Bringing the creature to life on screen with stop-motion animation was Randall William Cook (The Lord of the Rings series) and David Allen (The Howling 1981, Honey, I Shrunk the Kids 1989). In this age of technology excess, some audiences might think this effect is archaic, even if contemporary greats like Tim Burton have continued to use it. 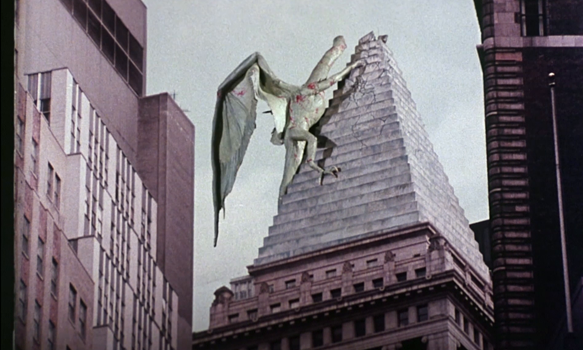 Ultimately, Q – The Winged Serpent was panned as “dreck” by one critic, and it did not fair too well with others as well. Rotten Tomatoes and IMDB have rated the movie 65% Rotten, despite having 41% liking it, and 6.1/10. Given that, Q – The Winged Serpent has remained in the public through its home video releases, the most recent being on Blu-ray in the summer of 2013 via Shout! Factory. In addition, later films and TV shows have given nods to Q – The Winged Serpent throughout the years as well; such as 1992’s Reservoir Dogs before pulling the heist, and more recently the 2011’s South Park episode “The Poor Kid.”  Showing the film still has an audience, in 2007,  Jim Wynorski  brought the winged serpent into the 21st century while directing a TV movie sequel called Cry of the Winged Serpent. No question a B-film, Q – The Winged Serpent is still fun, entertaining, and a monster delight perfect to check out on rainy afternoon. 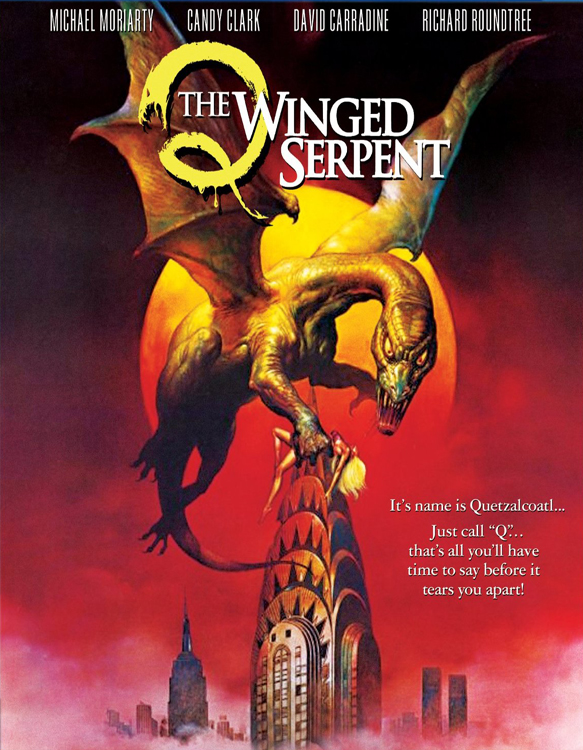 Purchase Q: The Winged Serpent on Blu-ray/DVD on Amazon