This week in Horror movie history, Silent Night, Deadly Night was released on November 9, 1984 through TriStar Pictures. Although technically directed by the late Charles E. Sellier, Jr., who was better known for his Biblical documentaries than his Horror films, the movie’s death scenes were directed by editor Michael Spence (The Boogens 1981, Summer Camp Nightmare 1987) since Sellier was so uncomfortable with the gorier bits. This Christmas massacre was produced by Ira Barmak (Mason 1977, Hotel Colonial 1987) with a score composed by Oscar nominated Perry Botkin, Jr. (Bless the Beasts & Children 1971, Mork & Mindy TV series). Michael Hickey wrote the script in a career that began and ended with Silent Night, Deadly Night. The actual special effects were created by Rick Josephsen (Cujo 1983, Fright Night Part 2 1988) while Karl Wesson (Van Helsing 2004, Pirates of the Caribbean: Dead Man’s Chest 2006) took care of the special effects makeup. 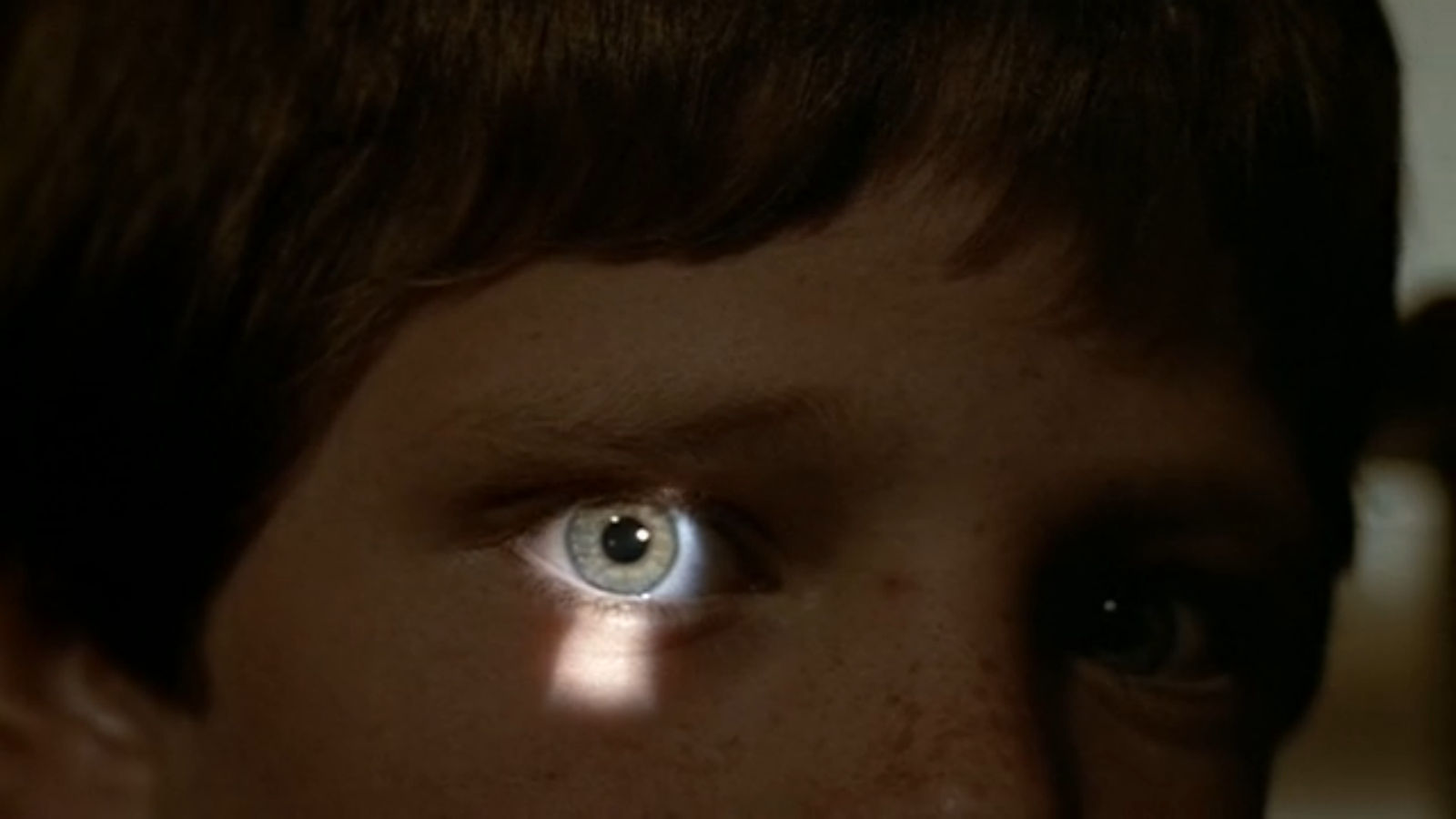 Filmed in Oyster Bay on Long Island, New York and in Heber City and Salt Lake City, Utah, the movie begins with a family of four visiting Grandpa (Will Hare) at the nursing home on Christmas Eve. When Mom (Tara Buckman) and Dad (Jeff Hansen) leave to sign some papers, Grandpa tells little Billy (Jonathan Best) about the evils of Santa Claus, planting the seed for the lifelong fear that would be set in stone later that night when the family is hailed to the side of the road by a man dressed as Santa (Charles Dierkop) who shoots Dad and attempts to rape Mom before slitting her throat, all in front of Billy and his baby brother, Ricky. The boys end up in a Catholic orphanage, where Mother Superior (Chauvin) feels no sympathy for Billy and his PTSD, and insists on the eight-year-old confronting his fear of all things Santa by forcing him to sit on the cheery elf’s lap. This, of course, backfires as Billy flashes back to the night his parents were killed, making him freak out and punch Santa in the nose before running to a corner in his room, begging not to be punished by St. Nick. 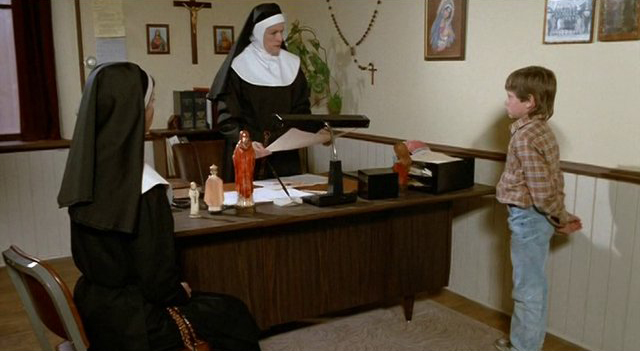 Ten years later, a kindly nun, Sister Margaret (McCormick), helps the now grownup Billy (Wilson) get a job at a toy store, where things go well for him until his boss, Mr. Sims (Leach), forces him to dress up as Santa on Christmas Eve. Poor Billy forces his way through the horrifying incident to please Sims, right up to the after hours party the boss throws, but comes completely apart when he happens upon co-worker Andy (Randy Stumpf) forcing himself onto Pamela (Nero), the girl Billy loves. The boy’s fractured psyche finally snaps and he strangles Andy with a string of Christmas lights before killing Pamela with a box cutter, insisting that “punishment is good!” When the drunk Sims hears a noise in the back of the store and investigates, Billy hacks him in the head with a hammer. Another co-worker, Mrs. Randall (Nancy Borgenicht), finds the bodies, and as soon as she realizes the killer is sweet Billy, he takes her out with an arrow to the gut. After Billy leaves the store, Sister Margaret stops by and sees the bodies, but manages to escape and get back to the orphanage in a screaming panic. Billy breaks into a house and kills teens Denise (Quigley) and Tommy (Geter) with a rack of deer antlers when he finds them having sex.

When a little girl interrupts his slaughter and asks Billy, still dressed like Santa, if she has been naughty or nice, he smiles and gives her the bloody box cutter he had used to kill Pamela. Bullies at a sledding hill feel Billy’s wrath as he decapitates one and scares the other one off with his friend’s severed head. Meanwhile, Sister Margaret has phoned the police, and together they realize the killer must be Billy and that he is making his way back to the orphanage. As the sun rises, a man dressed like Santa walks down the street toward the orphanage, but does not stop when the police warn him off, and in their haste, shoot him dead in the street. They discover that it was actually the deaf Father O’Brien, there to visit the orphans on Christmas morning. Officer Barnes (Max Robinson) goes into the basement to look for Billy, but instead finds an axe sticking out of his chest as Billy attacks. When Billy goes up to the orphanage front door, the children let him in, thinking he is the real Santa Claus, but when the now wheelchair bound Mother Superior announces, “There is no Santa Claus,” Billy answers back, “Naughty,” and raises his axe to kill her. He is stopped when Captain Richards (H.E.D. Redford) bursts through the door and shoots poor, deluded Billy in the back. To make sure he traumatizes the children just as badly as he once was, Billy looks at them and says, “You’re safe now, Santa Claus is gone,” before dying. As the children gather around, Billy’s younger brother, Ricky (Alex Burton), looks coldly at Mother Superior and whispers, “Naughty.” 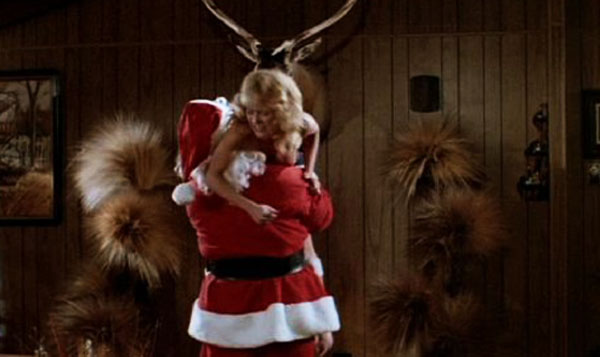 Although Silent Night, Deadly Night made more money initially than A Nightmare on Elm Street (1984), which had opened the same weekend, protests and complaints from parents picketing for the removal of a film that showed Santa Claus as an axe murderer finally pressured TriStar to pull the film, despite the fact that both Tales from the Crypt (1972) and Christmas Evil (1980) had portrayed that same type of killer. Of course, sales plummeted, and the film just missed the two and a half million dollar mark at the box office.

In an interview from the documentary Going to Pieces: The Rise and Fall of the Slasher Film in 2006, Lilyan Chauvin told interviewers that she believed a mistake had been made by focusing the film’s ad campaign on the lovable Christmas figure rather than on Billy’s mental instability, while Billy himself, actor Robert Brian Wilson, was so embarrassed by the controversy that he begged his family and friends to not watch the film. Siskel and Ebert even got in on the game, chanting, “Shame! Shame! Shame!” after each name while reading the film’s credits on the air. 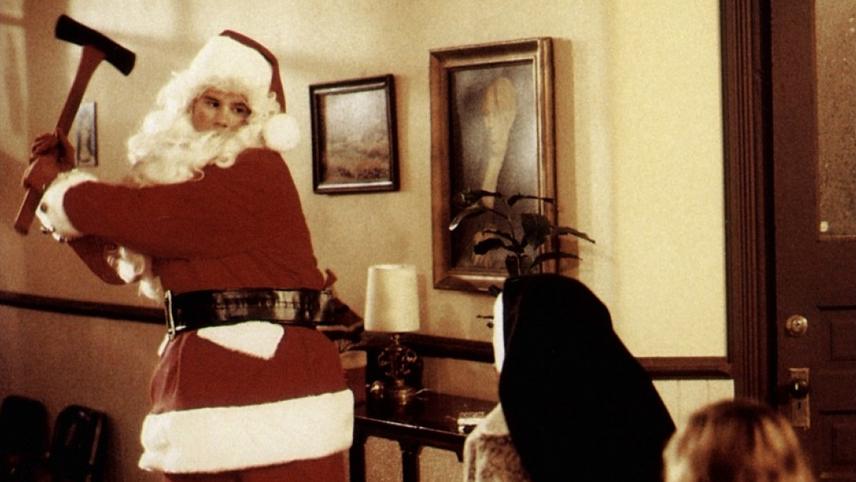 Producer Ira Barmak eventually bought back the distribution rights to the film after Tri-Star pulled the film from theaters. In current times, the film has received three separate Anchor Bay releases on DVD, once by itself, once as a double feature with sequel Silent Night, Deadly Night Part 2 (1987) in 2003, and again along with Black Christmas (1974)  in 2009. The film got the Blu-ray treatment for its thirtieth anniversary through Anchor Bay/Starz Entertainment in 2014. Silent Night, Deadly Night 2 was not the only sequel. Silent Night, Deadly Night 3: Better Watch Out! (1989), Silent Night, Deadly Night 4: Initiation (1990), and Silent Night, Deadly Night 5: The Toy Maker (1991) were also produced, although none of them had the impact that the first film received. A 2012 remake was also made under the title Silent Night, which was directed by Steven C. Miller and starred Malcolm McDowell, Jaime King, Donal Logue, Lisa Marie, and stuntman Ronald Jones, Jr. as the killer Santa. If only all of those long ago parents realized that their protests and campaigns would only strengthen the film’s stance in the genre and give it a permanent place in Horror lover’s hearts. 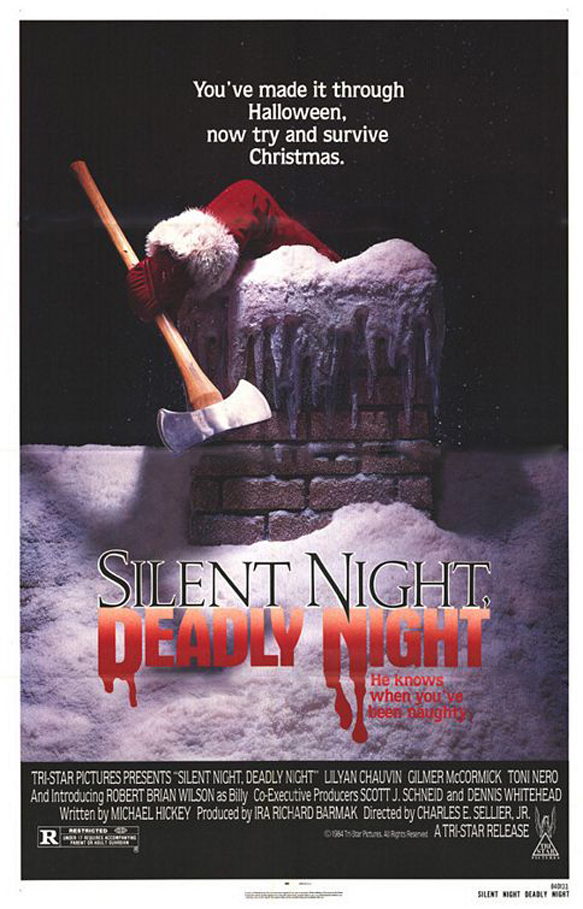