This week in Horror movie history, back on April 29, 1983, Something Wicked This Way Comes was released in the US by Walt Disney Productions and distributed by Buena Vista Distribution. The last film to carry the Walt Disney Productions label, the film stars Jason Robards (Dream A Little Dream 1989, Philadelphia 1993), Diane Ladd (Chinatown 1974, Christmas Vacation 1989), Jonathan Pryce (Pirates of the Caribbean movie series, Tomorrow Never Dies 1997), Vidal Peterson (The Thorn Birds TV series, Wizards of the Lost Kingdom 1985), Shawn Carson (The Funhouse 1981, Cry For the Strangers 1982) and Pam Grier (Foxy Brown 1974, Jackie Brown 1997). The movie was directed by Jack Clayton (The Innocents 1961, The Great Gatsby 1974) and produced by Peter Douglas (Fletch 1985, The Enemy Within 1994). Both the novel and the initial screenplay were penned by Fahrenheit 451 author Ray Bradbury. The final cut of the movie’s music was composed by James Horner (Titanic 1997, Avatar 2009), with special effects by Richard L. Hill (Fight Club 1999, Transformers 2007) and Peter Anderson (Close Encounters of the Third Kind 1977, Cocoon 1985). This dark, coming-of-age film was shot in Vermont and at Walt Disney Studios. 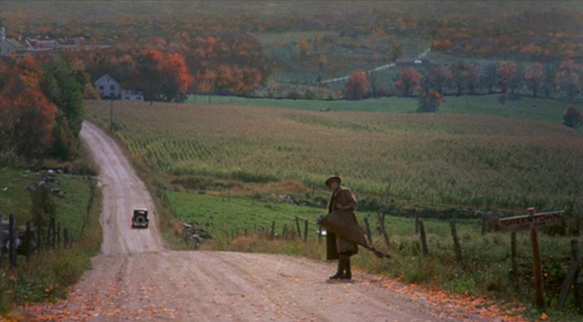 With the title coming from the final line from Macbeth Act IV scene I, Something Wicked This Way Comes starts off with an older Will Halloway (Arthur Hill) telling the story of a strange Autumn carnival that visited his hometown of Greentown, Illinois during his twelfth year. After a detention for whispering in class by the spinster teacher Miss Foley (Mary Grace Canfield), young Will (Peterson) and his best friend, the rebellious Jim Nightshade (Carson), meet Tom Fury, (Royal Dan0) a lightening rod salesman, on their way home, who warns them that a storm is coming. Assuming the storm was of the weather variety, Jim buys a rod with his single mother’s (Ladd) cookie jar money and nails it to his roof. They visit Will’s librarian father, 54-year-old Charles (Robards), and discuss Dark’s Pandemonium  and Carnival, something all three have seen advertised around town. The boys are excited by the prospect, but Charles is apprehensive. Even after seeing the entire show set up in a matter of seconds in the middle of the night, they are thrilled. They change their minds when they witness Mr. Cooger (Bruce M. Fischer) ride the supposedly broken merry-go-round backwards, an event that turns the middle-aged man back into a young boy. When notable members of their town visit the carnival and go missing after an encounter with the beautiful Dust Witch (Grier), the boys realize that people who go to this evil fair have their darkest desires met by the magic in the omnipresent Witch, leading to ironic damnations for the town. Longing for her youth, Miss Foley is now young and beautiful again, but also blind, so she cannot see her own beauty. Bar owner Ed (James Stacy) pines for his younger days of football stardom before he lost his arm and leg. He gets his appendages back but becomes a sporty youngster meant to lure other children to the dark rides. Tobacco shop owner Mr. Tetley (Jake Dengel) has the wealth he had always dreamed of, but is now part of the carnival as a cigar store Indian in the wax museum.

The Illustrated Man and owner of the carnival, evil Mr. Dark (Pryce), suspects the boys know about the wickedness that lies inside the carnival and hunts them down. Using a carnival parade to draw them out, the Dust Witch sends nightmarish tarantulas to Jim’s bedroom and then to the library, where he meets Will’s father. Playing on Charles’ desire to be young again, Mr. Dark offers to halve his age if he tells where the boys are hiding. Charles refuses, and the Dust Witch appears and gives him a taste of death. The boys escape back to the carnival, where they hide in the Mirror Maze. Charles follows them and is tortured by mirrored memories of his inability to save four-year-old Will from drowning because of his fear of the water, and also of never being forgiven by his son for this fault. Charles overcomes his fear just as Will forgives his father and smashes the mirror, stopping the vision. The final battle takes place at the merry-go-round. Jim, in his desire to be older, rides the carousel forward and almost dies when he falls off. Charles realizes that happiness is the only way to kill the despair-sucking carnival and convinces Will to act goofy, which brings Jim back. Unfortunately for Dark, he is stuck on the ride as it spins and spins, turning first into an old man and then into a corpse. With renewed happiness in their hearts, Jim, Will and his father race back to town as the sun rises. 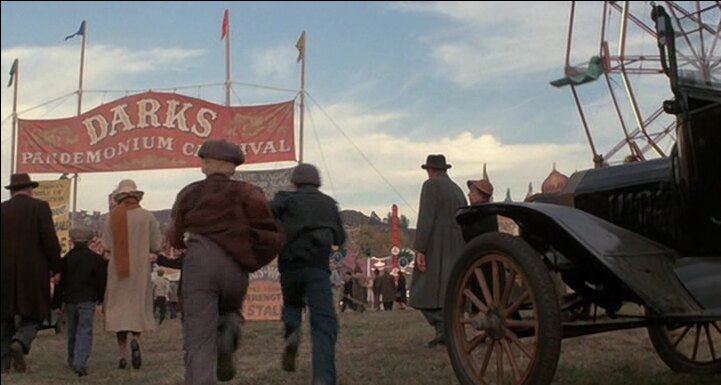 As another attempt to rid themselves of their goody-goody image, Disney chose Bradbury’s short story for its dark undertones and ability to frighten. Like Watcher in the Woods (1980), however, Disney Studios thought the resulting film was too dark and objected to the final result. There were two visions for the film, with Bradbury wishing to stay as faithful to the novel as possible, and director Clayton wanting to make a more accessible and family friendly film. The studio also thought the film was both too dark and too silly, and had the film pulled and some scenes reshot with an uncredited director, including a hokey giant mechanical hand attack that had originally been shot in Jim Nightshade’s bedroom, now replaced by the tarantula attack sequence. Because of the time lapse between the shoots, the boys are noticeably older during this scene. The opening credits were also reshot, taking out the CGI animation (the first attempt ever on film) of the carnival being formed by the train smoke and replacing it with the lone train chugging through the night to Greentown. The score was recomposed from George Delerue’s somber notes to a the lighter music by Horner. The only things these changes served were to make this movie unmarketable – too scary for children and too childish for adults. The result was a box office bomb where the movie did not even make back half of its budget. 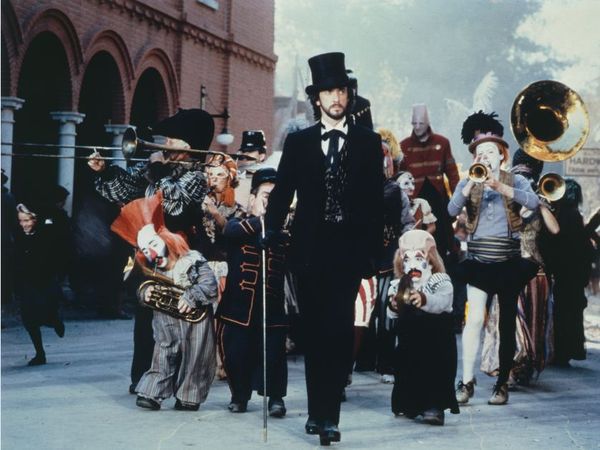 When Anchor Bay distributed the DVD in 1999, the end of the theatrical trailer had been cropped and its aspect ratio being changed from 1.85:1 to 2.35:1, causing some confusion among fans. This was because Disney wanted its name completely removed from the DVD and its packaging. Disney themselves released the DVD in 2004, but like the Anchor Bay release, there are no extras other than the trailer. The 1996 Laserdisc had contained audio commentary from Bradbury himself, but that has not been included in any of the DVD releases. The film won the 1984 Saturn Award for Best Fantasy Film and Saturn Award for Best Writing and was nominated for five other awards, including Best Music for James Horner and Best Supporting Actor for Jonathan Pryce. The film was also nominated for the Hugo Award for Best Dramatic Presentation and Grand Jury Prize at the Avoriaz Fantastic Film Festival. It also holds a 60% rating on Rotten Tomatoes, showing that while the original release did not hold much water with fans, it has grown on Horror lovers as time has gone on.

Deadline.com has announced a remake of Something Wicked This Way Comes with Abraham Lincoln: Vampire Slayer’s Seth Grahame-Smith directing and writing the script. Producing the film would be Grahame-Smith and the Stephen King’s IT remake’s David Katzenberg with their company KatzSmith Productions. Grahame-Smith has said that he wants to make a film more true to Bradbury’s novel. Hopefully this time, Disney will not be involved to spoil all of the sinister goodness to come. 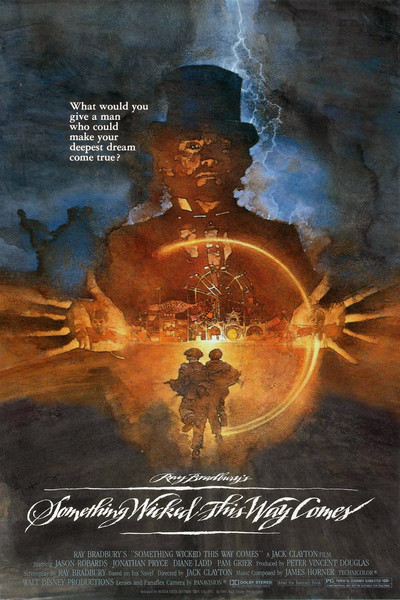 Purchase Something Wicked This Way Comes on DVD on Amazon