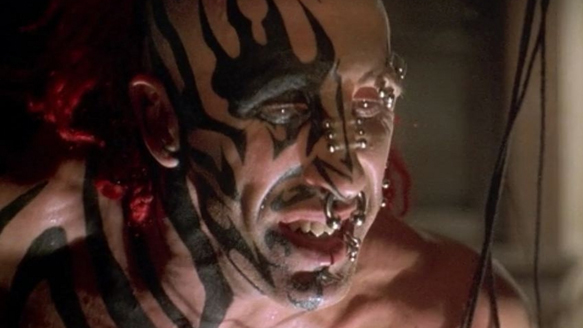 Snider obviously has a love for horror films based on the nods he gives to some of the classics in Strangeland. Not only did the original Freddy Krueger take part in this film, but Snider also incorporated the famous line, “What a rush!” from A Nightmare on Elm Street 3: Dream Warrior (1987) and made reference to the A Nightmare on Elm Street franchise itself with the line, “First you dream, then you die.” There is even a plug for The Exorcist’s (1973) Captain Howdy, which was the name of the spirit Reagan talked to through the Ouija board. He also incorporated his love for music by compiling an awesome soundtrack, on top of the score by Anton Sanko (The Possession 2012) with songs from such as Anthrax, Sevendust, Megadeth, Marilyn Manson and Eminem, which does wonders to setting the mood in Captain Howdy’s lair. 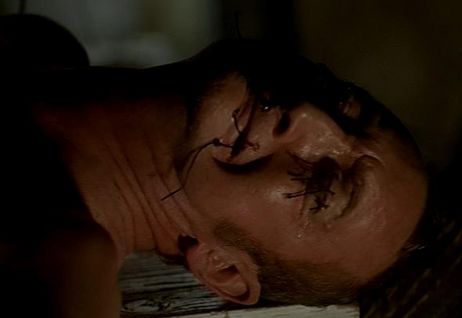 The ultimate internet safety video, Strangeland starts off with Genevieve Gage (Cardellini) and her friend Tiana (Amal Rhoe) chatting online with random strangers. They meet Captain Howdy, a cool guy who likes keggers and snowboarding, and after a minute long correspondence, decide to go to a party at the Captain’s house. When neither of them return home, Genevieve’s mom, Toni (Elizabeth Pena) is worried, but Homicide detective dad Mike Gage (Kevin Gage) is too involved in his current police case to give the matter much thought. It is not until he finds Tiana in the trunk of her own car and submerged at the bottom of the lake that he really starts to worry. Along with the girl, they find a septum piercing the size of  a human pinky finger. After getting a lesson about piercings, scarification and other such body modifications from a local tow truck driver, Gage  and his partner pay a visit to Xibalba, the local Bod Mod club. They find nothing but loud music, tattoos and day-glo skin. Back at the station, Gage investigates the last website his daughter visited, and after some help from his niece on the Ways of the Internet, makes a fake teenage girl profile and trolls her last contact – Captain Howdy himself. Gage gets himself an invite to one of the captain’s keggers, and with the SWAT Team busts in, only to find a little old couple in the middle of private bedroom activities. The next day, Gage gets a PM calling him out as a cop, but a synchronized barking dog points him to the house right next door to where the Detective is parked. He breaks in and finds not only Genevieve but a bunch of other teens – tied up, strapped down or caged in, all of their lips sewn shut and pierced in uncomfortable places. He also sees the Captain in his tattooed, pierced, mohawked glory, all the while waxing philosophical about the need for more pain and pleasure in society. They fight, but Gage comes out on top. Off to jail with you, Mr. Howdy! A newspaper montage tells the audience that Captain Howdy is really Carlton Hendricks, and an insanity plea gets him sent to an insane asylum rather than jail. The meds work, and he is back out on the streets after only four years as docile Carlton, the cardigan wearing milquetoast. His old neighbors do not believe in reformation, and when Jackson Roth’s (Robert Englund) daughter, Kelly, misses curfew, he gets a bunch of his redneck buddies together and they storm Hendrick’s house lynching the poor bastard in the rain. Strangely, Roth never asks Hendricks where his daughter is being held before offing him.  Kelly Roth ends up coming home, the wet lynching rope breaks, and after his near-death experience, Hendricks is once again Captain Howdy. He goes on a revenge rampage, seducing Roth with his dead wife’s corpse, then knocking him out and bringing him and a bunch of other lynchers back to his candlelit cellar, where he sews their facial orifices closed using his unending supply of sharpened hooks and metal rods to torture all who have wronged him. Once again, he is going on about the joys of sadomasochism.  Howdy contacts Detective Gage via the computer webcam and shows him that Genevieve is once again in his clutches. Coincidentally, some random cops are investigating a disturbance call and find Howdy’s new torture chamber, filled with lynch mob patrons and poor Genevieve, but no Captain Howdy. A Xibalba matchbook with a note to Gage is left in plain sight, so the Detective speeds on down to the club. He can hear Howdy but cannot see him. Taunting the psychopath, Gage gets Howdy to come out and fight him, where a short scuffle ends with Howdy hanging from a metal hook in the ceiling and Gage lighting him up like a Fourth of July firework. As the building goes up in flames, Detective Gage decides that family is now more important than his job, and goes to visit his daughter in the hospital and the film ends. 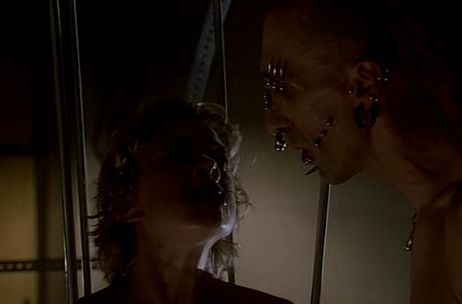 Strangeland was a movie well ahead of its time, coming out before torture porn was even considered a sub-genre. This film may also be the only one glorifying the tribal arts of piercing, scarification and tattooing, and using these practices as sexual gratification.  Captain Howdy may be the Poster Child for why suburban nine-to-fivers think such extreme body modification is a perversion. Strangeland was an excellent first effort for Snider and many have wanted to see a follow-up film. The subject is unique, the torture believable and his soliloquies on the evils of our vanilla society are quite interesting. Also, those who have been clamoring to see Twisted Sister frontman ripped, pierced and tattooed should pick this one up. What a rush! 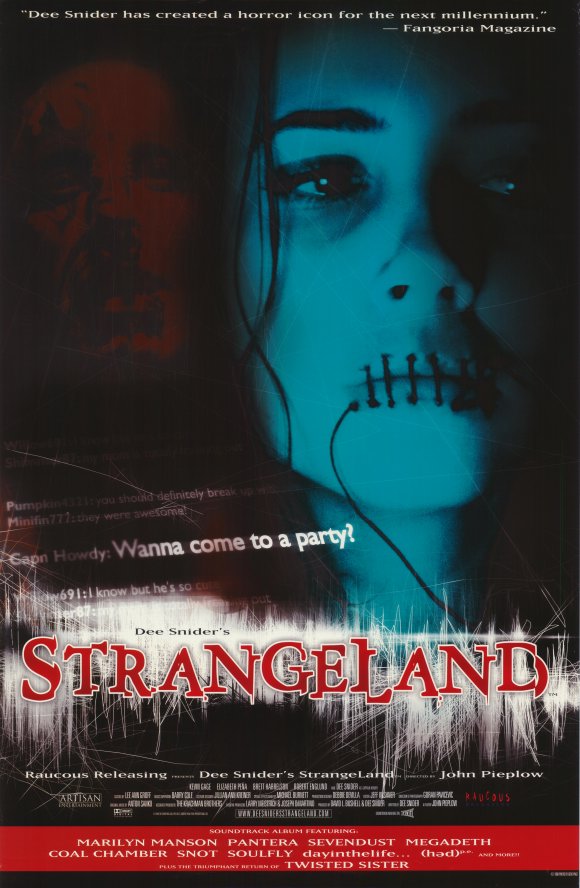