This Week in Horror Movie History – The Beast Within (1982)

This week in Horror movie history, on February 12th, 1982, MGM/UA Entertainment unleashed The Beast Within in theaters across the USA. With a cast that included some veteran actors and actresses such as Ronny Cox (Deliverance 1972, Robocop 1987), the late Bibi Besch (Victory at Entebbe 1976, Star Trek II: The Wrath of Kahn 1982), and the late R.G. Armstrong (Garden of Eden 1954, The Waking 2001), The Beast Within was unfortunately not received well by critics during its initial limited release on an estimated five-hundred fifty screens. Although, it did earn approximately $1.25 million on the opening weekend, ranking it number 10 at the Box Office alongside films such as top films in their eleventh and fourteenth weekends. Regardless of what critics say, over the last thirty-four years, the film has gained cult status as well as undoubtedly having influenced future films.

Caroline and Eli MacCleary (Besch and Cox) are going on their honeymoon when they have an accident just after the Nioba, Mississippi line.  While Eli walks back to get a tow, something lures Caroline out, and rapes her. Seventeen years later, life has settled into a routine for Caroline and Eli, now in Jersey, with their teenage son, Michael (Paul Clemens: The Passage 1979, The Sound of Spying 2014).  Suddenly, Michael becomes deathly sick, which forces them to deal with Caroline’s rape.  At different times, Caroline, Eli, and Michael, escaping the hospital, go back to Nioba to try to find answers for Michael’s illness, but as Michael gets closer, his demeanor changes.  What dark force is at play here, and can Michael’s parents solve the mystery before it is too late?

After Producer Harvey Bernhard (The Mack 1973, Damien: Omen II 1978) bought the rights to Edward Levy’s novel of the same name, UA tapped Director Philippe Mora (Swastika 1973, Mad Dog Morgan 1976) to direct while Bernhard and Gabriel Katzka (Who’ll Stop the Rain 1978, The Falcon and the Snowman 1985) produced from a script by first-time Film Writer Tom Holland (Psycho II 1983, Fright Night 1985) and an uncredited Danilo Bach (Beverly Hills Cop franchise 1984-1994, 14 Hours 2005) with the late, great Les Baxter (I Escaped from Devil’s Island 1973, Born Again 1978) doing the music.  The Beast Within would be Baxter’s final film musical score, and it is considered his best work by many fans.

The production was fraught with one mishap unfortunately. Once the film was made, the UA suits made Mora and Editors Robert Brown (Damien: Omen II 1978, Iowa 2005) and Bert Lovitt (Amazon Women on the Moon 1987, Gangster’s Paradise: Jerusalema 2008) cut key scenes that would have made certain parts of the movie make more sense.  Finally, the lack of screens the film was released on hurt the movie’s receipts.  However, it has been stated, Mora’s belief is the edits are to blame for the universal critic negativity.

Furthermore, despite being panned by critics and given a 14% “fresh” rating on Rotten Tomatoes website, The Beast Within earned approximately $7.7 million on a estimated $5 million budget.  Regardless, The Beast Within has stayed in the public eye with references in a handful of movies throughout the years, such as 1984’s Repo Man, 1987’s The Howling III: The Marsupials with a poster over a character’s head, and the 1993 episode of Quantum Leap: “The Beast Within – November 6, 1972,” and the documentaries of 2006’s Halloween: 25 Years of Terror, which mentions it in the magazine The Beast, and 2013’s Rewind This!, when a video case is shown as well as the film’s own “making of” documentary.

The Blu-ray edition of the film was released by Scream Factory December 17th, 2013, assuring The Beast Within is still available for the modern generation to take a look at. Above all, most notably, The Beast Within has the distinction of being one of the first films to use air-bladder special effects headed by Thomas R. Burman (The Thing with Two Heads 1972, The Quiet 2005) for transformations. So anytime a creature transformation is seen on on the silver screen, viewers can think of The Beast Within as a historic first, thus making the film a worthy part of Horror history. 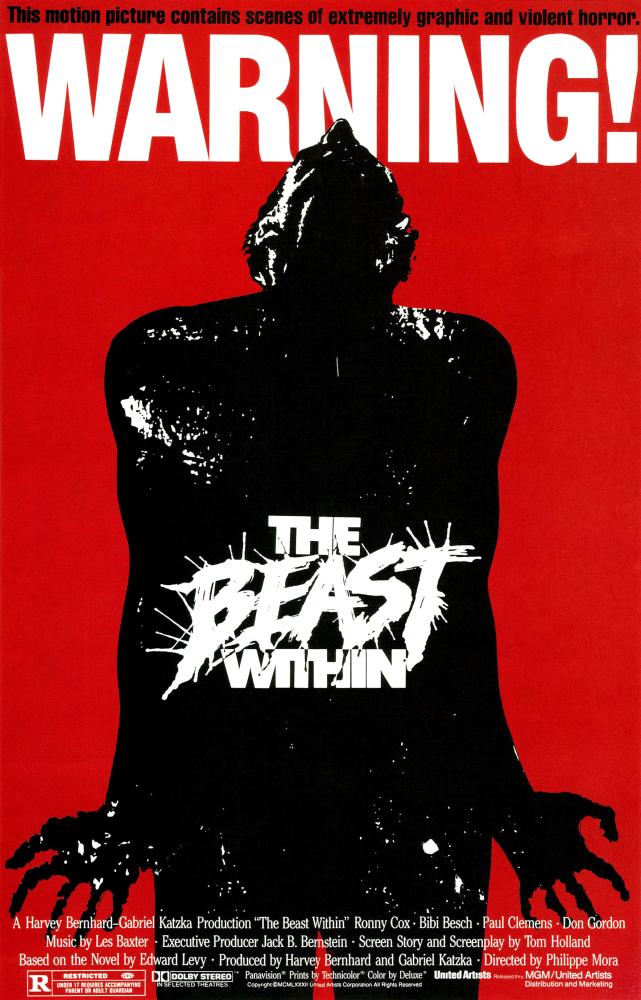 Purchase The Beast Within on Blu-ray/DVD on Amazon