This week in Horror movie history back on January 21st in 1983, college campus Slasher The House on Sorority Row was released by VAE Productions. While kickstarting careers for actors Harley Jane Kozack (When Harry Met Sally 1989, Arachnophobia 1990), Kate McNeil (As The World Turns 1981-1984, Monkey Shines 1988), Lois Kelso Hunt (Homicide: Life on the Street 1995, Head of State 2003), and Eileen Davidson (The Young and the Restless 1984-2014, Days of Our Lives 1993-2014), The House on Sorority Row was the only role for others, including Jodie Draigie, Ellen Dorsher, Robin Meloy, Christopher Lawrence, and Michael Kuhn. Mark Rosman (The Invader 1997, Sorority Row 2009) was a one man band behind The House on Sorority Row, taking on the jobs of writer, producer, and director, and even made a cameo appearance as one of the party guests. Richard Brand (Re-Animator 1985, From Beyond 1986) composed the score that was performed by the London Philharmonic Orchestra, while Rob. E. Holland (Mother’s Day 1980, Madman 1982) took on the special effects. Filmed in Baltimore in the summer of 1981, the building used for the sorority house was a converted mansion where Rosman actually stayed during filming, although the bathroom scenes were shot at the Baltimore School of Dentistry. Also known as House of Evil and Seven Sisters, the set was even visited by filmmaker John Waters one morning. Rosman did not consider Hunt’s voice to be a “scary” enough voice for the role of the crotchety Mrs. Slater, so her performance was entirely dubbed post-filming. 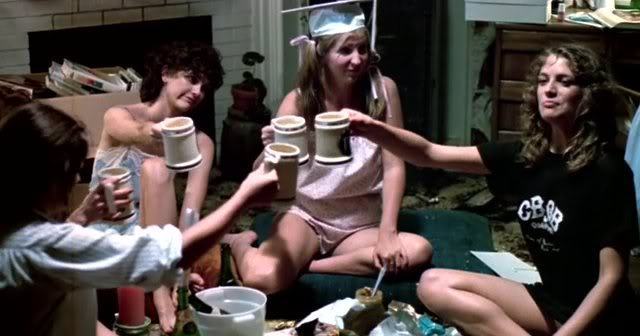 Still from “The House on Sorority Row“

The movie begins with a flashback to June 19, 1961, where a young woman is screaming from her bed, her body in active labor. When Dr. Beck (Lawrence) arrives, he says there is nothing he can do. She screams. Fast forward to present time, where a group of seven girls are planning a graduation party at their closed-for-the-summer sorority house. The housemother, the disgruntled Mrs. Slater (Hunt), tells the girls to cancel their party. They insist that she cannot keep them away, and they plan the celebration anyway. Wild child Vicky (Davidson) brings her boyfriend back to what she thinks is an empty house for a quick romp in her waterbed, but Mrs. Slater catches them and pops the bed with her sharp, bird shaped cane. Vicky decides she wants to get the housemother back, and convinces moral Kate (McNeil), ditzy Morgan (Draigie), headstrong Stevie (Dorsher), rich Liz (Janis Ward), mousy Jeanie (Meloy) and brash Diane (Kozak) to join in. The girls steal the old woman’s offending cane and float it out into the green water of the dirty pool, and when Mrs. Slater angrily refuses to retrieve it, Vicky points her boyfriend’s gun at the shocked housemother and forces her out into the murky depths. When the drippy Mrs. Slater attacks Vicky with her cane, Vicky pulls the trigger and takes the old lady out. The band and caterer arrive for the party, so the girls panic and drop the now wrapped body of their housemother into the pool to deal with later. The party kicks off, and everyone is having a great time except the seven accomplices. Kate’s blind date, Peter (Kuhn), tries hard with the distracted girl. Out back, the first murder occurs when a partygoer wanders around in the bushes and gets stabbed in the throat with the cane. Attempting to stop Jeanie from being tossed in the pool, the girls realize that a flick of the pool lights will reveal what is hiding at the bottom of the opaque tomb, so they send Stevie to shut the power to them off in the basement, where she gets killed offscreen. Another pool scare makes the girls realize that there is, in fact, no body in the water. They assume Mrs. Slater is still alive. Everyone but Kate decides to hunt her down. Morgan is sent to pack the old woman’s clothes to make it look as if she has left, and as she is standing in the closet, a body falls out of the attic. Later, Morgan goes to her room and changes into pajamas, where she is stabbed through the stomach with the cane. The four remaining girls load Mrs. Slater’s body into a dumpster and push it down the driveway to Diane’s waiting van. Diane gets killed by the cane through the open sunroof, but is gone when Liz and Vicky arrive to bring Mrs. Slater’s body to an old cemetery. 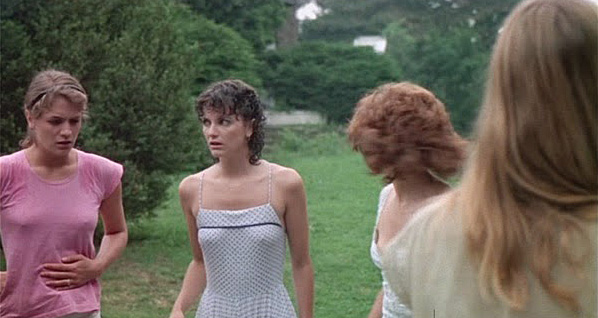 Still from “The House on Sorority Row”

Meanwhile, Kate has gone up into the attic and finds a birthday card to someone named Eric, some toys, a dead bird in a cage and an adult sized clown costume. Downstairs, Jeanie gets attacked. When Kate goes to get help, Jeanie arms herself with a knife just as the killer breaks into the house. She hides in the communal bathroom and actually gets offensive with the killer before she is shoved back into the stall. Katie finds a medical alert tag and calls the number for help, reaching Dr. Beck. He arrives and exposits that twenty four years previous, he had helped Mrs. Slater get pregnant with an experimental drug, resulting in a traumatic delivery and malformed stillbirth. The toys and gifts in the attic are all her way of celebrating the baby boy that she had lost. They realize that this episode, combined with being shot by her charges, has caused a psychotic break in the housemother, instigating her to kill Stevie and hide her body in the attic. Thinking the two remaining girls have Stevie’s body and not Mrs. Slaters’s, Kate and Beck rush to the cemetery, only to find her friend’s dead bodies at the graveyard. They also see that the original dead body is, in fact, Mrs. Slater. Beck injects Kate with a tranquilizer and uses her, the remaining girl, back to the house as bait to catch Eric. He finally admits that the baby was deformed but not stillborn, and that Mrs. Slater had taken him from the Doctor’s clinic every summer to live in the sorority house. He must have watched his mother’s murder from the attic window and was taking his revenge on the people that he knew had caused it. Beck waits for Eric. Unfortunately, the first person to walk into the room is Peter, who gets tranquilized by the Doctor. Eric attacks Beck and stabs him in the eye with the cane as the escaping Kate finds Jeanie’s decapitated head in a toilet. A final showdown with Kate and Eric (Charles Serio) ends with the killer, now dressed in his clown suit, gets distracted by one of his toys. Kate rips off a doll’s head and stabs him with the metal spike inside its neck. Eric falls through the attic trap door. She thinks he is dead, but his eyes open… 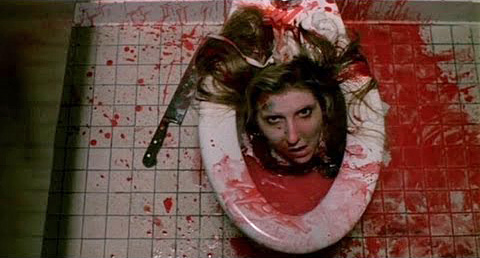 Still from “The House on Sorority Row”

There were two alternate ending ideas for this film: the first was to have Kate being pushed through the hospital in a wheelchair by the orderly Eric, and the second had police finding a clown suited dead Kate in the pool, revealing her to be the killer. The movie was remade in 2009 as Sorority Row by director Stewart Hendler, with the screenplay being written by co-producer Rosman. Selected by Quentin Tarantino for the First Quentin Tarantino Film Fest in Austin, Texas, 1996, The House on Sorority Row was initially released on DVD by Elite Entertainment on November 14th, 2000, but received a two-disc special edition Blu-Ray release in 2014. 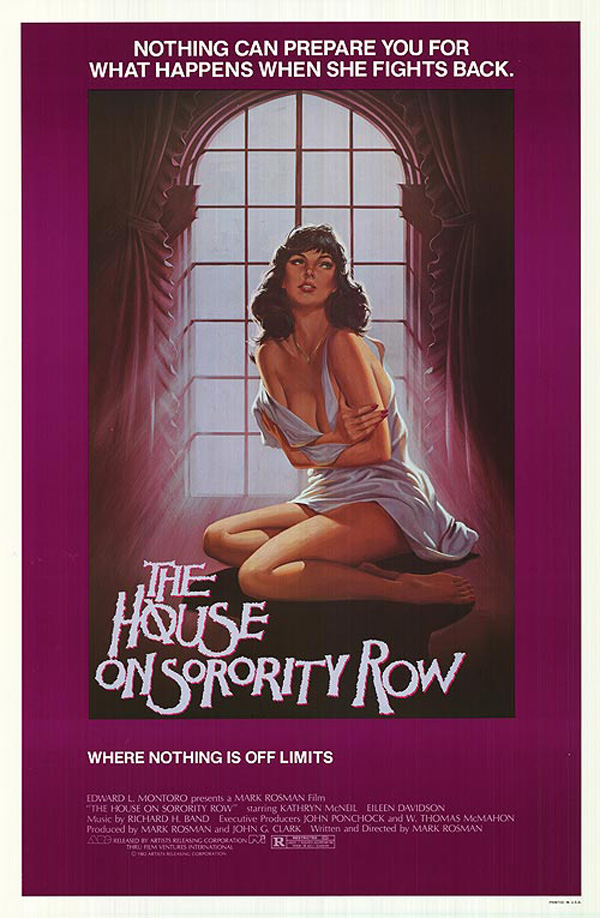