This week in Horror movie history, on January 18th, 1985, Columbia Pictures release Psychological Horror movie The New Kids in theaters across the USA. With a cast that included Lori Loughlin (Rad 1986, Full House series), Shannon Presby (Crazy Times 1981, Five Mile Creek series), and James Spader (Wall Street 1987, Boston Legal series), The New Kids, known as Striking Back in the UK market, was directed by Sean S. Cunningham (Friday the 13th 1980, House 1986), who also co-produced it with Barbara De Fina (The Last Temptation of Christ 1988, Cape Fear 1991) and Andrew Fogelson (Blue Thunder 1983, Just One of the Guys 1985) from a script co-written by Stephen Gyllenhaal (Losing Isaiah 1995, Homegrown 1998) and Brian Taggert (Poltergeist III 1988, Omen IV: The Awakening 1991). Released in a reported one-hundred twenty screens in the USA, The New Kids failed to follow in Friday the 13th’s success, however,  it has since gained a cult following thirty-one years later. 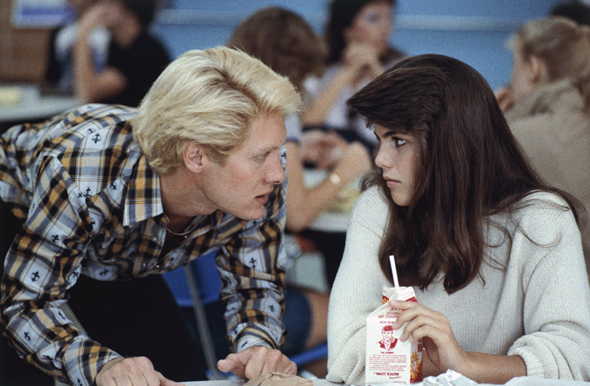 Siblings Abbey (Laughlin) and Loren McWilliams (Presby) are taken in by their Aunt Fay (Lucy Martin: Cops and Robbers 1973, Law & Order series) and Uncle Charlie (Eddie Jones: Sneakers 1992, Lois & Clark: The New Adventures of Superman series) after their parents’ deaths (Jean De Baer: The Man Without a Face 1993, Maverick 1994 and Tom Atkins: Halloween III: Season of the Witch 1982, Night of The Creeps 1986).  When Abbey raises the ire of a bleach blond Eddie Dutra (Spader), he and his cronies – Gideon (John Philbin: Return of the Living Dead 1985, Tombstone 1993), Moonie (David H. MacDonald: Joy of Sex 1984), Gordo (Theron Montgomery: Walls of Glass 1985), and Joe Bob (Vince Grant: The Rapture 1991, Taking Lives 2004) – make the new kids’ lives hell.  Will they be able to overcome this terror? With one of the movie’s taglines being, “The kids learned three things about Southern hospitality; blood, sweat and terror,” and the film shot on location in and around rural Homestead, Florida, there is a sense that if Abbey and Loren went missing, they could drop off the face of the Earth, and nobody would be any the wiser since they are new to the area when Dutra and his gang start messing with them. 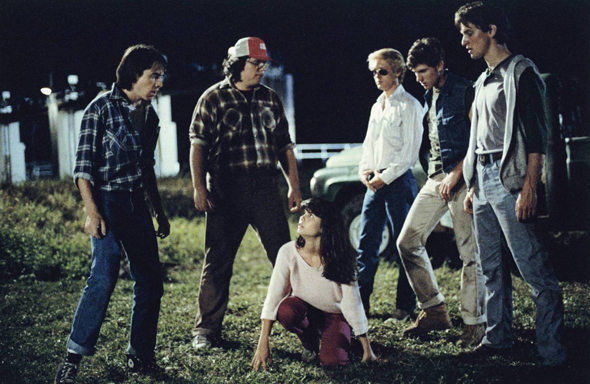 As the standard was set with Friday the 13th, Cunningham’s “go to” subject matter of teenage kids on the wrong side of someone’s revenge is the basis for The New Kids.  Cunningham has perfected this scenario in his directing. In contrast, unlike the exploitative storyline of Friday the 13th with its teen sex inattentive storyline, The New Kids plays it straight like any news story about teen tiffs that turn bad as a revenge-based flick. This eventually involves the whole family, starting with vandalism and quickly escalating to animal cruelty and kidnapping, as well as abundant use of the F-Bomb. In addition, there is visual violence such as beatings and an attempted rape, as well as a scene depicting a dog getting shot in the head, which rightfully justifies the Motion Picture Association of America R rating of the film.

On top of that, The New Kids attempts to throw in elements of a teenage coming-of-age tale that is meant to serve as tragedy/heart of the movie, which could have possibly worked, but the principles were either just in their twenties or well into their twenties, which makes it hard to believe these kids are naive, especially Spader’s character. Aside from not quite looking the teen part, everybody involved competently play their parts with Loughlin and Presby’s turn as shell-shocked kids whose lives are upturned by their parents’ deaths, then, get terrorized for nothing by Spader’s turn as the hellbent revengeful junkie Dutra. In addition to the strong cast, an extremely young Eric Stoltz (Fast Times at Ridgemont High 1982, Some Kind of Wonderful 1987) plays Mark, Abbey’s new friend. 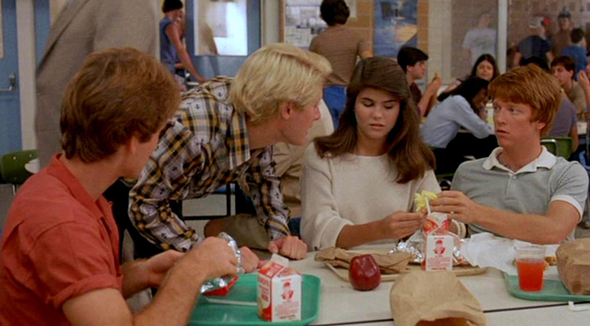 At the time, unfortunately, The New Kids failed to live up to expectations, receiving mostly negative reviews and earning approximately $199,108 its opening weekend with no subsequent numbers recorded, which makes one wonder if the movie was pulled from theaters, because of the bad returns. Nonetheless, because of mis-marketing, or whatever the case may be, The New Kids failed to find its niche until it hit video cassette and even more so later when released on DVD October 4, 2005 with Rotten Tomatoes rating the film 49% “Audience” rating and the Internet Movie Database currently giving it a 5.9/10.

Assuring the film still has life, product placement has kept The New Kids in popular culture with 1987’s Video Violence 2 video and the Ban the Sadists! video series (2005-2006), each with the video case shown in a scene.  As recently as last year, the Pop Culture Beast’s Halloween Horror Picks: Visiting Hours series aired an episode where Ryan Stockstad (Oklahoma Sunshine short 2009, The Bastard Santa short 2015) mentions the film by name, keeping The New Kids relevant and in the movie-watching audience’s eye for the last thirty-one years. 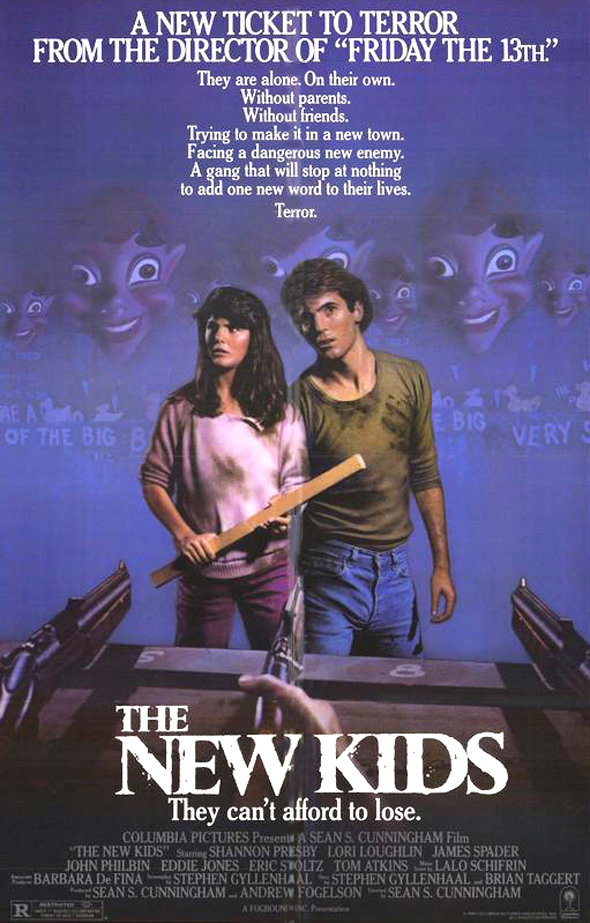 Purchase The New Kids on DVD on Amazon