This week in Horror movie history, Phantom of the Opera: The Motion Picture was released on November 4, 1989 through 21st Century Film Corporation, Columbia Pictures Corporation, Breton Film Productions, and Dee Gee Entertainment. Based on Gaston Leroux’s eponymous novel, the 1989 version was directed by Dwight H. Little (Halloween 4: The Return of Michael Myers 1988, Murder at 1600 1997) and produced with high hopes by Harry Alan Towers (Agatha Christie’s Ten Little Indians 1965, Howling IV: The Original Nightmare 1988). The blood-soaked script was written by Gerry O’Hara (The Bitch 1979, Ten Little Indians 1989) to music composed by Misha Segal (The Last Dragon 1985, The New Adventures of Pippi Longstocking 1988). Supervised by Michael Deak (Pirates of the Caribbean: The Black Pearl 2003, Transformers 2007), the phantom’s special makeup effects were perfected by Kevin Yagher Productions (Child’s Play 2 1990, Sleepy Hollow 1999) while prosthetics were created by Magical Media Industries (Bride of the Re-Animator 1989, Hatchet 2006), two companies who had worked on Nightmare on Elm Street 4: The Dream Master the year before. 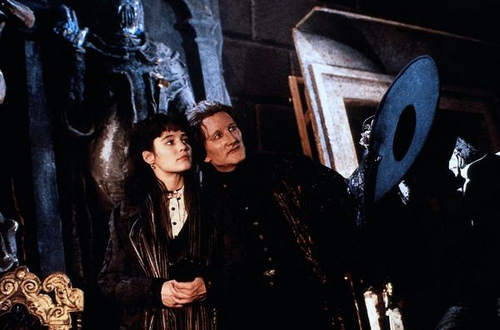 Filmed in New York City, Budapest, and London, The Phantom of the Opera stars Nightmare on Elm Street’s Robert Englund and Jill Schoelen (The Stepfather 1987, Popcorn 1991) as the cat and mouse couple, while Alex Hyde-White (Indiana Jones and the Last Crusade 1989, Pretty Woman 1990), Bill Nighy (Pirates of the Caribbean: Dead Man’s Chest 2006, Harry Potter and the Deathly Hallows: Part 1 2010) and stage actress Stephanie Lawrence (Marilyn the Legend, Evita) play the pawns in Erik’s game. Saturday Night Live!’s Molly Shannon made her film debut in The Phantom of the Opera.

The movie begins in modern day New York City as the beautiful opera singer Christine Day (Schoelen) finds an old piece of music titled Don Juan Triumphant written by Erik Destler, an unfamiliar composer. Through research, she finds that Destler was once accused of the disappearance/murder of a singer he was obsessed with when he had lived a hundred years before. Christine uses the beautiful music to audition for her next role, and during the performance, is knocked unconscious by a falling sandbag, only to wake up in 1881 London as the understudy of the operatic star, La Carlotta (Lawrence), for Marguerite in Faust. She gets a message from the mysterious Destler (Englund) who tells her to keep practicing the part, as she is the only one meant to play Marguerite. Destler then begins a trail of carnage that leaves Carlotta unable to sing and Christine taking her place that night on stage. As the play runs, the scene where Faust signs his soul over to the Devil causes Destler to remember his own experiences with the Devil as he had sold his own soul in exchange for worldwide love of his music. Not satisfied with just his soul, the Devil then disfigured Destler’s face, forcing him to wear his infamous mask.

Despite La Carlotta-loving theatre owner Martin Barton (Nighy), Christine receives a standing ovation, much to the delight of her and her boyfriend, Richard (Hyde-White). A scathing review from Barton’s theatre critic buddy, Harrison (Peter Clapham), sends Christine sobbing to the cemetery to visit her father’s grave. Destler appears as a shadowy violinist and offers her a chance at musical immortality if she will only go to him, which she does. He takes her to his lair in the city’s sewers and reveals his secret, that Don Juan Triumphant is his opera, puts a ring upon her finger and tells her she is his forever. Petrified, she agrees. Investigating his girlfriend’s teacher, Richard goes to the police station, where he learns from Inspector Hawkins (Terrence Harvey) that Destler has actually been alive for centuries, killing, mutilating people, and using their skin to make fresh masks, and that the only way to kill him is to destroy his music. 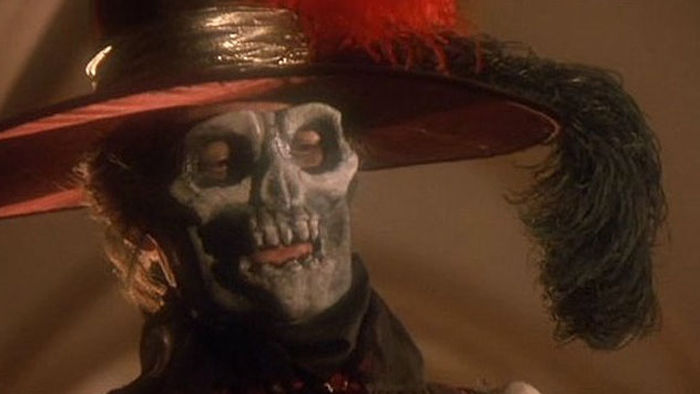 Later, at a masquerade ball, the frantic Christine begs Richard to take her away from the theatre and Destler. In disguise as Red Death, Destler hears her and becomes enraged. He kidnaps Christine and attempts to rape her as Richard, Hawkins, and the rat catcher (Yehuda Efroni) hunt the couple down in the sewers. The Phantom finds the men one by one and kills them horrifically. When he is confronted by Richard, the maniac stabs the man and then sets him on fire, killing him. In the final battle between Hawkins and Destler, Christine breaks a mirror, an act that sends her back to her own time. As she vanishes, she hears the Phantom screaming her name. When she wakes up back in New York, the play’s producer, Mr. Foster, offers her the part and a drink back at his apartment. Foster goes upstairs to change and finds a blemish on his face. The man peels his own skin away and is revealed to be Destler, still alive and even more intent on having Christine. He replaces his skin with another, synthetic mask. The singer finds a copy of Don Juan Triumphant as she waits downstairs and makes the connection between Foster and Destler. At first, she plays along, but then rips away the Phantom’s facial skin, stabs him and escapes. As she runs, she tears the opera into bits and drops it into the gutter. In the distance, she can hear Destler screaming. Christine walks home, and on her way, passes a street violinist playing Don Juan Triumphant as he follows her. Christine realizes Destler will never truly be gone.

There are similarities and differences between the 1989 film and the novel itself, although it is much more faithful to the book than previous adaptions, such as the 1925 film and Andrew Lloyd Weber’s musical. The most notable similarity is not only in the Faustian subplot that came about from Erik’s deal with the devil, but also in the sadistic, fiendish traps he set, making him a much less sympathetic character than in prior versions. This modern rendition of the old tale is much gorier than Leroux originally intended, with the phantom using a covering of stitched together human skin instead of the original black mask, all to hide a face burned by the devil rather than being born with a birth defect. Surviving novel characters are killed off, including Carlotta, Richard (Raoul in the book), and even the Rat Catcher. This was also the first version not to feature the falling chandelier – not for artistic reasons, but because 21st Century Films did not have the budget for an expensive chandelier to be bought and then destroyed.

The film was originally rated X by the MPAA, but, after heavy editing, finally passed with an R rating. Scenes now missing are of Erik flaying Joseph the stagehand, Carlotta’s death, and extended takes of the killing of the three thieves and Harrison’s death in the sauna room. Ranked sixth at the box office for the first week of November in 1989 and grossing just under four million dollars, the film was a financial failure. Rotten Tomatoes give the film mostly negative reviews, giving it a score of 38% rotten. The planned sequel was quashed after the poor box office take. In 1991, Fangoria magazine reported that the script planned for the Phantom sequel, called Terror in Manhattan, was retitled and restructured into Dance Macabre, a stand alone film released in 1992, although the film still starred Robert Englund. A Blu-ray was finally released on February 17, 2015 through Scream Factory, a disc that includes the documentary Behind the Mask: The Making of The Phantom of the Opera, here jokingly referred to as Freddy: The Musical. 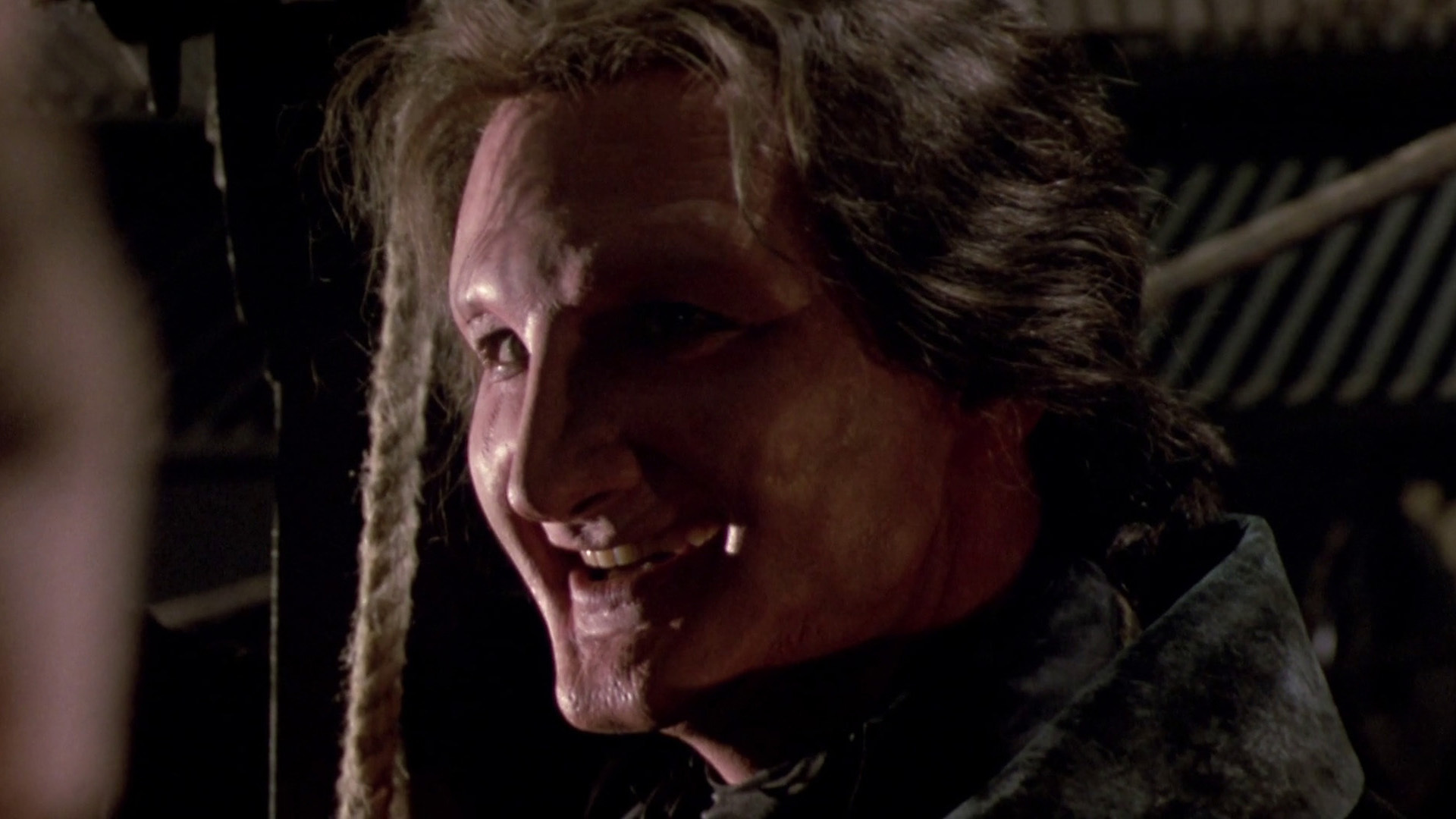 This modern retelling of Gaston Leroux’s novel satisfies even the most bloodthirsty gorehounds while keeping the helpless, suffocating atmosphere that Phantom fans have grown to love. Although Segal did win the Brit Award for Best Soundtrack in 1989 for his work on the film, the score is utterly unrecognized by many Horror fans, a travesty as the entire arrangement, especially Erik’s own piece, Don Juan Triumphant, is a masterpiece in musical composition. One does not need to be a fan of the Opera to appreciate both the score and the heartbreaking tale of The Phantom of the Opera. 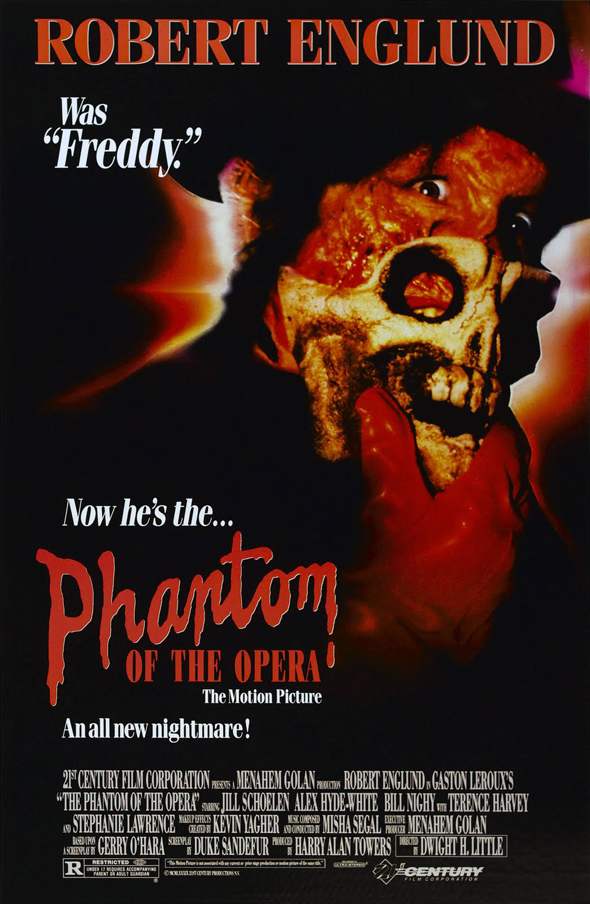 Purchase Phantom of the Opera: The Motion Picture on Blu-ray/DVD on Amazon