This week in Horror movie history, back on April 17, 1980, The Watcher in the Woods had a limited released in the US by Walt Disney Productions and distributed by Buena Vista Distribution. This dark children’s movie was directed by John Hough (Escape to Witch Mountain 1975, American Gothic 1988) and produced by Ron Miller (The Fox and the Hound 1981, TRON 1982). The screenplay credit is shared by many, what with all of the ending rewrites, and includes Brian Clemens (Avengers TV series, Highlander 2: The Quickening 1991), Rosemary Anne Sisson (The Wind in the Willows 1984, The Black Cauldron 1985), Gerry Day (The Black Hole 1979, Dennis the Menace TV series) and Harry Spaulding (House of the Damned 1963, Witchcraft 1964), all based on the novel by Florence Engel Randall. 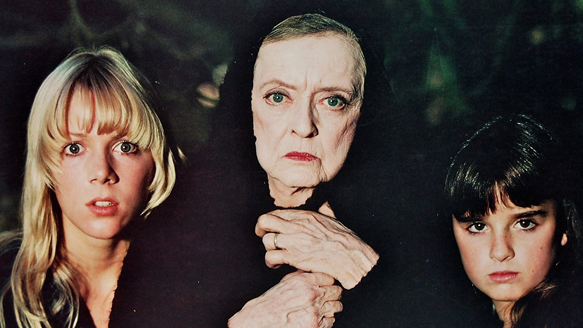 Filmed in and around Buckinghamshire, England and at Pinewood Studios, The Watcher in the Woods stars Bette Davis (All About Eve 1950, Whatever Happened to Baby Jane? 1963), figure skater Lynn-Holly Johnson (Ice Castles 1978, For Your Eyes Only 1981), and Kyle Richards (Halloween 1978, Little House on the Prairie TV series), while NCIS’s Dr. Donald “Ducky” Mallard (David McCallum) plays the patriarch of the family. Music for the movie was composed by Stanley Myers (The Deer Hunter 1978, The Witches 1990) and the special effects were done by John Richardson (Aliens 1986, Harry Potter and the Sorcerer’s Stone 2001). The house that John Keller lived in also served as Hill House in Shirley Jackson’s The Haunting (1963). The film was rushed to theatres in an effort to coincide with Bette Davis’ 50th anniversary as a film actress and the original effects suffered for that, debuting with an ending that was “laughed off the screen” according to Hough, so the film was pulled and the ending reshot and redistributed a year later, directed by Vincent McEveety instead of Hough. According to union rules, McEveety did not work on the film long enough to be officially credited as a director.

The movie starts off with the Curtis family driving around the English countryside with their Real Estate agent (Eleanor Summerfield), looking for a suitable house to rent. They find a gorgeous manse for very cheap, but with stipulations – the owner, the octogenarian Mrs. Aylwood (Davis) must approve of them, and she will also reside in the tiny guest house on the property with whomever she chooses as tenants. When Mrs. Aylwood sees older daughter Jan (Johnson), she looks like she has seen a ghost, yet immediately allows the family to move in. Things get weird as Jan starts seeing a washed out, blindfolded girl in lieu of her mirror reflection. As an invisible entity watches from the woods, clues lead Jan and her new friend and neighbor, Mike (Benedict Taylor), to solve the mystery surrounding the house. The disappearance of Mrs. Aylwood’s daughter, Karen, thirty years previous leads Jan to believe a ghost haunts the property, and the frequent dreams and hallucinations of Jan’s little sister, Ellie (Richards) seem to support this.

As time goes on and Karen continues to beg Jan for help through the mirror, Jan, who looks strikingly like the missing girl, realizes that there is more to the story and enlists Mike to help her find the deeper story. They ask the three other teens that were there the day Karen vanished. Now adults, each one tells a little more of the story of the girl’s disappearance. The full tale finally comes to light – when they were children, the group had gathered in an old church during a solar eclipse. Tom (Richard Pasco), Mary (Frances Cuka), and John (Ian Bannen) had wanted Karen to join their secret club. As initiation, they had the girl stand completely still on an old coffin while blindfolded as they linked hands around her. A sudden summer storm at the moment of the eclipse sent a lightening bolt to the top of the chapel towel, setting the building on fire and causing a church bell to drop on the place where Karen had been standing. As the bell dropped, John turned to see Karen had already disappeared before the bell had hit the floor. Karen, or her body, had never been found. With another solar eclipse only moments away, Jan convinces Mary, Tom, and John to reenact the initiation with her acting as Karen as a way to find the answers they all seek. They are reluctant, but willing to find out the answers behind Karen’s disappearance and agree to perform the ritual. As the sun eclipses the earth and the three link hands, John repeats the words he had memorized thirty years before, and a glowing white light appears. Behind the light is Ellie, now possessed by an otherworldly entity. In the alien’s voice, she exposits that a switch was made during the last eclipse, and Karen and this being were swapped interdimensionally. The ghostly happenings in the woods had actually been this invisible alien creature trying to find a way back home, while Karen had been stuck in limbo in this other dimension. As the light comes forward and envelopes Jan, Mike breaks the linked hands of the elders just as the eclipse ends. Jan falls to the floor, and Karen appears in the same place she had disappeared, blindfold and all. As Mrs. Aylwood enters the old church, Karen pulls off her blindfold. “Karen, you’re home,” she says as the credits roll. 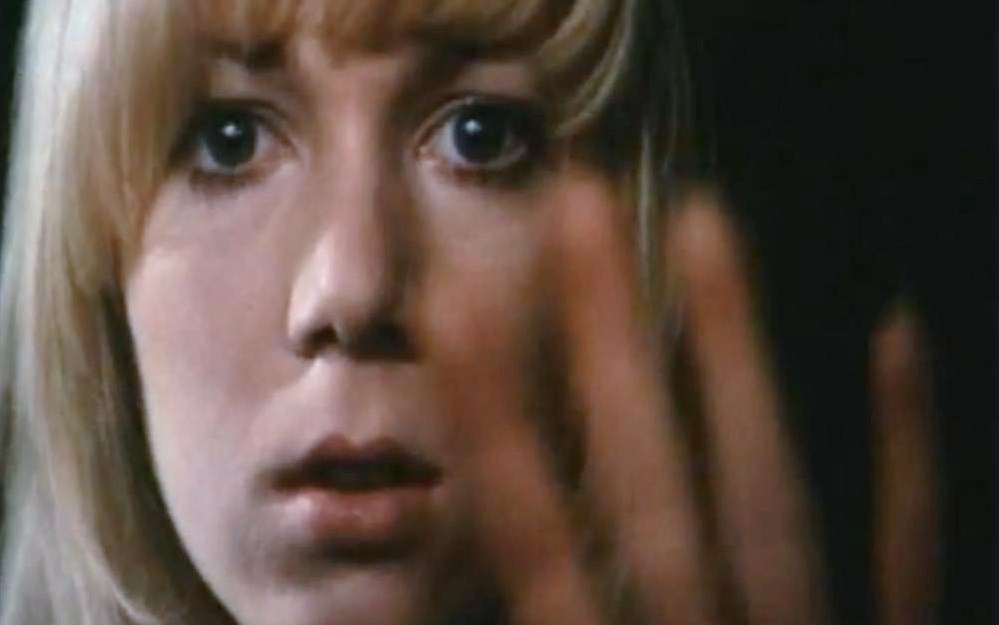 With a Rotten Tomatoes rating of 46% rotten, the film seems misunderstood by current movie critics. Only those traumatized by that initial blind viewing can understand the fright associated with this movie. Another film that falls under this veil is The Blair Witch Project (1999), a flick that scared the bejeezus out of those who viewed it as true found footage, while others who watched later under the understanding that the entire “true” story was faked never got the same fear factor. Watcher in the Woods was nominated for a Saturn Award for Best International Film in 1982, while Kyle Richards was nominated for both a Saturn Award  for Best Supporting Actress and a Young Artist Award  for Best Young Motion Picture Actress in 1982 for her portrayal of Ellie Curtis.

There have been several alternate endings for The Watcher in the Woods. The initial 1980 ending was very vague with no real explanation for Karen’s disappearance, so Disney pulled the movie and reshot it with an actual alien that appeared to take Jan to Karen in his spaceship, the ending that was laughed out of the theatres. The studio finally settled on something in the middle, the ending that is now considered the actual outcome and directed by McEveety. Although an urban legend still circulates that there is yet another, even darker ending, this is not true. The beginning credit sequence was also reshot, since Disney considered it too dark. The initial scene had a little girl in the woods being scared by the Watcher. The girl dropped her doll and ran away. As the doll fell through the air, the Watcher zapped it and it burst into flames. The credits then rolled over the dolls melting face. All three endings can be seen on the April 2002 Anchor Bay DVD release, along with an audio commentary from Hough, three theatrical trailers, a TV commercial, a twenty page booklet, and the movie’s original poster art. This release is currently out of print, while the August 2004 Walt Disney release is available, although it contains only the alternate endings and trailers, and none of the other extras. 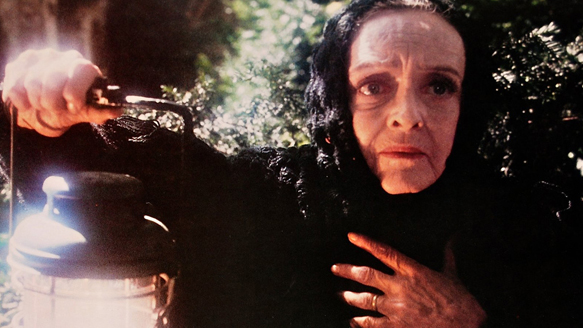 As one of the creepiest films ever to carry the Disney logo, The Watcher in the Woods scared many a kid back in the ’80s. With both parents and schools alike thinking this was a safe, innocent movie to let their children watch without preview, children were freaked out from one side of the country to the other as they witnessed a near drowning, ghosts, aliens, and possessions. Just about anyone who grew up in the early 1980s has a story of how they were scared to death by a viewing of this Disney cult classic. In an effort to break away from light family fare, Disney had produced films such as TRON (1982) and The Black Hole (1979), and The Watcher in the Woods was one of their experiments in that decision. Unfortunately, the public was not made aware of this change, so seeing a Disney label was enough for them to believe a movie would be wholesome and trustworthy. The initial viewing on television during an 8 PM timeslot on a Tuesday did nothing to prepare them for the spooky, supernatural tale they were about to view, leaving children and adults alike scarred and a bit mistrustful of the Disney name. Horror lovers now wax nostalgia on the film that may have started that scary movie obsession. 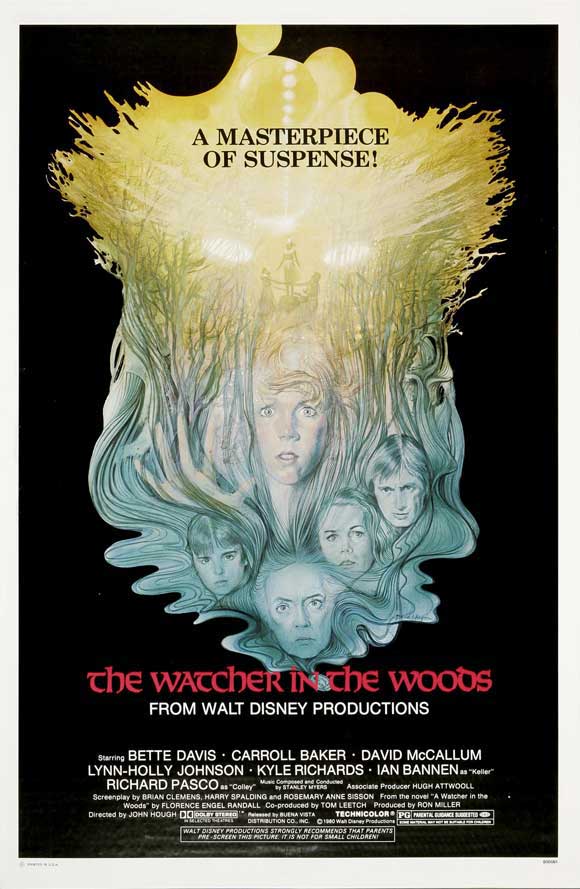