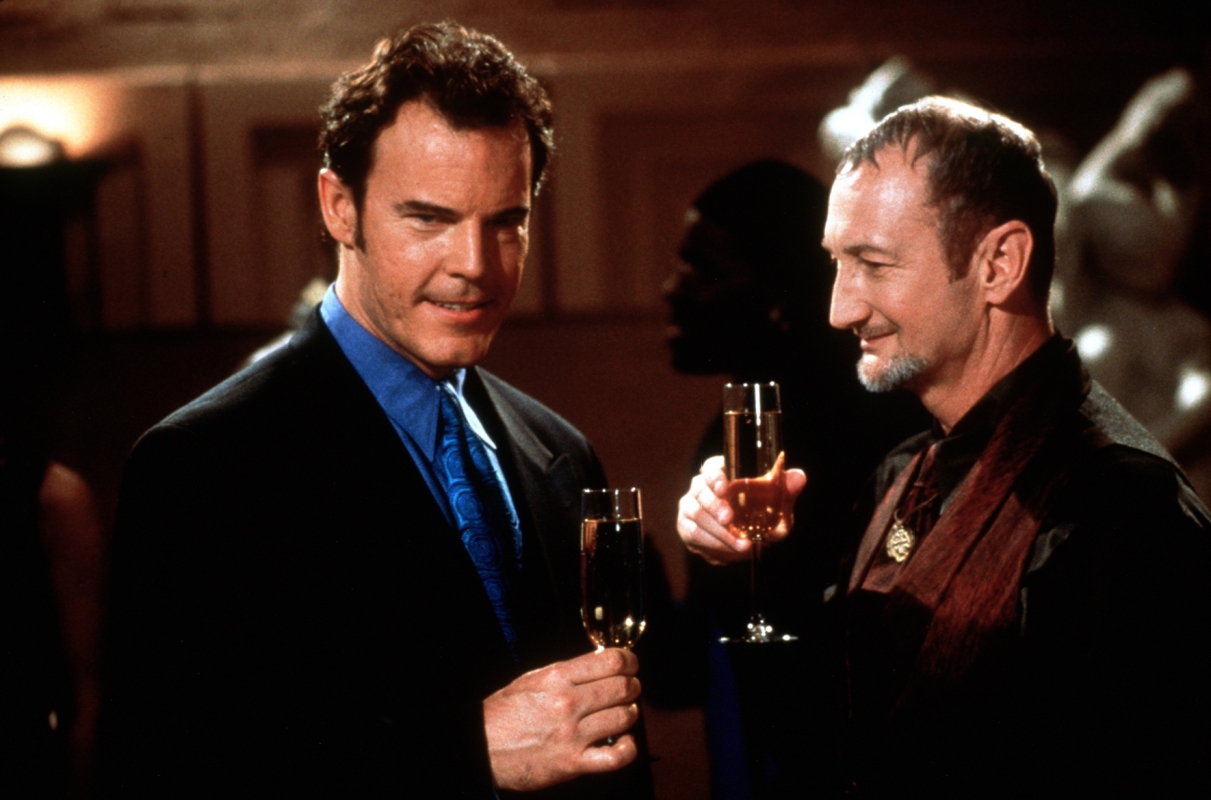 The movie begins as a narrator (Scrimm) explains, “Once, in a time before time, God breathed life into the universe. And the light gave birth to Angels. And the earth gave birth to Man. And the fire gave birth to the Djinn, creatures condemned to dwell in the void between the worlds.” The Djinn can be awoken and has the ability to grant the Waker three wishes. The third wish is all the Djinn needs to release hordes of his own kind onto the Earth. In Persia, in 1127 A.D., a King (Richard Assad), with the Djinn (Divoff) at his side, makes a second wish for wonders never seen, and gets a holocaust of death in his court as men and women are mutilated and slaughtered mercilessly. The King’s sorcerer, Zoroaster (Ari Barak), manages to trap the Djinn in a fire opal before the King can make his third wish.

Fast forward to the present, where Raymond Beaumont (Englund) is having a boxed, antique statue of Ahura Mazda lifted by crane from ship to dock. Within two minutes, the drunk crane operator has dropped the statue onto Beaumont’s assistant, Ed Finney (Raimi), squashing him like a bug. The box and its contents are destroyed, but the statue’s fire opal is intact, and it is stolen by Trace Atkins the dockworker. The opal finds its way to Regal Auctioneers, where Alex Amberson (Lauren) appraises it, an action that wakes the Djinn inside. Seeing nothing but the jewel, Alex leaves the gem with Josh Aickman (Tony Crane) so she can go coach her girls’ basketball team. As he sends it through a thermal imaging machine, the opal explodes, releasing the mini Djinn (Verne Troyer) into our world. A mortally wounded Josh wishes for relief from his pain, and as the Djinn kills him horribly, Alex sees flashes of the crime. He makes his way through the city, granting wishes in the most horrible ways, all the while growing stronger, before finally breaking into a morgue and taking on the form of a dead man named Nathaniel Demerest (also Divoff). 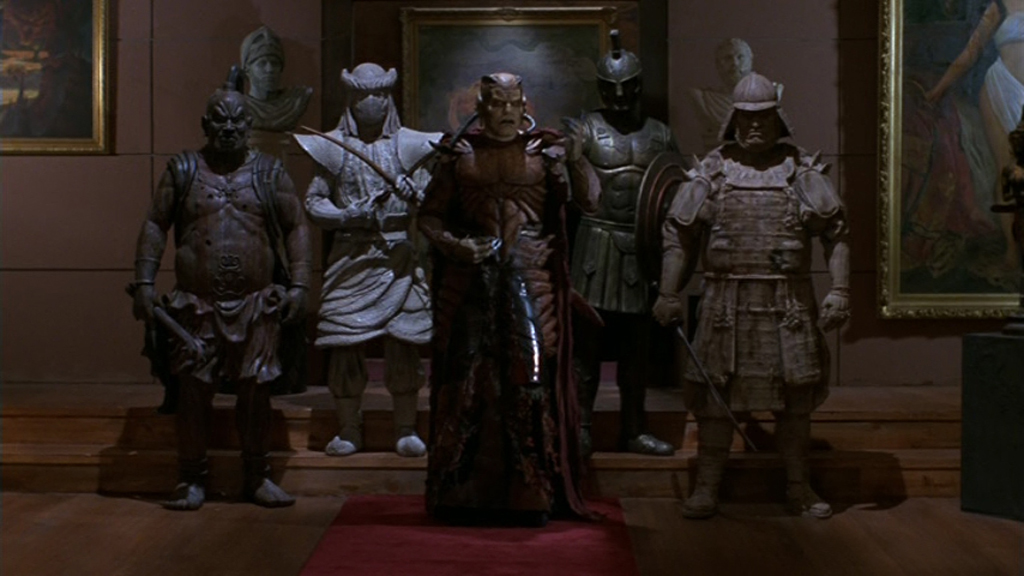 Through folklore professor Wendy Derleth (Jenny O’Hara), Alex learns the history of the Djinn and his gem. She also learns that the souls that he collects by granting wishes will be used to power the gem. Once the gem is revved up, he will grant Alex three wishes, which will open the gateway and release the rest of the Djinn onto the earth. Later, when she goes back to Derleth, she realizes that the woman she is talking to is actually the Djinn in the professor’s form. He offers her the three wishes and even gives her a sample, test wish. She tries it out by wishing the Djinn would kill himself. He shoots himself in the head with a gun but the wound heals instantaneously. Done with her sample wish, Alex wishes to know her opponent. He sends her to his world inside the gem. Terrified, she uses her second wish to get back home.

Alex remembers her sister, Shannon (Wendy Benson), is at Beaumont’s Ahura Mazda party and rushes over there. The Djinn, once again disguised as Nathanial Demerest, follows. Beaumont is tricked into making a wish for an unforgettable party. Once again twisting the wish around, the Djinn makes the stone and marble statues in Beaumont’s collection come alive and slaughter everyone at the party. As people run around screaming, the Djinn corners Shannon, trying to force Alex into making a third wish to save her sister. Instead, Alex wishes the crane operator had not been drunk at work, reversing time and resetting the events so that the statue remained whole and the opal was still trapped inside, along with the evil Djinn. Everyone killed by the Djinn is now alive, including Josh and Beaumont’s assistant, Ed. To Josh’s amazement, Alex asks him out on a date. Inside Beaumont’s gallery, the complete statue of Ahura Mazda sits on its pedestal, and the Djinn sits on his throne deep inside the fire opal, waiting for his next chance to break free. 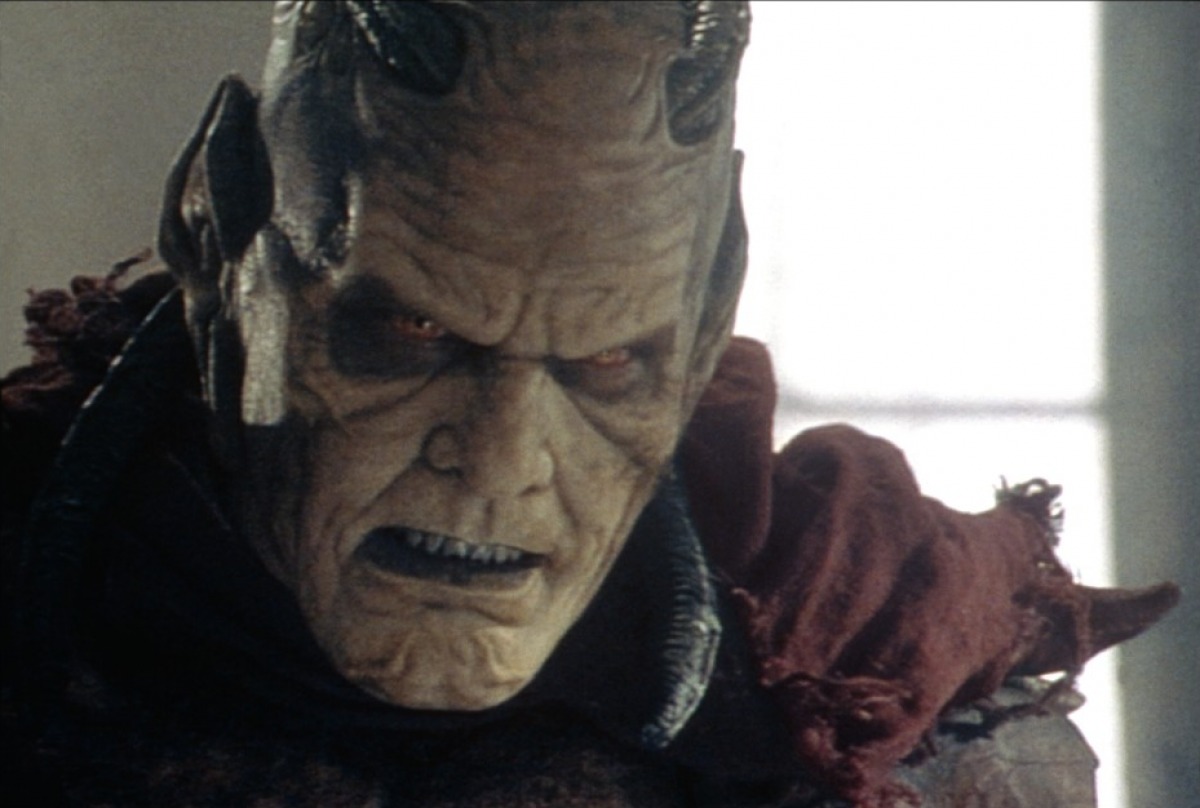 If one looks closely at the statues in Beaumont’s collection, they will see a familiar sight – the winged figure of Pazuzu, the demon from The Exorcist (1973), as it stands off to the right of the room. As an homage to an homage,  Kurtzman used a trick he learned from Fred Dekker in Night of the Creeps (1986) and gave many of the characters in Wishmaster surnames that reference popular Horror and Fantasy writers, such as Charles Beaumont, Jack Finney, Dennis Etchison, Douglas Clegg, August Derleth, A. Merritt, Fritz Leiber and Robert Aickman. Kurtzman took his five million dollar budget and created a film that made over fifteen million dollars at the box office, a decent take, although Rotten Tomatoes only gives the film a score of 21% rotten. The film spawned three direct-to-video releases, starting with Wishmaster 2: Evil Never Dies (1999), which was directed and written by Jack Sholder (Nightmare on Elm Street 2: Freddy’s Revenge 1985, The Omen 1995) with Divoff reprising his role as the Djinn. Next were Wishmaster 3: Beyond the Gates of Hell (2001) and Wishmaster 4: The Prophecy Fulfilled (2002), both directed by Chris Angel, but this time with John Novak playing the Djinn. As one of the first movies portraying the Middle Eastern Djinn as an evil entity and not a pleasant genie trapped in a bottle, Wishmaster gave Horror fans a whole new creature to fear, a talent Wes Craven fans know all about. 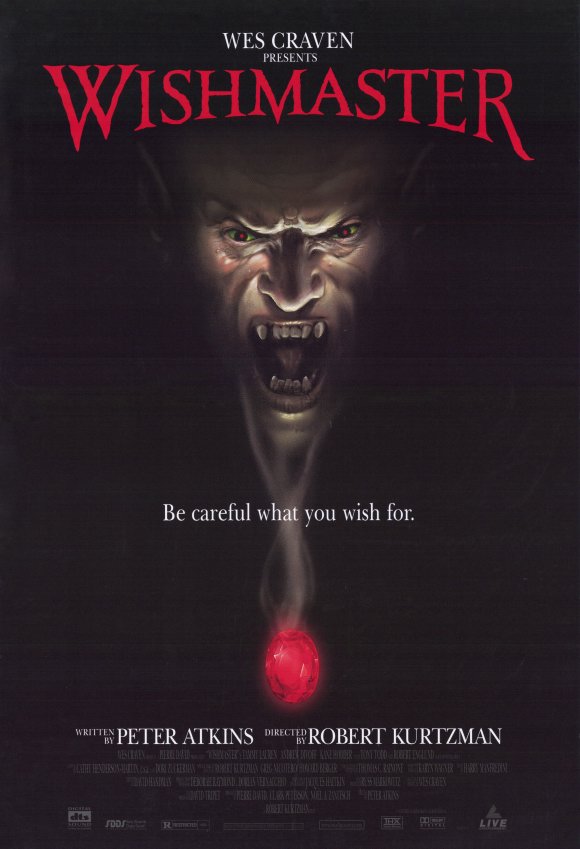 Purchase Wishmaster on DVD on Amazon