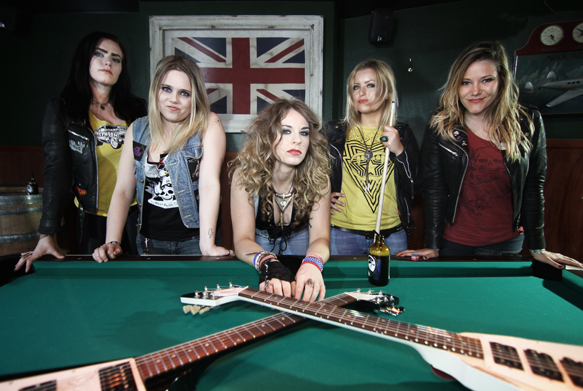 History has shown Rock-n-Roll to be primarily a male dominated genre of music. However, over the past decade, a rise in the numbers of female acts entering into the once boys only club has helped change that imbalance nicely. As a result, the female acts coming up in the industry, or who have been a part of the scene for years, are making big waves by creating some of the best albums out there.  With that said, when it came to creating music and wanting to live out her Rock-n-Roll dream, Swede Guitarist Flippa Nassil decided it would be best to relocate to the capital city Stockholm in 2010. Having formed the band Thundermother, she went looking for like-minded individuals that had the same drive and ambitions. What Nassil found would be  another guitar player by the name Giorgia Carteri from Italy. The two would go through a number of musicians/singers until they found the perfect fit with Irish singer Clare Cunningham, Tilda Stenqvist (drums), and Linda Strom (bass).

Now, with the core of Thundermother rooted in, the band hit the road to tour, making a name for themselves. Sharing the stage with the likes of Opeth, Motörhead, and In Flames, not to mention have played the festival circuit especially overseas, Thundermother was making big waves. Finally, after touring non-stop, the band entered the studio to record their 2014 debut album, Rock N’ Roll Disaster. The record would wind up on the Swedish national charts, coming in at number two. Following the success of their debut album, the band quickly decided to head back into the studio to record again, and put together the record Road Fever. Recording a few songs at Lemon Studios in Klippan with Martin Ekeland, the rest of the album would be recorded at Cobra Studios in Stockholm, to work with Martin Ehrencrona (engineer), as Nassil would act as producer. Looking to make a push toward North America, Road Fever was released on January 29, 2016 domestically via Despotz Records, and Americans are in for a treat.

Road Fever starts out with the band’s current single, “It’s Just a Tease,” and from the moment the song begins, listeners hear guitar strumming before another guitar plays a solo, followed by steady bass and drums parts. When Cunningham comes in to sing, one cannot help but be blown away by the power of her voice; think Lzzy Hale of Halestorm meets Sass Jordan. It is a fast-paced and catchy tune that continues through to another killer guitar solo, making it a great way to start the album. Next is “FFWF,” which means “Fight Fire with Fire.” Here, Stenqvist provides a steady drum beat that continues to dominate as the lead instrument throughout the song. Coming in, Strom accompanies her as the song progresses with a strong bass presence before Nassil and Carteri provide dueling and solo guitar parts, as Cunningham provides her strong vocals in a true Rock-n-Roll rebellious manner. “Alright, Alright” has all the makings of what a great Rock-n-Roll song should be with in your face, growling vocals remnant of Joan Jett, yet Cunningham has her own style. Roaring guitars and solos, mixed with a strong percussion section, will have the listener raising their fist in the air with the music.

Bringing on a Punk-like vibe is “Deal with the Devil,” with all instrument playing in unison throughout most of the song until in the middle when an amazing guitar solo is provided. Cunningham shows off her vocal chops once more by providing some higher range singing. Those who are a fan of Van Halen or Motörhead will love this track.  Then, “Give Me Some Lights” features a roaring chorus of “Give me some lights, give me some smoke, give me a stage to move on.” An anthem about living the life of a Rock-n-Roll lover and performer, with a tight overall performance and added guitar solo in just the right spot, this song a definite sing along. The next two tracks off Road Fever are “Road Kill” and “Enemy,” both which possess the feeling of provoking one to want to roll down their window for long ride with the stereo blaring loudly. Furthermore, both cuts have a Classic Rock base with steady tempos and astounding vocals.

Moving the record right along, a song that shows off Cunningham’s more emotional vocal edge is “Vagabond.” Beginning with strumming guitar, which then turns into Nassil and Carteri providing beautiful and powerful dueling guitars, this continues throughout the song. The track has a hint of sadness in the music, yet comes across with inner strength. It is also here Strom and Stenqvist conjure up another strong performance of playing off one another. Then, one of the most unique and fun songs on the album is “Thunder Machine.” Starting out with a familiar buzz, well at least for those who have ever gotten a tattoo, the music plays on with a Country Rock feel. As Cunningham begins her singing, listeners will realize this song is about getting a tattoo and how great it is. Complemented by a breakdown midway through, drums and a picking solo guitar project the sound and the familiar tattoo machine buzz occurs. Finally, ending the album, in true female supporting female style, is the third single, “Rock n’ Roll Sisterhood.” It is here the band is asking all the female Rock lovers and musicians out there to follow them while they look to dominate the Rock world and have some fun along the way. Truly embracing the philosophy Thundermother has kept from day one, they love the music and do not take things too seriously.

Thundermother’s Road Fever has set the standards high, not only for female, but male bands/artist in the Rock industry. With their unique retro style, yet maintaining a sense of the traditional Rock sound, the band is well on their way to more success. In addition, Thundermother seems to have found Cobra Studios to embody their sound and its 1970s Rock vibe mixed with using original gear that created an experience and an album nothing less than amazing. Embracing the lifestyle of having fun and living the passion of their music, the band will continue touring and pushing forward in hope of worldwide Rock domination. CrypticRock gives Road Fever 4.5 out of 5 stars. 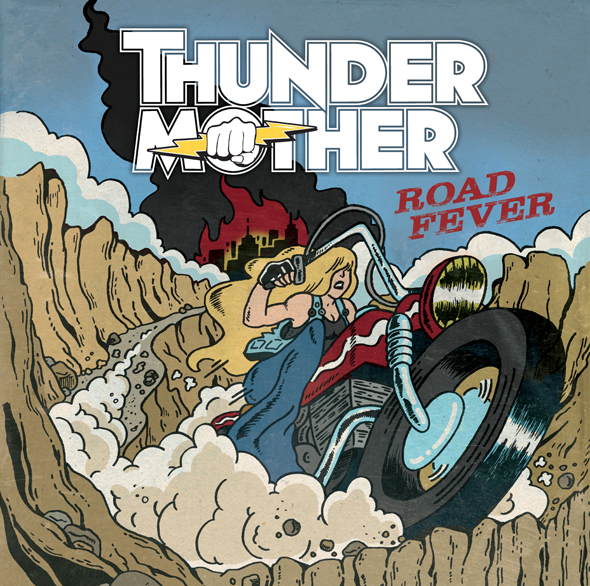